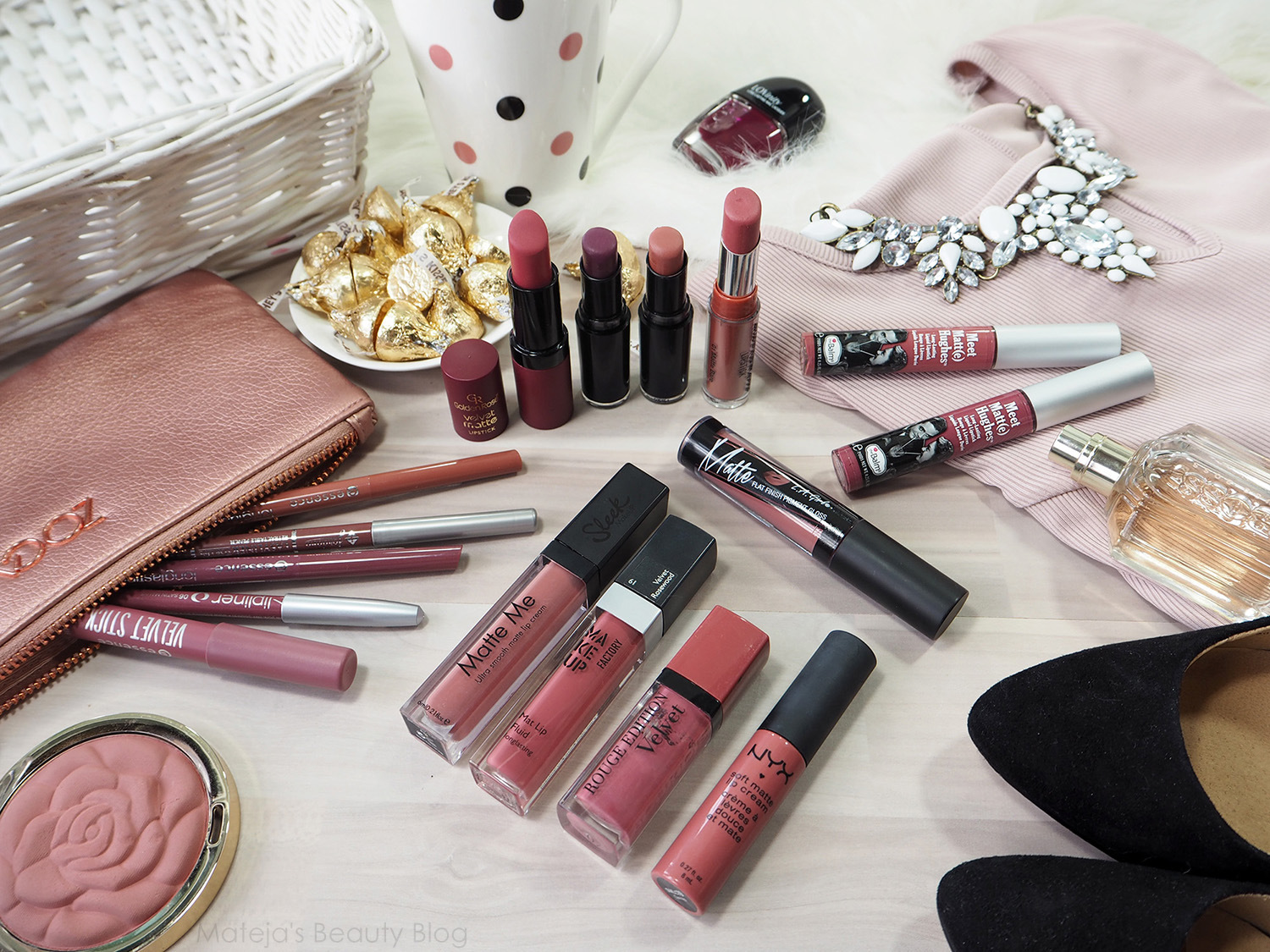 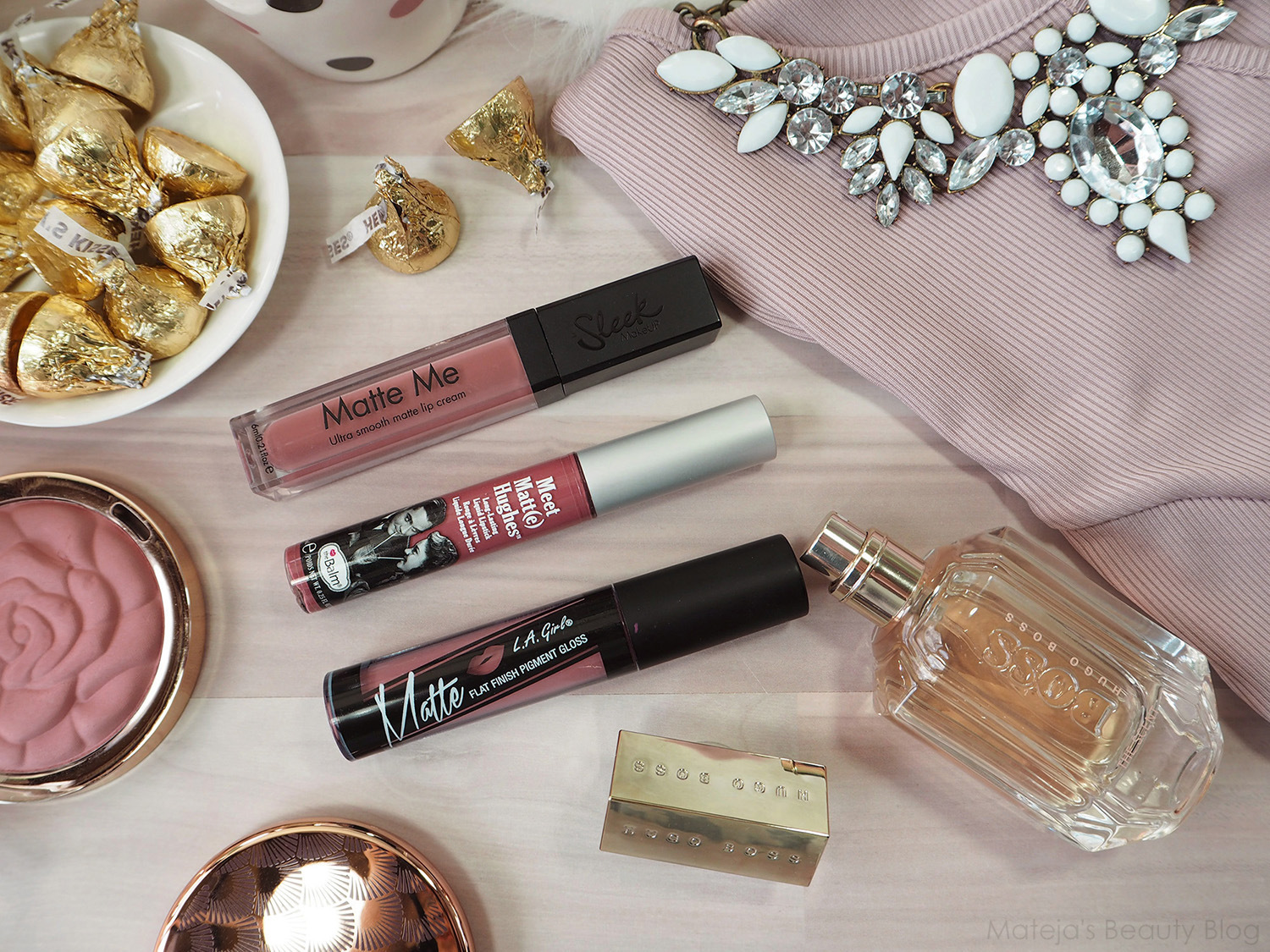 SLEEK Matte Me Lip Gloss
Birthday Suit
Not saying that 90’s trend is all about matte lip colours, but they are certainly prevailing and Birthday Suit definitely gets you that perfect “instagram matte” finish. It’s a shade that changes with time as it oxidises, also you should bear in mind that like most of the shades on this list, it looks different on each individual, so don’t rely just on my swatches and google for more, but on me it’s a brownish medium nude shade with some rosy and mauve tones, which make it more modern looking. It’s one of the earliest matte liquid lipsticks meaning the formula has some room for improvement, though to me it’s fine, but it can feel tight and drying. The texture at application is very oily and the clumsy, big applicator doesn’t make it easy to apply it nicely, but after about 2-3 minutes, it sets to a matte finish.
THEBALM Meet Matt(e) Hughes
Committed
This is my favourite formula of matte liquid lipsticks and Committed is one of my all-time favourite shades too. The formula is very pigmented, dries in a few minutes to a perfect matte finish, but it’s not uncomfortable, it’s incredibly long-lasting, doesn’t transfer or smudge and fades nicely. Committed is a difficult colour to describe, theBalm says it’s a pinky nude, but it’s so much more than that on me, as it definitely has a bit of peachiness to it, so it’s a bit like throwing pink and peach plus a bit of mauve in a blender, but keeping the shades very muted. 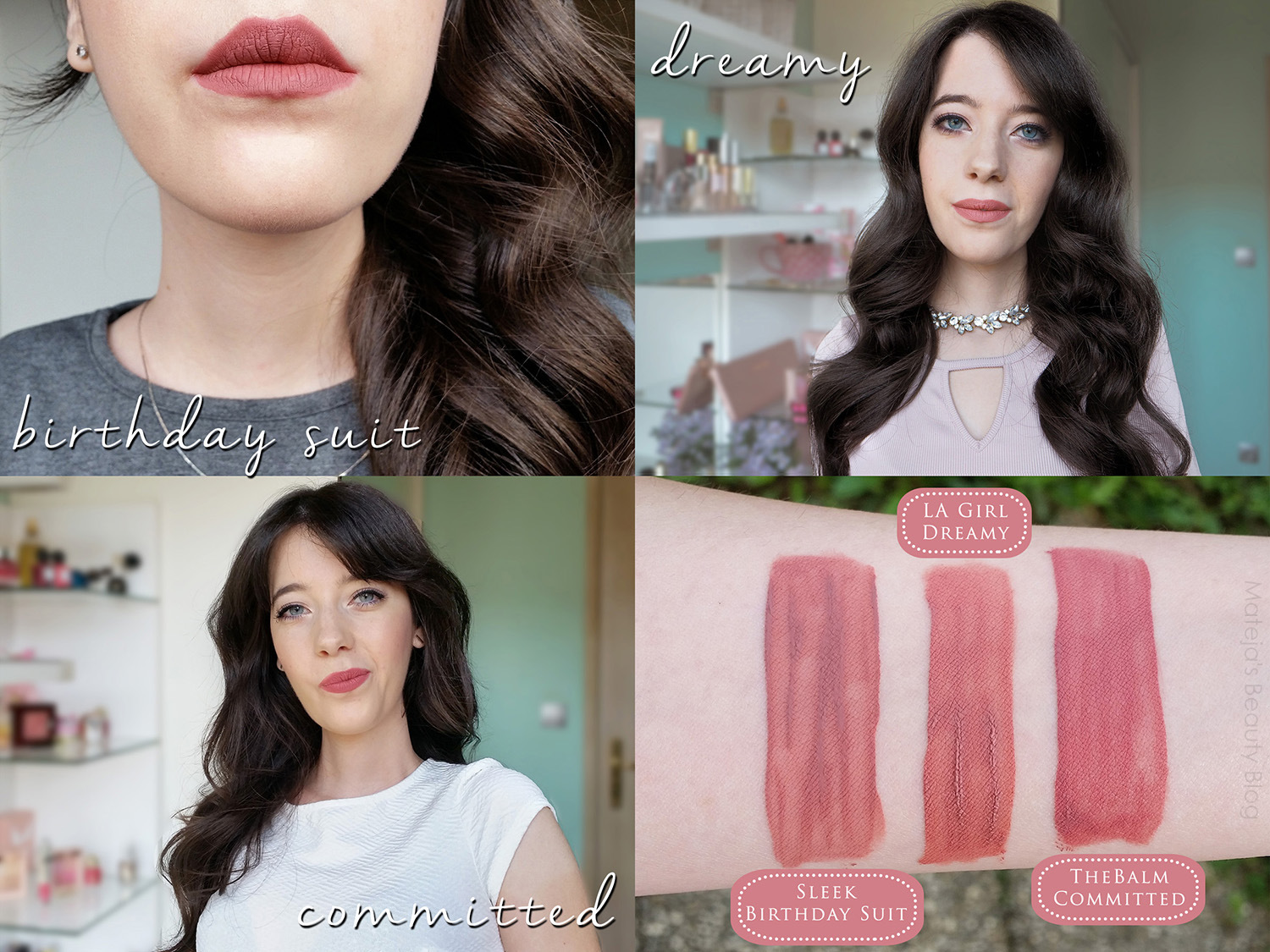 L.A. GIRL Matte Flat Finish Pigment Gloss
Dreamy
Dreamy is a shade that is between Committed and Birthday Suit with the main difference being that it’s the peachiest. Some people love the formula, some hate, I find it’s ok, but most matte lip products work for me. If your lips are often dry, this won’t be for you, but if you’re like me, these are just fine. 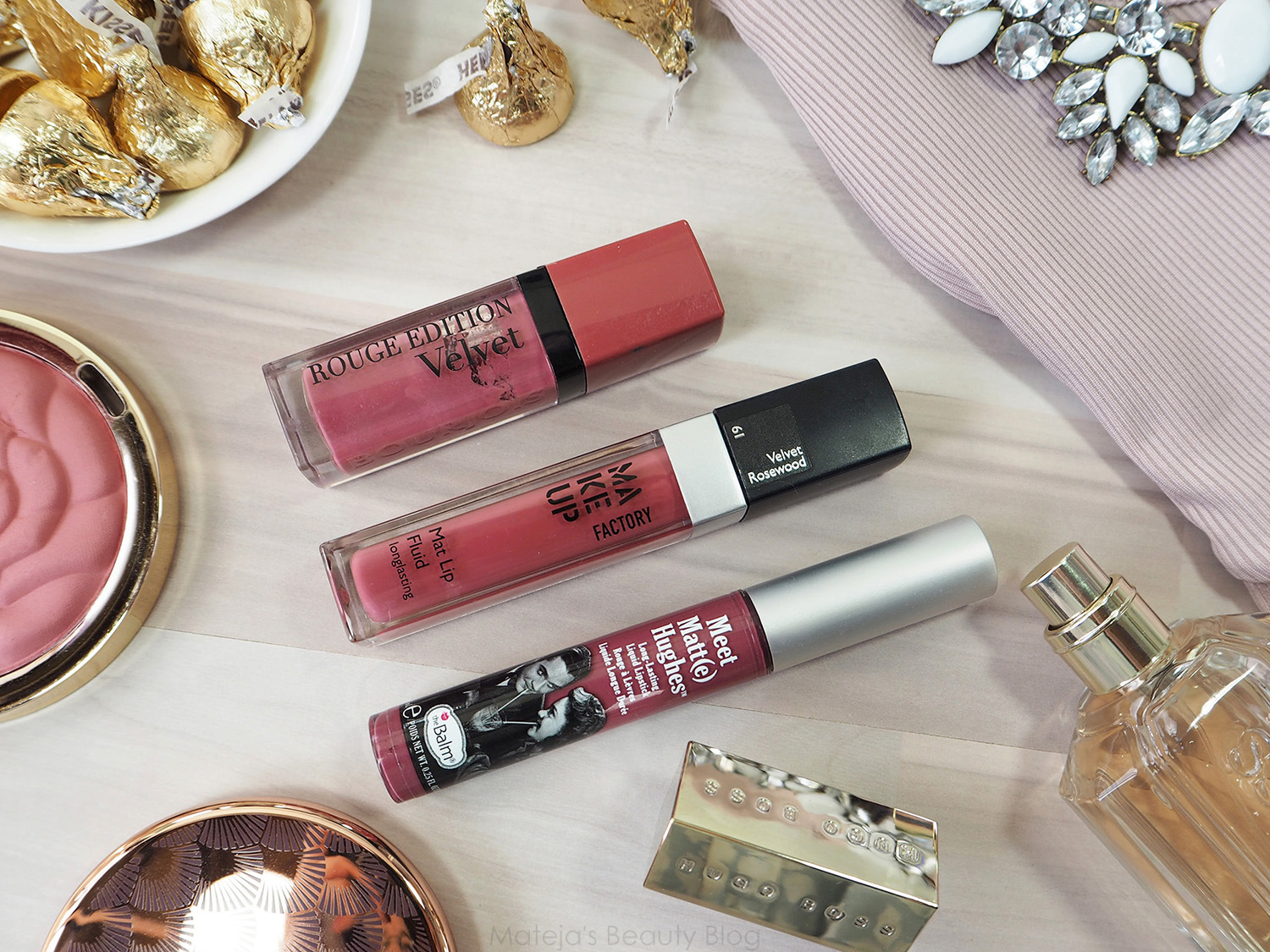 BOURJOIS Rouge Edition Velvet
07 Nude-ist
My favourite shade ever, though technically, it’s not a typical 90’s shade and it’s already more vibrant than the rest and it can look quite bright on some people. It’s a muted warm rosy shade that has enough pinky tones to lift the complexion, but still looks natural enough on the lips. The formula of this shade is so far the best I found among Velvet’s, the rest are more mousse-y and less pigmented, however, it takes longer to set to a nice matte finish, yet it lasts pretty well one the lips.
MAKEUP FACTORY Mat Lip Fluid
61 Velvet Rosewood
Velvet Rosewood is one of the darkest such shades I own and it’s muted warm rosy, slightly brownish shade with a proper mate finish, so it’s more like the warm equivalent of the mauve shade they have in their selection (that one looks completely purple on me). It’s darker than Nude-ist or Golden Rose Velvet 12, but lighter than theBalm’s Charming. 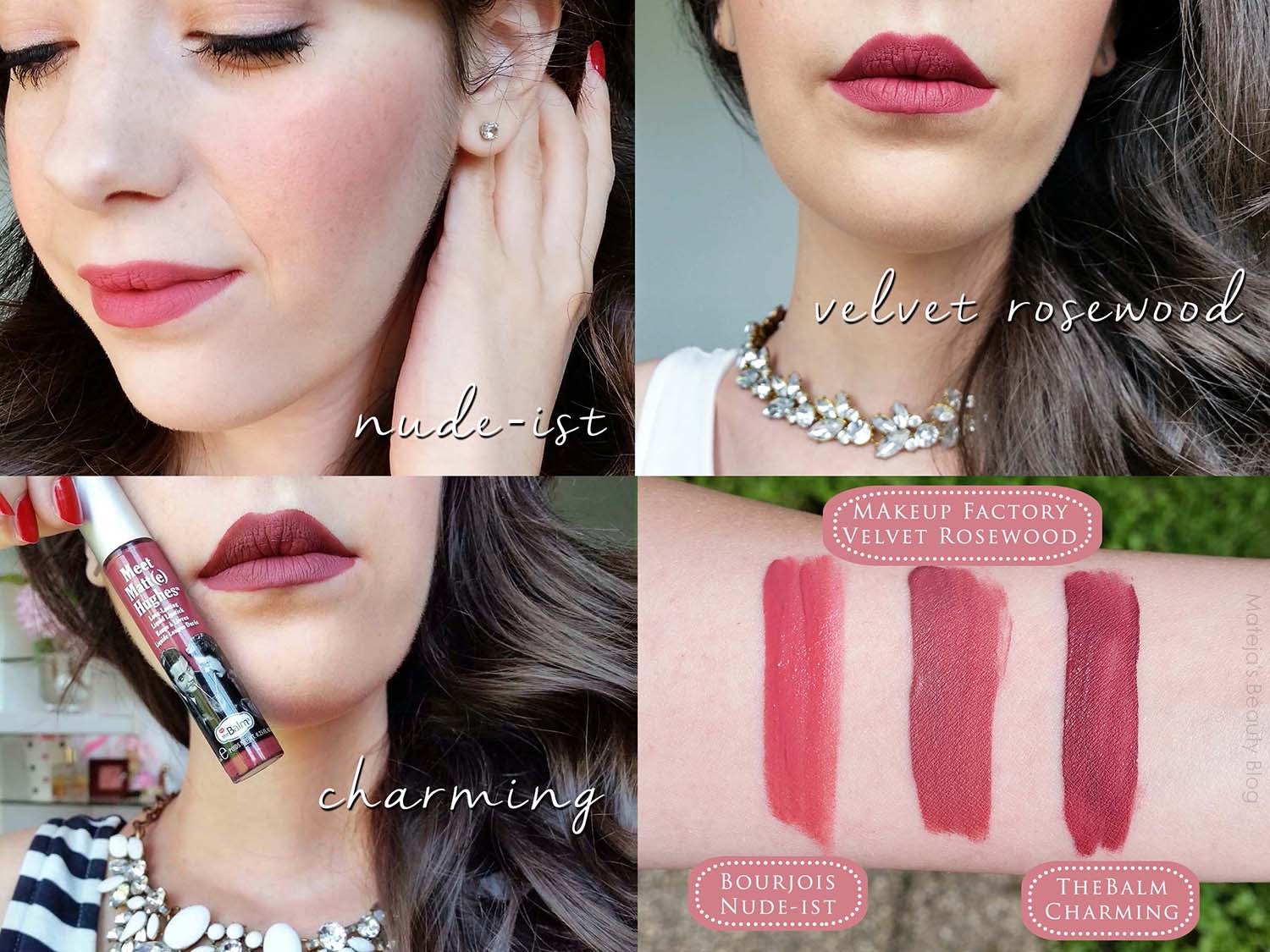 THEBALM Meet Matt(e) Hughes
Charming
The darkest shade on this list and on me it’s more of a grunge type of colour. It’s similar to Velvet Rosewood, but a bit less warm and a shade darker. As I said at Committed the formula of these is amazing – properly matte, long-lasting and very pigmented. These also smell like After Eight, so like mint and chocolate, plus they tingle slightly at application for that plumping effect. Similar shades include Colorpop Bubble and Milani Beloved. 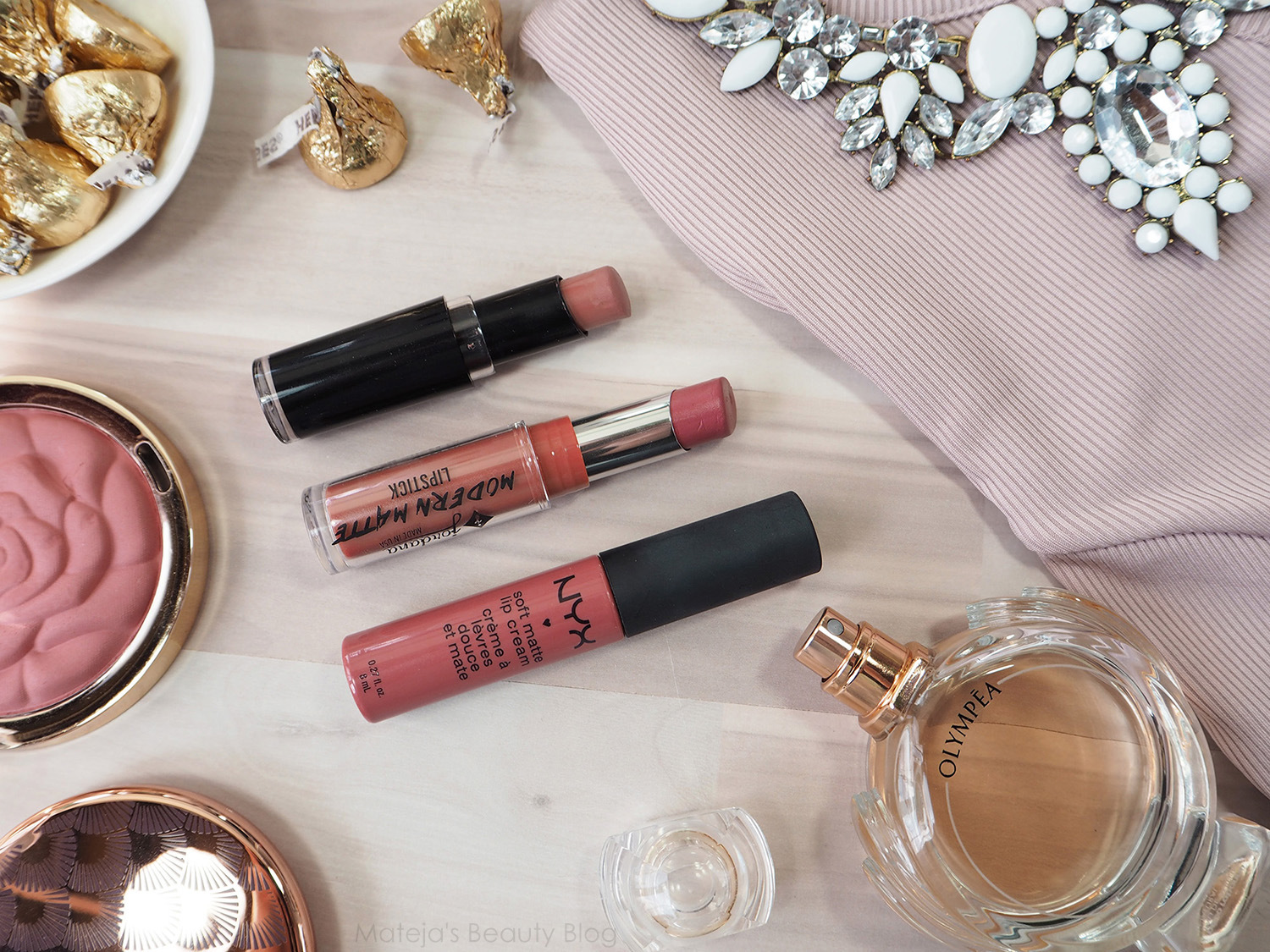 WET’N WILD Megalast Lipstick
Bare it All
This is hailed as one of the best dupes for Mac’s Velvet Teddy, which was along with Mac’s Soar, the quintessential shade of the 90’s modern revival. When I’m pale this is quite a nude-brown shade on me, but on more medium skin tone it looks amazing because it gets a tiny bit more pinky-mauvey. People say the formula of these is dry, but it feels fine to me and I apply it without tugging or dragging, but they older they get, the drier they are.
JORDANA Modern Matte Lipstick
01 Matte Bare
A rosy-brown nude shade with a semi-matte finish in a nice formula that doesn’t feel drying, is opaque and lasts decently on the lips. The older these get, they start drying up, but when they’re new the formula is nice. 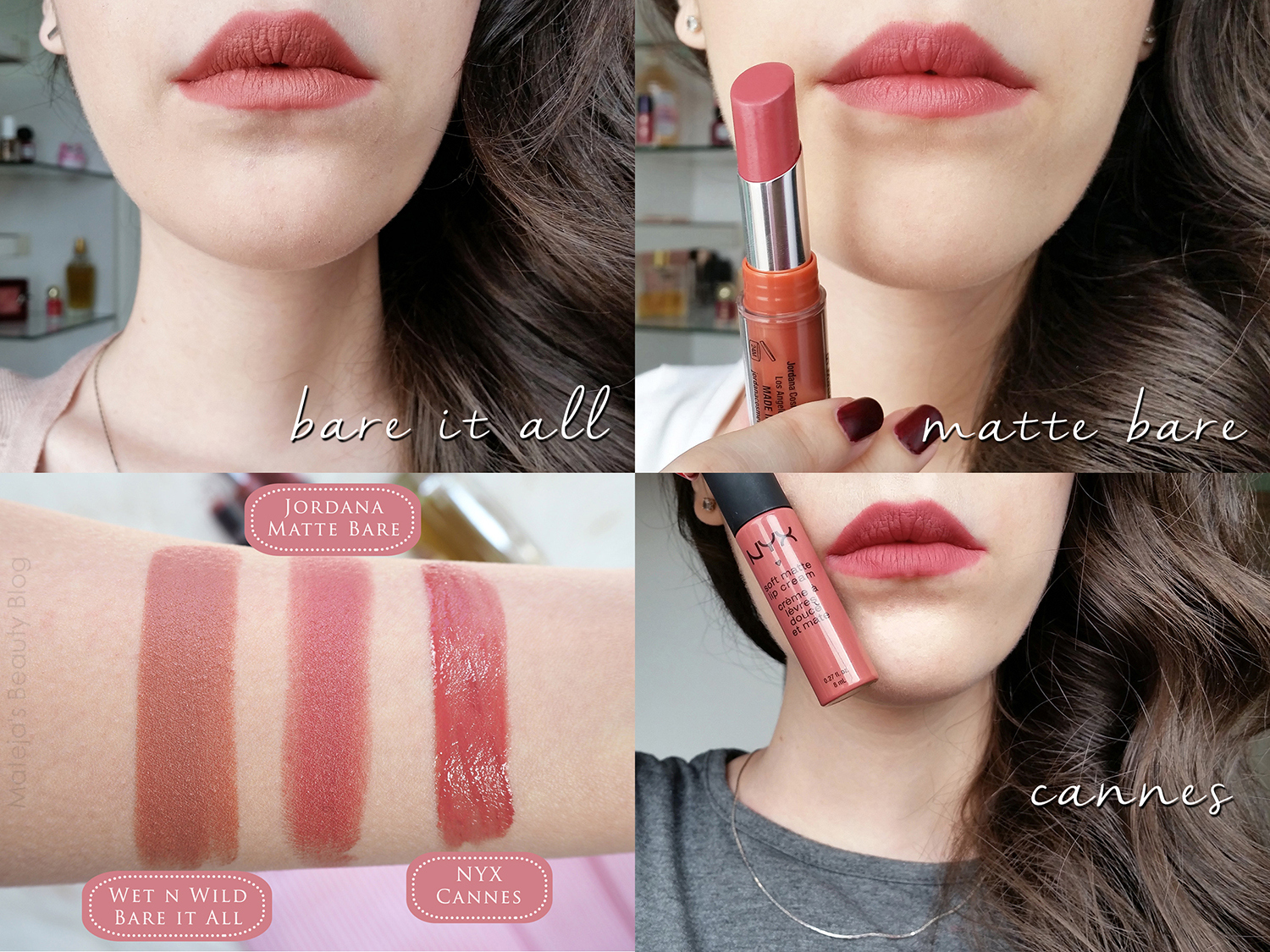 NYX Soft Matte Lip Cream
Cannes
NYX’s version of matte lipstick are again one of the earliest and therefore not the best (though still good). The formula is oily with a lot less pigmentation than newer such product, but these also take a lot longer to set to a matte finish and are much more comfortable for those with dry lips. Cannes is hailed the “the” 90’s lip colour in their selection and it’s a medium peachy-rosy-brown shade that will probably look more rosy on medium skin tones, but it’s a nice neutral shade with a twist on me. 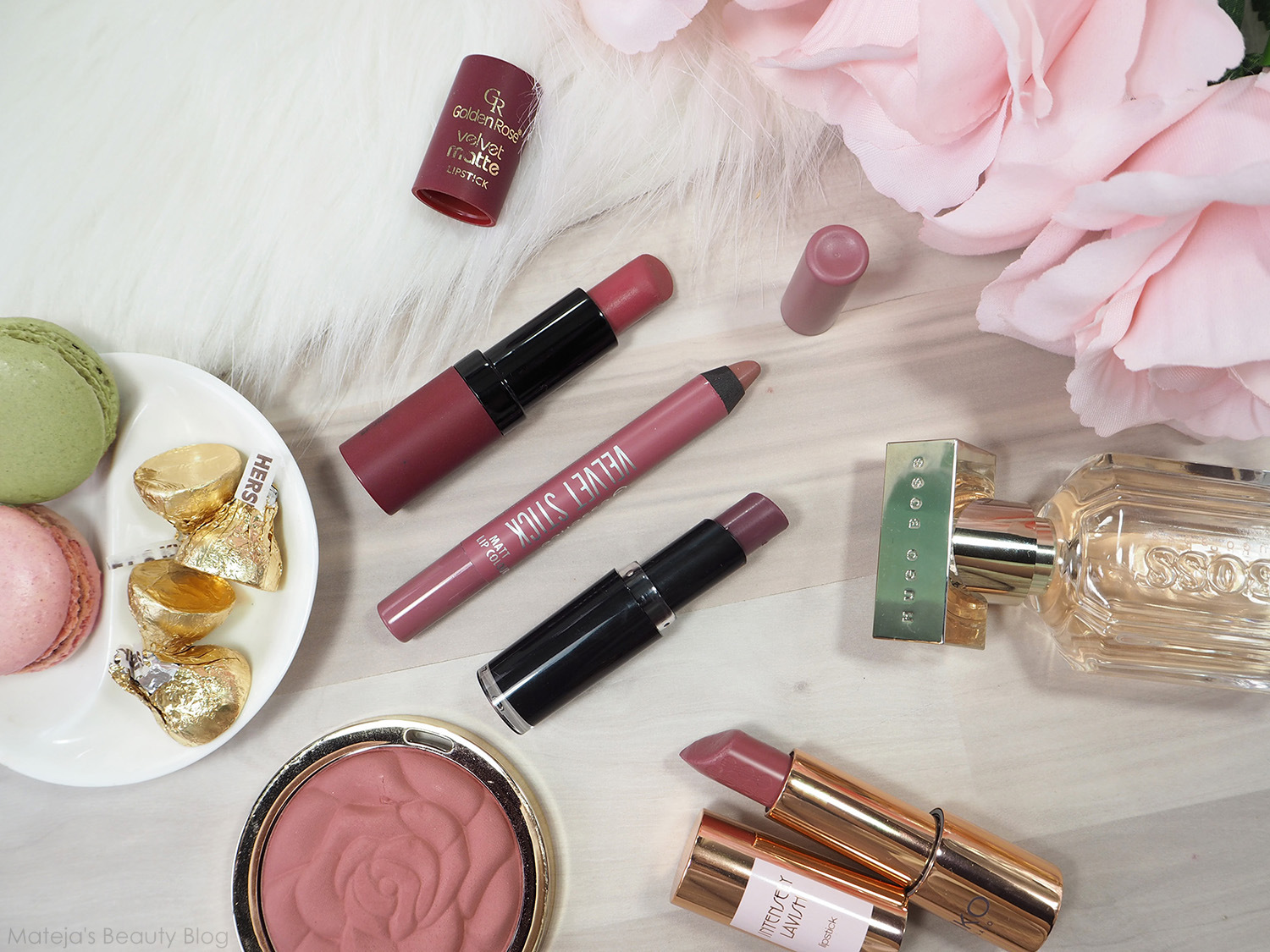 GOLDEN ROSE Velvet Matte Lipstick
12
Along with Nude-ist, Birthday Suit and recently Committed, this is one of my most worn shades. It’s one of those shades that just goes with everything and is a no-brainer choice. It’s a muted warm rose shade with some peachiness that looks so polished and modern, and I actually got this shade because I heard it’s similar to Mac’s Mehr, which is another popular shade in the 90’s revival. The formula of it is a lovely matte one and the price is so affordable.
ESSENCE Velvet Stick
02 Peony Star
This is a shade that looks so right in the shop, while on the lips, it’s a bit of a let-down. It swatches lovely, a nice pinky-mauve shade, but on my lips it’s different and it’s actually almost the exact shade of my lips, but cooler and greyish. It still fits into the trend, but it depends on your skin tone how it’ll look. The texture is waxy, not truly matte and not particularly long-lasting 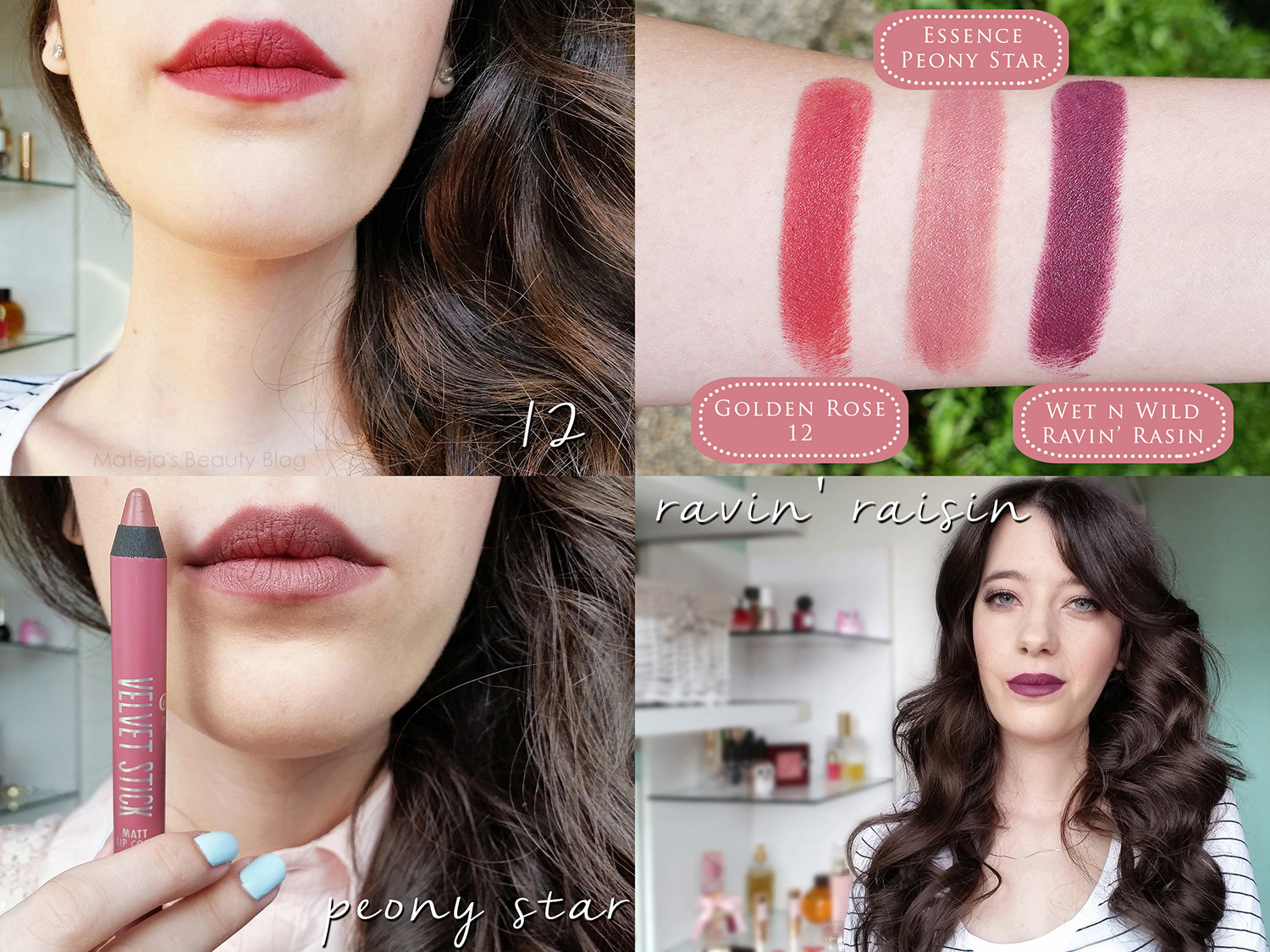 WET’N WILD Megalast Lipstick
Ravin’ Rasin
Something completely different in this selection, but on the right skin tone, this looks like the quintessential 90’s shade. On me it’s a medium cool greyish purple shade, while on warmer, darker skin tones it’s warmer and that rosy tone becomes a lot more pronounced. Formula is the same as at Bare it All, so thick, but applies ok. 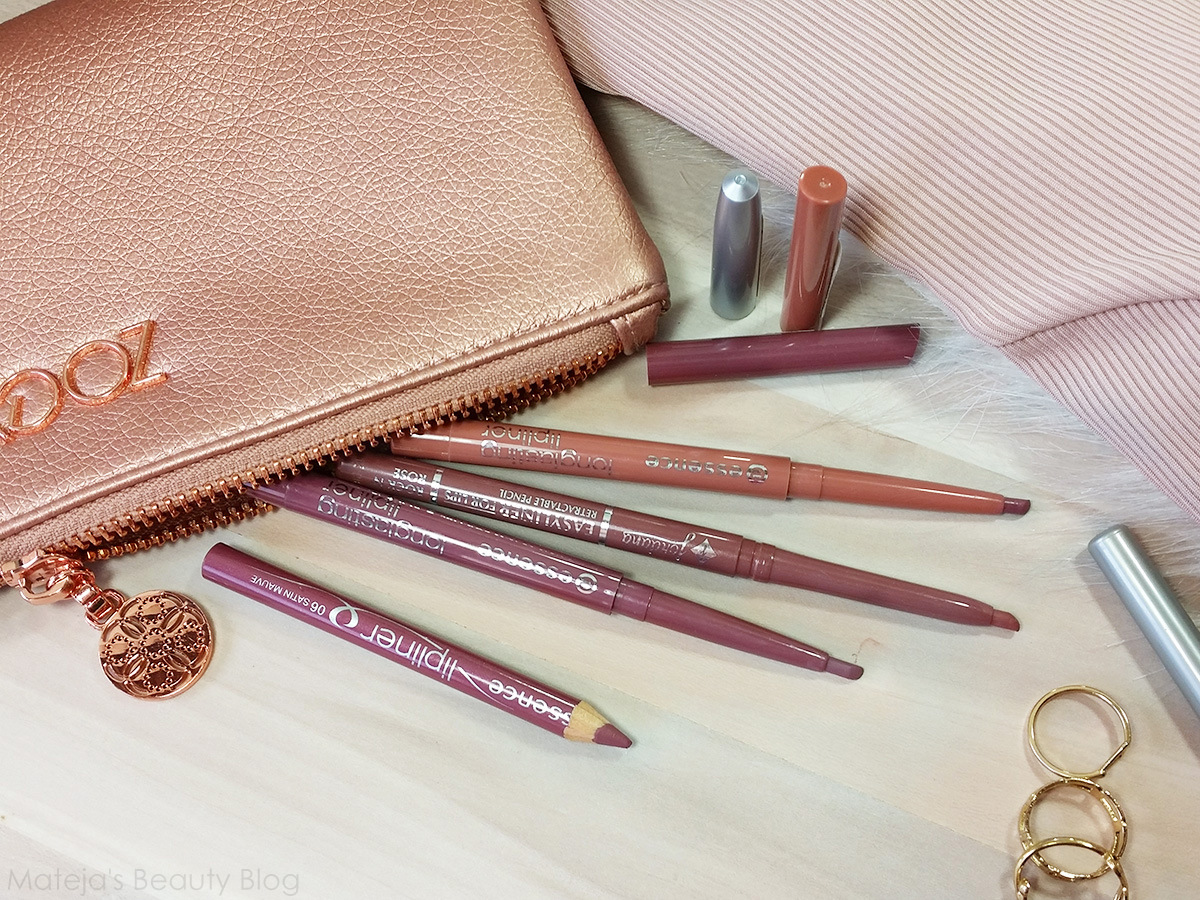 ESSENCE Lip Liner
06 Satin Mauve
Everyone and their mother own Satin Mauve by now. It’s cheap as chips and a great way to try the 90’s trend. On me it looks wrong, as the grey tones in it are just too strong, but on darker skin tones, it looks a lot warmer and a proper mauve shade. They recently changed the formula and I hear the shade too, but the price is still the same.
ESSENCE Longlasting Lipliner
07 Plum Cake
A similar shade to Satin Mauve, but more muted. In combination with a warm skin tone, it’ll look perfect, actually like Lovely Frappuccino looks on me, while on my skin tone it’s a disaster. It’s another very cheap way of discovering such shades and if you’re new to these shades and you have Essence where you live, I really suggest you start with either this shade, Satin Mauve or Lovely Frappuccino. 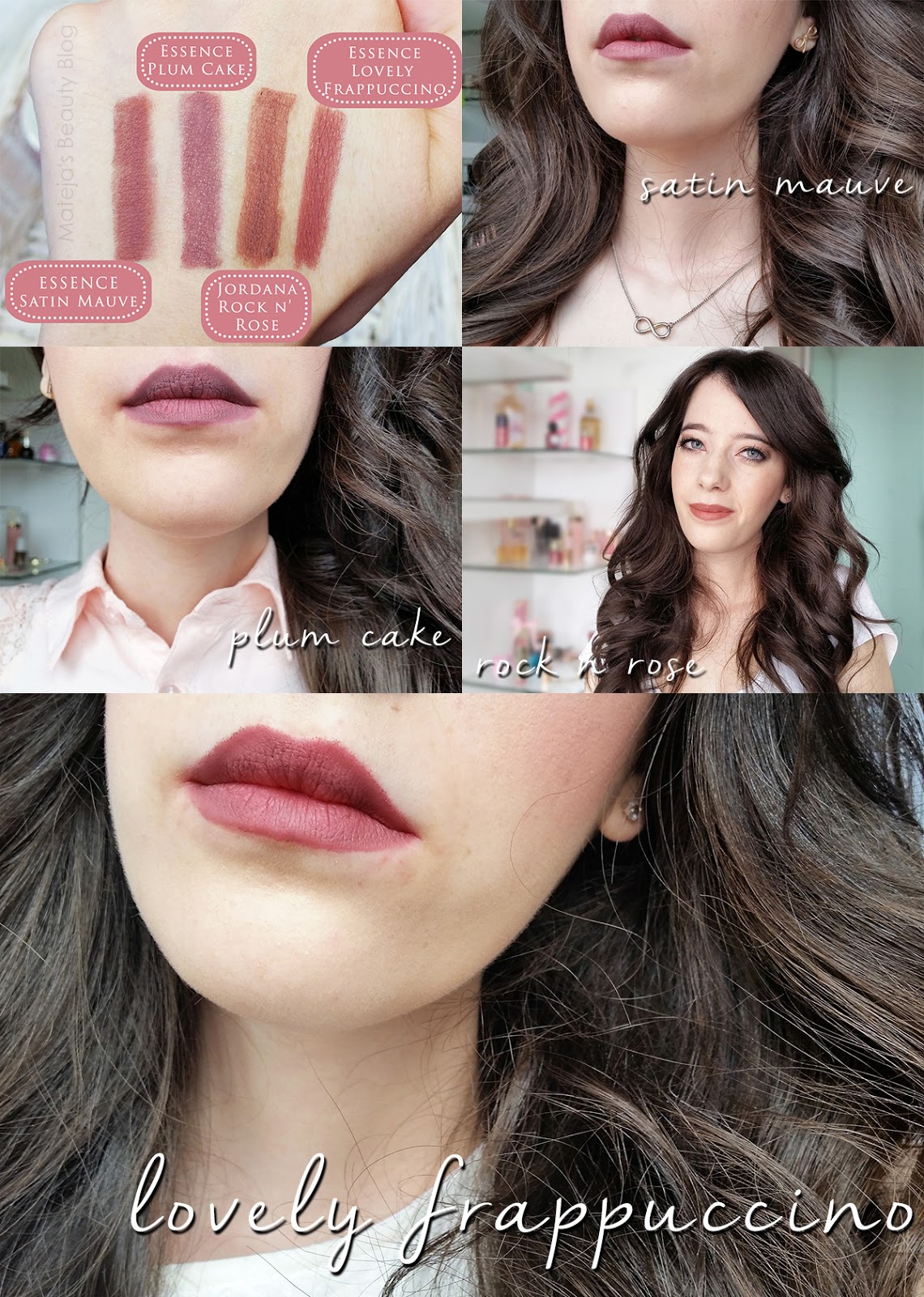 ESSENCE Longlasting Lipliner
05 Lovely Frappuccino
One of the best shades on my skin tone and if you have a problem shades looking too violet/cool, give this one a try. It looks very warm brown on most people I’ve seen, but on me it’s more cool toned and mauve-y, yet not at all draining like Essence’s Satin Mauve lip liner. I just love this on my lips – it makes them look more defined and perfected, plus I like the formula of these as well. By the way, I hear this is similar to Soar by Mac.
JORDANA Easyliner
Rock n’ Rose
An alleged dupe for Mac’s Whirl, Rock n Rose was popular way before the trend started and it holds an impressive rating on Makeup Alley. I was a bit taken aback when I saw it in person – it’s very brown, though it’s more of a taupe brown, but it has some hints of rosy tones.The texture is a bit like Essence’s Longlasting lipliners, so a great balance between being soft enough for it to transfer easily, but not too fragile, so it would break constantly.

And that’s my collection of these type of shades. Some look awful on my porcelain skin and some look good, but I got these shades because someone raved about them, so they will work on different skin tones. Gejba from Parokeets swatched quite a few more of such shades in her matte liquid lipsticks comparison if you need more reccommendations. I have my eye on Pupa’s 12, Stila’s Patina, Jordana Rose Macron, Milani’s Amore in Precious and Adorable.