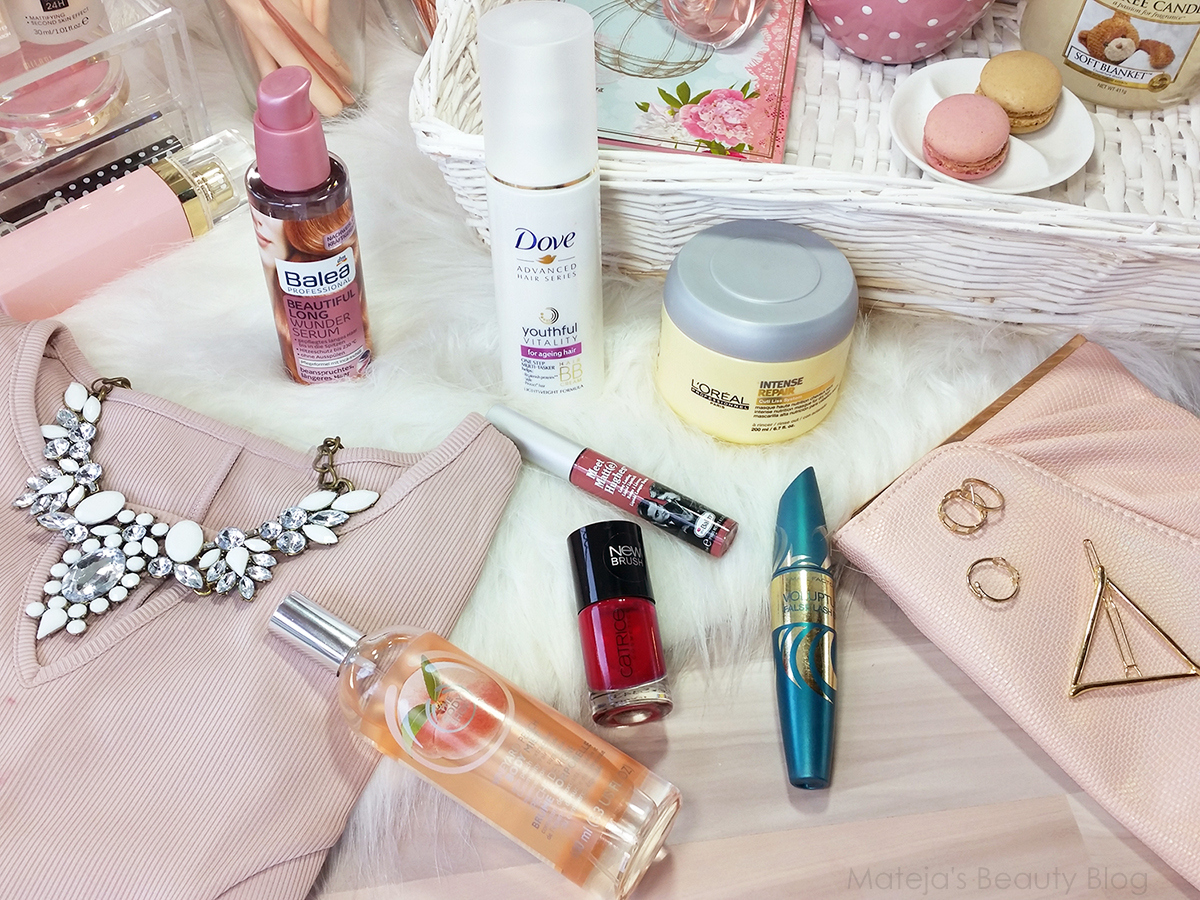 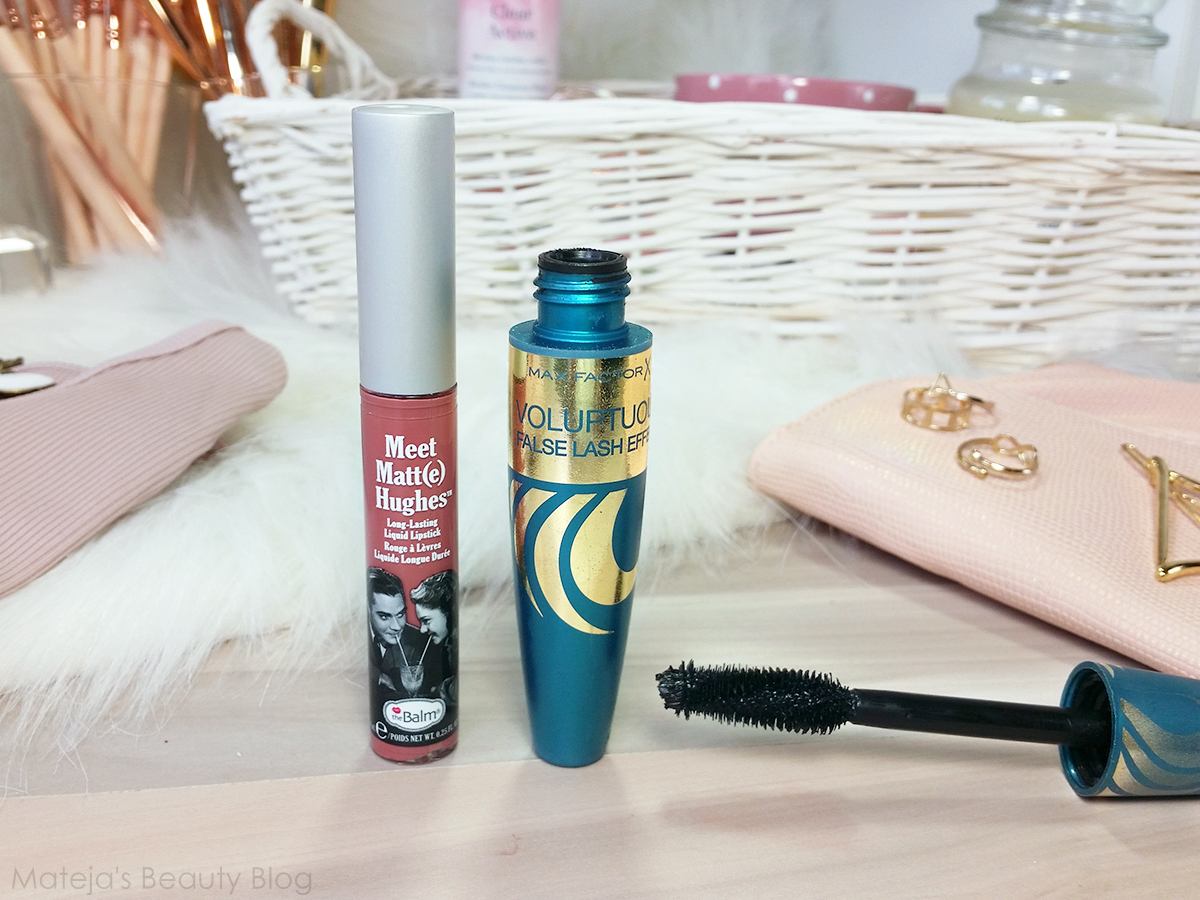 THEBALM Meet Matt(e) Hughes
Committed
I’ve just posted a review for these and though I bought two shades this month, Charming and Committed, it’s the latter that was on my lips all the time and became one of my favourite ever shades. It’s a difficult colour to describe, theBalm says it’s a pinky nude, but it’s so much more than that on me, as it definitely has a bit of peachiness to it. The formula is in my eyes outstanding – properly matte in minutes, it doesn’t transfer or smudge, it lasts well on the lips, plus fades nicely and is comfortable to wear. So far these are my favourite matte liquid lipsticks.
MAX FACTOR Voluptuous False lash Effect Mascara
I’ve been holding out on you because this could have been in my monthly favourites for several months now. The thing is that I ended up using it on most days. I use waterproof formulas on days that I need my lashes to look good and perfectly curled all day, but this is a mascara for lazy occasions. It still gives a fab amount of volume (well, now it’s almost dry, but when it was new it was great), it defines and it lifts my lashes a bit. The more I think about it, the more I’m drawn to repurchase it, even though the price is steep for a drugstore mascara. 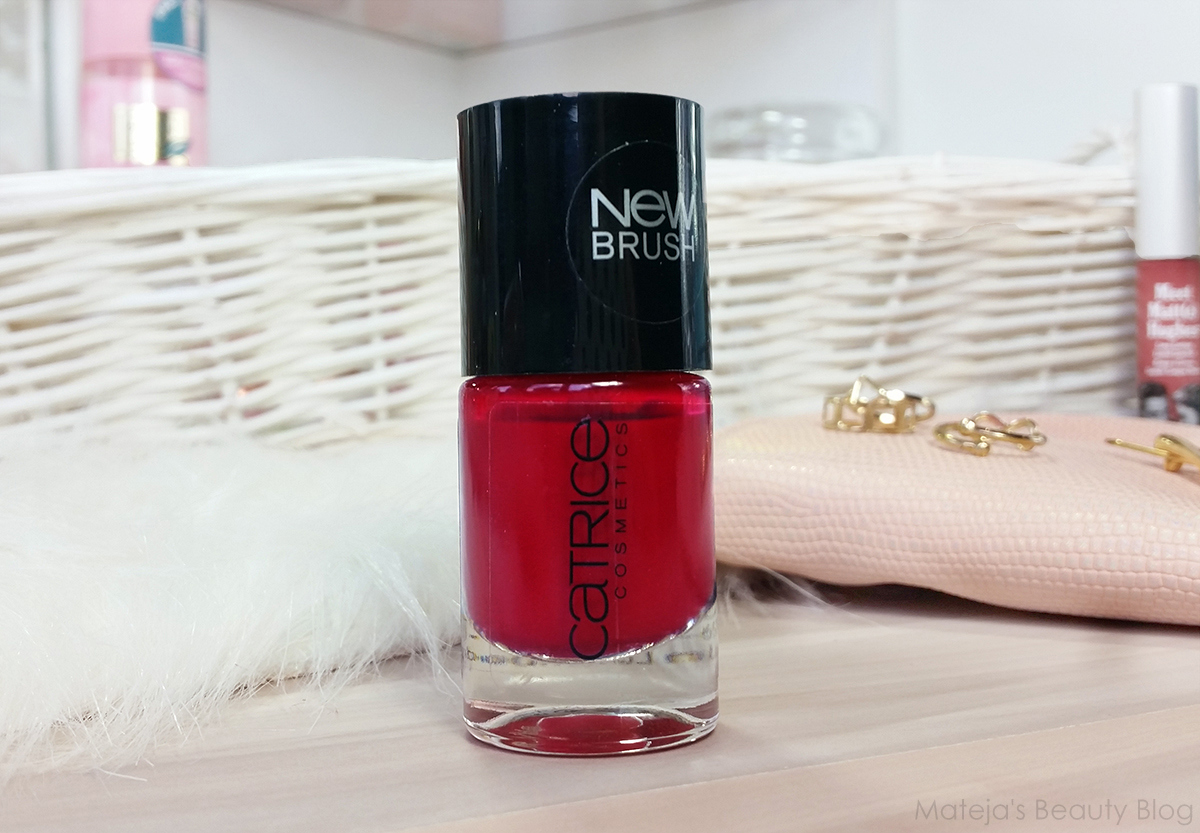 CATRICE Ultimate Nail Lacquer
18 Bloody Mary To Go
This sort of a staple of mine. I haven’t bought any new nail polish in a while and at such times I always go to my classic red or nude shades, this one is actually at the top of my list because it’s “the” retro-glam red shade. It’s a blue toned one, but more of a neutral version of the shade and looks amazing on the nails. The formula is a simple one that works great, I’d say almost a one coater, but I always apply two coats for better staying power. 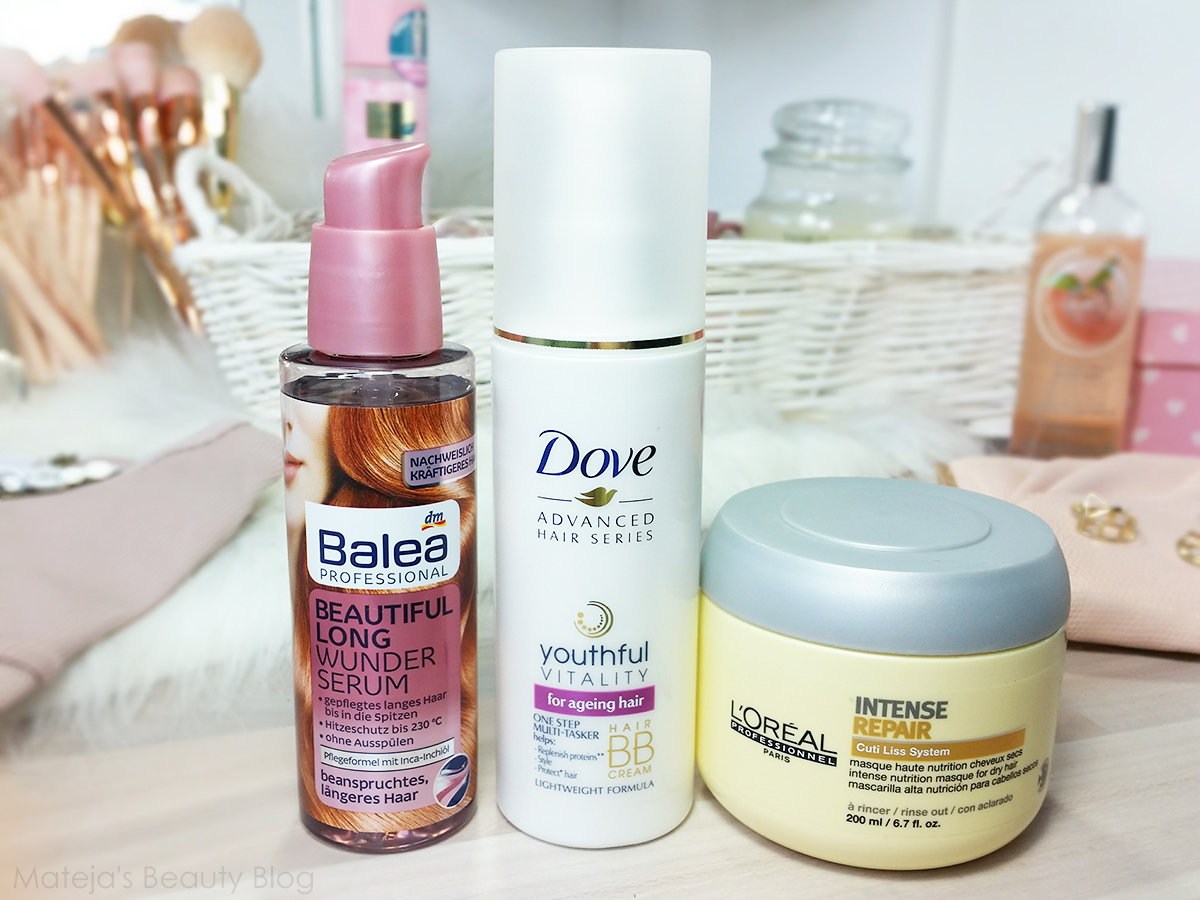 BALEA Beautiful Long Wunder Serum
This is something that I have been searching for years, but no affordable brand available here apparently decided to either make one or sell it. It’s the most simple heat protector in a serum formula. Why do I like the serum version? Well, milks, lotions and liquids leave your hair wet, which means you have to apply heat protectant way before you get to work if you want the hair style to hold and to avoid sizzling in contact with heat, but with this I can get straight to work. Tigi actually has something very similar called Catwalk Sleek Mystique, but it’s more expensive and not as easy to get as Balea’s, but it is thicker, which I actually like more, while those with thin hair will probably prefer Balea’s.
DOVE Advanced Hair Series Youthful Vitality Hair BB Cream
Dove is just blowing my mind with their hair care range, well at least their leave-ins, which for some reason aren’t sold in our drugstores (because Slovenes don’t deserve the fancy stuff, like always).  Dove Quench Creme Serum is still my favourite, but this is amazing as well, just on damp hair. It has keratin and coconut oil high on the list, which is basically unheard of for the cheap stuff, so it’s not surprising it’s so good and it’s another fantastic product for frizzy, dry hair. It helps my hair look more smooth, shiny and silky, it basically feels normal and moisturised. Great stuff.
L’OREAL Professionnel Série Expert Intense Repair Masque
I’m kicking myself for not picking this is sooner, even though it was on my wishlist for a few years now, but this is seriously so good. The effect of this on my hair is just fantastic and it does all that I expect – really nourish my hair, make it more manageable, smoother and easier to style. Drugstore conditioners like Aussie 3 Minute Miracle, which is actually really good, pales in comparison to this, so I will invest in a 500 ml pot and probably set aside all of my cheap stuff that made my hair just too dry with prolonged use. 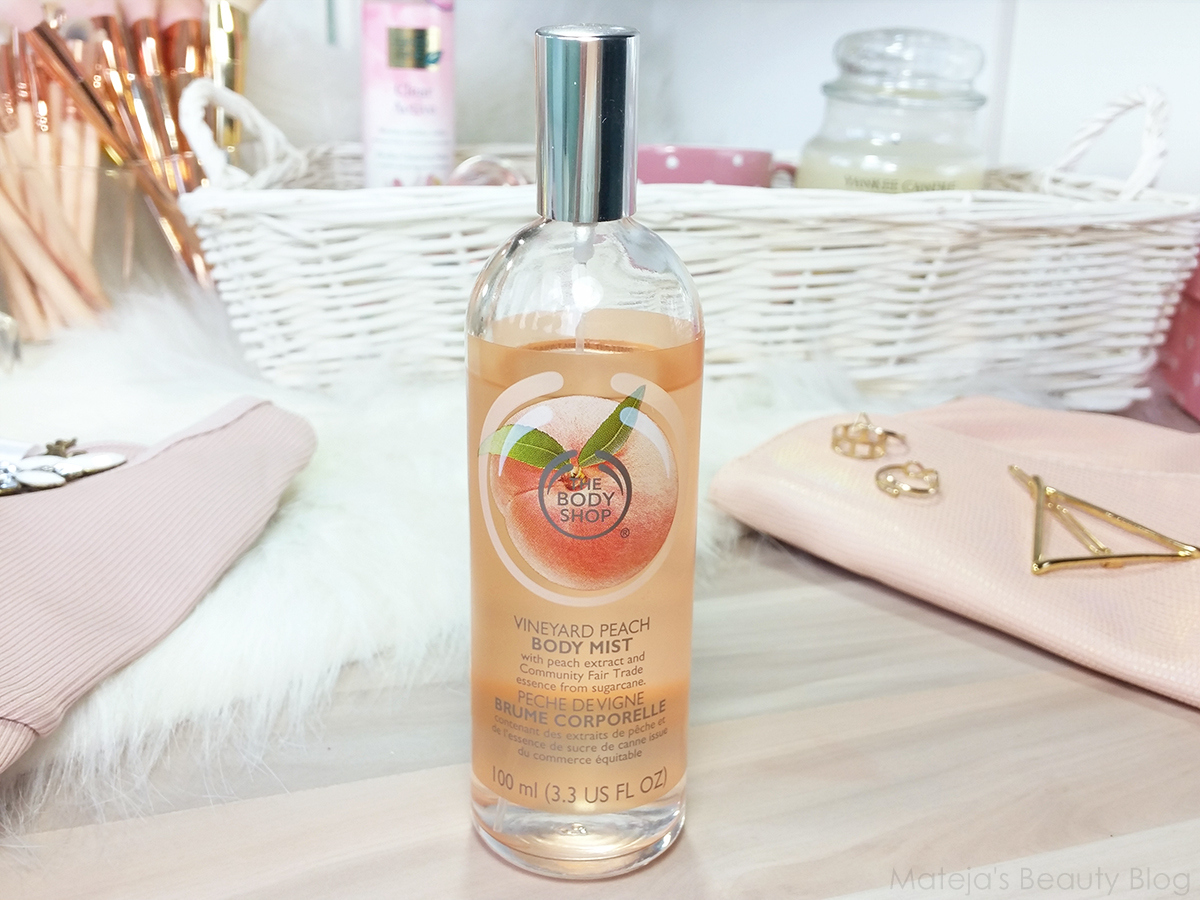 THE BODY SHOP Body Mist Vineyard Peach
I’m saving this obsessively and I just know it’ll go bad because of my stupidity. It’s one of my favourite scents ever and I had such a hard time getting it, that I treat it like it’s some super special thing. It smells like vineyard peaches (not the peaches from shops, I mean the home-grown stuff) and peach yoghurt, so I adore it and it’s an excellent fruity summer scent, but it’s got a very weak staying power. I just like the idea of these TBS body sprays, since they look a more high-end due to the glass bottle and I’d like to get more scents. 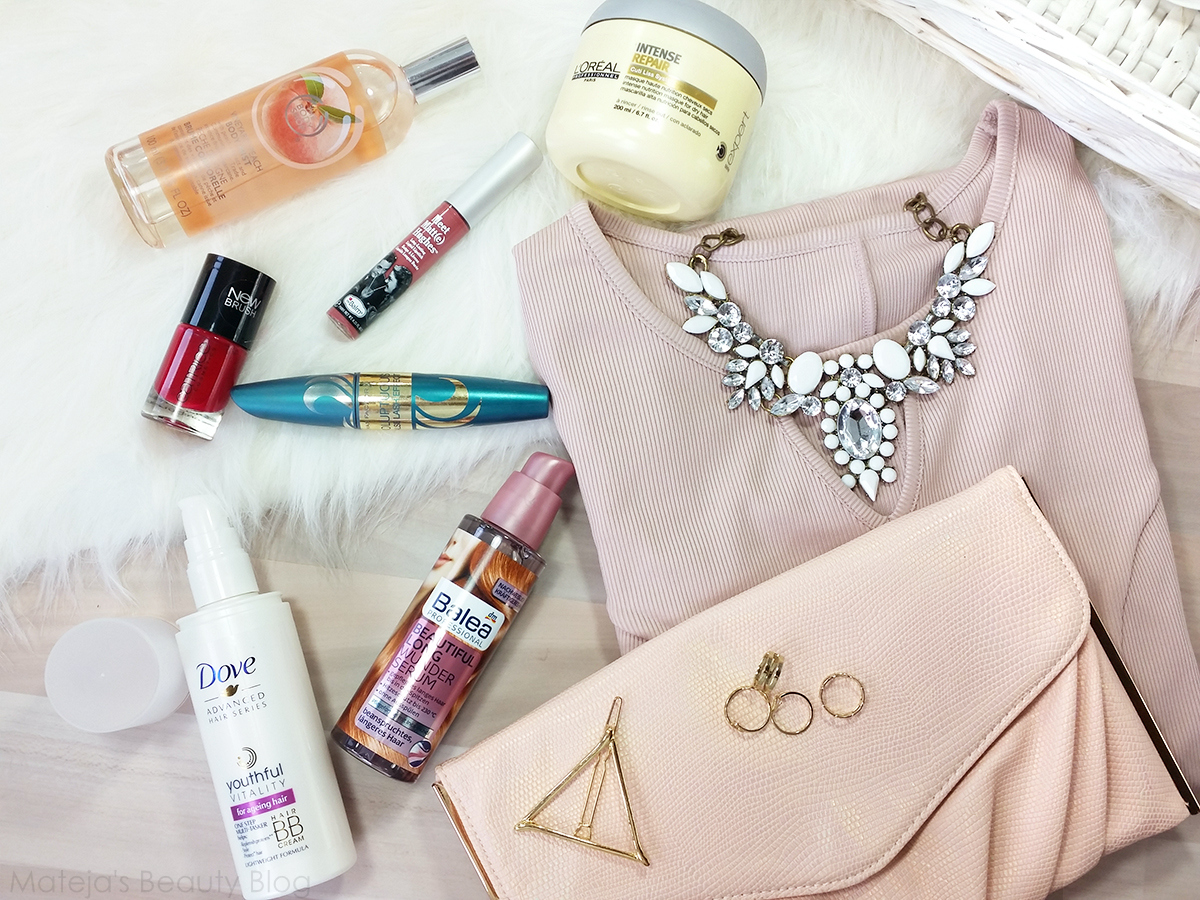