I love trying new eyeliners and this one intrigued me because the design is similar to L’Oreal’s Superstar which is an amazing liner and one of the best to draw flicks with, however, the applicator is quite large, so the main line always ends up bold. Judging from the nib, this Catrice one looked like a baby Superstar, so I had high hopes for it, but I’m just not happy with it. 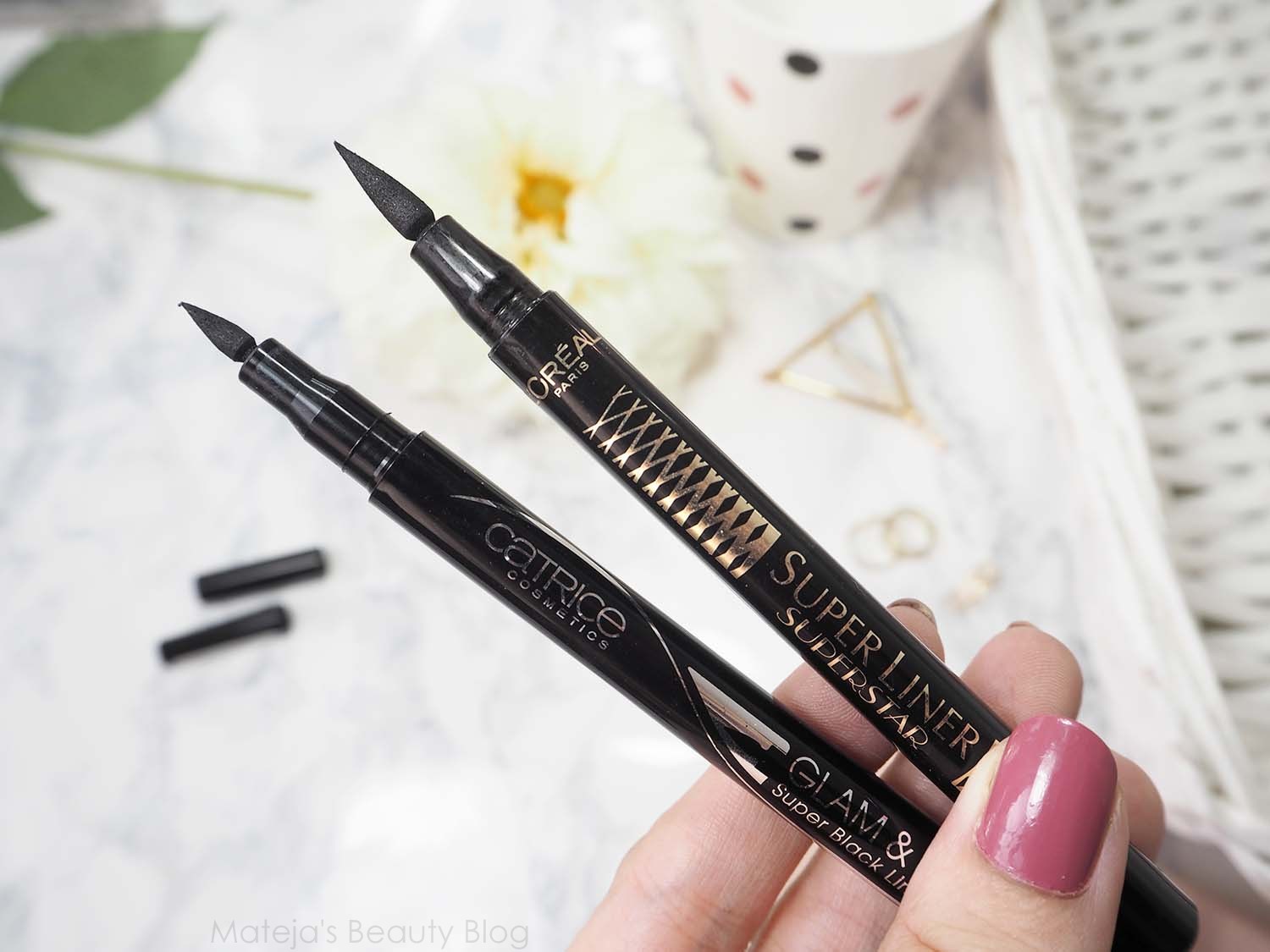 As promising as the applicator looks, in practice it’s a lot more clumsy than L’Oreal’s. It’s a combination of the surface not being very smooth and being too strangely shaped,  crisp, precise lines are almost impossible and flicks are a mini nightmare. I gave it plenty of shots, but it’s just so frustrating to use. I mean you still get a decent line, it’s just not as good as with other liners and that includes the cheaper Essence version. It also loses colour fast in one go, making actually completing the line together with a flick very difficult. I always try to get the best out of the product when do reviews and this was the best I got from a week old liner. 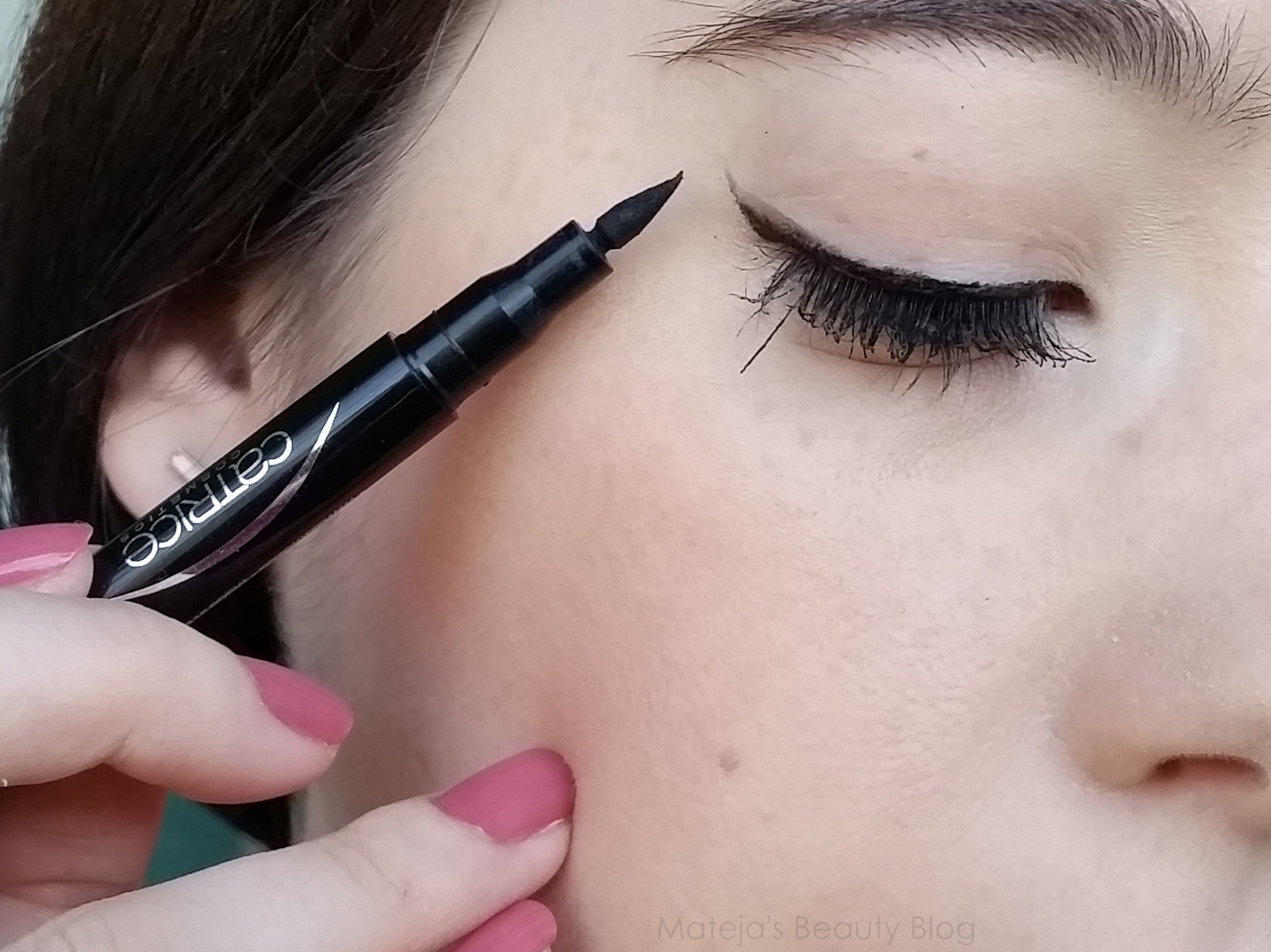 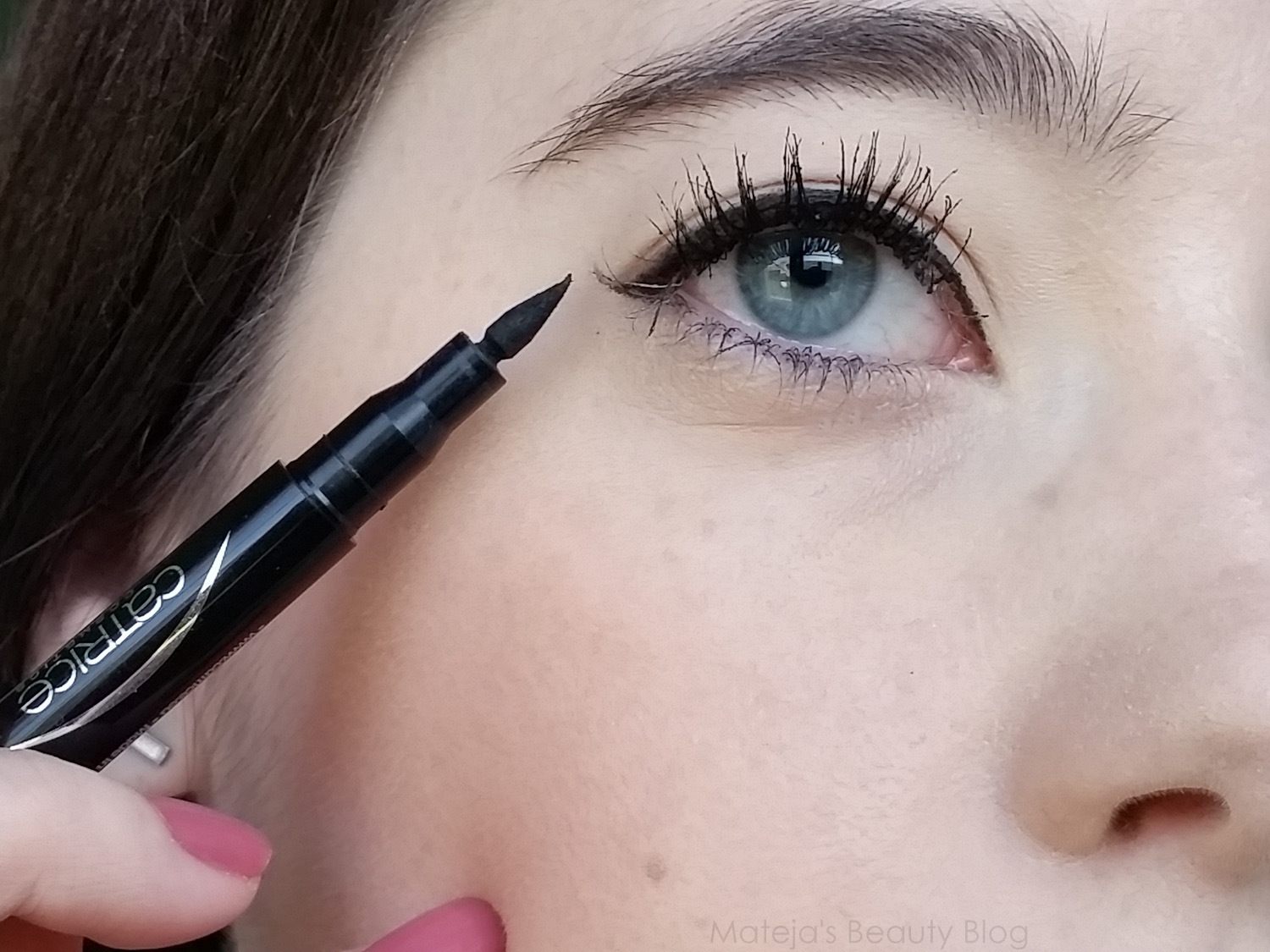 Formula falls short as well. It’s almost like it’s diluted, so when you’re drawing on your eyes, it’s more transparent than others, which means you have to go over the line again for a more saturated, inky black look. Once it sets it doesn’t smudge, but after a while it starts to crumble. Staying power when I swatched it on my hand was amazing, however, this is didn’t translate on the eyes. I get a half a day of wear at most, but it’s patchy. I used Superstar and Catrice’s on each eye one day and the difference was massive. At the end of the day the side with Catrice was a mess, it was crumby, there was barely any liner left while Superstar looked great. The wing started to fade, but the main line was still going strong. Unfortunately Catrice proved to be a failure. 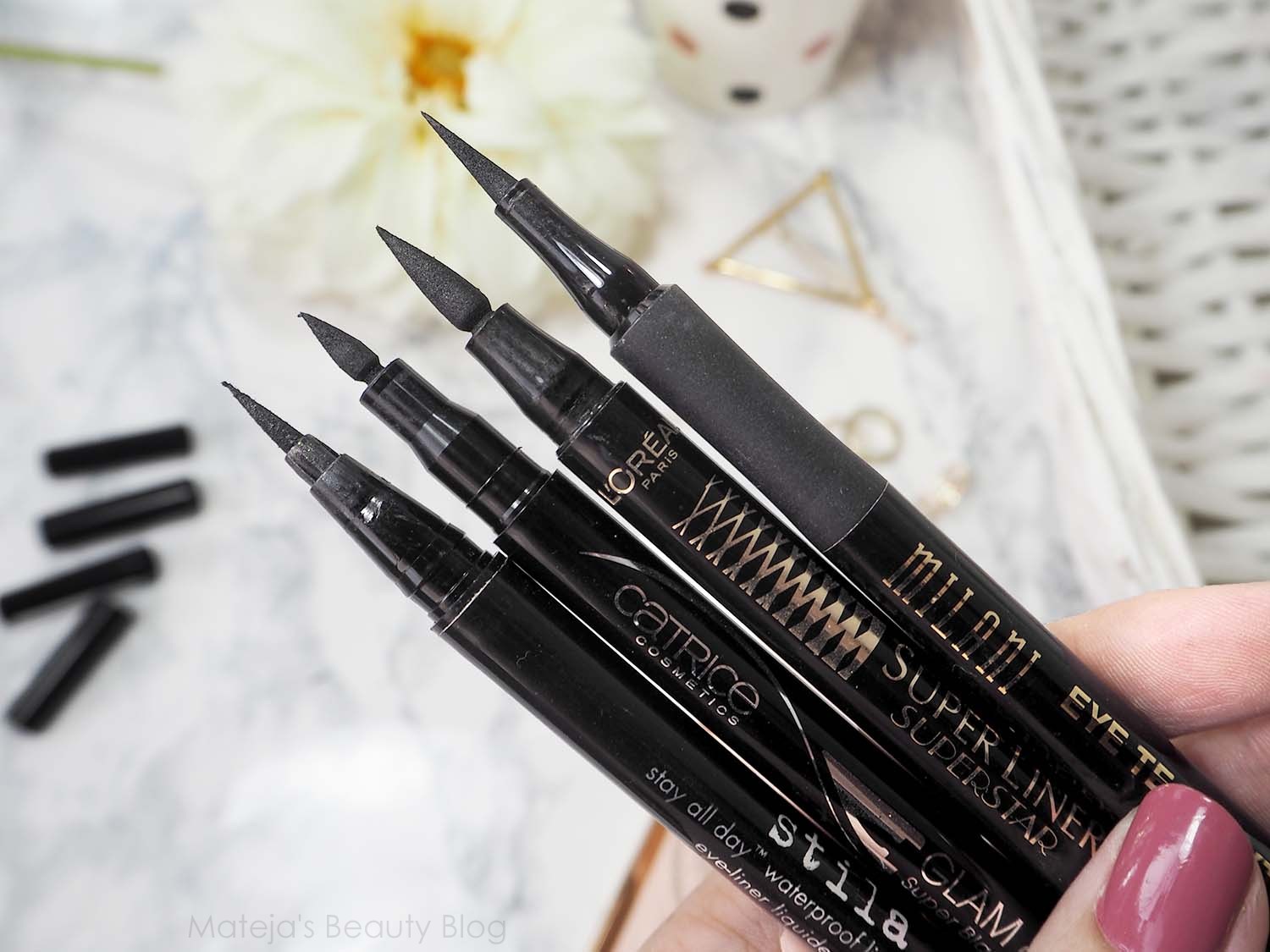 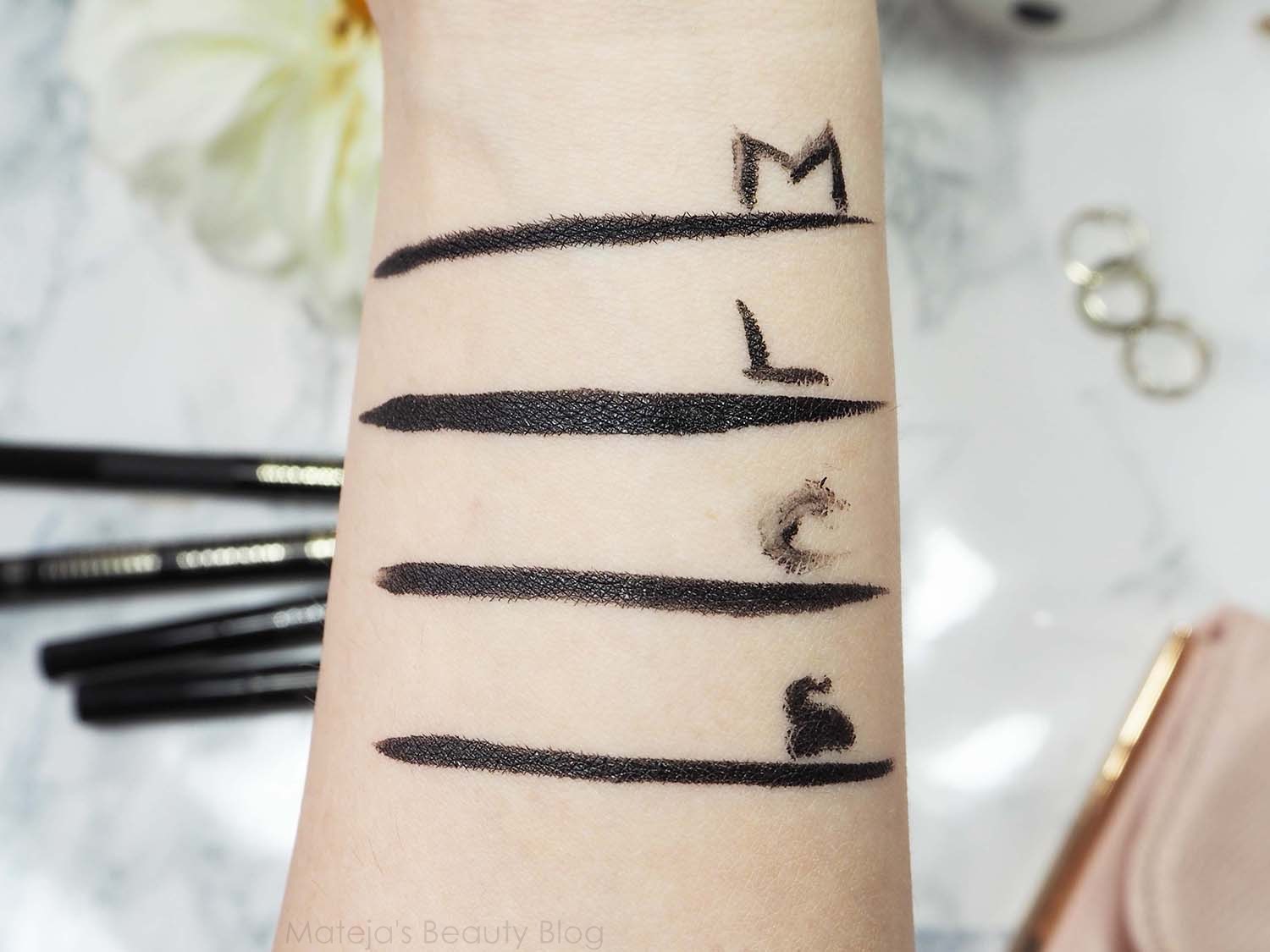 MILANI Eye Tech Extreme Liquid Eye Liner, L’OREAL Superstar Super Slim Eyeliner, CATRICE Glam & Doll Super Black Liner and STILA Stay All Day Waterproof Liquid Eye Liner.
I got mine in Müller for 3.29 €. I still recommend paying more for the L’Oreal one, but if you really want something on the budget, Essence’s waterproof version is much better than this latest Catrice one.
Have a great day!