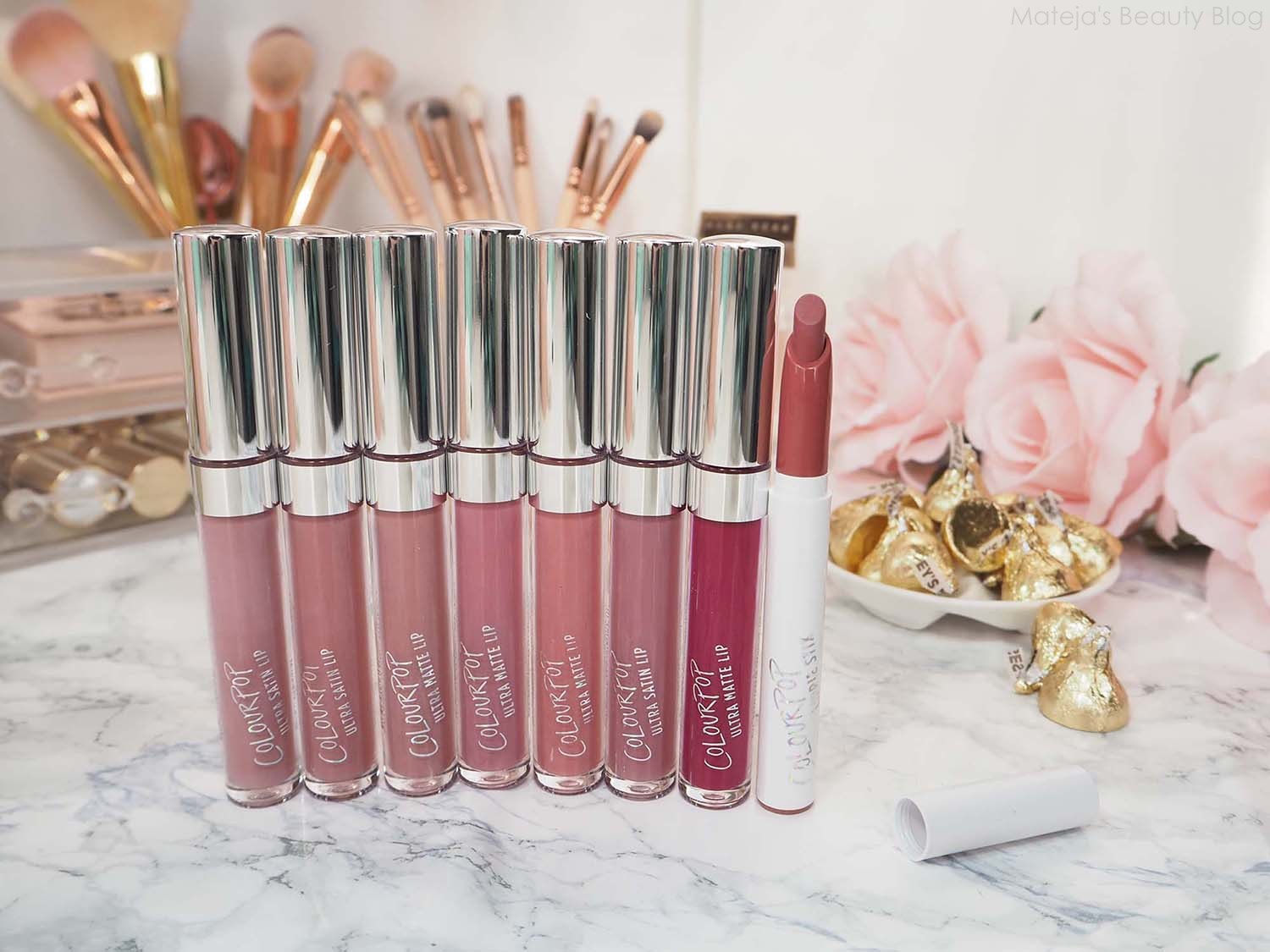 If you noticed an increase of Colourpop products on blogs and social accounts and you have no idea what’s going on, well you missed quite an opportunity because they finally offered both more affordable worldwide shipping and occasionally free of costs for a limited time. I was also one of those non-US residents who jumped the wagon and snatched myself a “few” colours (hey, they’re actually reasonably priced), though I have to say finding decent swatches on pale skin proved incredibly challenging. I got three types of lip products – the Ultra Matte, Ultra Satin and one Lippie Stix in Matte formula. Swatches are at the end if you want to skip the review part. 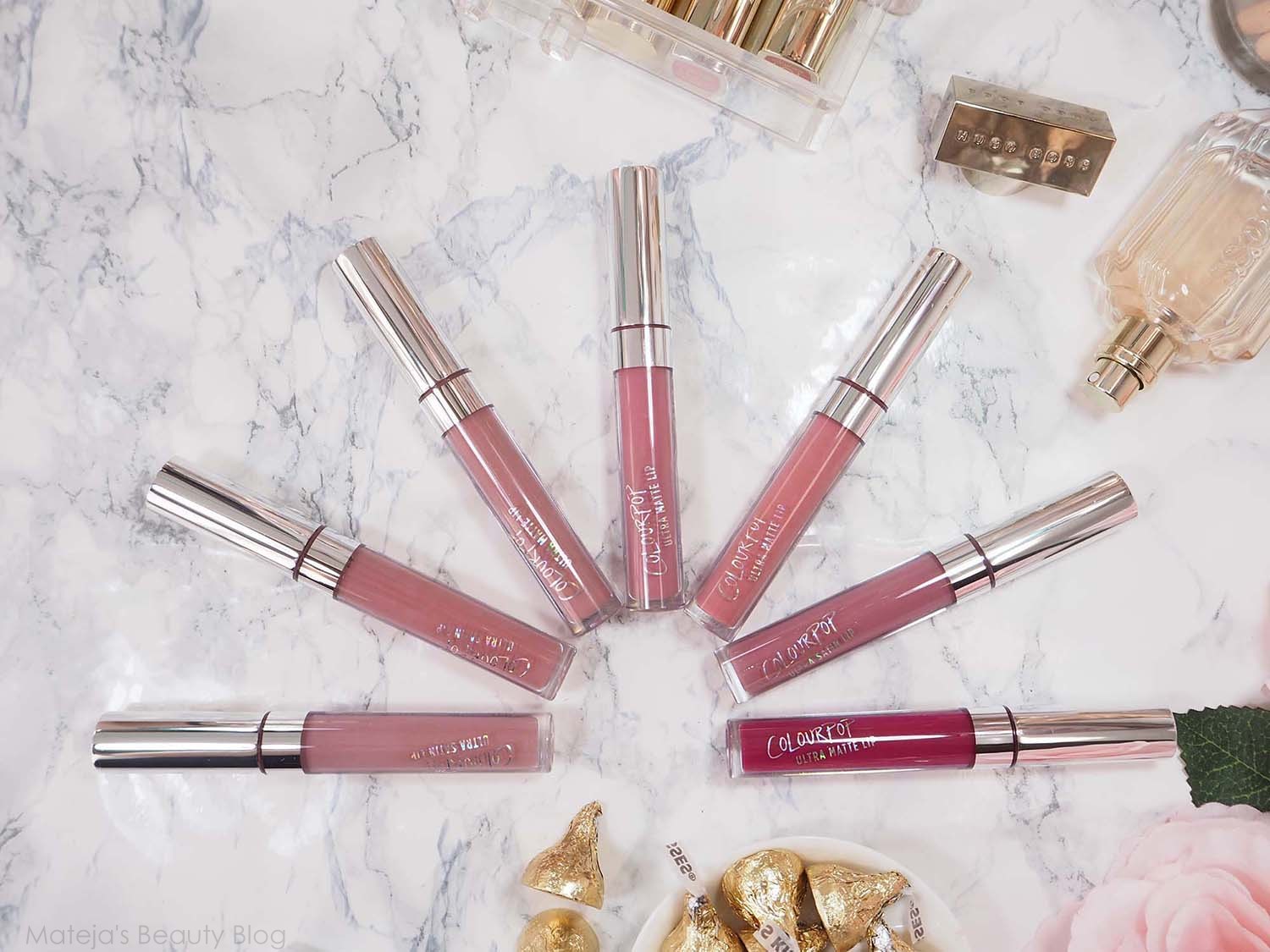 Ultra Matte Liquid Lipstick
Texture: These have a similar creamy formula as Milani’s Amore, so they are easy to apply, although Bianca is surprisingly a bit different because it’s thicker. I was told the formula is very drying and I need to say again that my lips are almost never dry, so it’s more difficult for me to assess whether something will feel drying, however, at this product I’m almost confident it will feel drying to a lot of people. It sets completely perfectly matte and in a short time, it’s also that type of matte liquid lipstick that dries to a layer that you can feel on the lips. This is really a formula only for hard-core matte lovers, as far as the rest go don’t say I did not warn you, but at the same time I’m not trying to scare you.
Pigmentation is great, you get an opaque layer with one coat and that includes the dark More Better, which applies completely evenly. Another thing I need to mention is that they look very different in the tubes than on the lips, so don’t make your choices based on what you see. Some shades look almost identical in the tubes as I’m sure you’ve noticed on my pictures, but on the lips most look darker and individual undertones are a lot more expressed, especially with time as they oxidise.
Staying power: These are some of the most long-lasting lip products I’ve tried. Not that they’ll last perfectly on the lips, mostly those who experience dry lips will notice flakes, but in the first half a day, only a very greasy, bacon-filled meal destroys them (I’ve done many tests with these and McDonald’s Bacon Rosti). Once they set, it requires a makeup remover, preferably an oily one to remove it, but with tissues it’s almost impossible. I have a complaint about More Better and that is that is transfers, even though it feels dry to the touch on the lips. I have an annoying habit of keeping my hand over my mouth when I’m behind the computer and I end up with my face in a gentle magenta hue. So attractive.
Shades: I have four: Bianca, Sollow, Clueless and More Better, all are swatched and described bellow.
Scent: They don’t have a very strong scent, it’s somewhat chemical, indescribable, only More Better smells of chlorine.
Same goes for Satins.
Packaging: the tubes actually feel quite fancy for 6$ and much better than for example Sephora’s. Only the silver writing starts to rub off fast. The applicators are standard.
Satins have the same packaging.
These are 6 $ on Colourpop website. 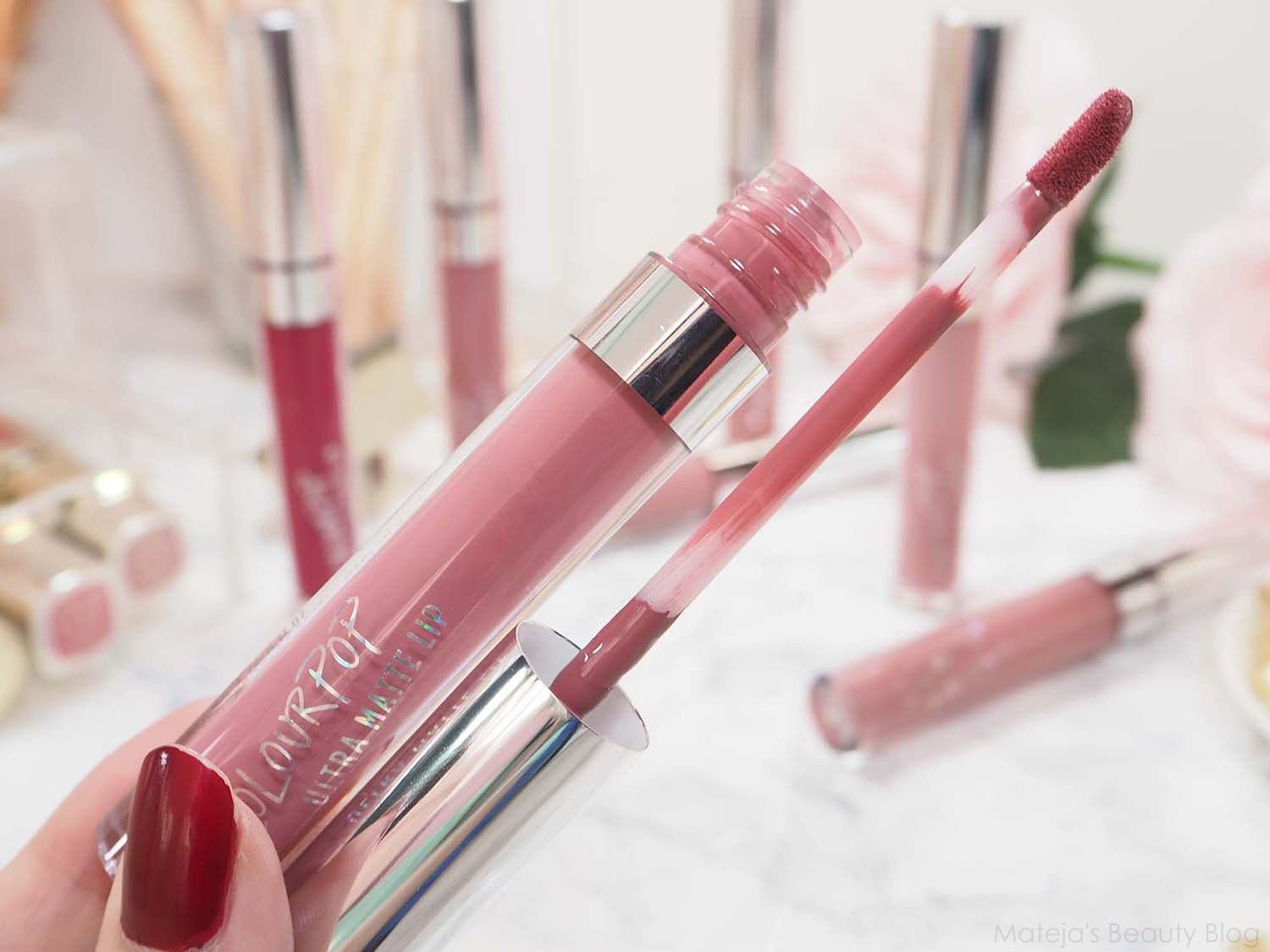 Ultra Satin Liquid Lipstick
Texture: Ultra Satins are supposed to be the more comfortable version of the liquid lipstick formula. The texture is more like a mousse and it applies more comfortably on the lips because it doesn’t start to set immediately. The finish looks creamy from the start, then it sets to this slightly sticky-to-the-touch feeling, but you don’t get a ton of transfer like at for example Revlon’s Ultra HD. In time they actually end up looking matte, so you still get a similar finish to the Ultra Matte, but with less of a uniform layer felling. If you’re picking between Satin or Matte, Satins are more comfortable from the start, but still don’t expect any care from them, though they won’t feel as drying.
Staying power: Again these last very well on the lips after they set, but they are much easier to remove than mattes and won’t last through meals as well.
These are also 6$ 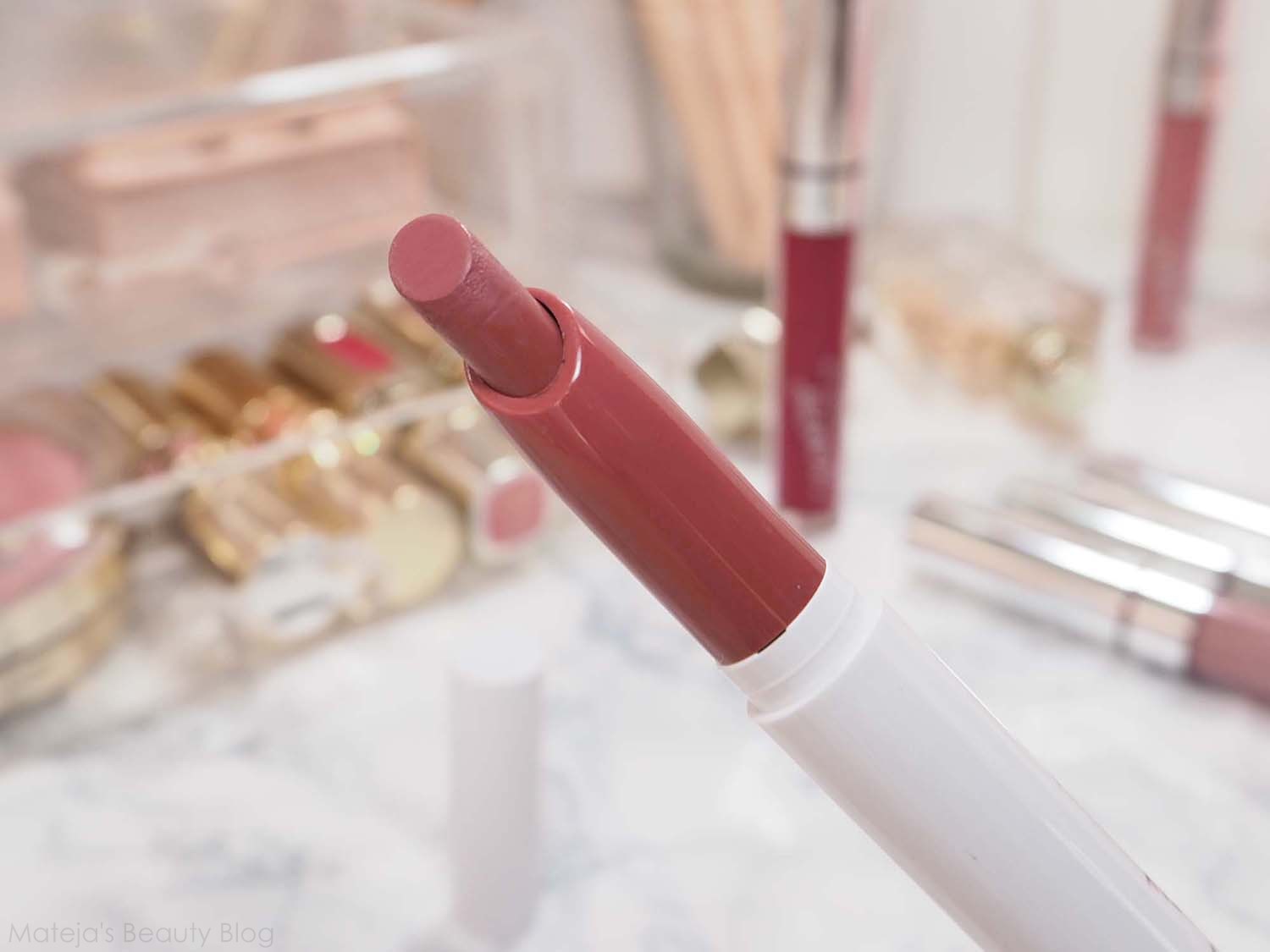 Lippie Stix
Texture: The moment I tried this I knew it’s my new all-time favourite formula. The finish of it is unreal and so close to a matte liquid lipstick and I feel it’s going to be more people’s cup of tea because it doesn’t go from liquid to matte, so it should be more comfortable. Still if you have frequently dry lips, you’re going to need a lip balm under it. Pigmentation is great, you would theoretically need only one swipe, but since this is a thin stick, you need a couple swipes, except those with thin lips of course. It’s incredibly lightweight on the lips and there’s very little of that sort of greasy lipstick feeling, in fact it’s closer to a matte liquid lipstick feeling.
Colour: I have the shade Cami, a rosy brown shade, swatched below. I just adore it.
Scent: Again, it has no particular scent, these really aren’t heavily fragranced.
Staying power: You don’t get the same long-lasting lip colour as at Ultra Mattes, but it is matte, so it lasts quite a while. It can survive some drinking, while eating can already be a problem.
Packaging: the tube is very slim and is the lipstick itself, I need a bit more time applying it and I think I need a lipliner because it’s not the most precise lipstick (I think it’s due to the formula, not the shape). It’s also not that much in it and I’ve already used up a centimetre, so these don’t last that long, but at least they aren’t that expensive
Price and availability: These cost 5 $ on Colourpop and come in different type of formula from creamy to Matte X.
SHADES 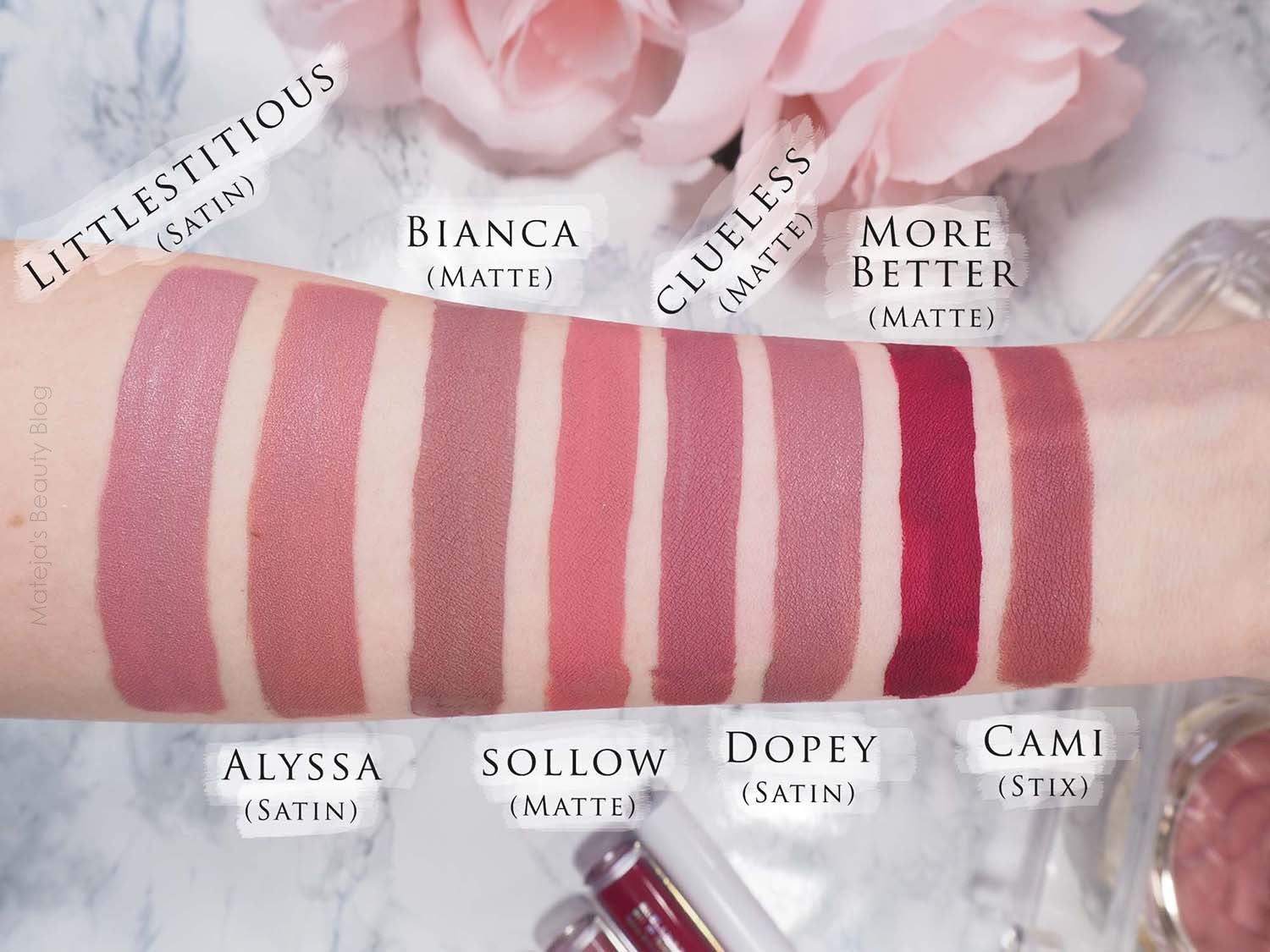 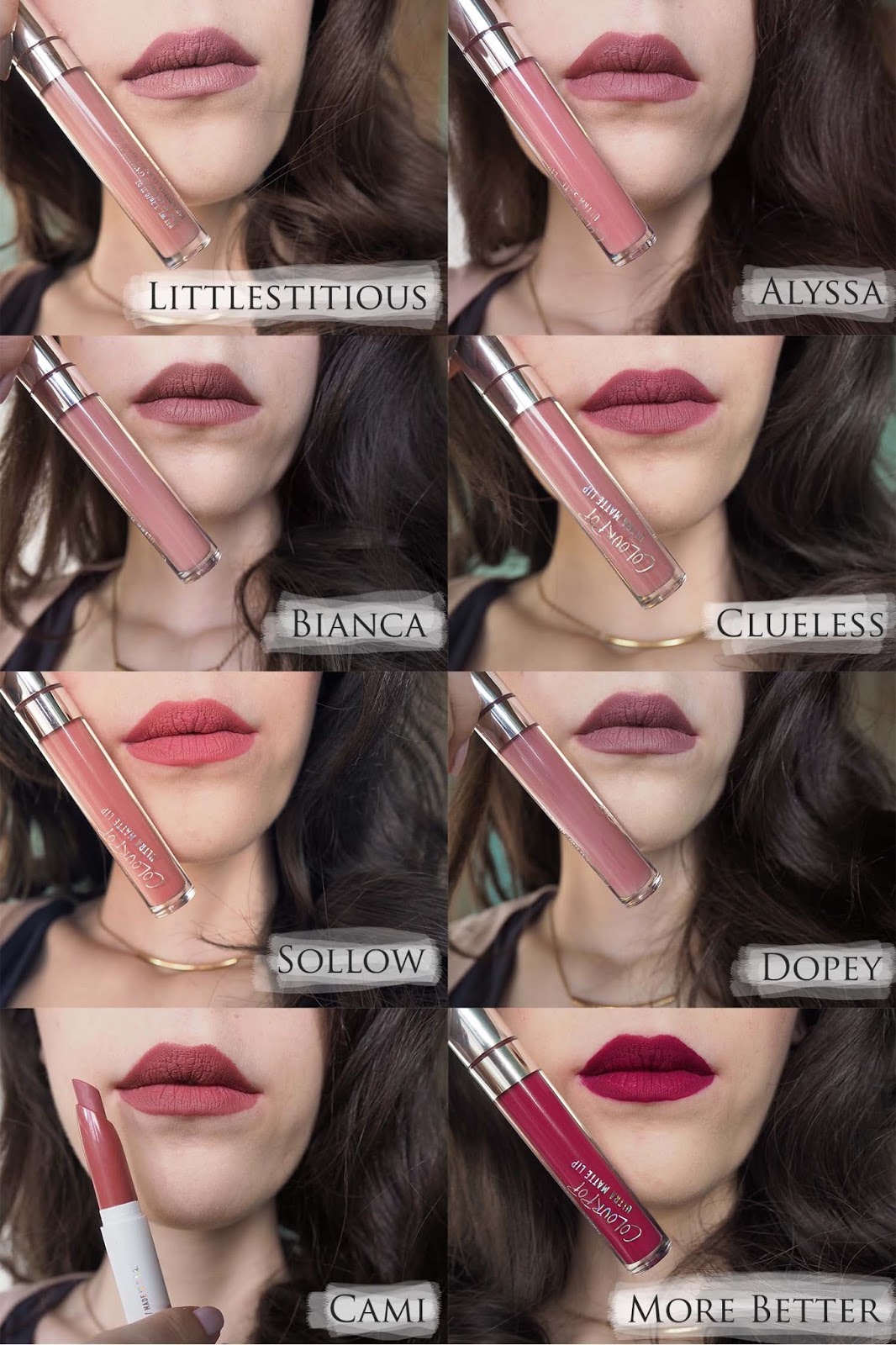 I had a hard time swatching these, not because of the colours themselves or the formula, but because these change so much as they wear. All start much lighter and then oxidise darker shades, but I think I got how they look on average. My skin tone is about NC/W10, currently my best match is Maybelline Fit Me foundation in 110 Porcelain. Most of these shades can look very different on darker skin tones, mostly the violet tones aren’t as pronounced like on me, so think of that when you’re looking at swatches. I also included some comparisons with other matte lip creams, even if the two shades are very different because I wanted to show you how they differ. 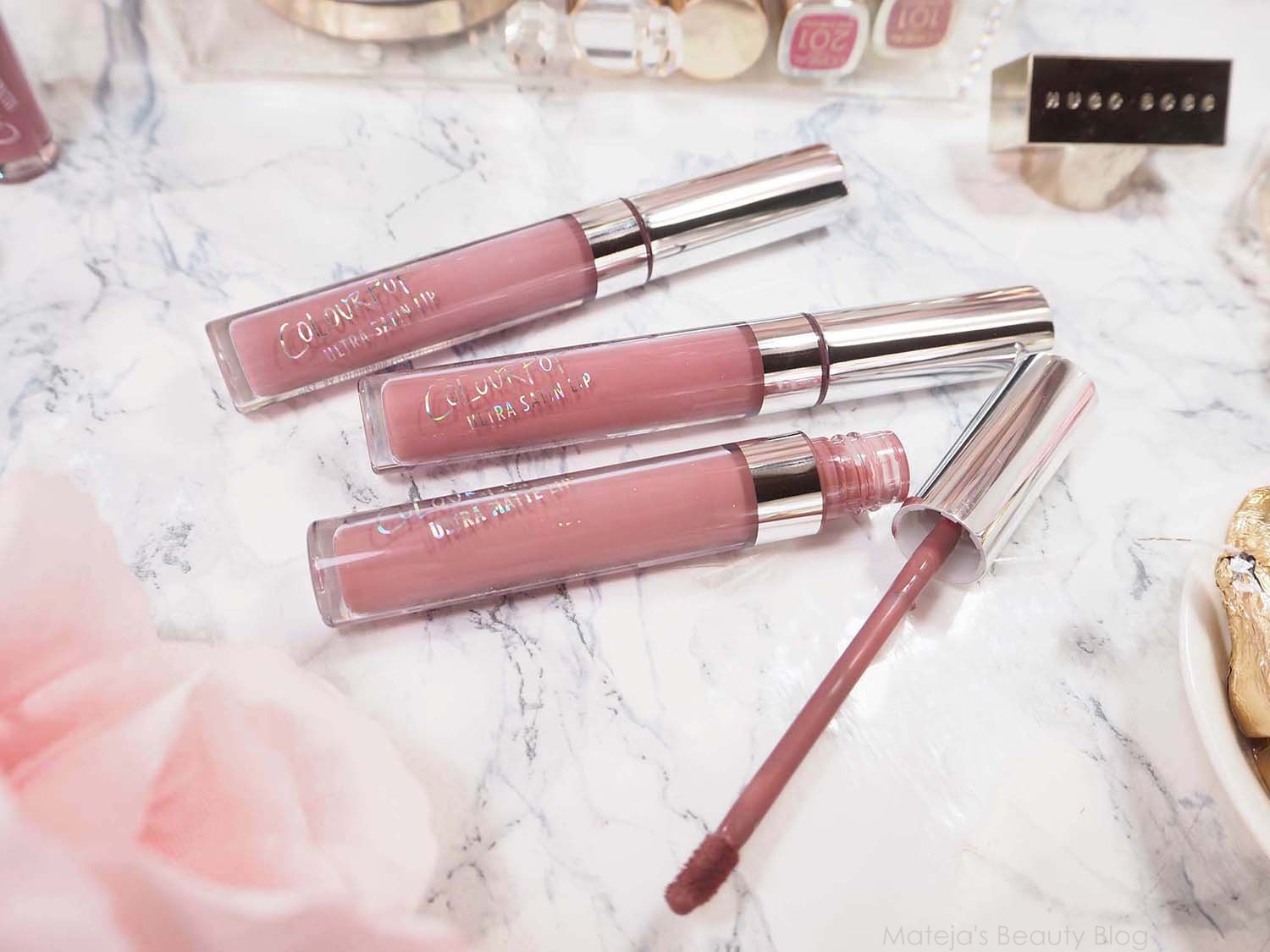 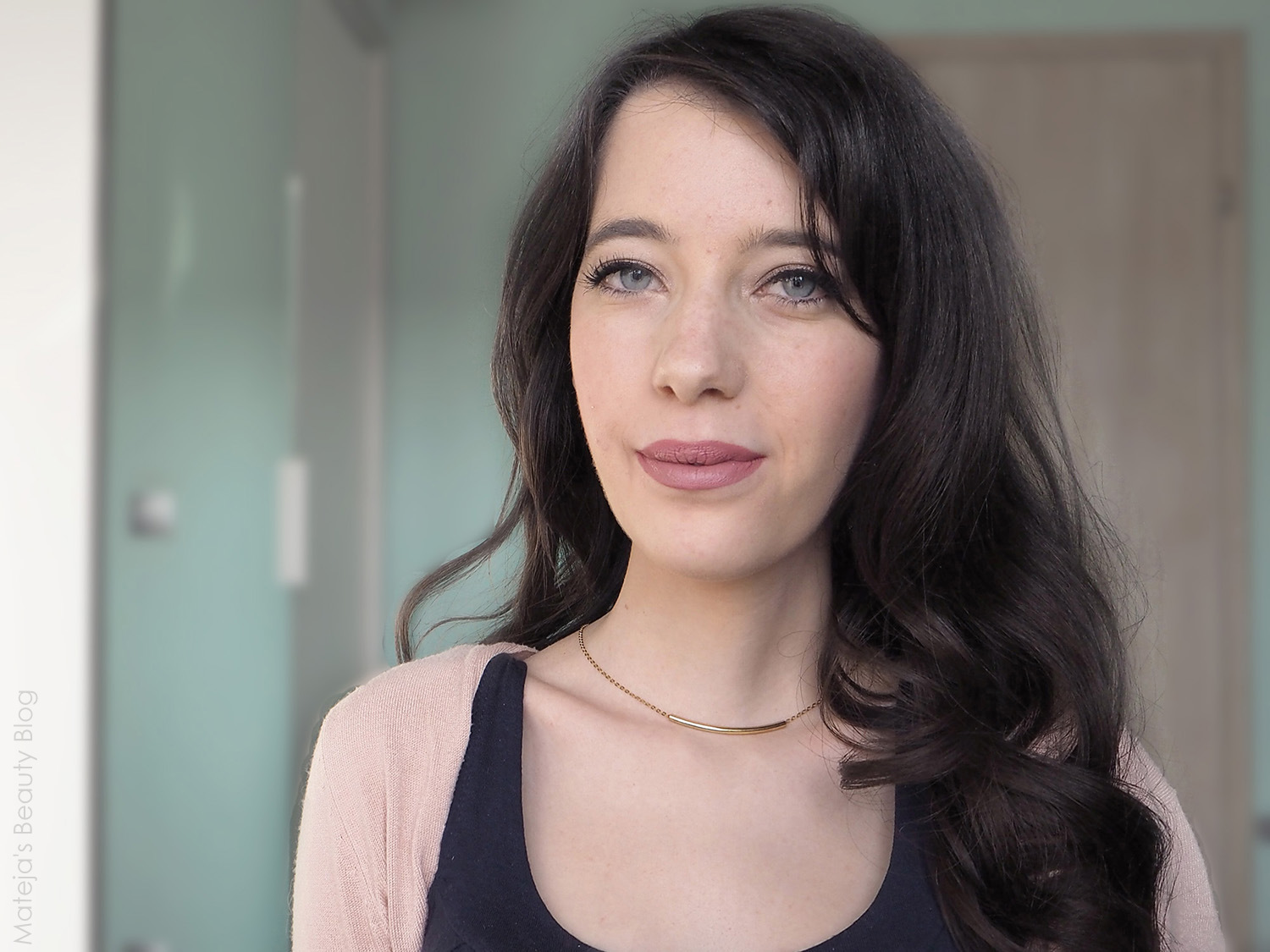 Littlestitious (satin)
is a muted, greyish mauve-pink-lavender. I imagined it a lot warmer based on swatches I found. It applies almost too pale for me, but oxidises to a shade that’s about two tones darker. Compared to Alyssa it’s much cooler and greyer. I don’t think it’s my colour, but it is the type of modern, greyish shade some like to wear. It’s a satin, so it’s a creamy looking on my lips here because I took pictures straight away, but it sets into more satin matte after time. 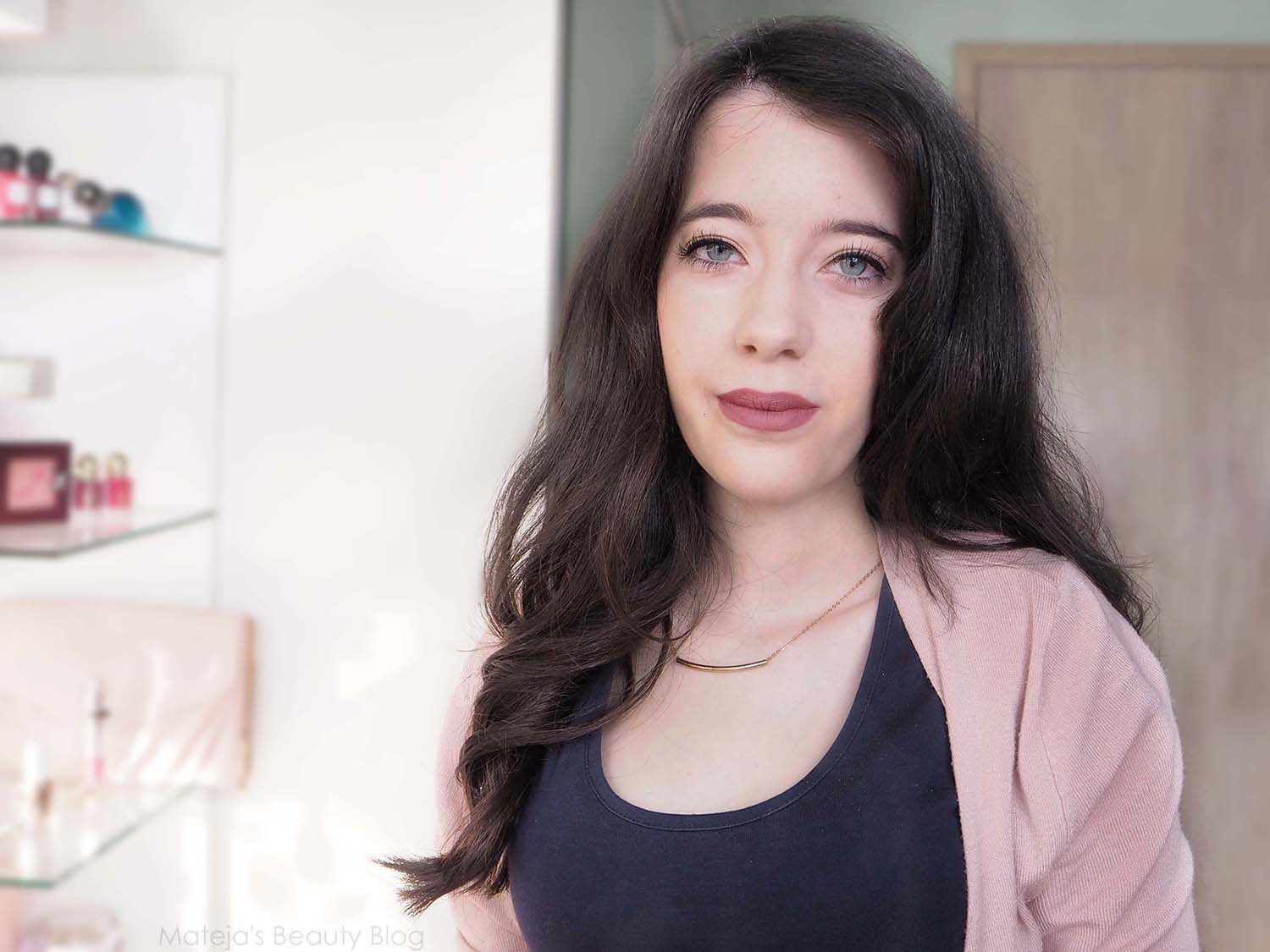 Alyssa (Satin)
is a muted warm pinky mauve shade and it’s the best out of the three that are usually described as similar, so Littlestitious and Bianca. 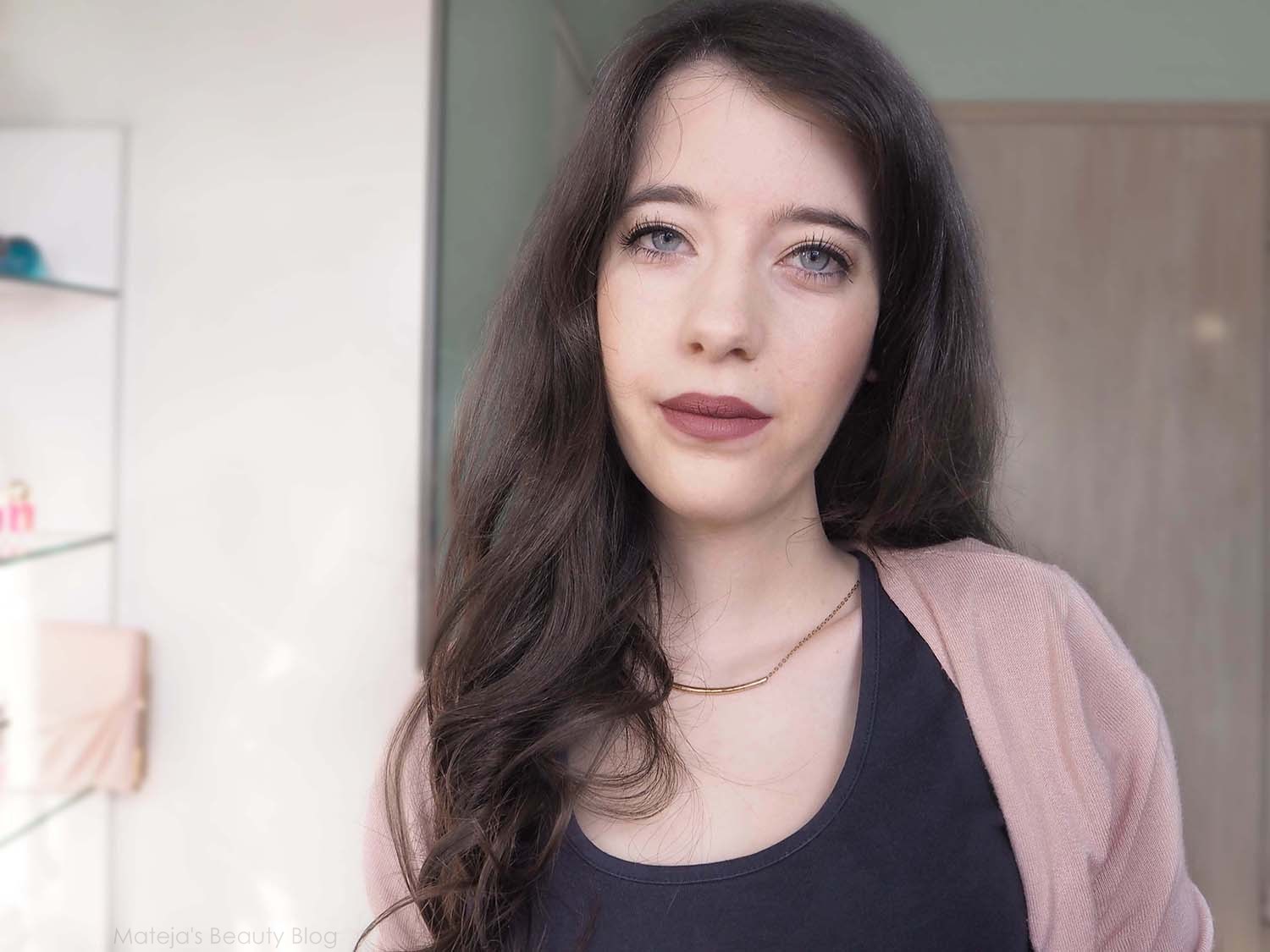 Bianca
is a medium beige brown shade. It’s completely different than I imagined and I think it’s too brown for me, though wearable. This is a shade that is such a chameleon – it starts light beige, almost the tone of my skin and immediately starts oxidising as it dries. Then it’s medium cool brown and as more hours pass it becomes an even darker rosy brown. An interesting shade. 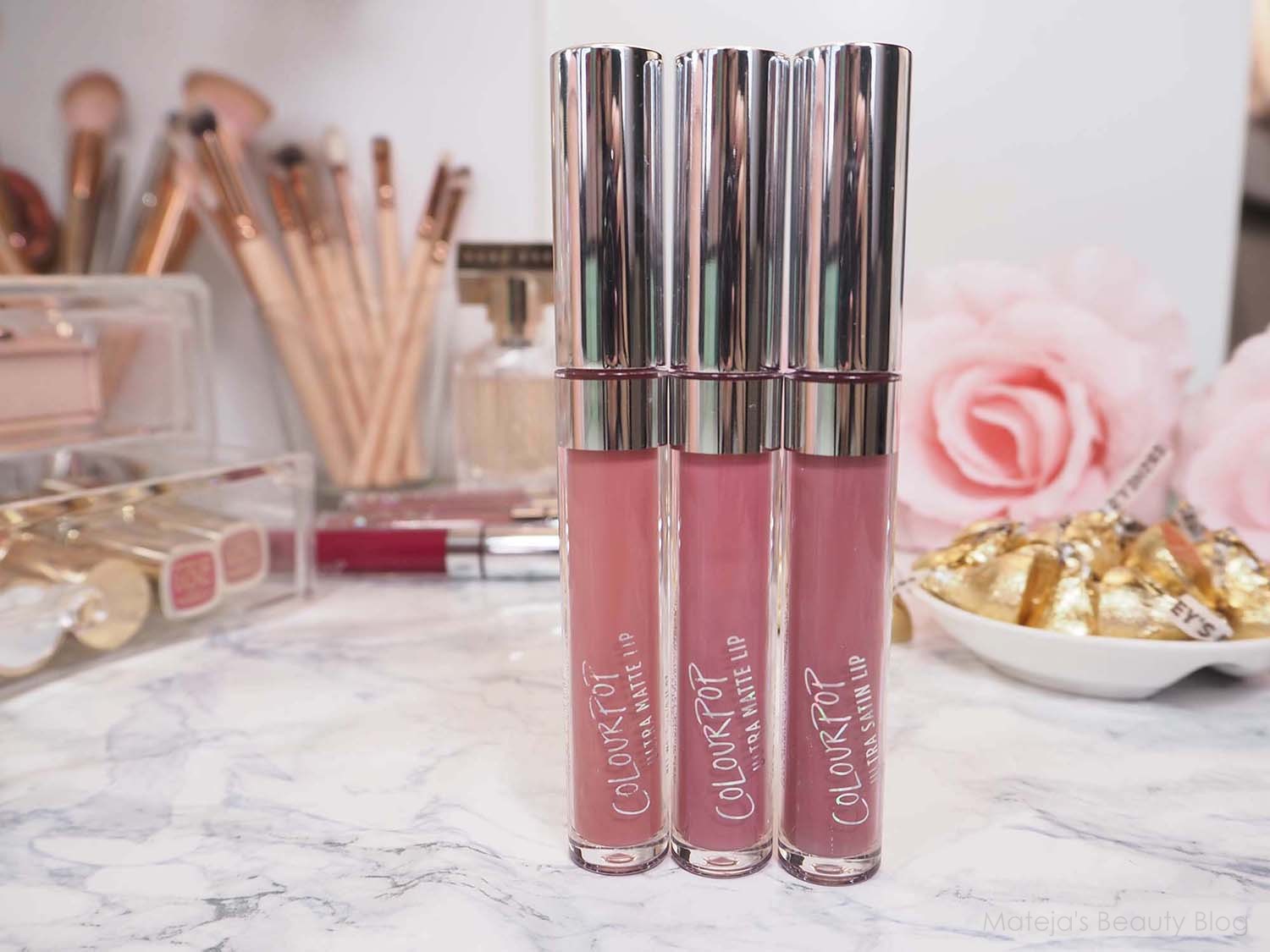 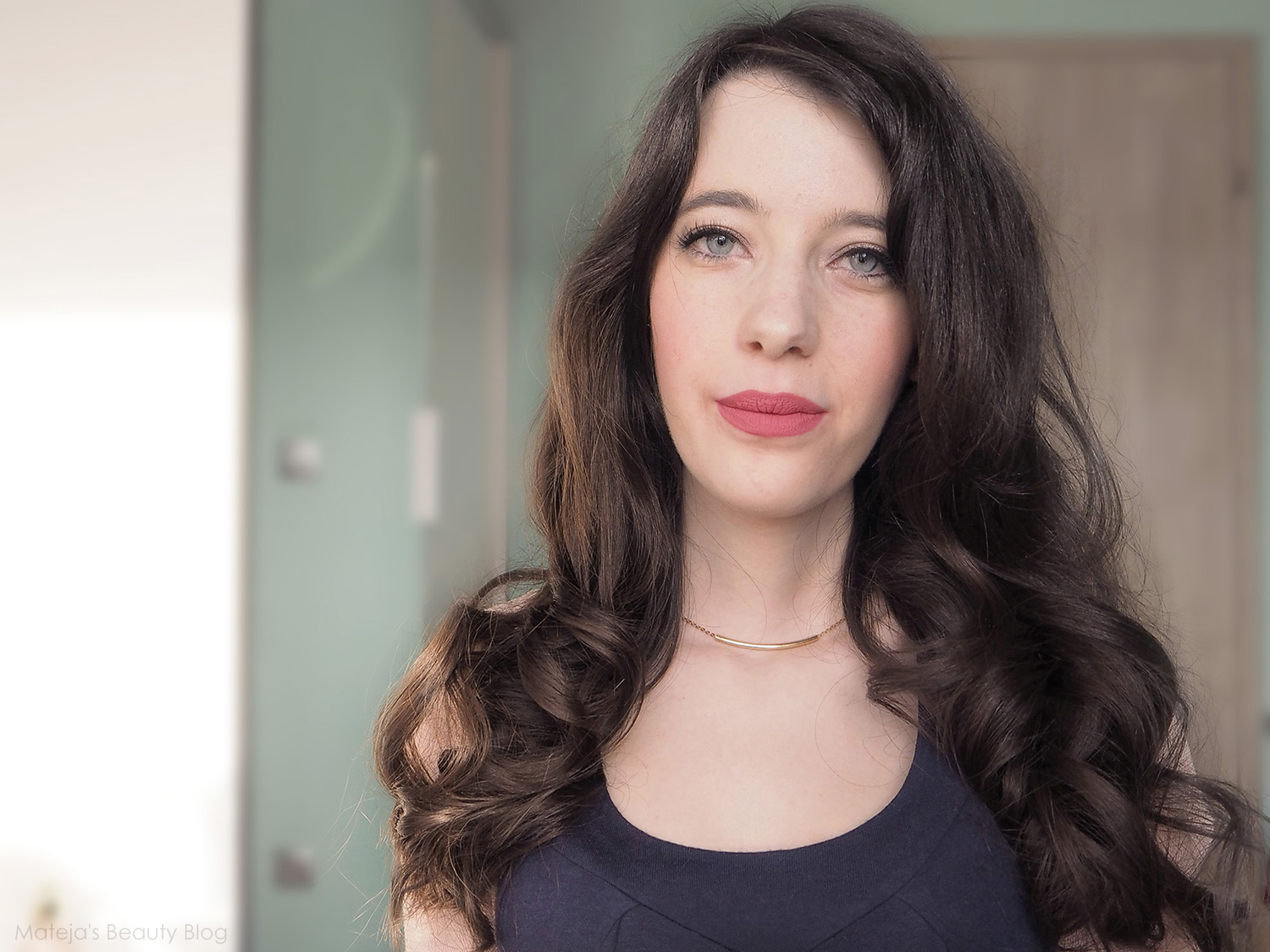 Sollow
is a light muted peachy pink shade, but in the tube it looks completely different, a true peach. It again applies much lighter, but starts to oxidise to a darker, more peachy pink shade. It’s my favourite light one that I got. 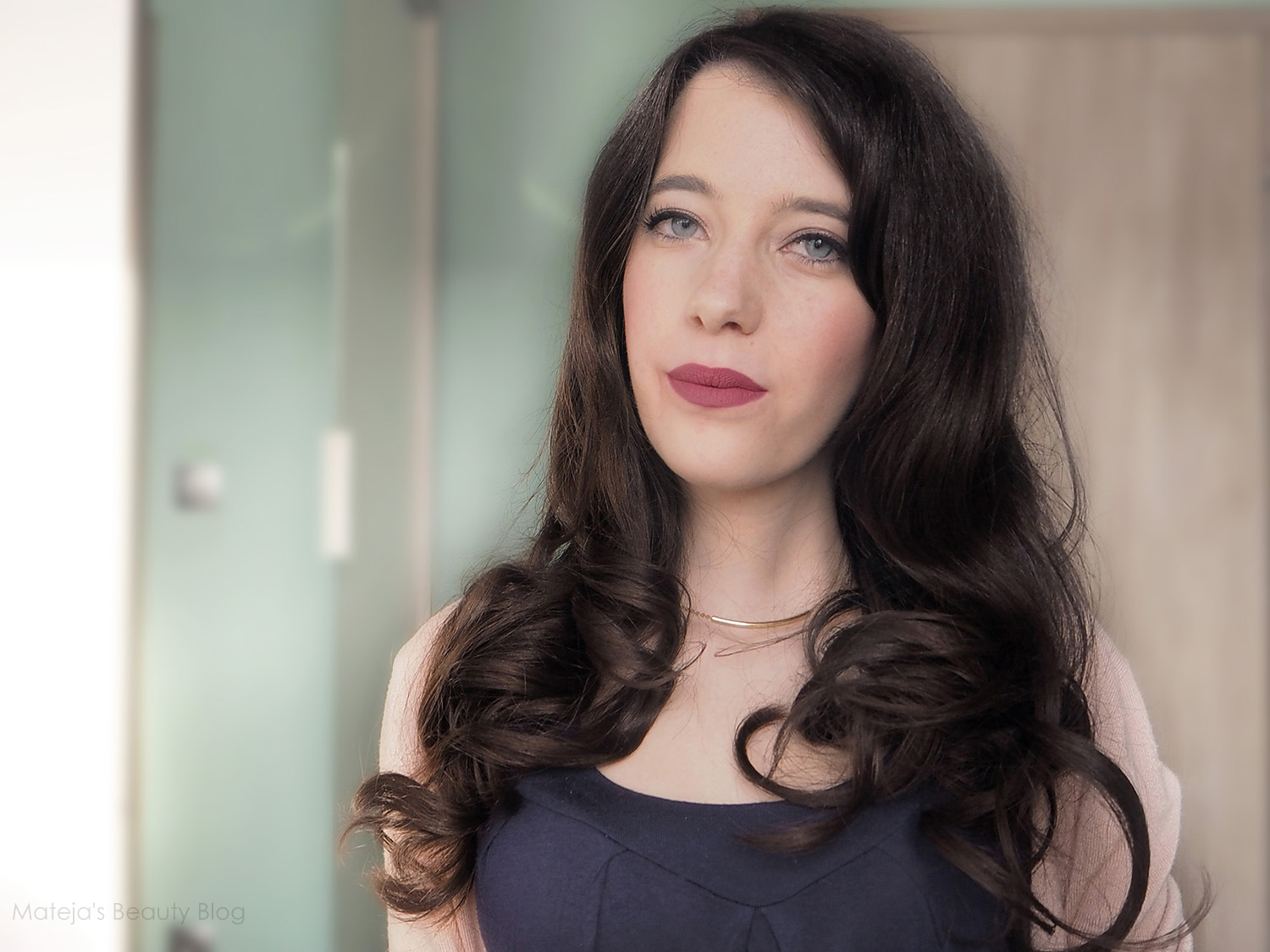 Clueless
is a pink mauve. It’s a shade I again had a hard time capturing because sometimes it looks more pink, sometimes more mauve-violet and sometimes even more brown. Out of my shades its closest to Marvellous Mauve by Sephora, but it’s a lot more pink especially with time on the lips because it oxidises to quite a dark shade on me. 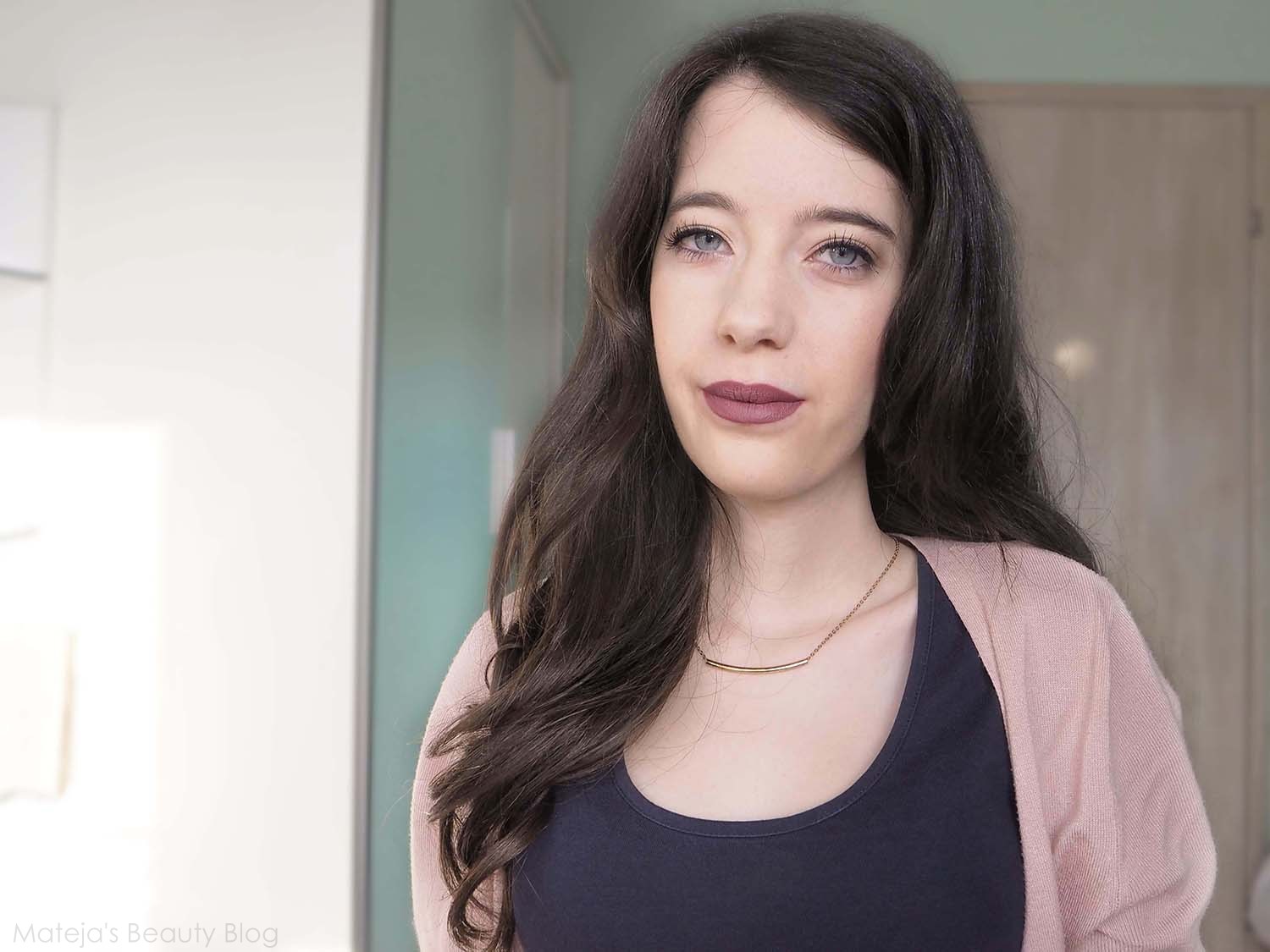 Dopey
is a grey mauve brown shade. Like Bianca it’s again completely different than in the tube or swatches I’ve seen after it oxidises on me. Clueless looks almost the same in the tube, but they are a lot different on the lips. If you’re looking for a typical mauve shade, this is a good choice, but bear in mind that on warmer skin tones, it’ll look more rosy, while on cooler more violet. I don’t think this is a shade for me. 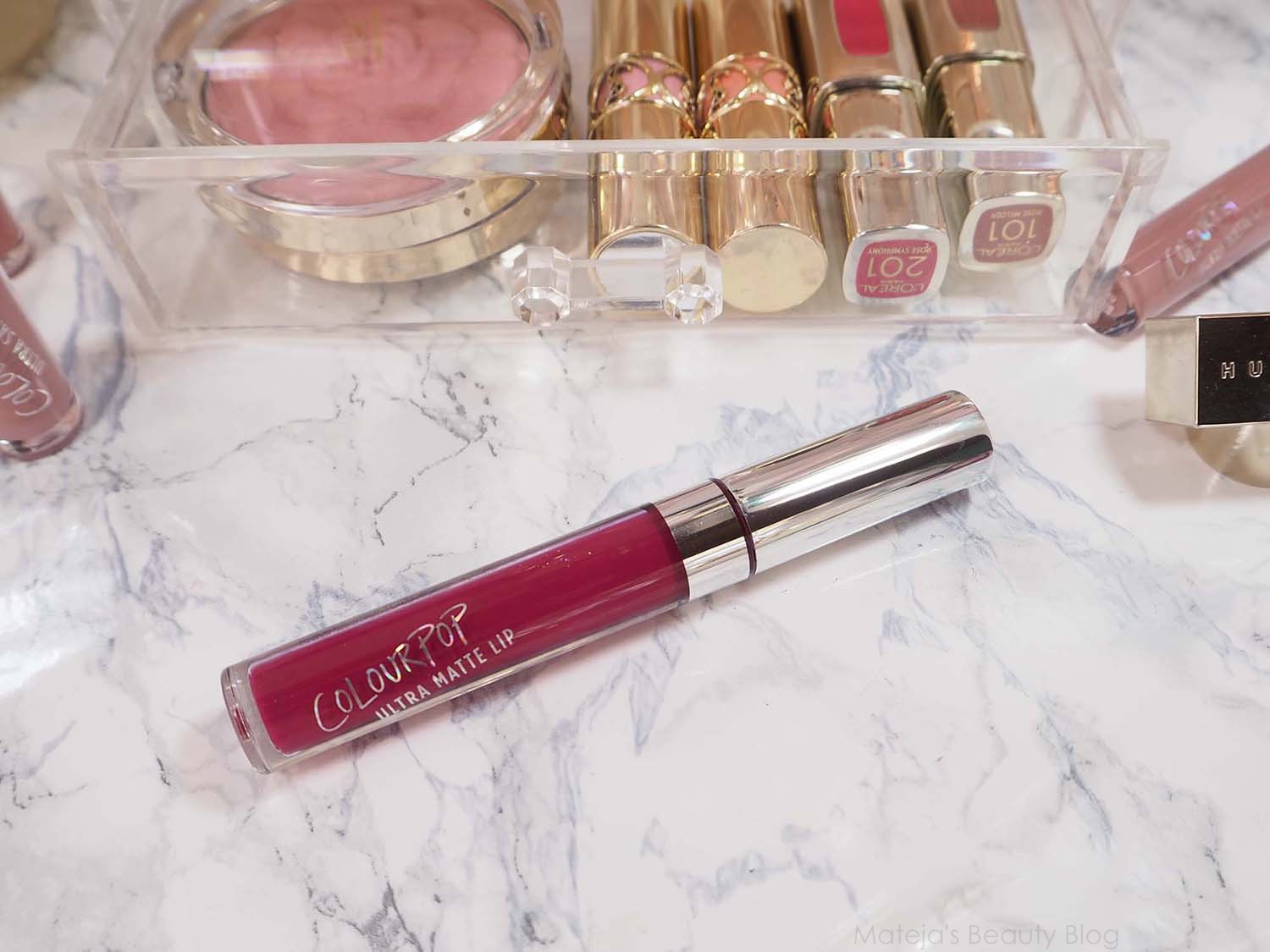 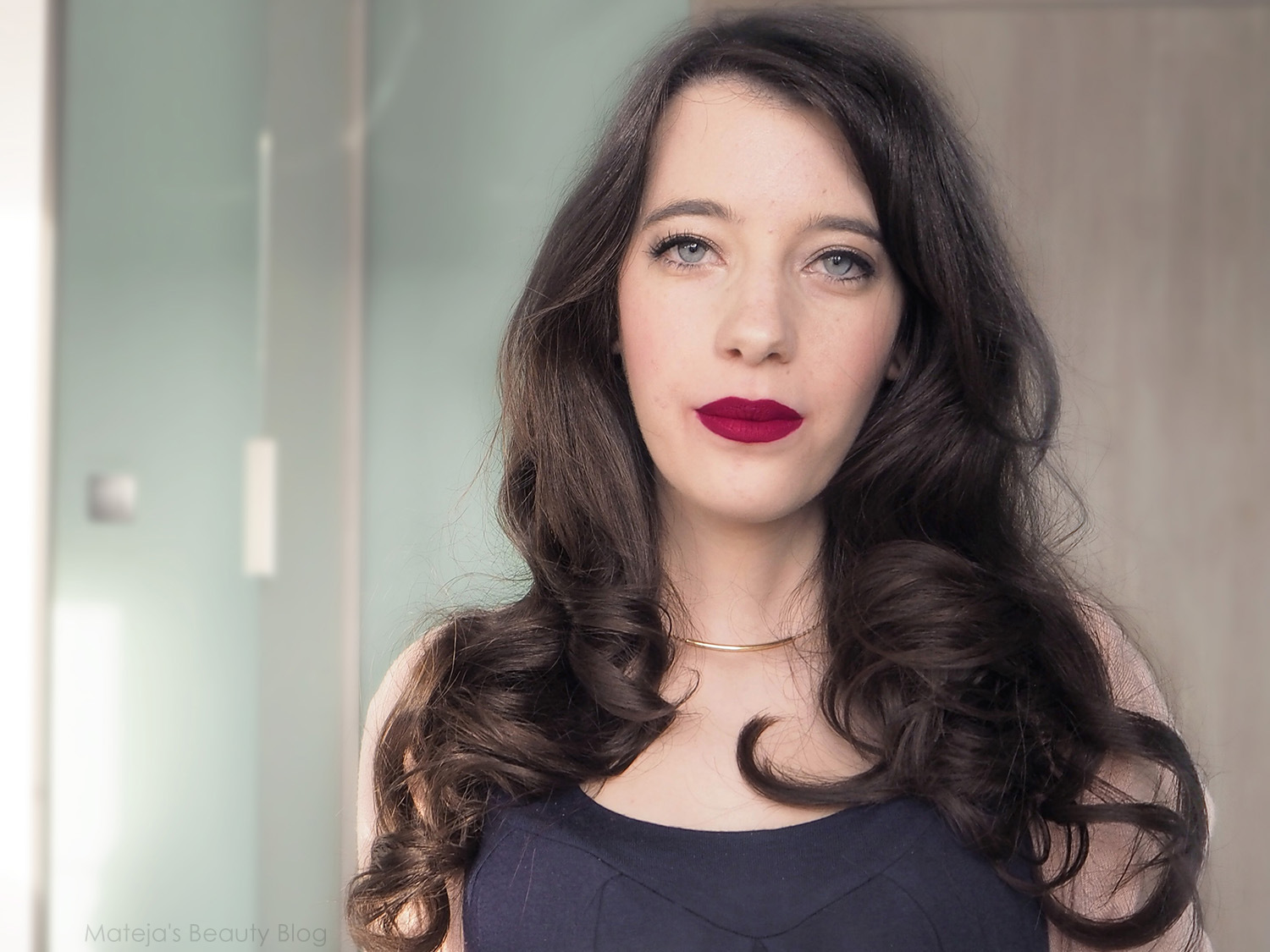 More Better
is a gorgeous, rich deep berry/ deep purple-red, basically my dream shade. Application is completely even, but it’s a shade that can still transfer even after it sets. 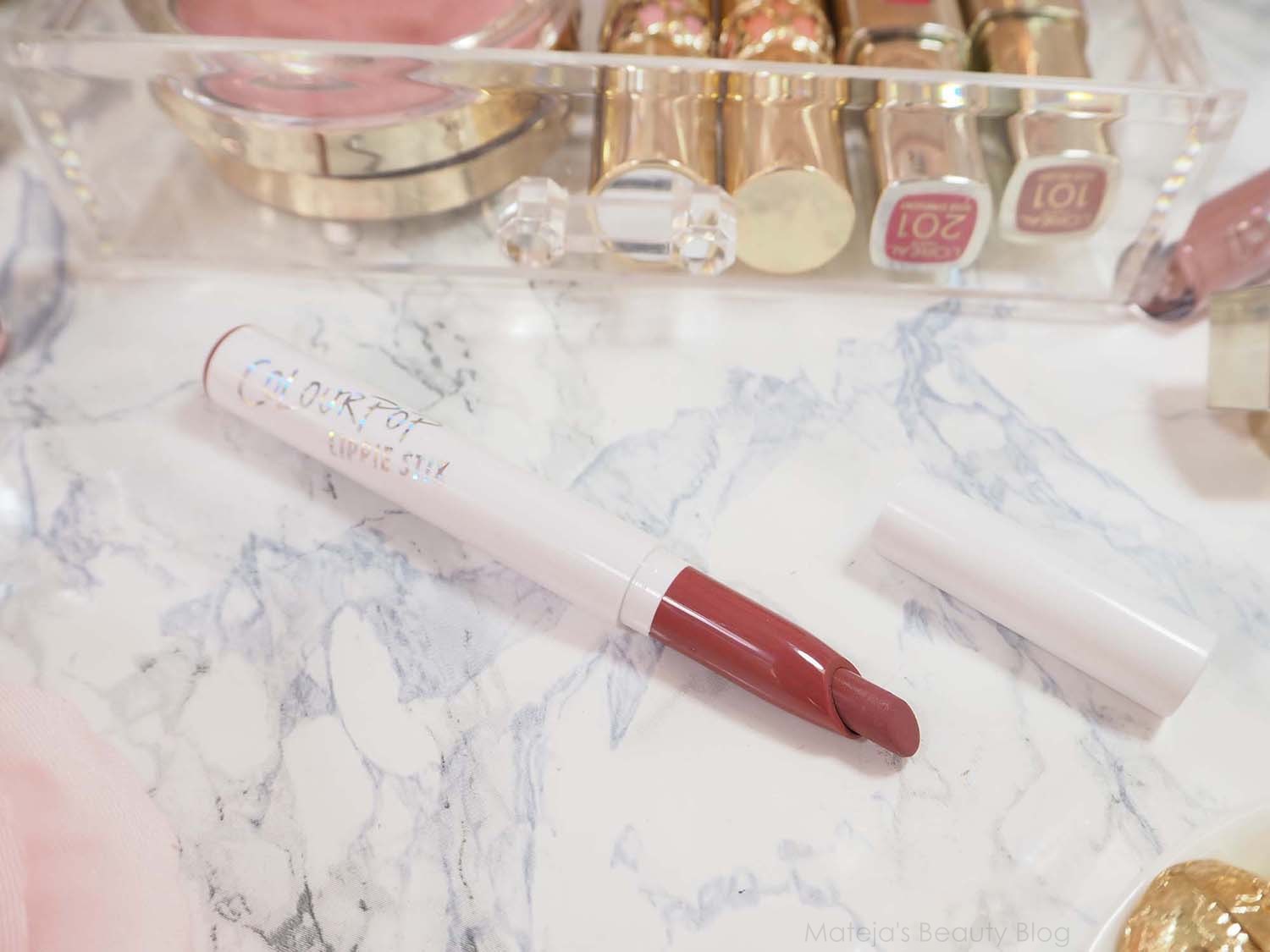 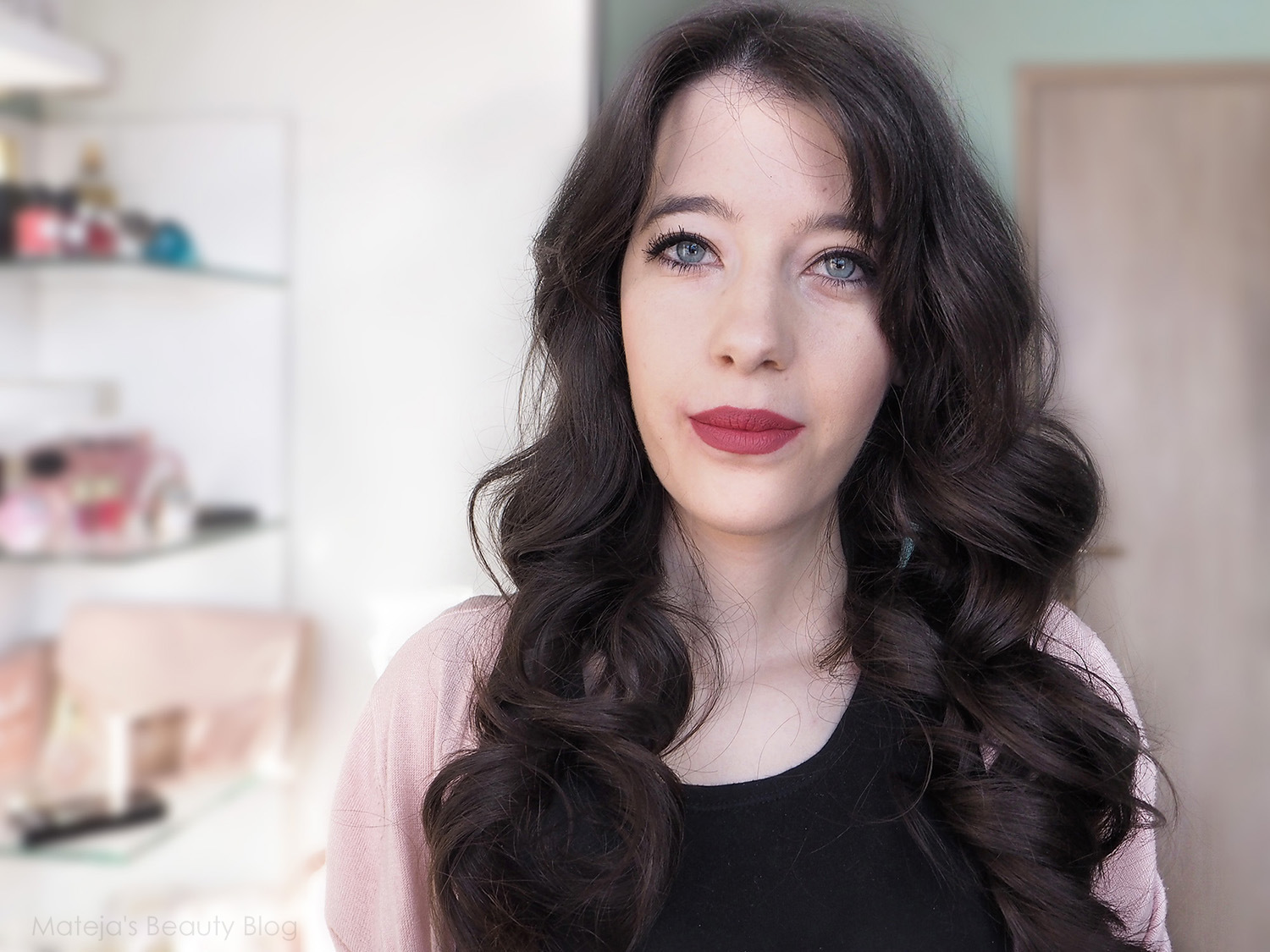 Cami
Is a stunning muted rosy brownish shade and completely unexpectedly my favourite in the bunch. I love the formula, how it wears and the colour on me, so this was a complete win.
Comparisons 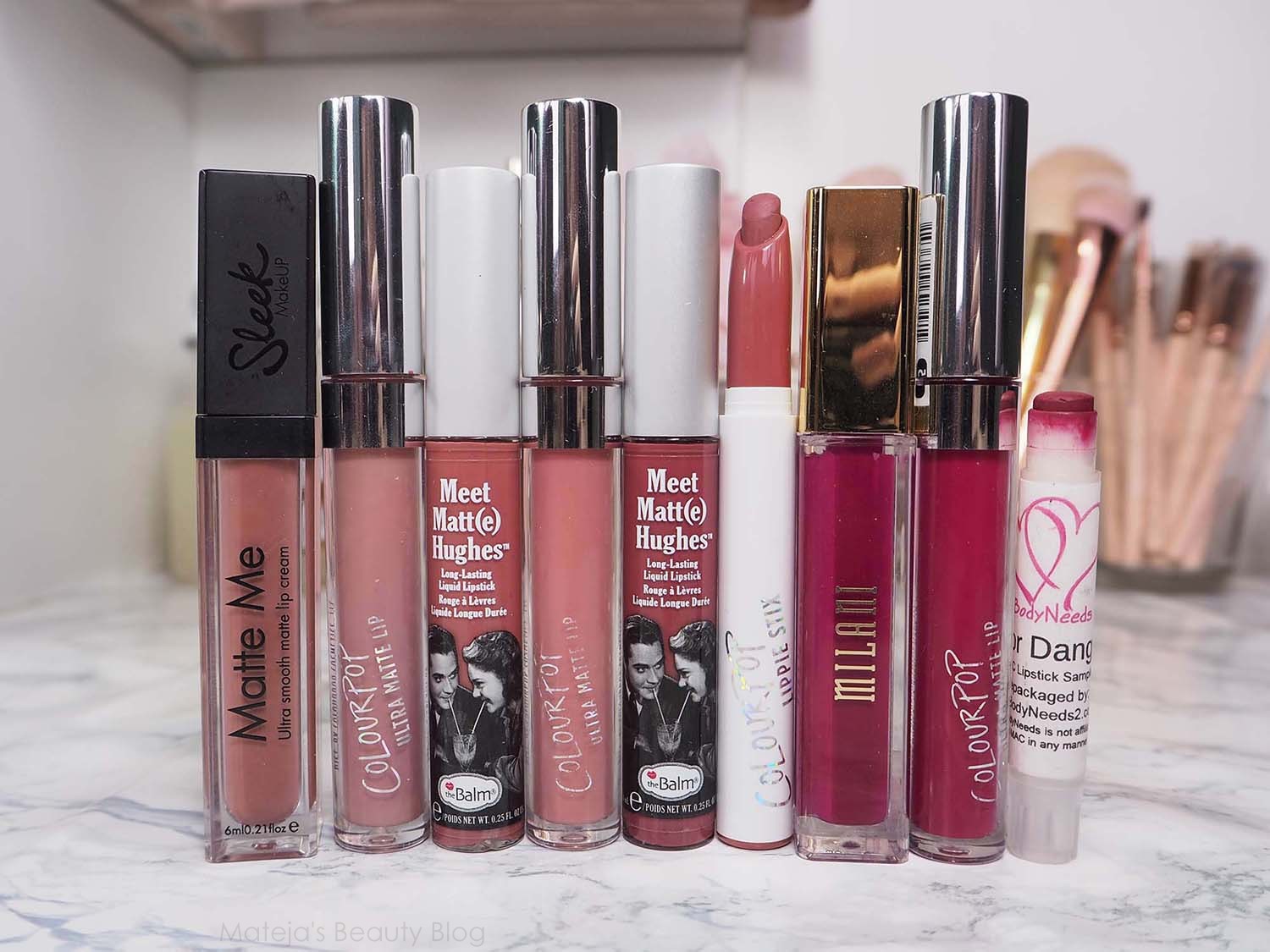 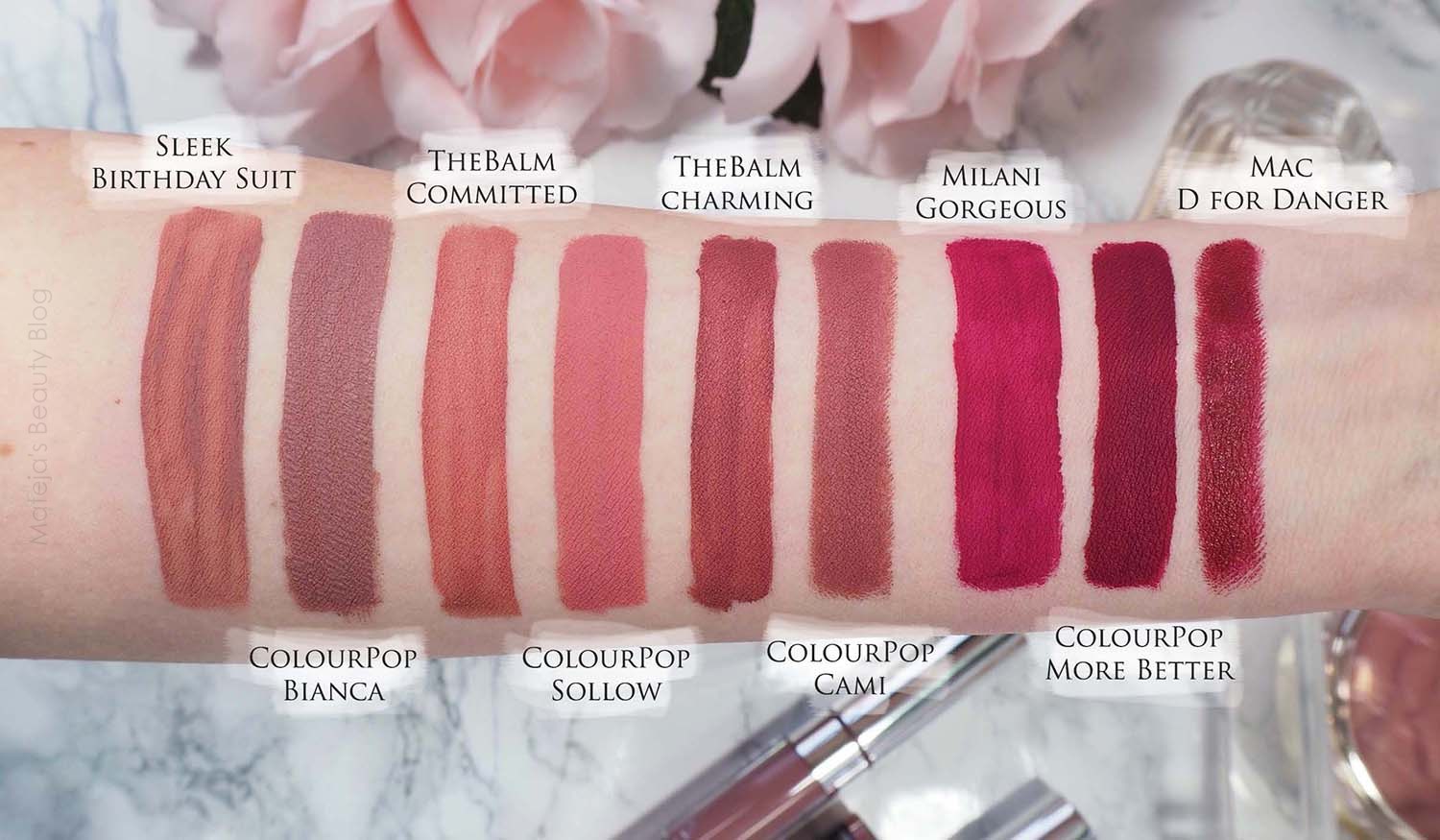 I made a few comparisons, even though some of the shades are completely different, but I did that because they have a similar descriptions.
SLEEK Matte Me Birthday Suit vs. Bianca – I thought these will be similar, but I was wrong. Sleek’s version is much peachier, warmer and not grey.
THEBALM Meet Matte Hughes Committed vs. Sollow – Pointless comparison because they are so different, but Committed is described as a nude peachy pink, while Sollow is the actual perfect peachy pink.
THEBALM Meet Matte Hughes Charming vs. Cami – Charming is darker, slightly rosier and warmer than Cami. It think the supposed dupe for Charming is Colourpop’s Bumble. I find Cami much easier to wear, since Charming ends up quite dark on me.
MILANI Amore Matte Lip Creme Gorgeous vs. More Better vs. MAC Lipstick D for Danger – Gorgeous is pinker, brighter, lighter and more properly fuchsia than More Better. D for Danger is much closer, but more red and less purple. 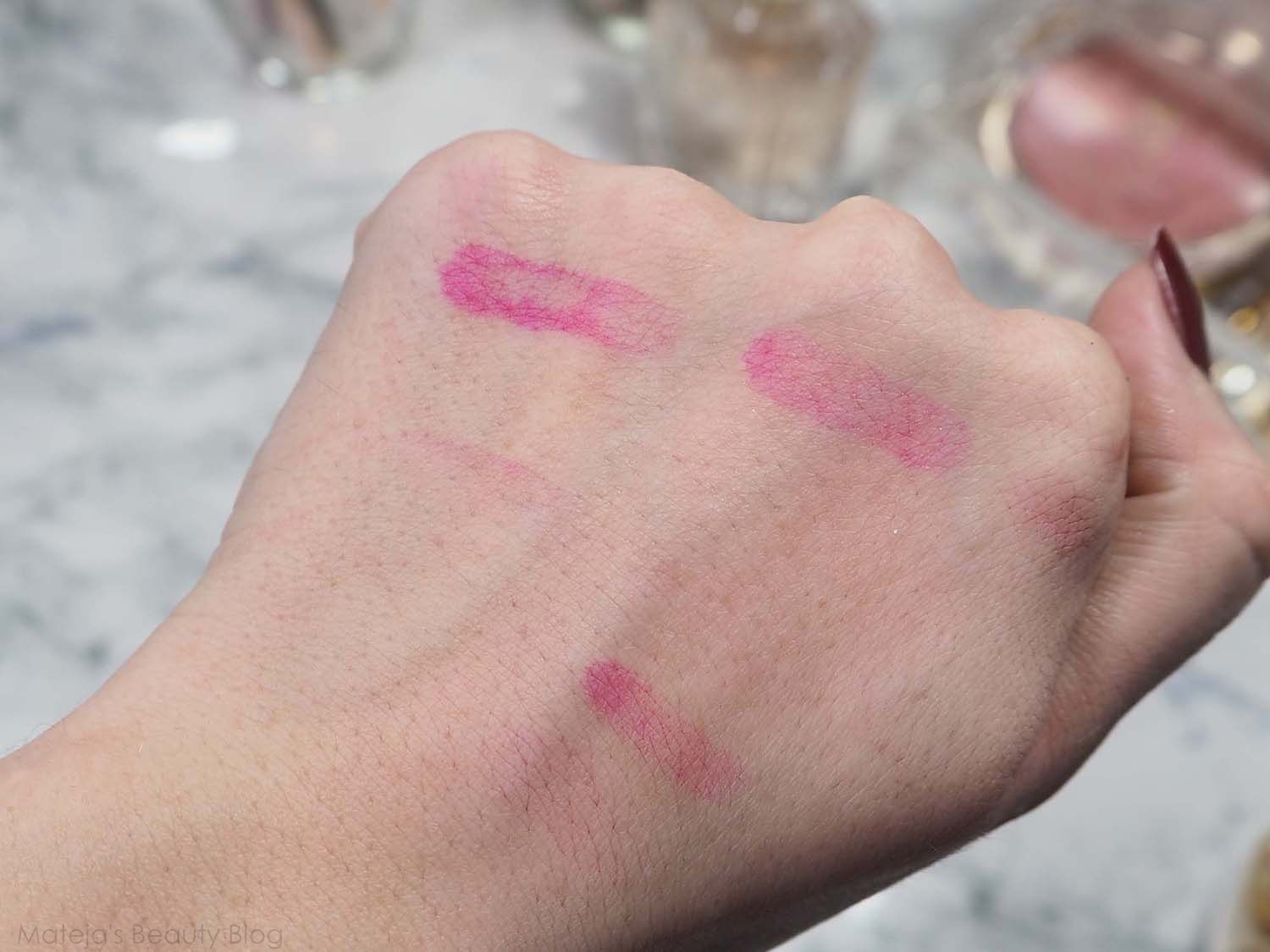 One strange things about these – they stain. And I don’t mean just the dark shades, that would actually be normal, but I mean the lightest shades as well. Here I had the swatches on for an hour and when I removed them, there was a strong magenta stain. Surprisingly, that shade in the top left that left the strongest stain is Littlestitious – the lightest in my collection. Also strongest staining are Clueless and More Better. This tints the dry bits on your lips which remains for a day or two. So yeah, very difficult to remove completely. 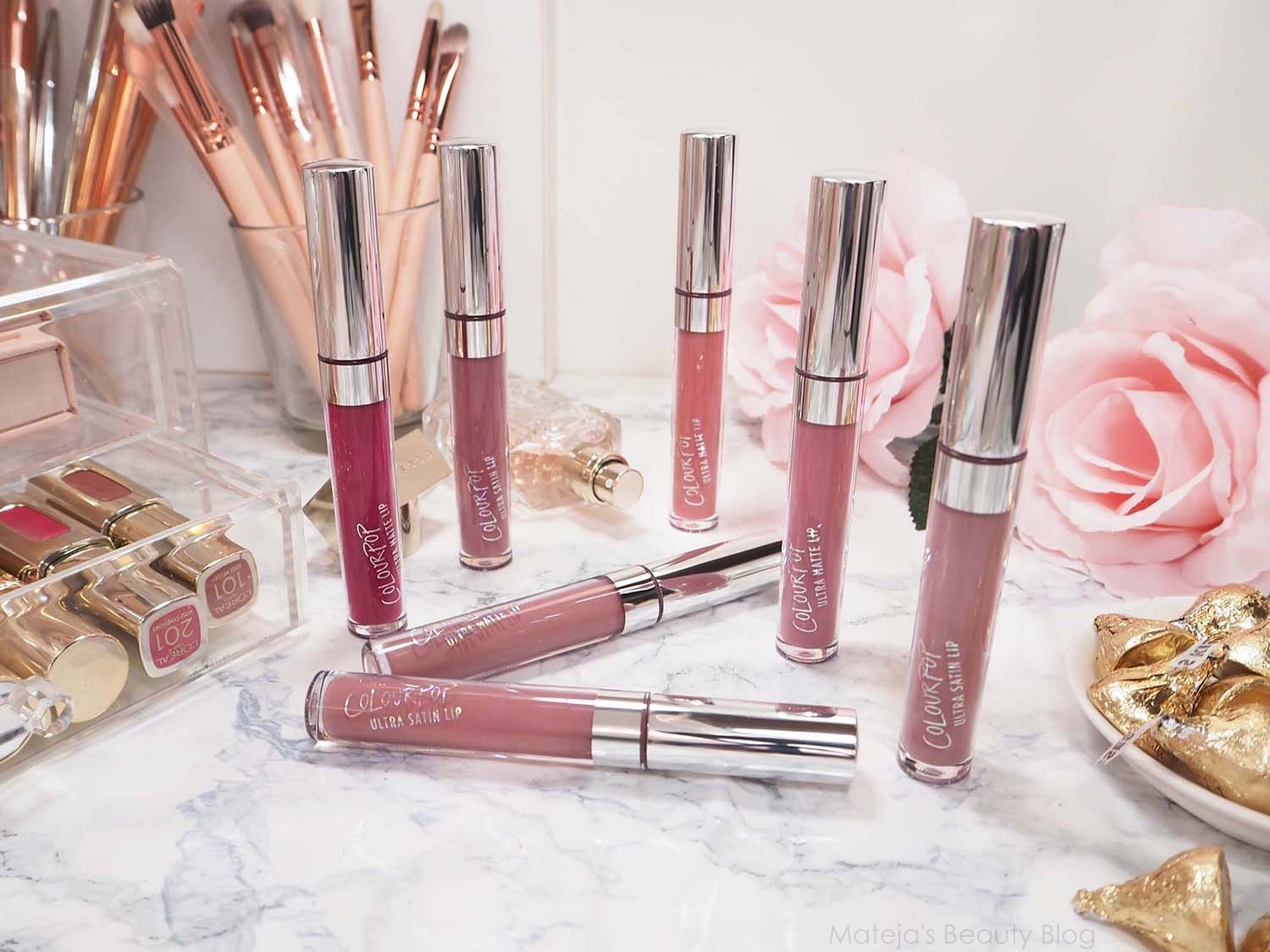 My first recommendation is the Lippie Stix. I know I only have one and it’s a matte one, but the formula is just so amazing. Ultra Satins are a safer bet when it comes to liquid lipstick version, still don’t expect it’s a comfortable as Revlon’s Ultra HD. Ultra Matte are for serious matte finish enthusiasts. They aren’t comfortable, but the staying power and finish win. Affordable prices and tons of colours – I’m starting to like this Colourpop brand, however, they need separate websites for other continents because custom charges suck. 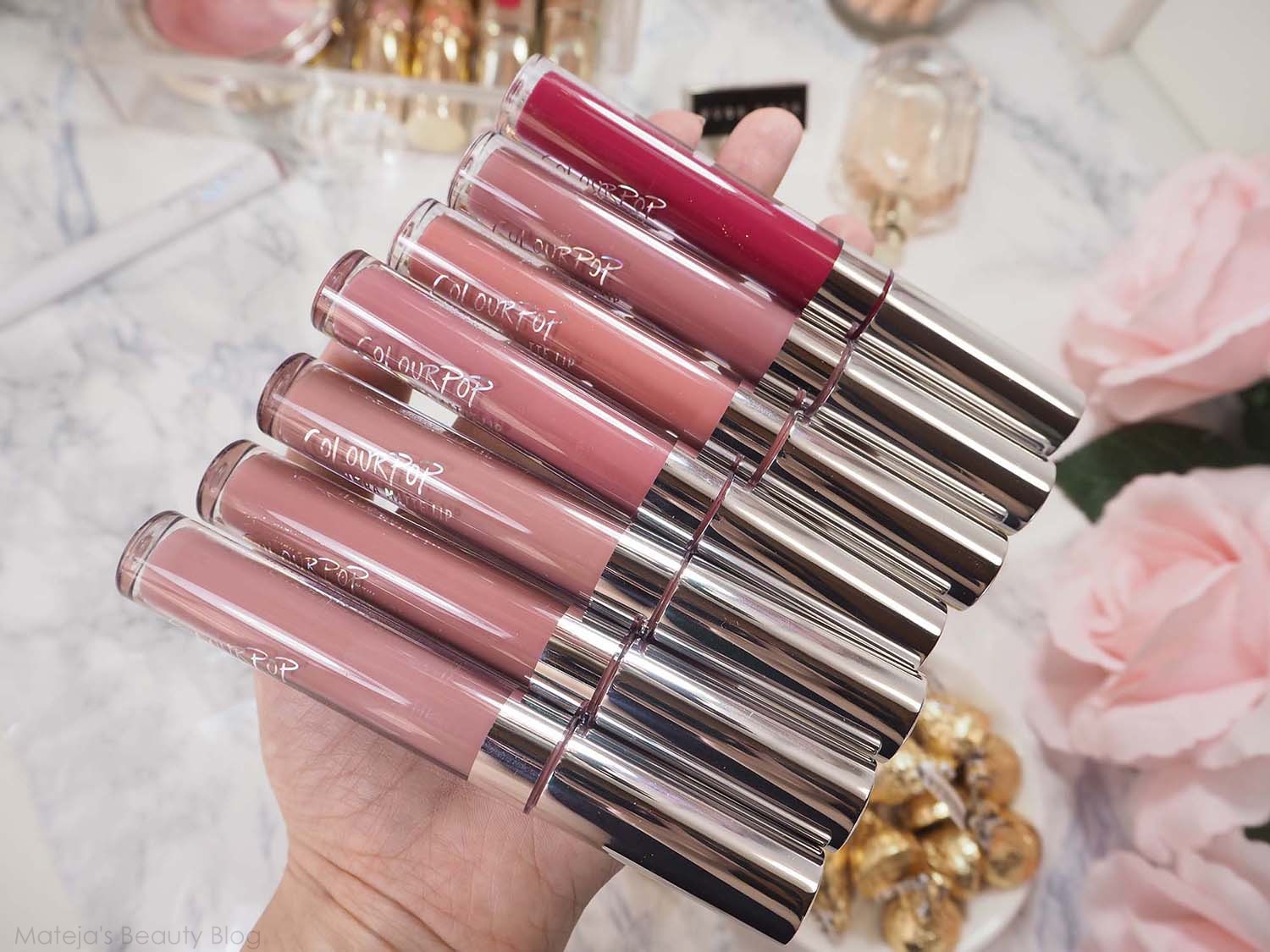 I hope you found this helpful and have a great day!