You are here: Home / Empties / Decluttering my Collection 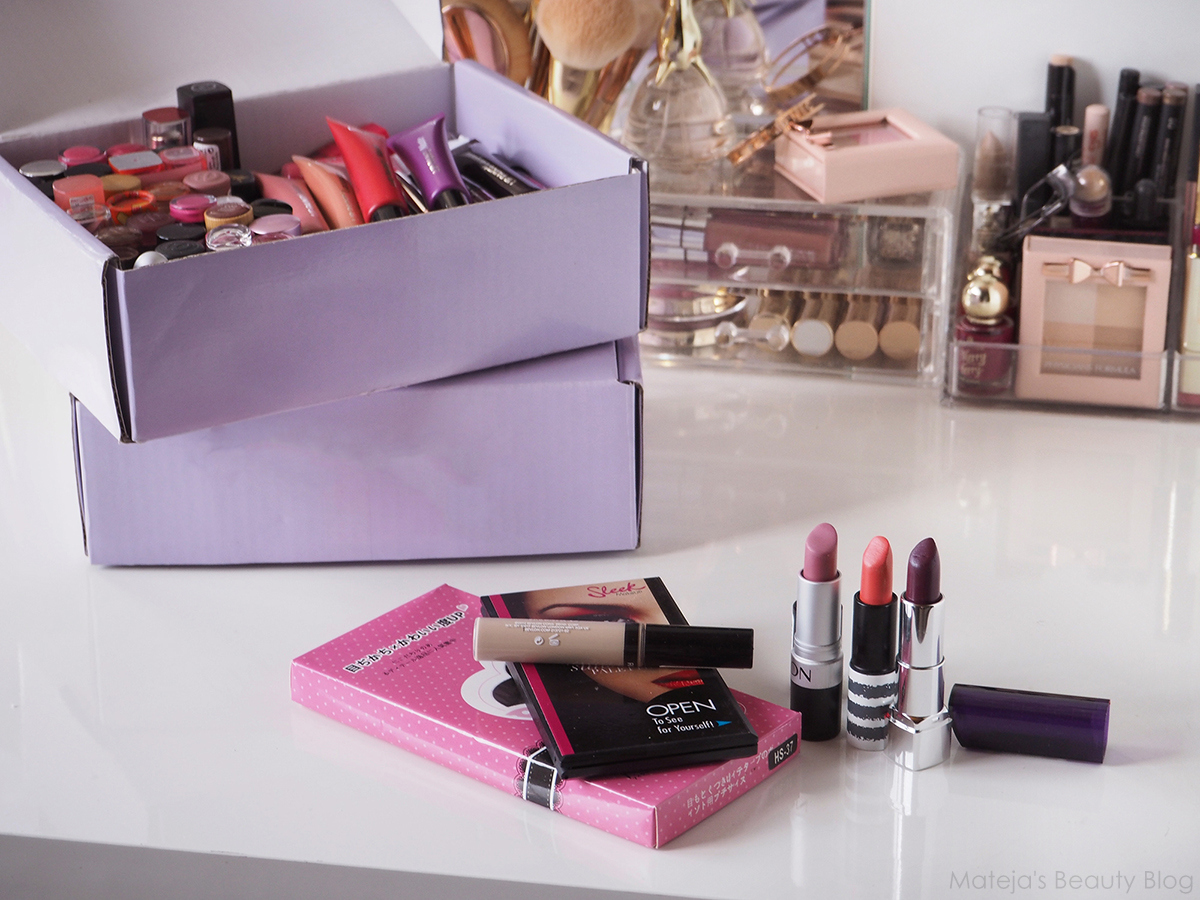 About once a year I go through my collection and do a bit of a purge because even though it might not seem that way, I don’t enjoy having quite such a large collection as some Youtubers boast on their channels. It’s not that there anything wrong with those, but I like to go to the drugstore and still be excited about makeup because there’s still shades and products that I don’t own. I usually include these declutterings in my empties posts, but since this one was considerably more extensive than any time before, I made it into a proper post. How knows, maybe someone is interested in it, though I admit I haven’t sat through one video of these declutterings myself. The current state of my stash is not all my fault – Slovene beauty blogging became more of a thing last year, meaning plenty of PR products were sent out, which honestly I just feel some other blogger would deserve a lot more than me because I don’t enjoy them as much as I do things I pick myself and are on my wishlist, even though a majority of products are lovely and I do truly love some bits (I actually repurchased Max Factor’s Voluptious mascara and use it every day). They just land in my mail box and I feel obligated to do a review even though it takes so much of my time, making me even less happy with that part of blogging. Including the products I had for my blogging job and products I intentional kept for comparisons/potential posts, things got slightly out of hand. So about a month ago I packed all the products I don’t use much, or have dupes/similar products or they don’t work for my skin type/tone and all the rest of the reasons (some things were also really old, but I warned my friends about that and told them to chuck things away if they are too weird) in boxes and took pictures during my destashing. The box went to my friends and family, and I hear they were very happy about it – and I got plenty of chocolate as compensation.
View this as a sort of an empties post where you can gasp and silently judge at the amount of makeup that’s been hiding in my cupboard. Oh, who am I kidding, you probably started scrolling after the first sentence of my useless intro of this pointless post. Just proceed. 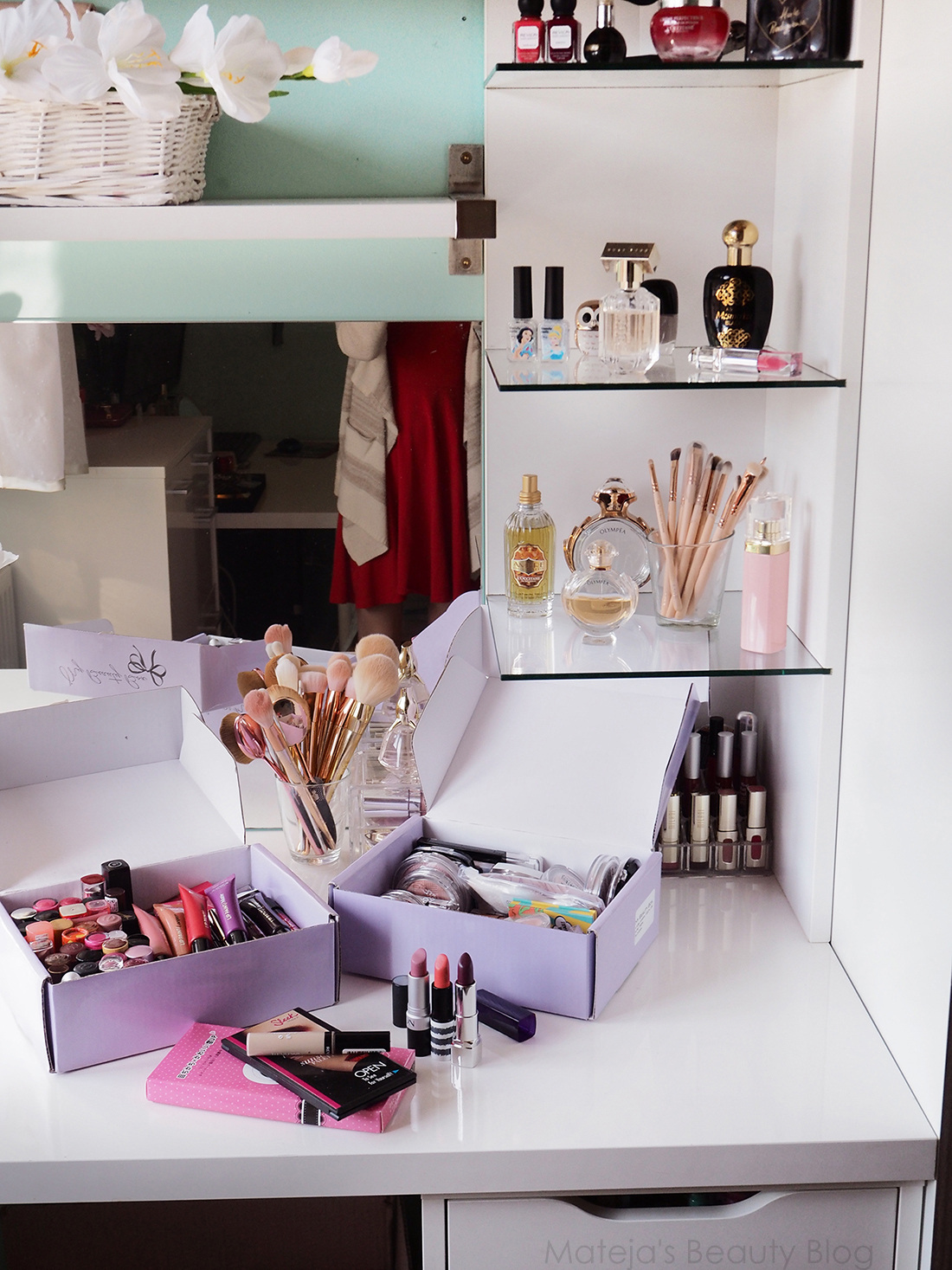 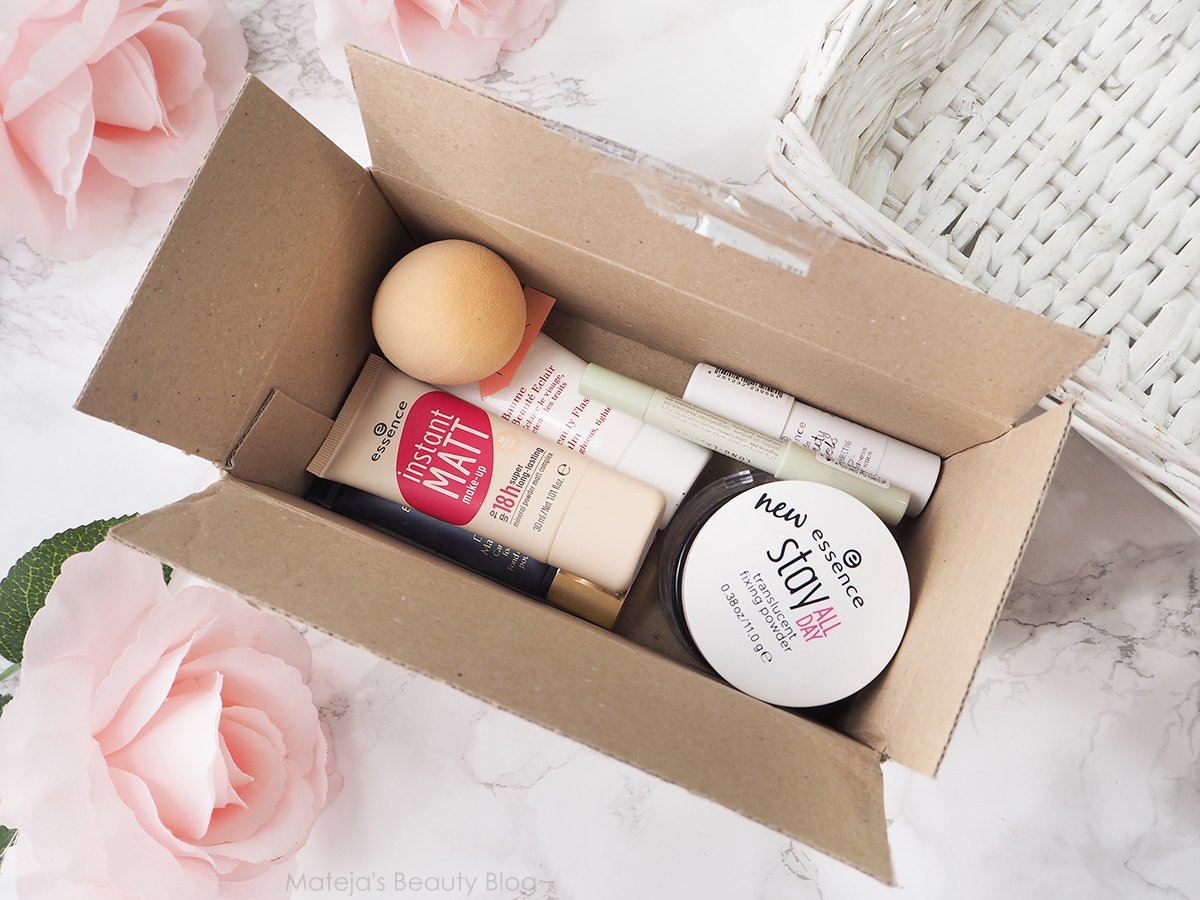 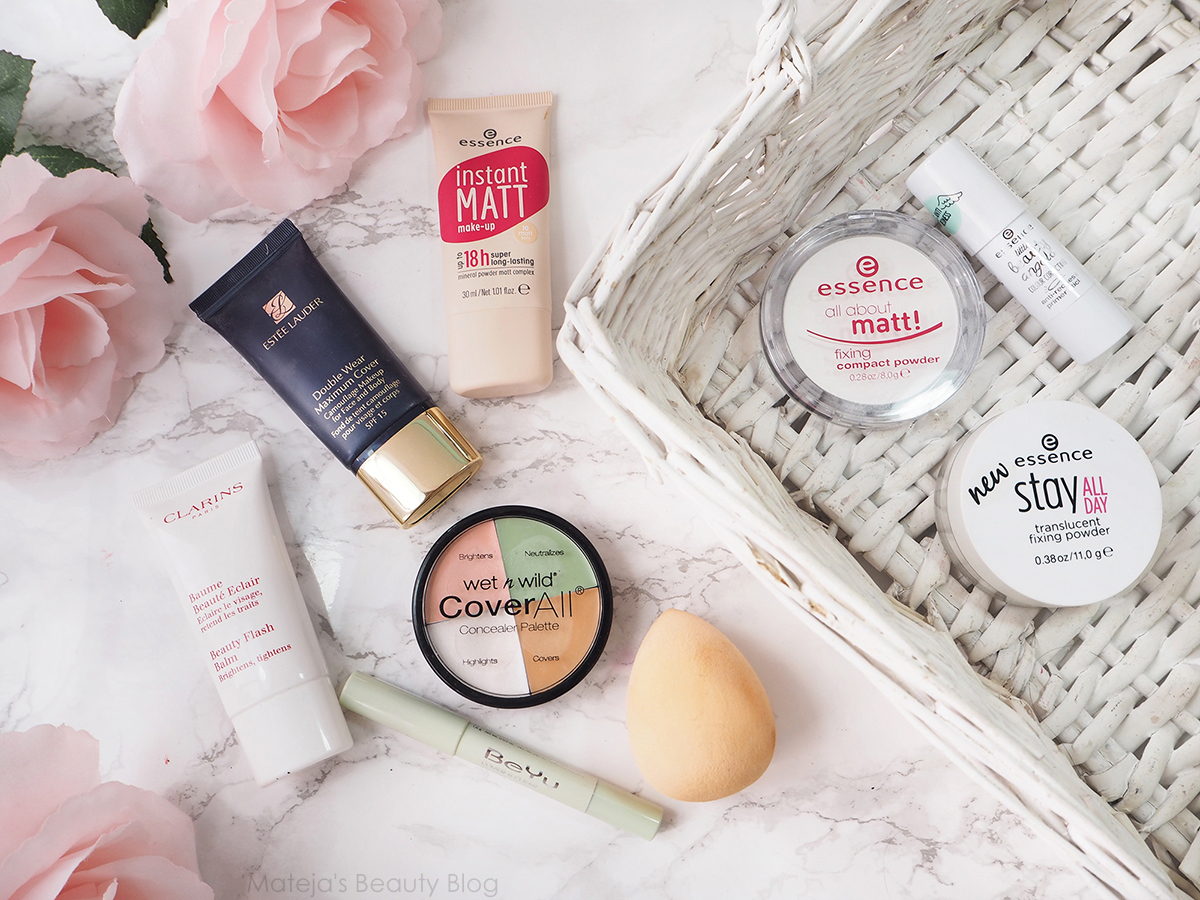 I’m not giving away that many foundations because I use them almost every day and all in my stash, even the dark shades since I have lightening products, but these two are too matte for combination dry skin. I also kept giving Clarins’ Flash Balm new chances, but I just don’t care for it. I don’t use mattifying powders and colour correctors, so those had to go too.
CHEEKS BOX 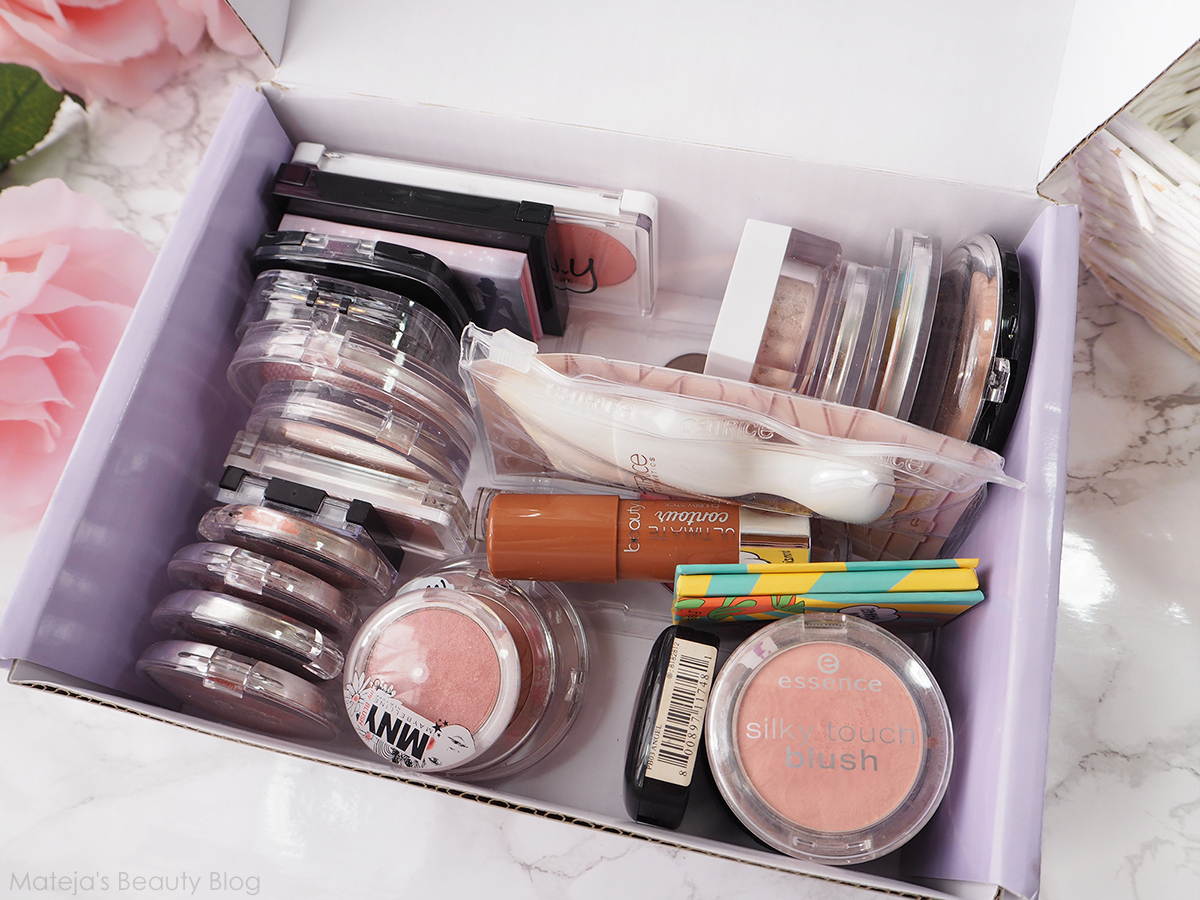 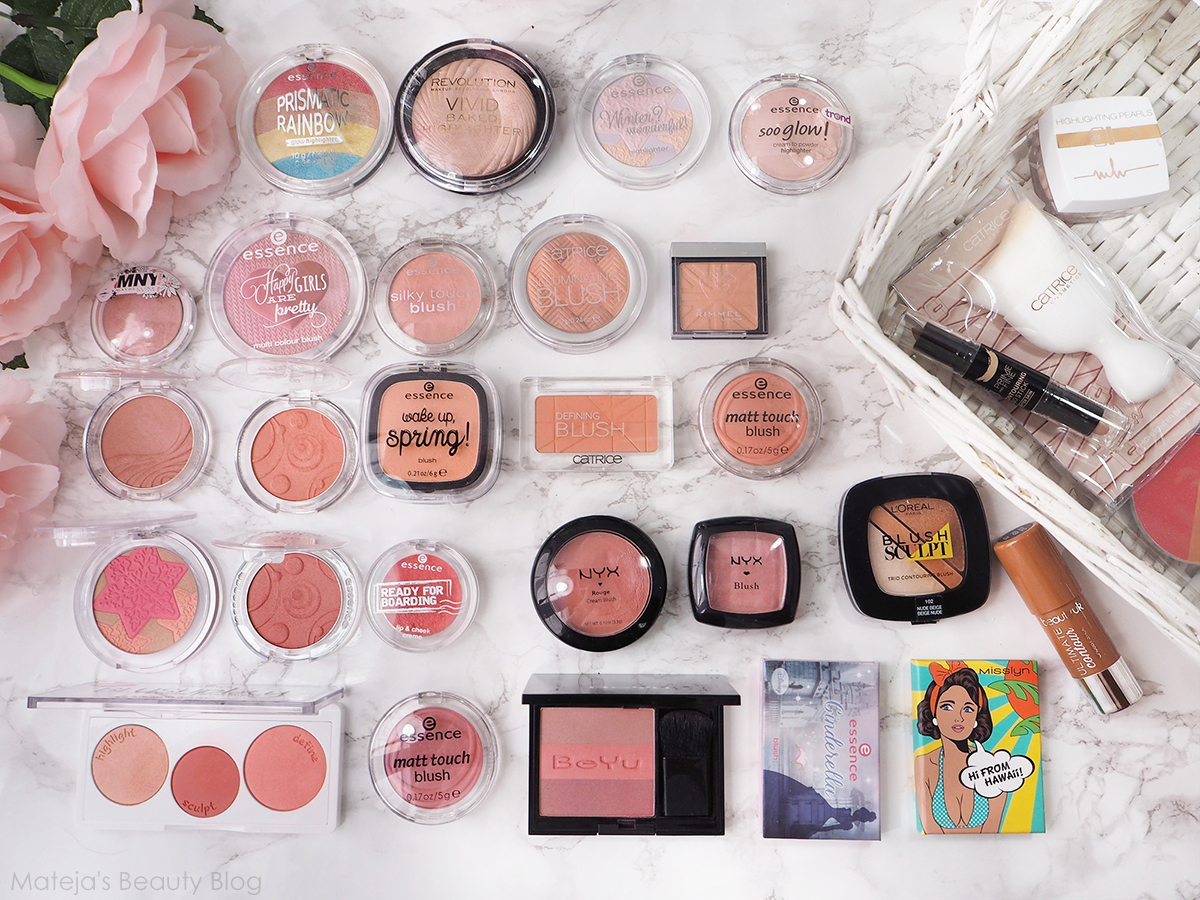 I had to reduce my stash of blushes – I mostly use just my favourites and Essence blushes are just so meh I gave them all away. I know people love them, but I want more from a blush (I adore their cream eyeshadows and mascaras, though). I also trimmed down my peach blushes because I never wear them and I’d prefer someone else to give them the love they deserve (I kept Wet n Wild Apri-cot – that glow is spectacular!). From my highlighters I only use theBalm’s Mary and my ancient Jemma Kidd one, so the rest deserved a new home where someone will use them. Contours and bronzer are of course simply too warm for me.
LIPS BOX 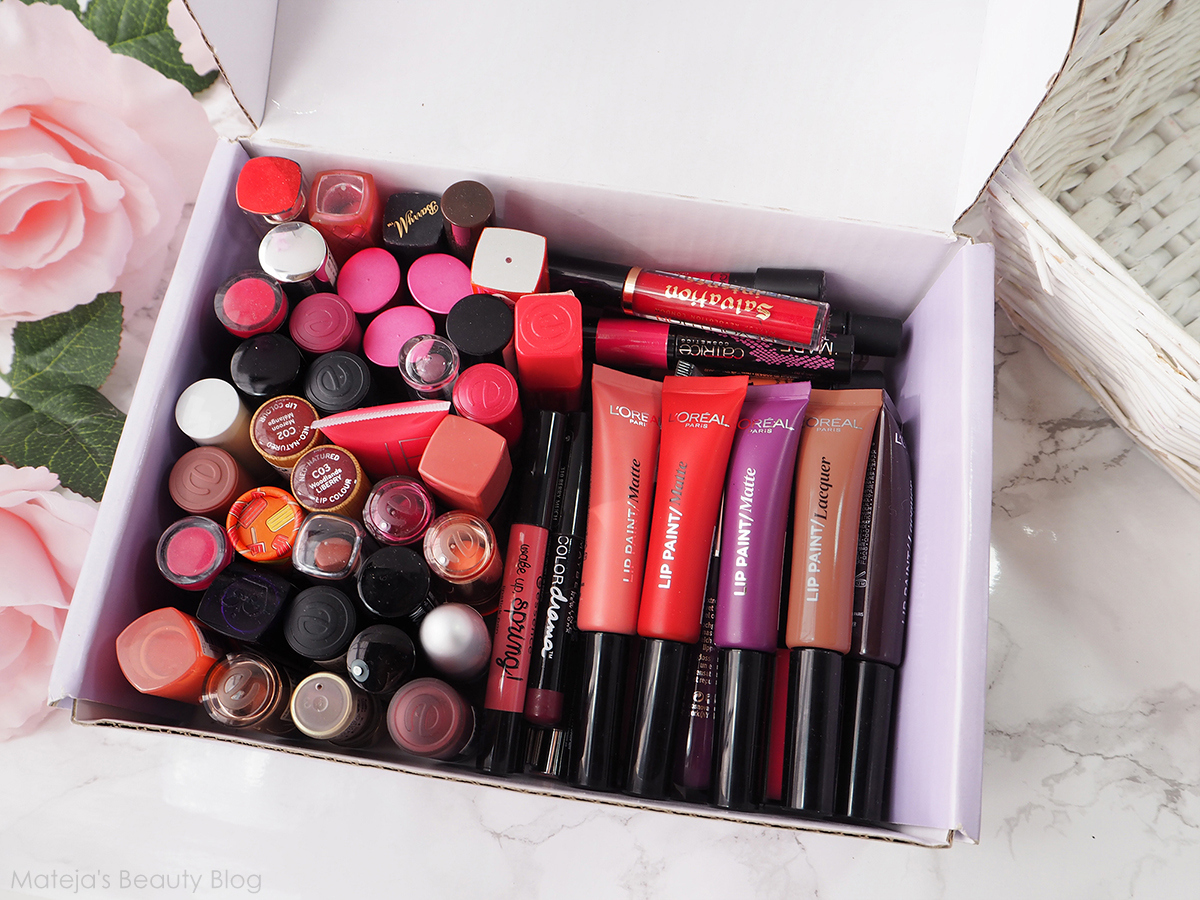 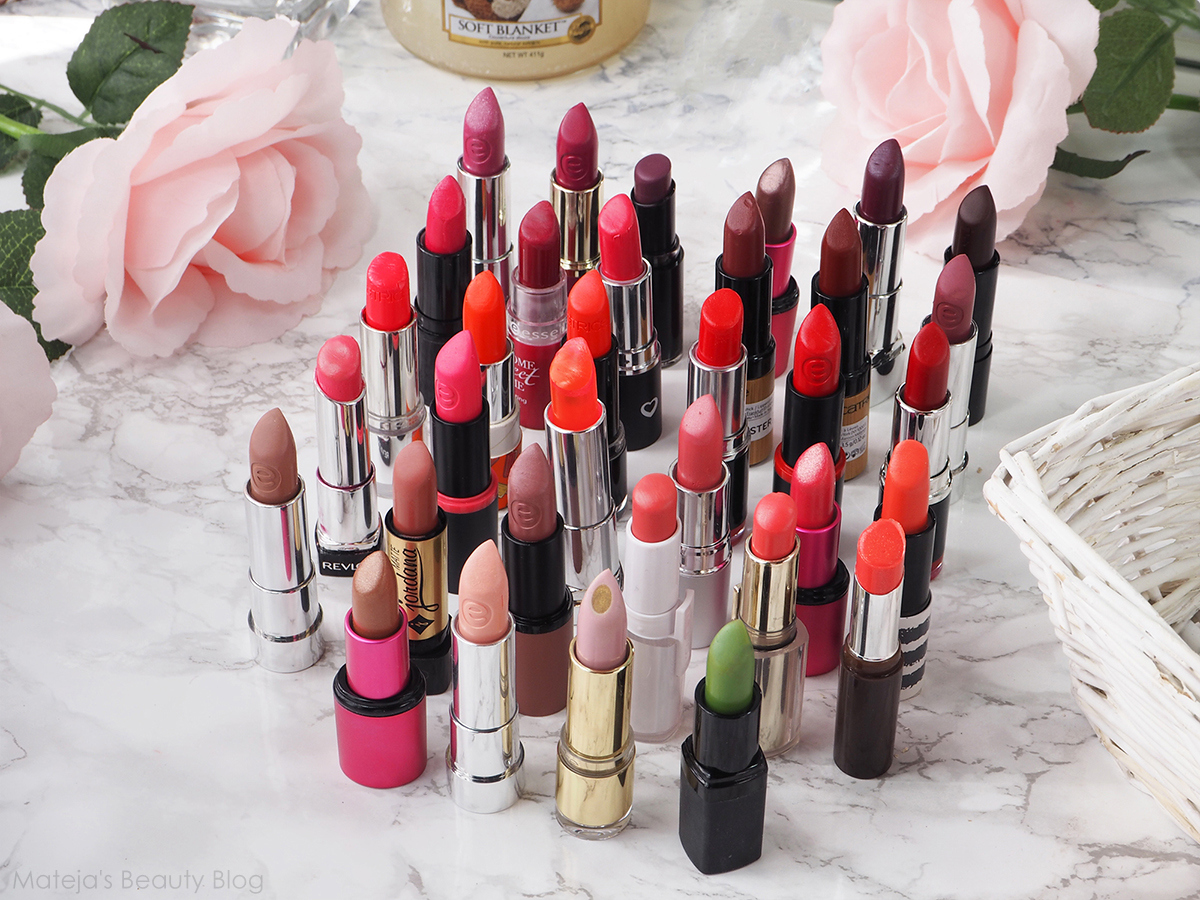 My lipstick stash needed considerable trimming. For one became almost exclusively a matte liquid lipstick girl, but I’ve also fallen out of love with bright lipsticks. I just find them too much and I rarely wear them. A lot of these were also PR products, meaning shades weren’t picked by me, so they were only used to make a review. 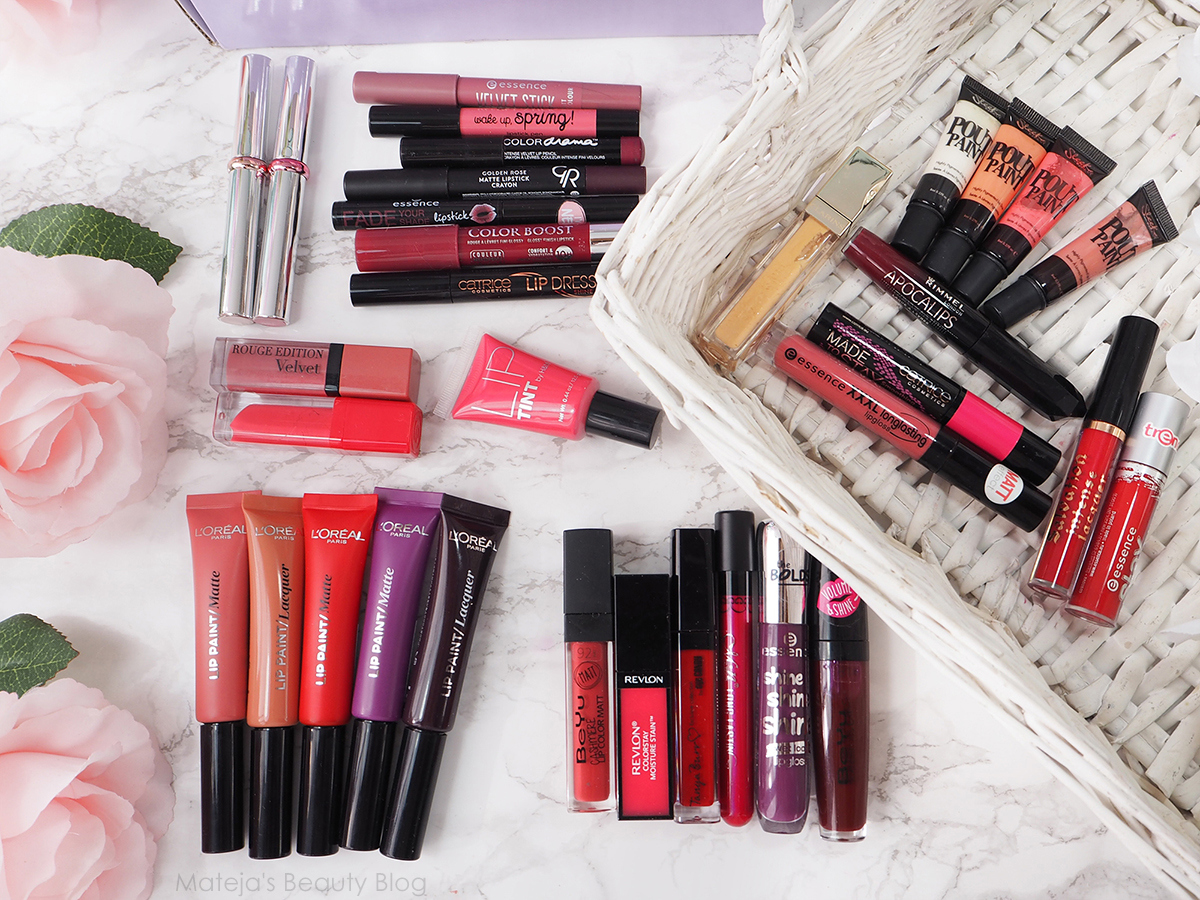 Not done with the lips quite yet. Again it’s a collection of shades I either have similar shades of (I had so many burgundies), or they aren’t my colours (I really don’t like purples and browns) or they are glosses which I never wear. Don’t be shocked by the L’Oreal Lip Paints – these aren’t my shades and I kept my favourite 102 Darling Pink.
EYES BOX 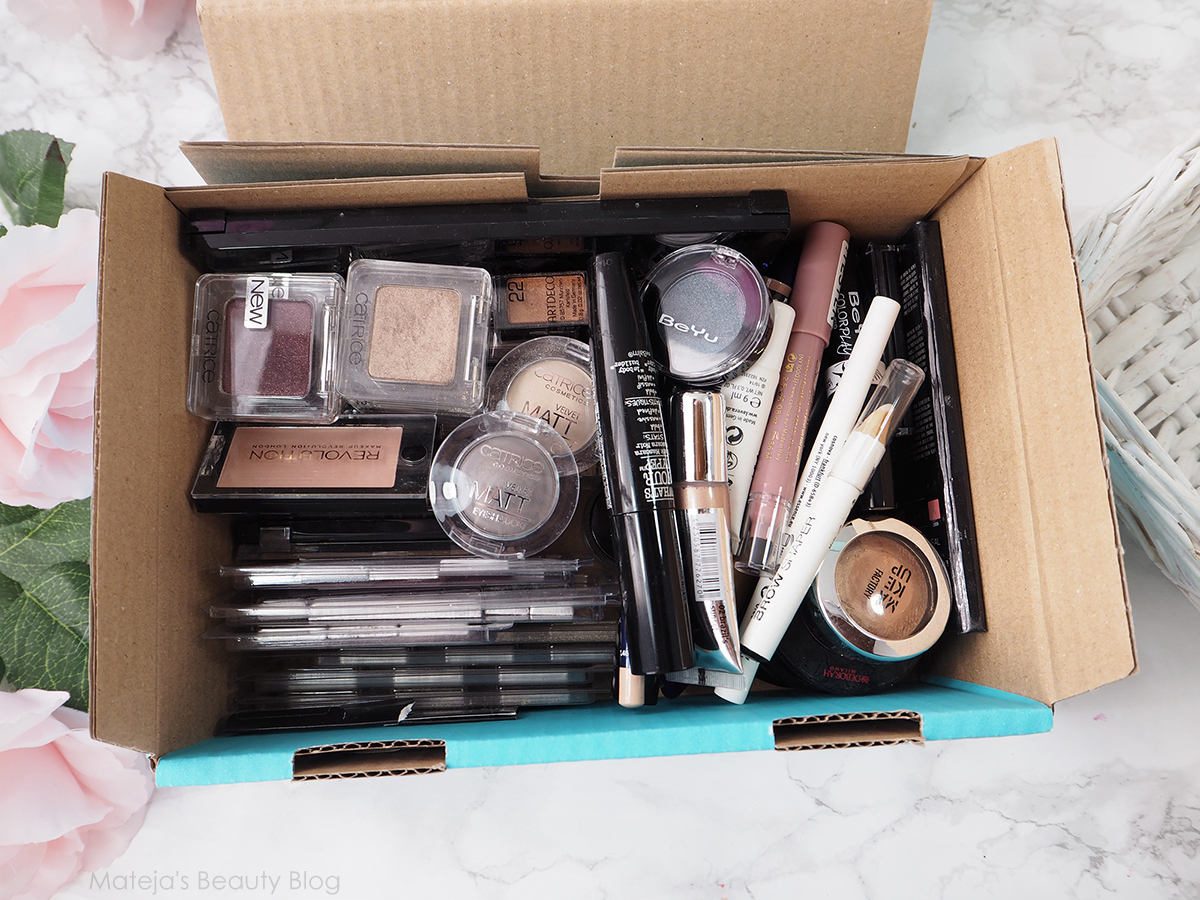 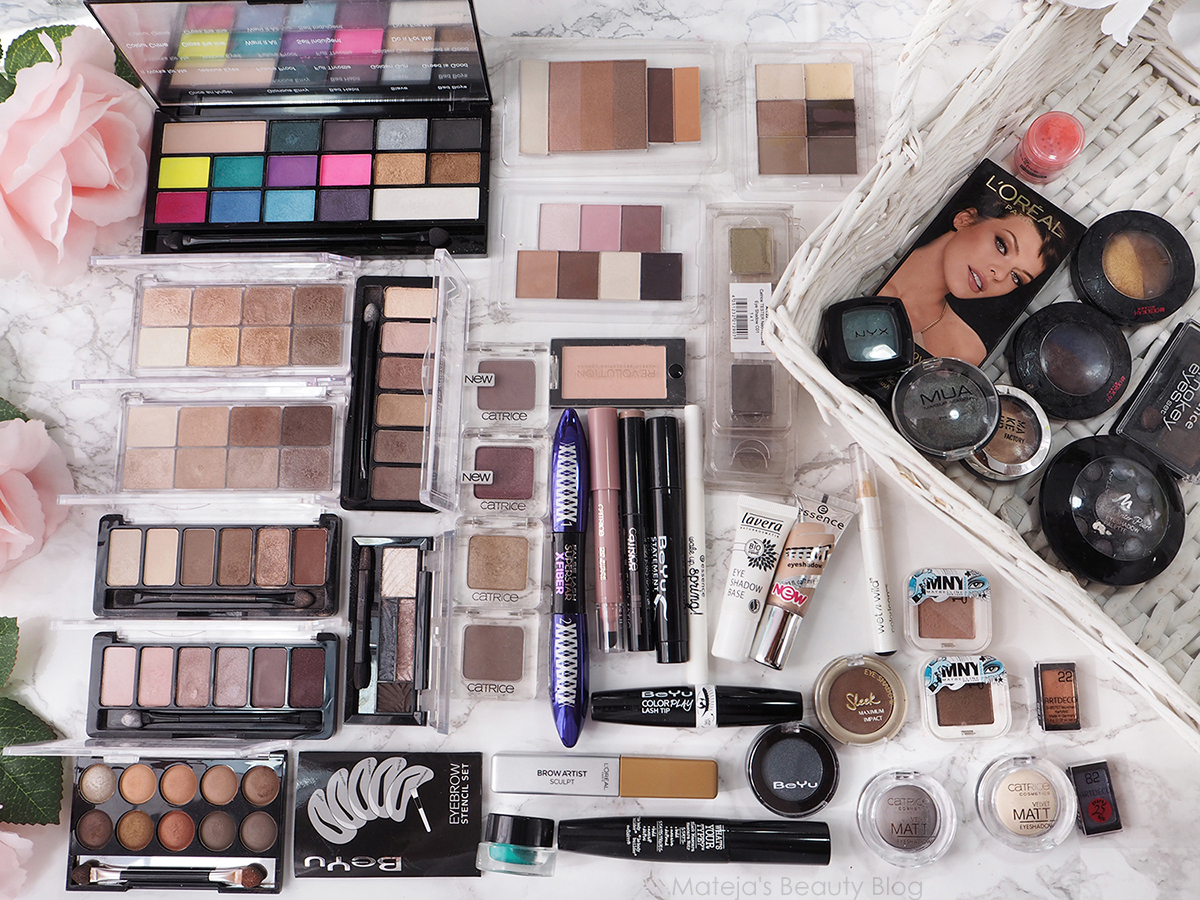 Since I got theBalm and Too Faced palettes I scarcely pick anything else, so I reduced my collection considerably. I decided to give away Catrice palette despite the fact I love them (I kept my fave Matte one, even though I have UD’s Naked Basics), but they were just sitting there unused since I got my high-end palettes. The rest is mostly gifted products or mega old (I told my friends to just throw those away if they look weird to them).
NAILS BOX 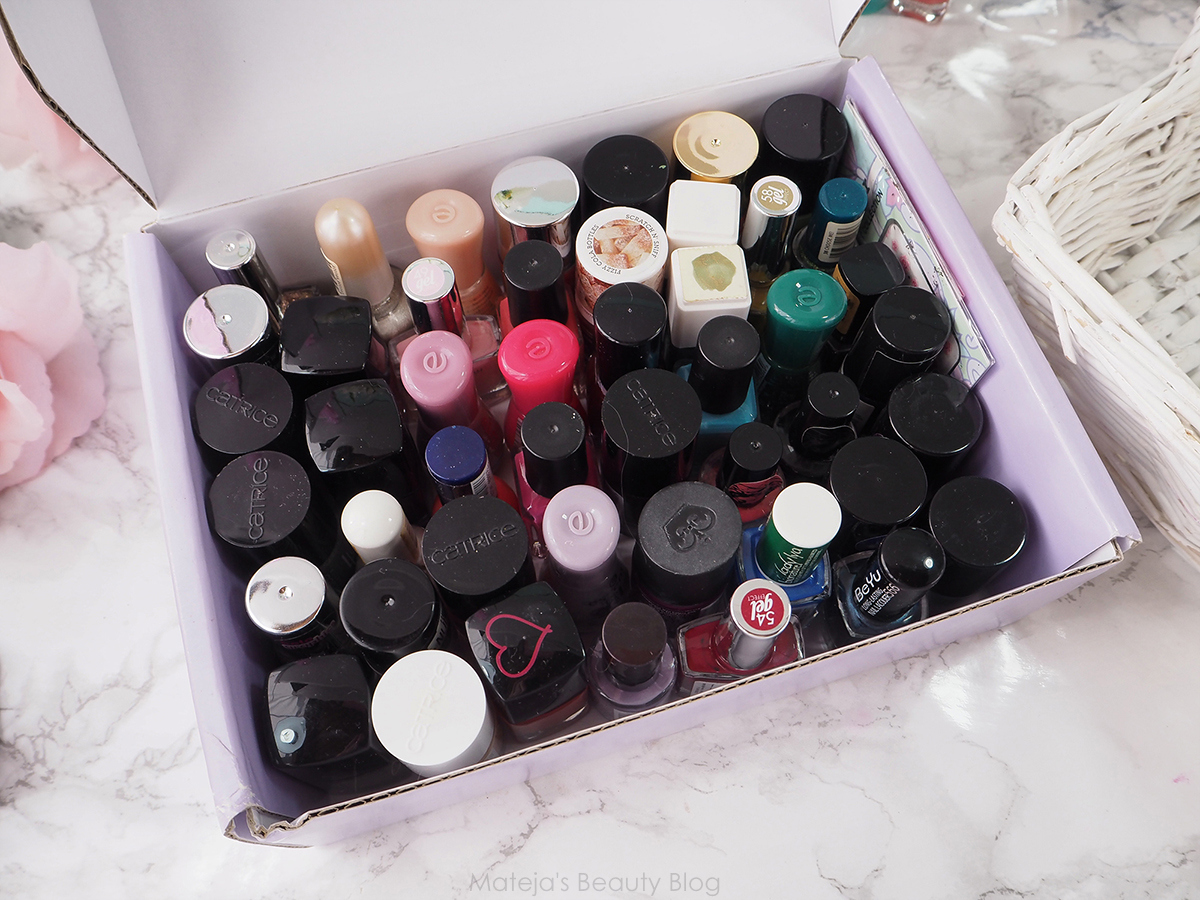 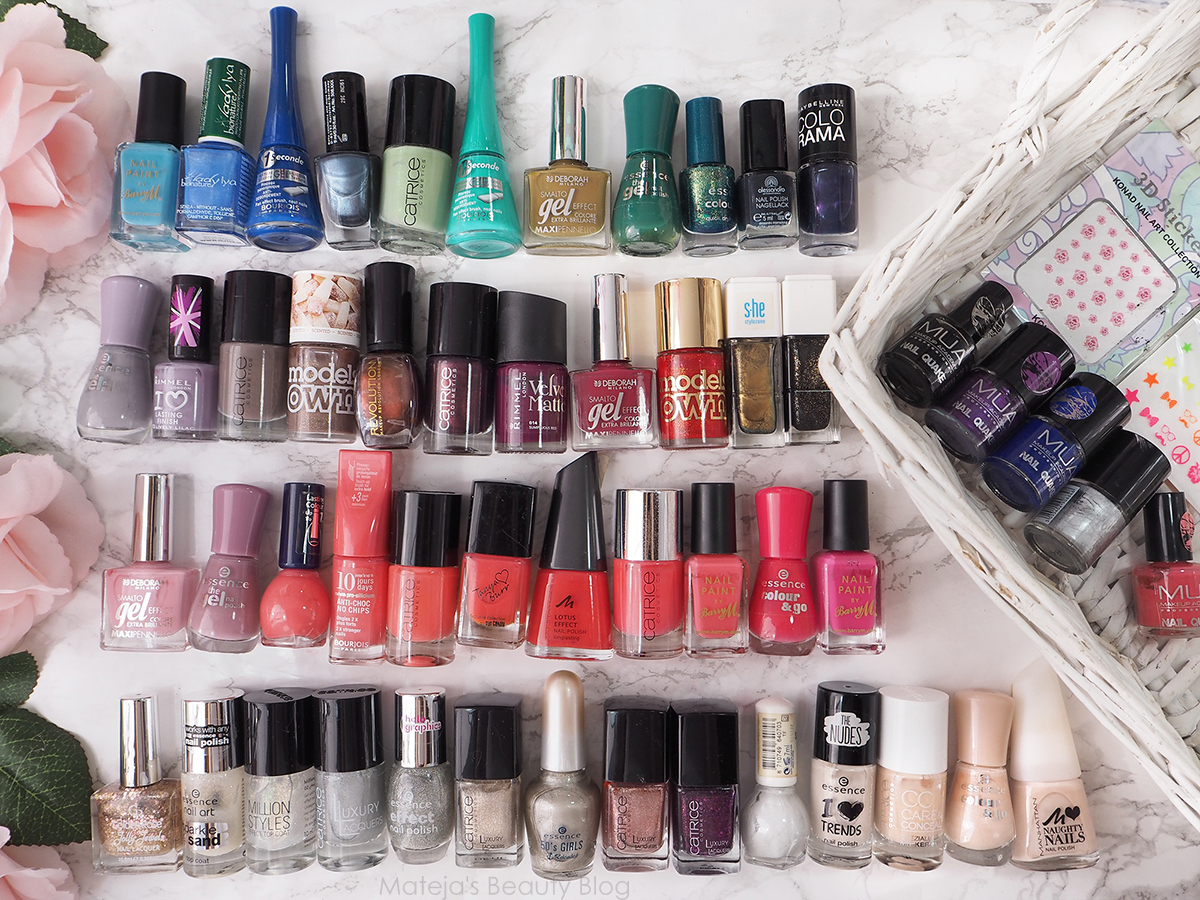 I also decreased my nail polish stash by a half, mostly because I have similar shades and some shades didn’t turn out the way I wanted. I’m also not a fan of effects shades. Actually I tend to wear the same shades – nudes, reds, vampies and mint greens, so I felt bad for all the nail polishes that haven’t been worn in a long time. 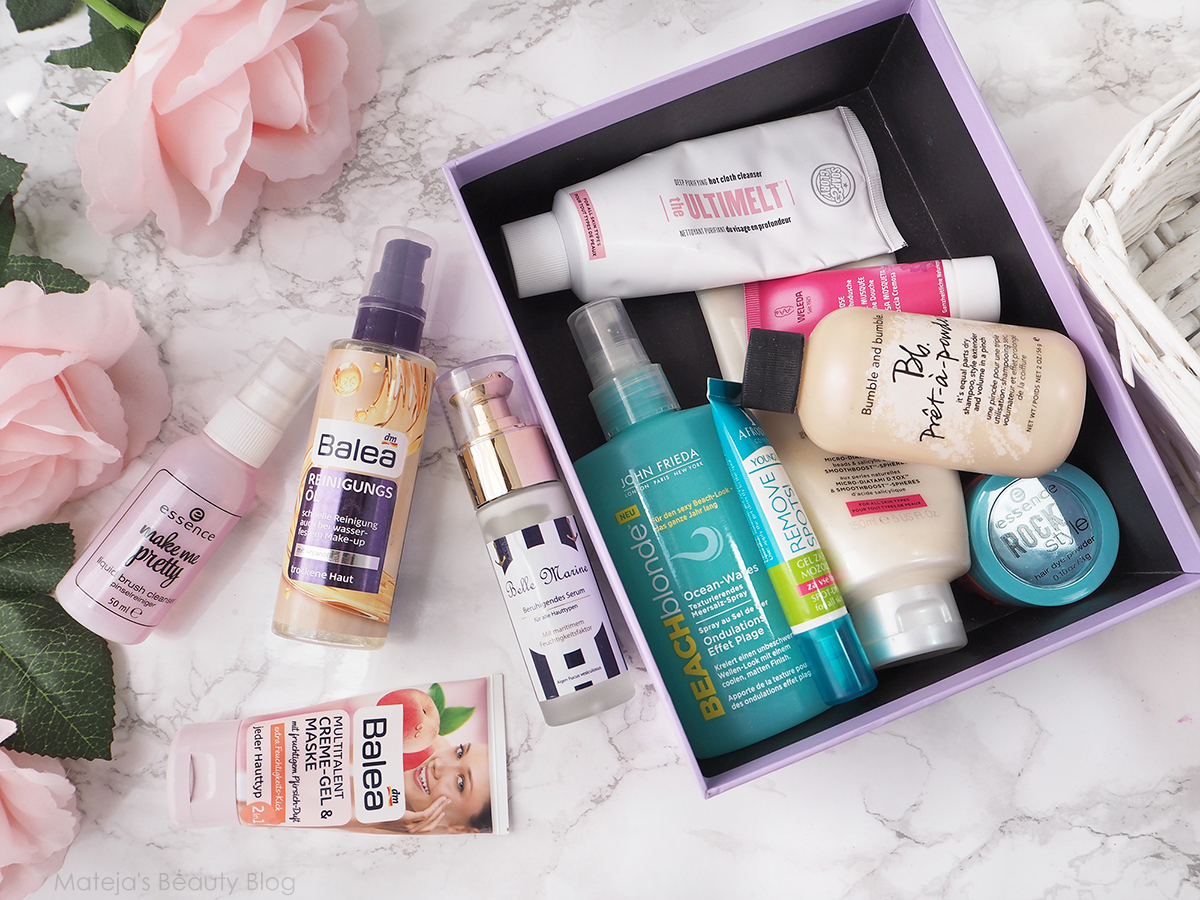 This box has only a few bits because I have a separate box in the bathroom for anyone to pick up and use (mostly stuff from my disappointing products post). I marked everything with a big post tip note describing their basic function and use, so even the least cosmetic savvy person understands what it is – it just had to be done because too many times people used a bubble bath as a shampoo. So in this box I gave away are skin care bits that didn’t fit my skin type or I found something better. I gave away my John Frieda Beach spray and Bumble’s Pret-a-Powder because they weren’t used and I knew someone else will like it. I also included some dry shampoos because I never use them, but they aren’t in the picture.
Have a great day!