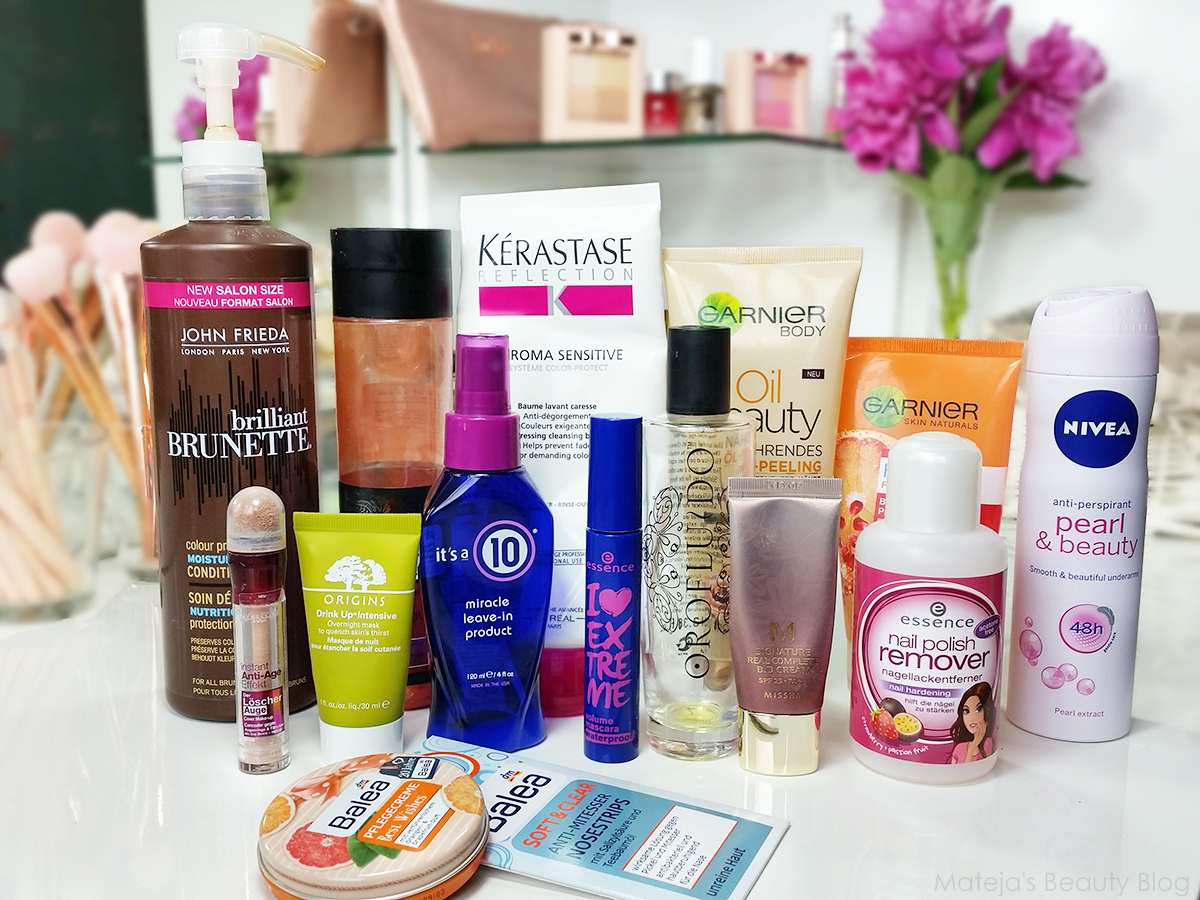 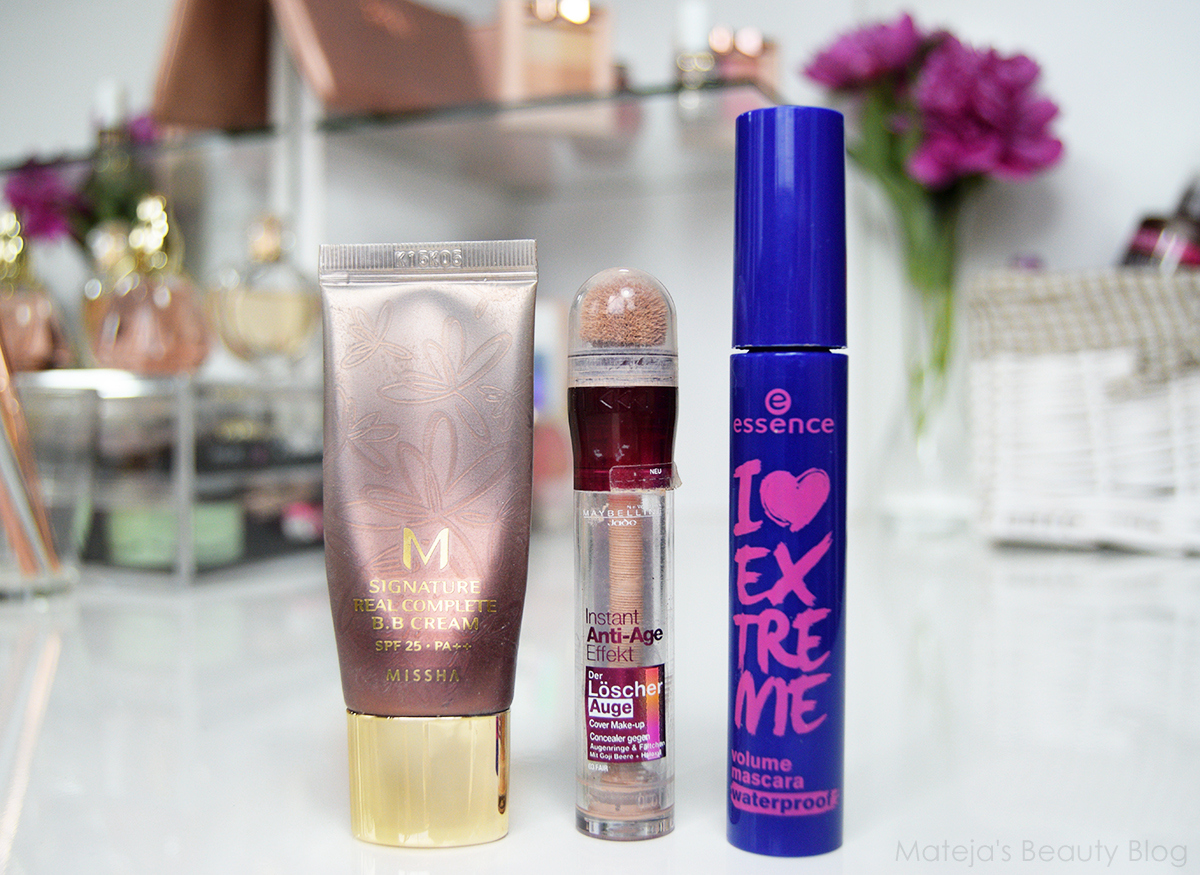 MISSHA M Signature Real Complete BB Cream
#13
This wasn’t my first proper Asian BB cream (that was Skin79), but it was the first shade ever that actually fit me. It’s still the best fit I found because it’s the closest to a neutral undertone I’ve found, though it has a grey tinge to it, like a lot of proper BB’s. It’s a light, but greasy formula with a light-medium coverage and I liked it mostly when my skin was drier than usual, as it’s quite a tacky BB that takes a really long time to set.
Repurchase: Yes, because of the shade, but it probably won’t happen soon.
MAYBELLINE Instant Anti-Age The Eraser
One of my favourite concealers. It needs very little blending, has medium coverage, a thin formula and a completely natural finish. Love this, but I love Bourjois Radiance Reveal just as much.
Repurchase: Already did.
ESSENCE I <3 Extremes Waterproof Mascara
I talk about this mascara a lot, so I’ll be brief – it’s my favourite budget mascara because it’s super volumising, lengthening, doesn’t smudge, flake, it’s cheap and it keeps the eyelashes curled all day. Love this stuff.
Repurchase: Already did. 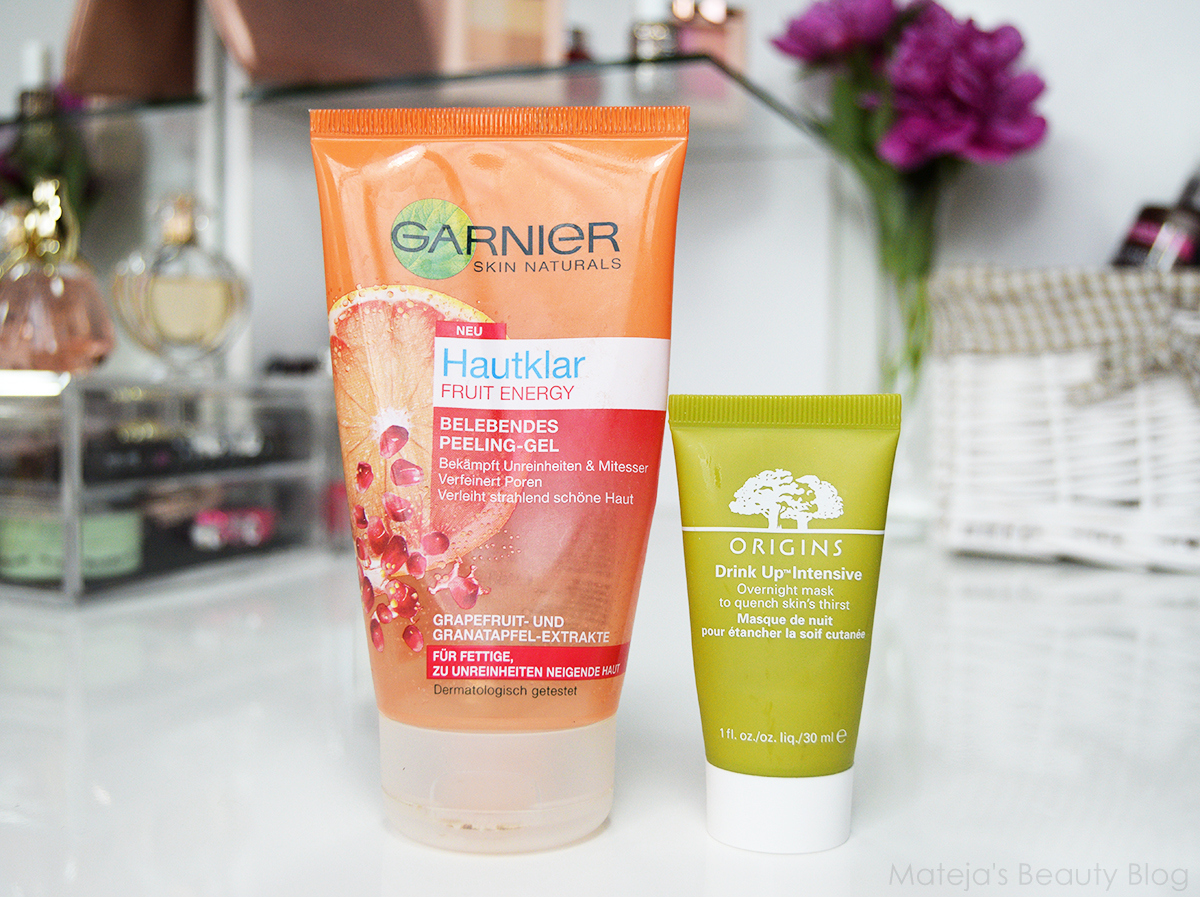 GARNIER Pure Active Fruit Energy Daily Energising Gel Scrub
a.k.a. Hautklar Fruit Energy Belebendes Peeling-Gel
I didn’t use this very often because these type of gel cleansers cause flakes on my skin if I use them every day, but I really liked this as a simple cleanser when I didn’t wear much makeup. It contains gentle scrub bits and the formula isn’t as thin like most gel cleansers, plus it smells refreshing. They stopped selling these here for some reason and I don’t know what I should buy as a replacement (maybe the new L’Occitane Peony gel).
Repurchase: I can’t find it in our drugstores anymore (it’s still sold on Boots), but I liked it, so yes.
ORIGINS Drink-Up Intensive Overnight Mask
I’ve had this for ages because I found a cheaper replacement fast after I tried this. A few years ago it was a very hyped-up mask and I think it just doesn’t deserve it. I mean it’s nice, but life-changing? Nope. It’s like a thick moisturiser that you apply in a thick coat when your skin is especially parched and while it does the job ok, my skin didn’t feel all that special and it failed at really, really dry skin. I remember really wanting this because everyone said it smells like peaches – well, it doesn’t. Not even close. It just smells like canned fruit salad, so nothing special. I much prefer the cheaper Balea Beauty Effect Power Maske.
Repurchase: No. 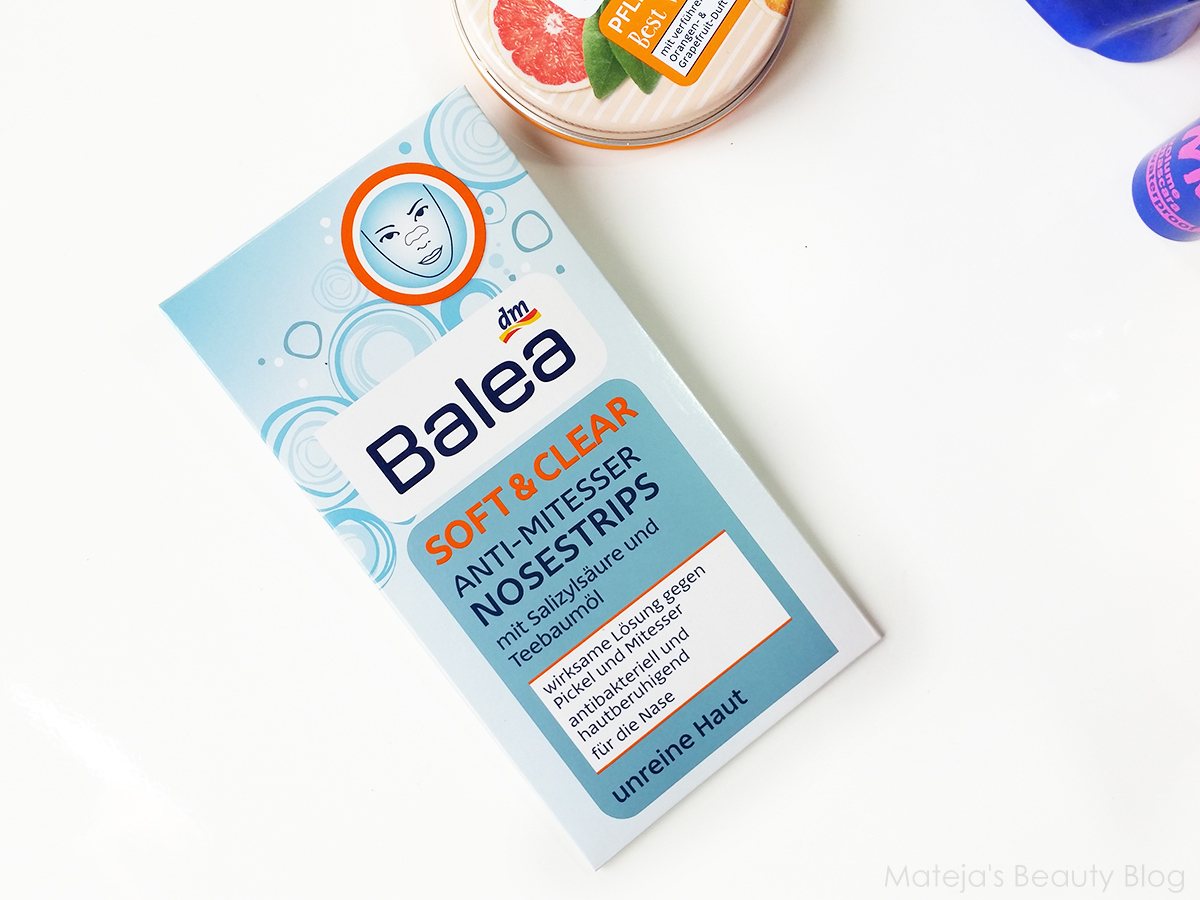 BALEA Soft & Clear Nose Strips
So far these are my favourite pore strips, however, they are still not that effective. They remove maybe about 50%-75% of the filth that is stuck in the pores, but I can’t say that I’ve seen a significant reduction in blackheads after use. They are very satisfying to use that’s why I buy such products, but my blackhead are still there.
Repurchase: Yes. 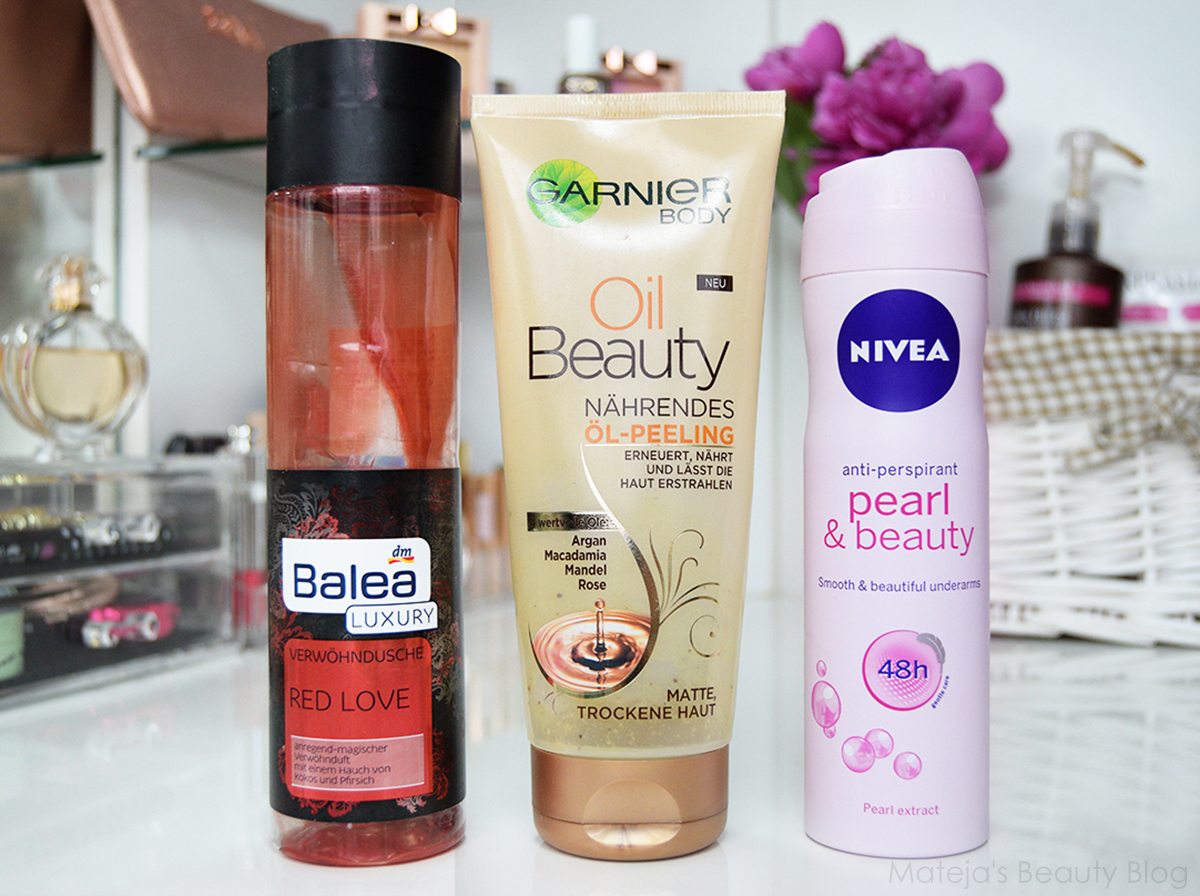 BALEA Luxury Werwöhndusche Red Love
I really like the scent of this because it’s peachy, but it’s not regular Balea-type of fresh peach, it’s deeper, more sultry. Balea says’ it’s mix of peach and coconut, however, I notice none of the latter. It’s a thick shower product, almost to the point where it’s hard to make it foam, meaning you need a bit more water than usual. That thickness actually makes an ok-ish base for shaving. The gel is deep red with shimmer, but other for effect, that shimmer doesn’t stick on the skin.
Repurchase: Yes.
GARNIER Oil Beauty Scrub
I really like this, not as a proper scrub, but just as a shower product. It’s has quite a unique gel-oil texture that transforms into luxurious creamy foam. The scrubby particles aren’t too harsh, so I used it as a regular shower gel. It also smells lovely, kind of sweet nutty-floral.
Repurchase: Yes.
NIVEA Anti-perspirant pearl & beauty
Another one of these used up. I don’t know which one is a row it is, but there have been many. I love the powdery floral feminine scent of this and it works well because it’s a bit powdery. Just one of those everyday heroes.
Repurchase: Yes. 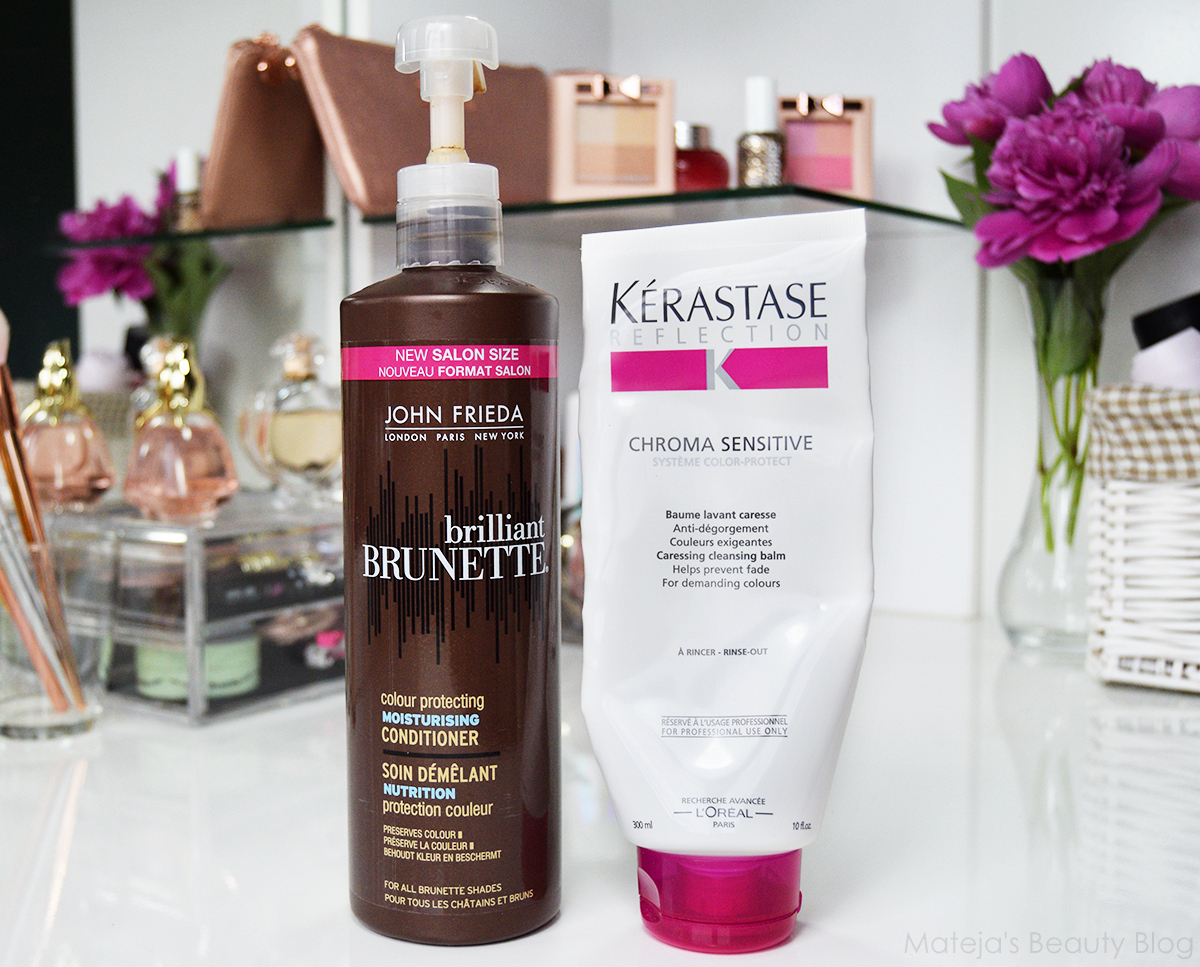 JOHN FRIEDA Brilliant Brunette Moisturising Conditioner
One of my favourite drugstore conditioners. I had the jumbo size with 500 ml and a handy pump, which lasted me quite a while, but I don’t think you can get this format Müller (mine is from Feel Unique). It’s quite light for what I normally like when it comes to conditioners, but it is moisturising enough for me and it gives my hair some shine. It also has a lovely coconuty-caramel scent that lingers on my hair.
. Repurchase: I’ve seen new packaging, but I don’t know if they changed the formula too. I will repurchase despite that.
KÉRASTASE Chroma Sensitive Caressing Cleansing Balm
My first cleansing conditioner that I got as a gift with purchase. I used this when I was too lazy to properly wash my hair, as it’s a one-step hair routine, so you just use this as a shampoo and be done with it. However, it’s not a product you’d want to use too often, since it’s quite heavy even on my thick, dry hair. It made my hair really silky and nourished, basically very similar to using Masquitense also by Kérastase. This is actually designed for coloured hair and it should prevent colour from fading since there is not soap it it, but I would recommend this only to people with very dry hair, as it’s not the lightest hair product.
Repurchase: Yes. 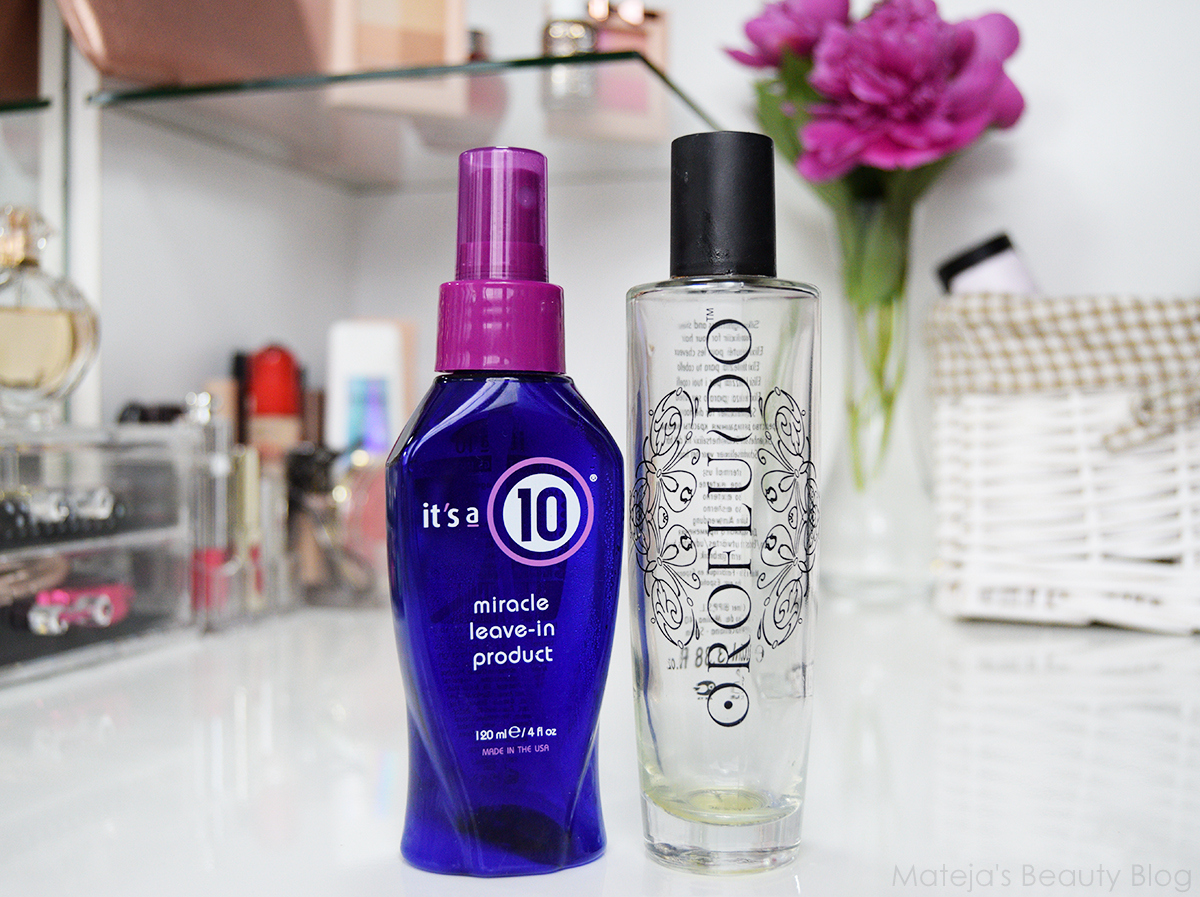 IT’S A 10 Miracle Leave-in Product
I remember really wanting this after reading a ton of very positive reviews and I got it for my birthday, since I had to order if off eBay, so understandably the shipping costs where very high. Everyone seems to love this, but it left me very underwhelmed. It promises everything from basic care, heat protection to frizz control, but apart from being a light heat protectant, it failed to deliver. There are so many better products on the market, so I regret spending my money for this.
Repurchase: No.
OROFLUIDO Beauty Elixir
My favourite hair oil and one I’ve been using for at least six years. It’s thicker than most and that suits my dry, thick hair. It has this gorgeous oriental scent, but it unfortunately doesn’t last long on my hair. I just wish they finally came up with a packaging with a pump.
Repurchase: Already have. 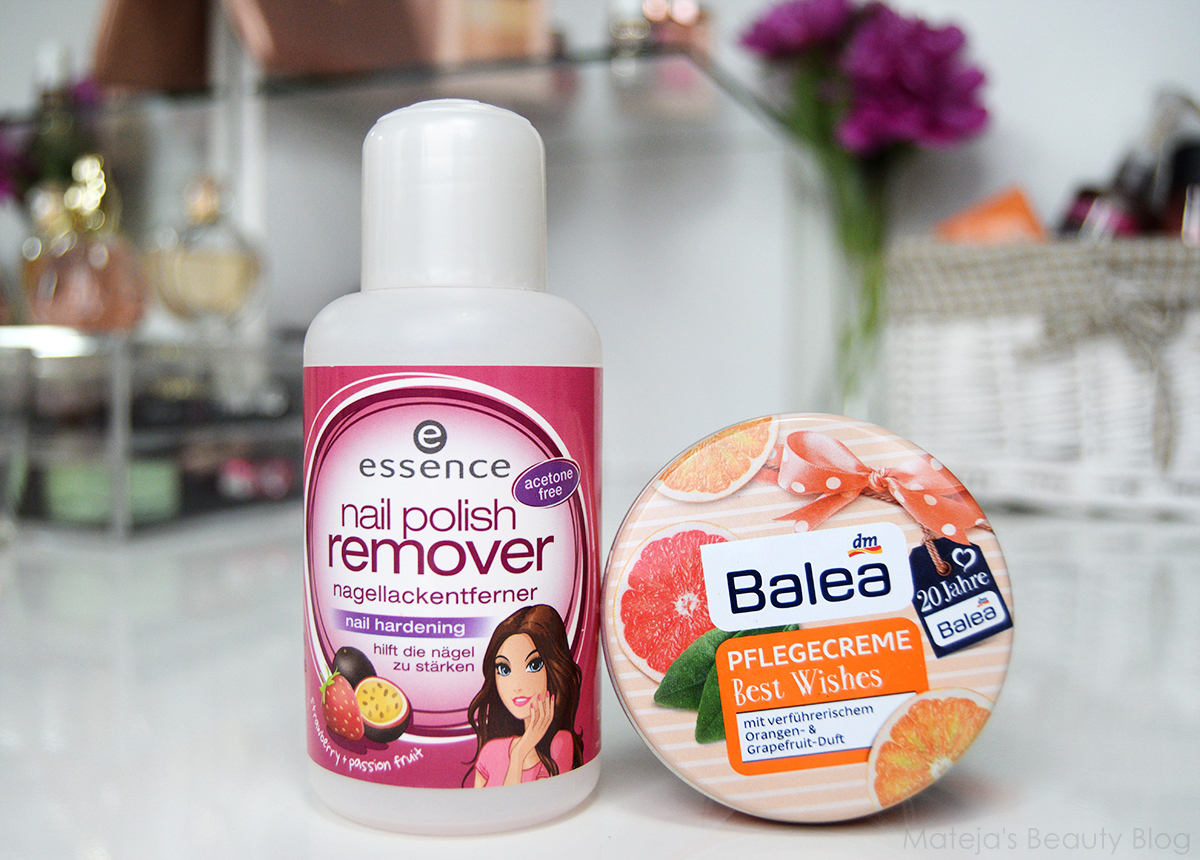 ESSENCE Nail Polish Remover
I mostly use those removers that come in a pot, so this has been in my stash for years. It’s very basic, but it removed the nail polish well. It smelled fruity, though nothing exciting.
Repurchase: If it’s cheapest when I’m buying a new remover.
BALEA Pflegecreme Best Wishes
Orange & Grapefruit scent
Just one of the many of these little tins I have and had. This one was a special edition released at the 20. anniversary of Balea brand. It smelled like oranges, quite authentically, but also a bit strange, so it wasn’t my favourite. The texture is light for a universal cream, but very moisturising and it sinks in fast, so I use them as hand creams, however, these really need to be used quickly as they tend to go bad by turning glassy and thick.
Repurchase: Not this scent. 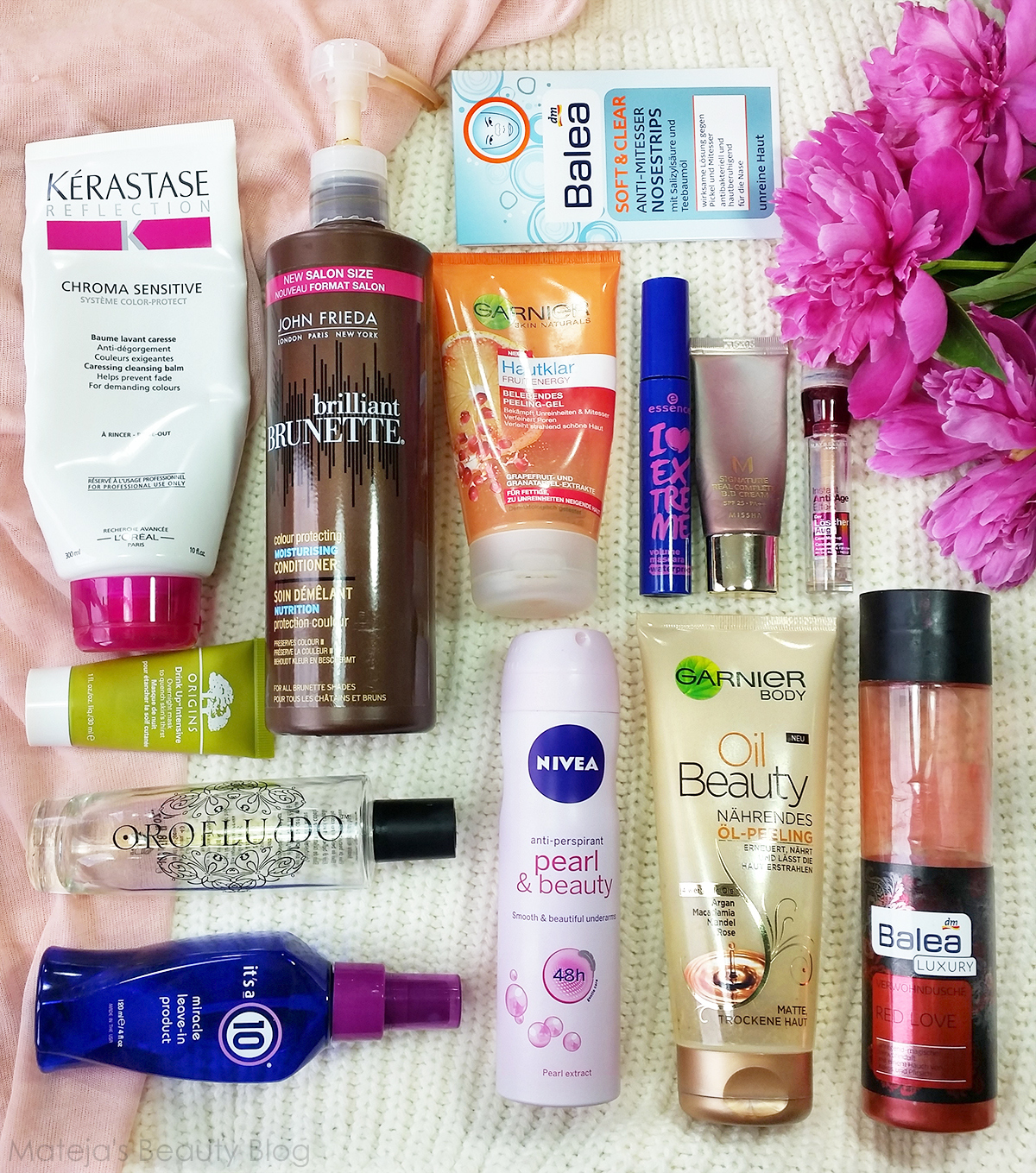