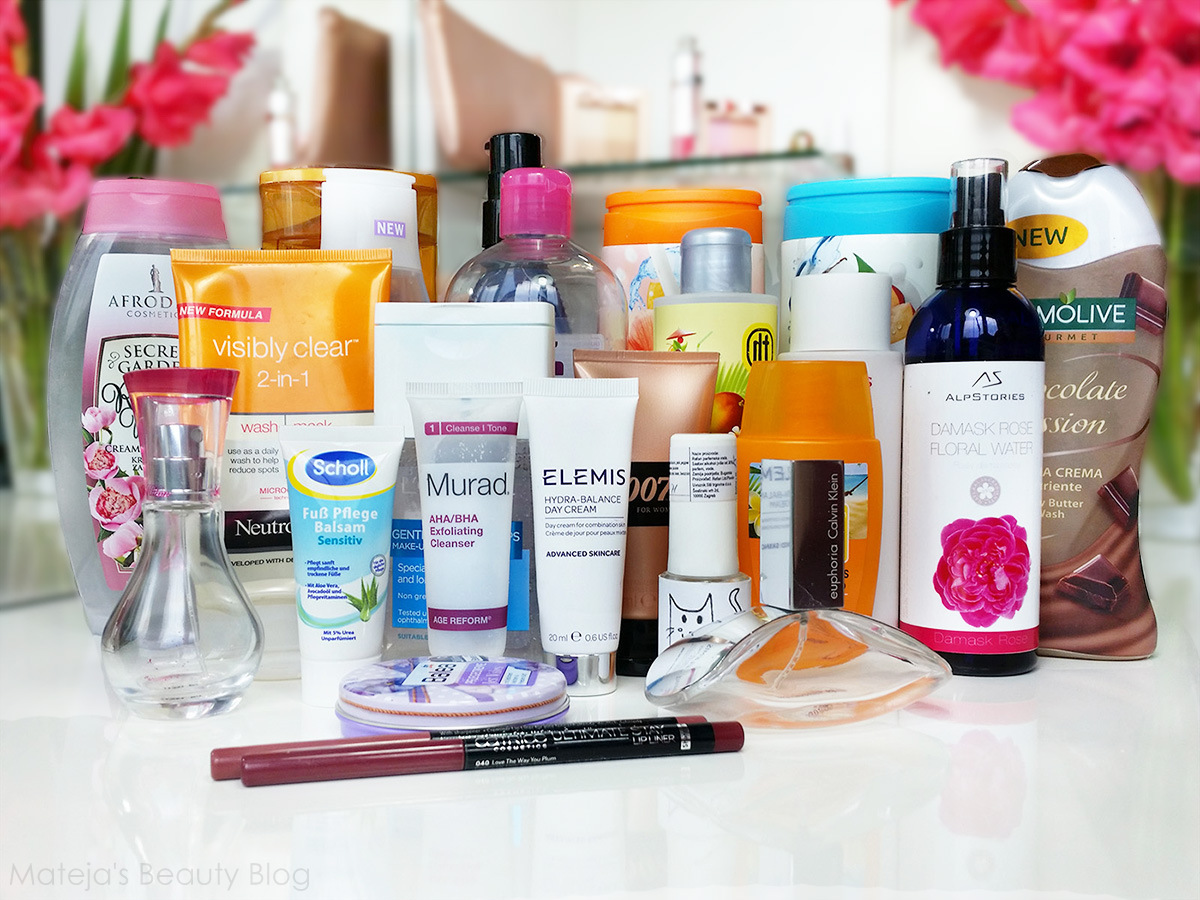 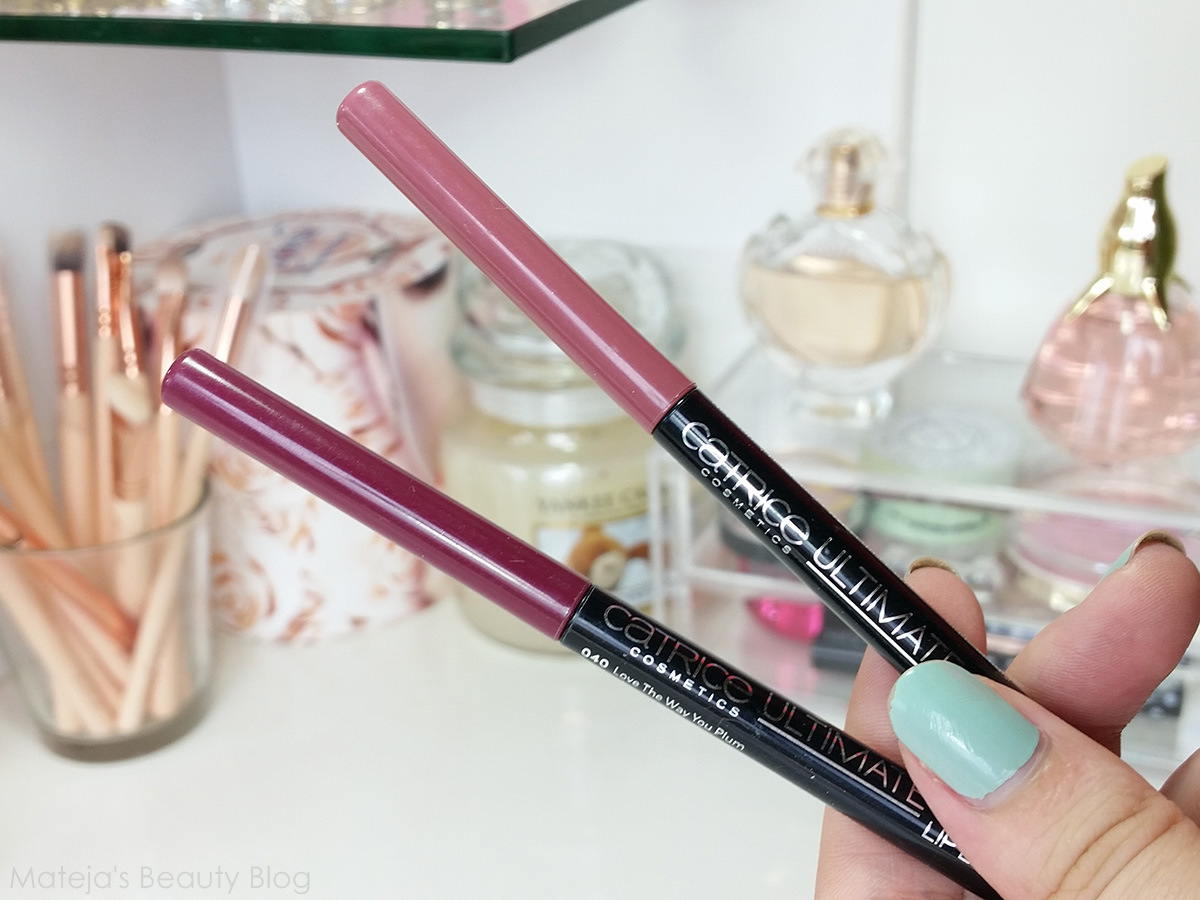 CATRICE Ultimate Stay Lip Liner
040 Love the Way you Plum and 080 Mauve Me, Tender
I wasn’t a fan of these from the start due to stickiness and extreme fragility, but they were still useful, however, a few months in they just dried up completely and I couldn’t do anything with them. These could be in the empties ages ago, but I forgot about them. Get Essence’s instead.
Repurchase: No.
HAIR 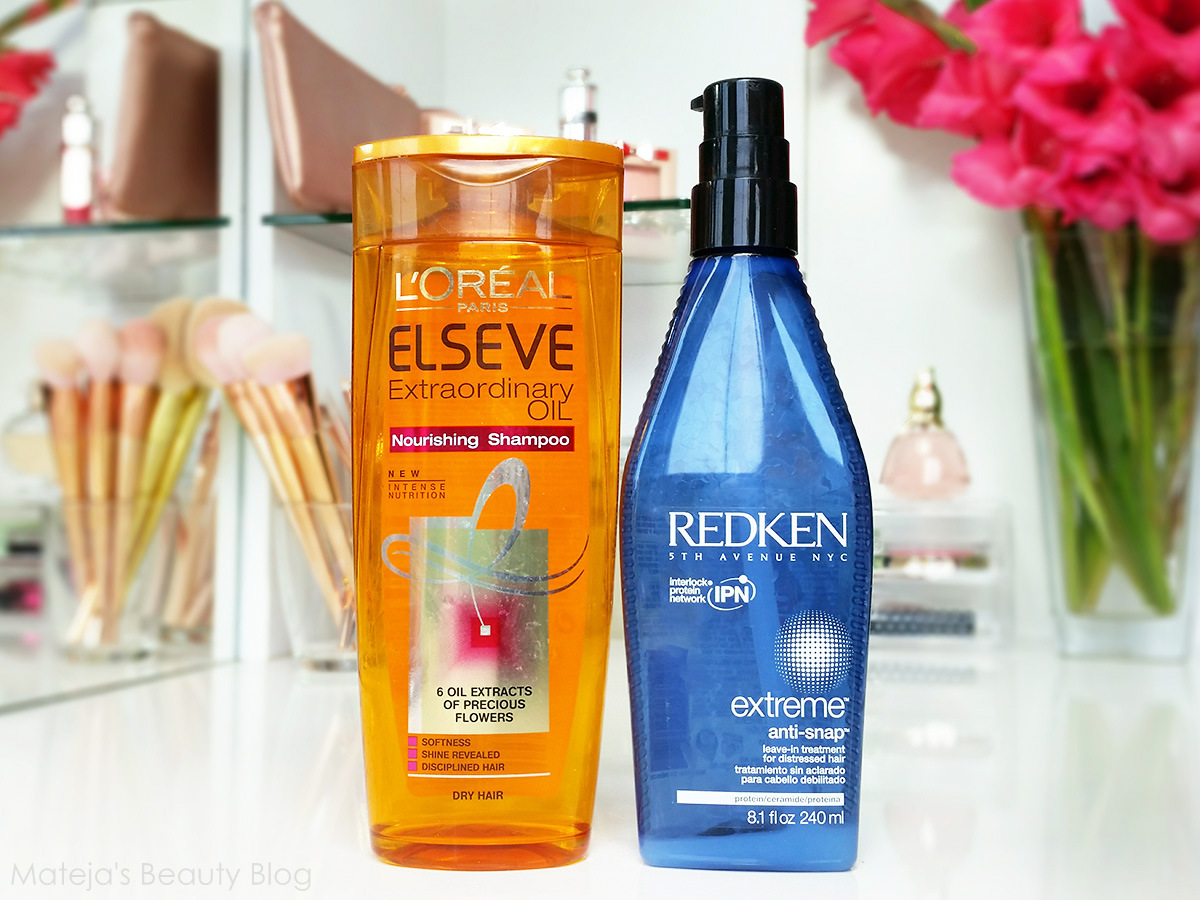 L’OREAL Elseve Extraordinary Oil Nourishing Shampoo
This is by far my favourite drugstore shampoo, in fact it’s my second favourite shampoo ever after Kerastase Oleo-Relax, which is actually not that different. It’s definitely something for very dry hair and I’ve had a few people say that it doesn’t suit them (and got their bottle to use up), but for me it’s perfect. It cleans well, but it also leaves my hair nourished and silky almost like I’ve already used a conditioner. I just adore this.
Repurchase: Yes, I always have a spare.
REDKEN Extreme Anti-Snap
This is just one of those staples in my hair care routine, though I use it only when I feel I need it. It’s a protein leave-in treatment that helps prevent breakage and split ends, so when I start seeing too much damage, I start using this (and preferably get a trim before), but it’s the type of product you shouldn’t use for too long. I recently had a hair cut and my hair dresser praised the health of my hair, but it was almost down to my waist when it was straight. If have a feeling your hair isn’t growing, it’s most likely because it breaks at the ends a lot and this treatment helps prevent that. It helps the hair stay in better condition for longer, I basically go to the hair dressers once a year (also because I dislike going and it’s too expensive) and I never have a feeling my ends are so damaged I’d need an instant trim. Anti-Snap is a light lotion with a sweet kind of fruity scent and it also helps a bit at taming the hair, but it’s mostly all about the protein.
Repurchase: Yes. But since it’s not that good to use protein treatments for too long or you might risk making more damage, I’ll buy it in a year or so. 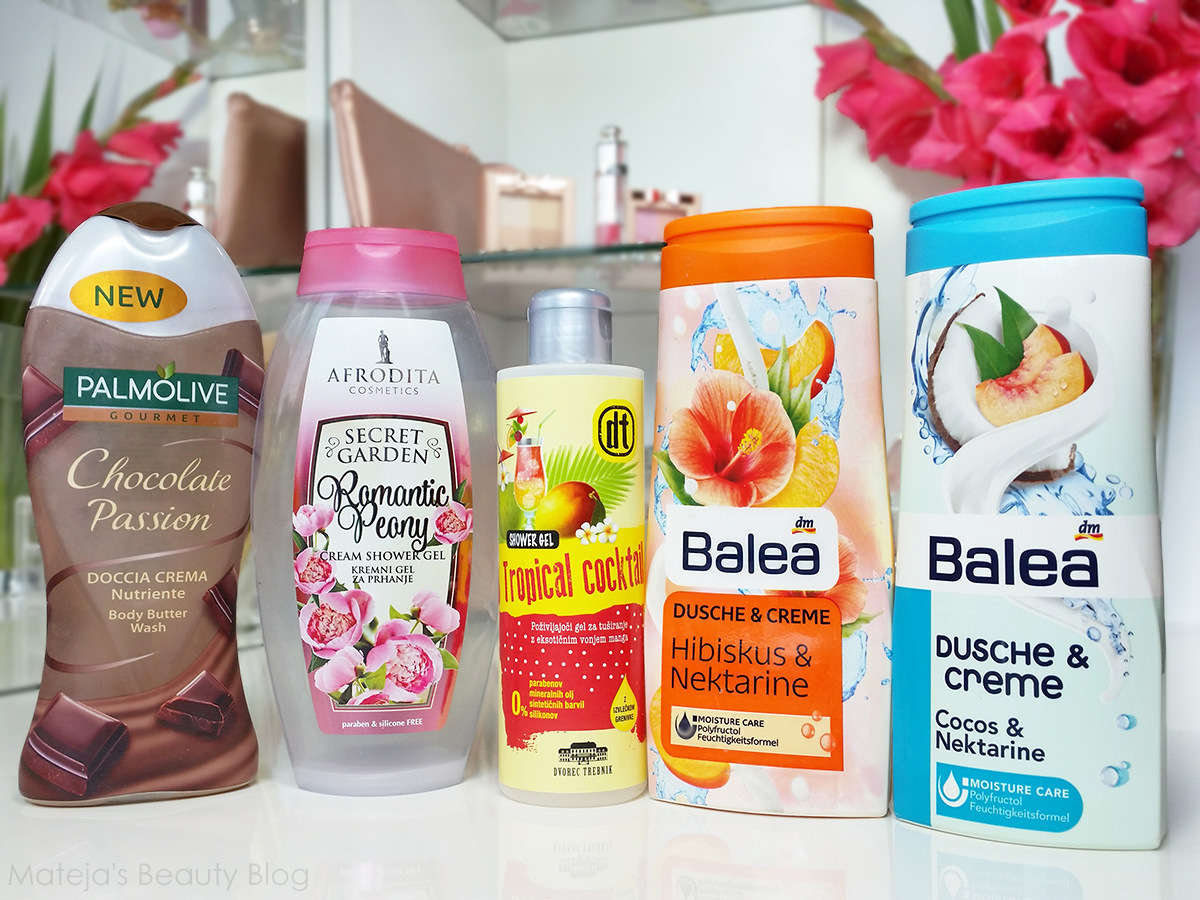 PALMOLIVE Chocolate Passion Body Butter Wash
Just a creamy shower gel with a decent enough chocolate scent. It’s not authentic, though close. I enjoyed it, but it’s nothing special that would make me run to repurchase it.
Repurchase: Maybe.
AFRODITA Secret Garden Shower Gel
Romantic Peony
This ran out in record time and despite the fact I had five shower gels in my bathroom, this was empty in less than a month. It was nice, but average. It’s creamy and it foams well, it also smells nice like flowers and pears (not like real peonies though), but it leaves my skin dry like most regular shower gels.
Repurchase: Maybe, but there are so many new ones to try all the time.
DVOREC TREBNIK Tropical Cocktail Shower Gel
I enjoyed the scent of it, but the texture it was a bit too runny for my taste, so had to use a lot for it to feel like something and for it to foam, which means the bottle didn’t last many showers.
Repurchase: No.
BALEA Dushe & Creme
Hibiskus & Nectarine and Kokos & Nectarine
I always have at least one Balea shower gel in my bathroom because they are cheap and they have some great scents. Kokos & Nectarine is my old discontinued absolute favourite, which smelled so gorgeous and its replacement was Hibiscus & Nectarine, which was a disappointment to me in terms of scent, as there wasn’t any nectarine in it, just a fresh fruity-floral scent.
Repurchase: Other scents. 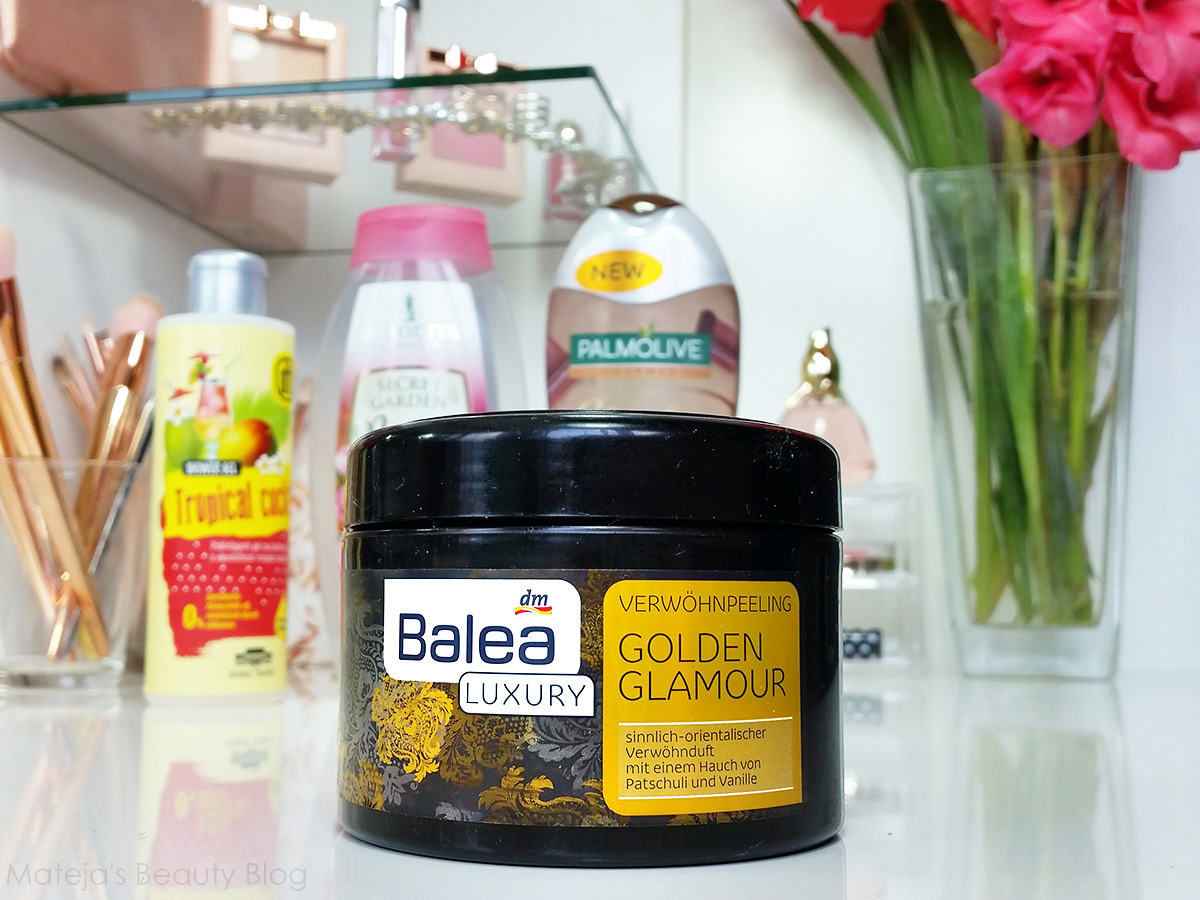 BALEA Golden Glamour Verwöhnpeeling
Well, this didn’t last long. I have a lot of scrubs at the moment, better ones in fact, so I didn’t feel like I was using this one that much, but it was gone is a few uses. It’s a strange one because it’s more like a hard jelly with sugar and it’s quite a slippery thing, so you also lose product because it falls from your hands. I like very harsh scrubs because otherwise they don’t do anything (against or on my ingrown hairs) and this one is fairly weak. The sugar particles are quite densely packed, but it’s not abrasive. It’s a stronger scrub than Garnier’s Ultimate Beauty Oil Beauty Scrub, but a lot weaker than my favourite Soap & Glory Flake Away Scrub. I think people with sensitive skin might find it harsh, but most others will love it, while I’d like it a bit harsher. It foams in contact with water and nourishes the skin a touch, though it doesn’t leave an oily filter like Soap & Glory’s Flake Away (or the super greasy Afrodita’s). The scent is a synthetic vanilla that’s in car fragrances and home sprays – it’s fine, but there are better. I like it, it’s not bad and I would repurchase if I needed something quick and inexpensive, but Soap & Glory’s and L’Occitane’s are much better.
Repurchase: Maybe. 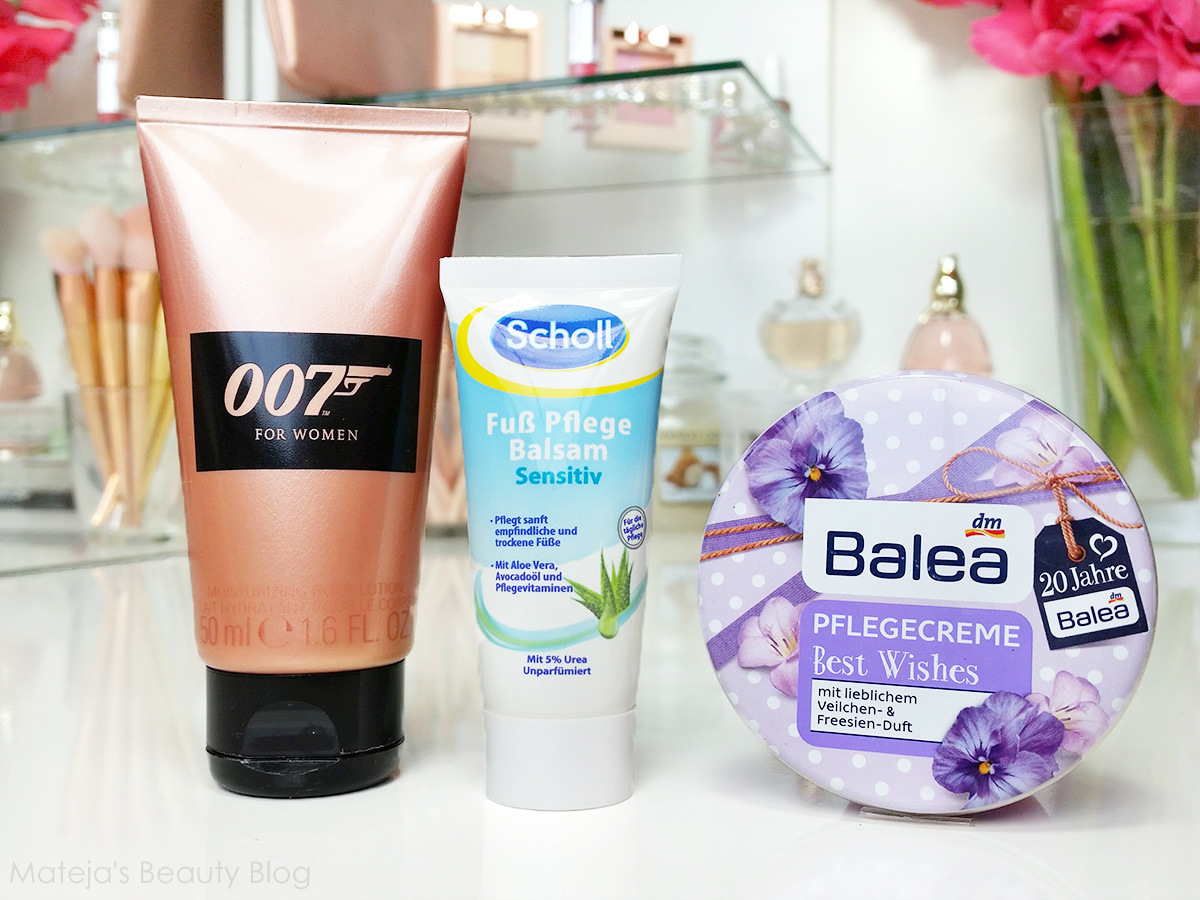 007 Moisturising body lotion
The fragrance of this comes in this gorgeous bottle, but I only had the lotion, which is strongly scented and can easily be used instead. It’s what I consider a sexy scent – fruity, sweet, but deeper, peppery, vanillary, so it’s more of a night time fragrance. The only similar scent I know of is Cacharel Amor Amor which is a similar mix of berries and vanilla. The body lotion is light, but I can’t say it sinks in in minutes.
Repurchase: Maybe the fragrance.
SCHOLL Fuß Pflege Balsam Sensitive
I bought just a small tube of this after hearing good things about it, but my soles are very dry and this was just too light for me. Despite being light, I didn’t feel it sinks in particularity fast.
Repurchase: No.
BALEA Pflegecreme Best Wishes
I love these little creams in tins and this one was one of my favourite because it smelled a bit like La Vie est Belle fragrance. Too bad they don’t sell this scent anymore. I use these as hand creams, but you need to use it up in about a half a year or it thickens and gets glassy.
Repurchase: this version is discontinued.
I have several more empties, but to make reading easier I split the post into two parts, so expect another in a few days.
Have a great day!