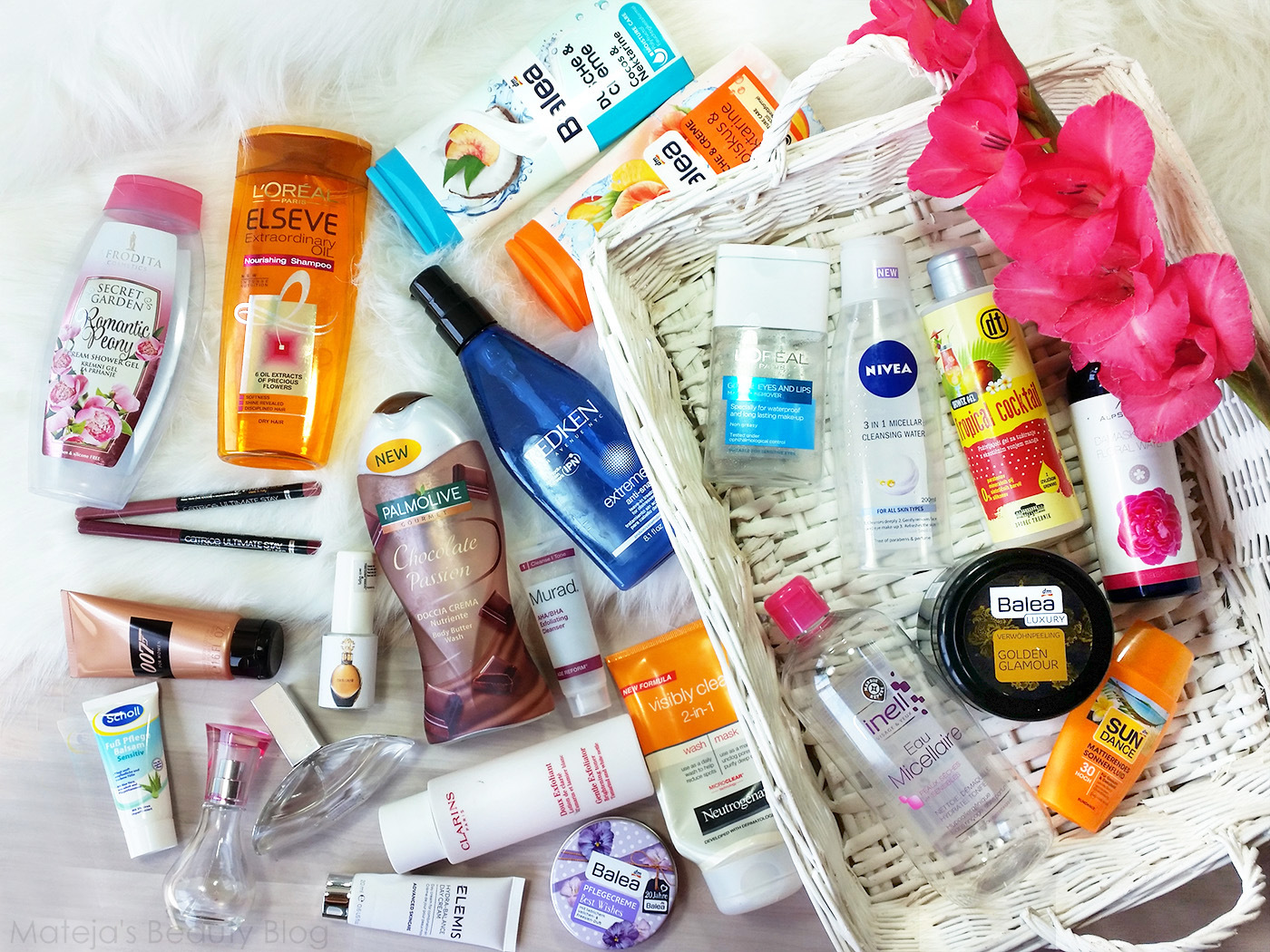 This is actually the second part of the empties, since as you can see on the first picture I had quite a few of them, so I decided to split the post into two. You can find the first part of empties here.
SKIN CARE 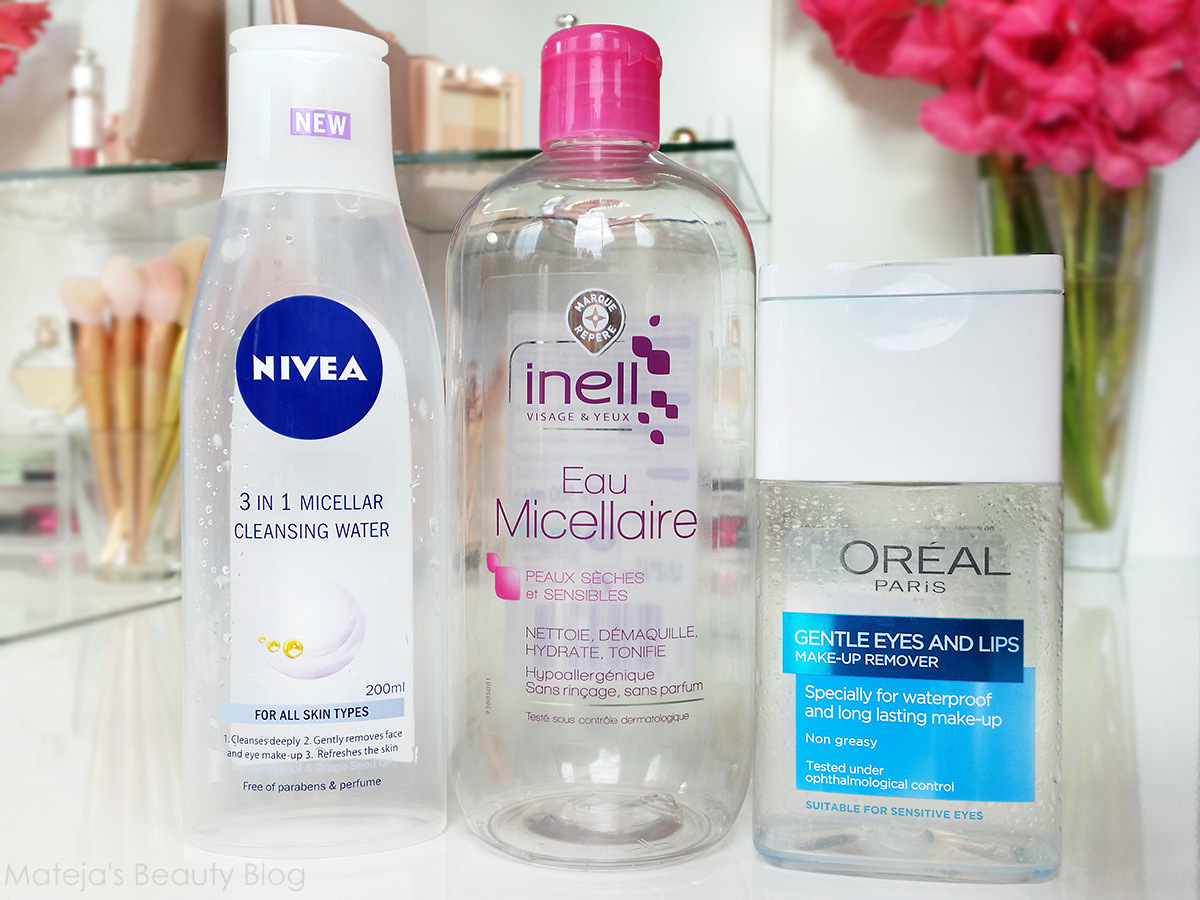 NIVEA  3 in 1 Micellar Cleansing Water
I don’t know why I didn’t give away this one ages ago because we just never clicked. It’s my least favourite micellar water I’ve tried so far and I’ve used quite a few. It’s weak and it breaks me out, so I used it to remove swatches, however Inell’s was a lot more effective at that.
Repurchase: No.
INELL Eau Micellaire
Damn this one just lasted forever, I was so sick of it for the last year. It’s not a bad micellar, it’s actually pretty good for the price, however, it’s not amazing and I hate having average products in my stash that I always commit to use up, while my favourites lie in the back of the cupboard waiting for their turn. It was a standard micellar, so one that feels like water and removes makeup ok. Now I prefer the new Garnier Micellar with oil to all micellar waters including Bioderma.
Repurchase: No.
L’OREAL Gentle Eyes and Lips Make-up Remover
One the better duo-phase removers. I use these to remove waterproof mascara and this one does the job well, but it doesn’t work without rubbing. As far as removal goes, it’s similar to the Maybelline one, which is cheaper. I’d say the only difference worthy of mentioning is that L’Oreal’s version stays mixed longer.
Repurchase: Yes. 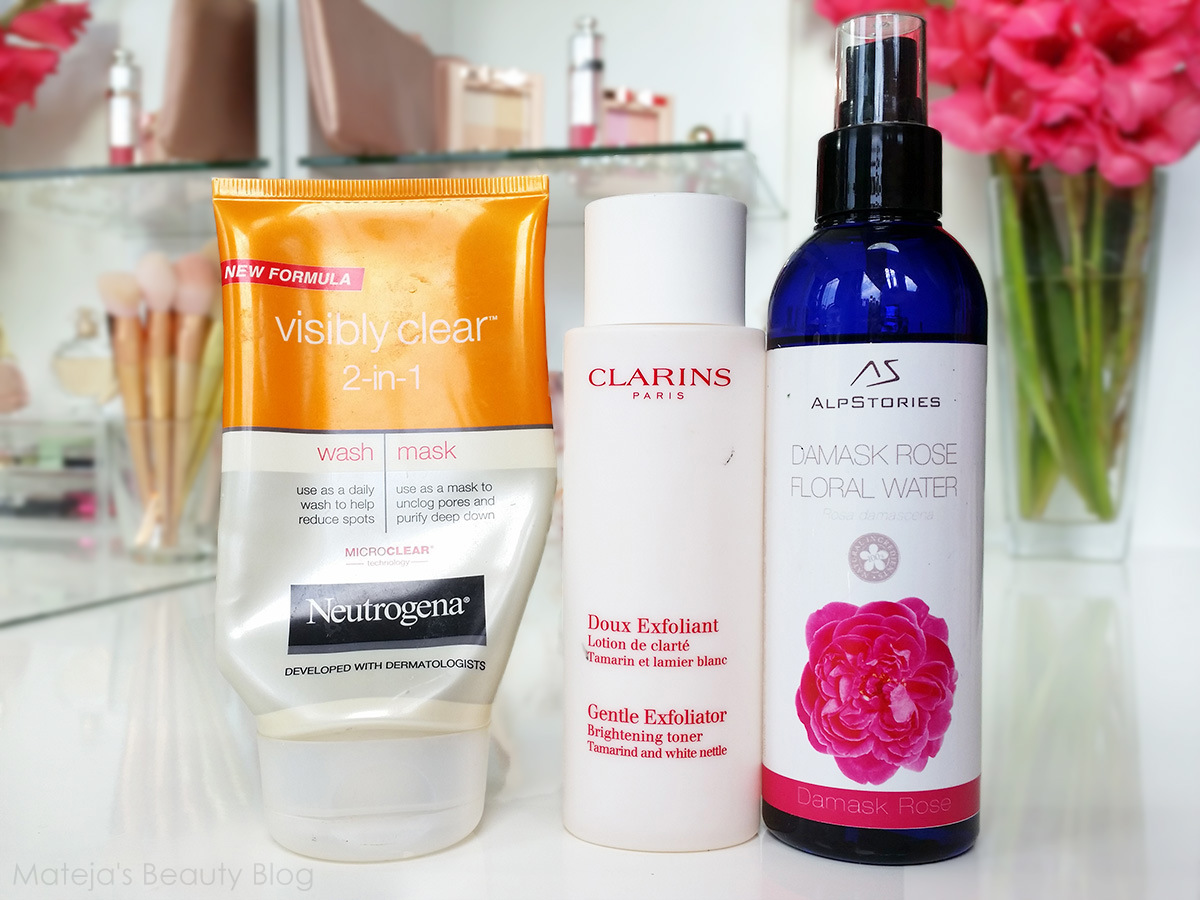 NEUTROGENA Visibly Clear 2-in1 Wash Mask
I had this tube for way too long. My skin’s been behaving in the past years and I didn’t use it that much, but this a part is my “omg I have a tiny zit -get it off!” emergency kit. I’ve been through a lot of tubes of this and have been loyal to it since my mid-teens. When I first started properly researching what I’m putting on my face, Neutrogena’s mask was all the rage and came heavily recommended by average consumers. I remember when I first used it, I was astonished at how healthy a 10-minute session made my skin look, now that effect is long gone. It’s just a simple clay mask with salicylic acid, but one that is not drying and comes in a huge tube for a pretty decent price. It can also be used as a cleanser and I used the last bit of the tube like that, but it’s a pretty rubbish makeup remover, so don’t use it like that and it feels a bit strange using it around the eyes.
Repurchase: Yes.
CLARINS Gentle Exfoliator Brightening Toner
This once landed in my forever repurchased and I loved it for a while, but I’ve almost completely strayed away from AHA products. It’s just that it’s the whole thing with acids making your skin more sensitive to sun damage and I’m not exactly known for keeping up with my sun protection regularly, plus I have freckles, so I feel safer if I don’t mess with AHA’s for the time being, even though now my skin texture isn’t as good any more. Otherwise this is a lovely toner, very gentle and a bit moisturising. It feels like a high-end pharmacy product and it gently exfoliates your skin. It definitely helped me fade some old marks from spots.
Repurchase: Maybe.
ALPSTORIES Damask Rose Floral Water
Should have thrown this away a long time ago. My skin isn’t sensitive at all, but this made it  burn slightly. I hated the scent and it did nothing, so it just lay in my cupboard forgotten until I decided to throw away the content and use the bottle for something else.
Repurchase: No. 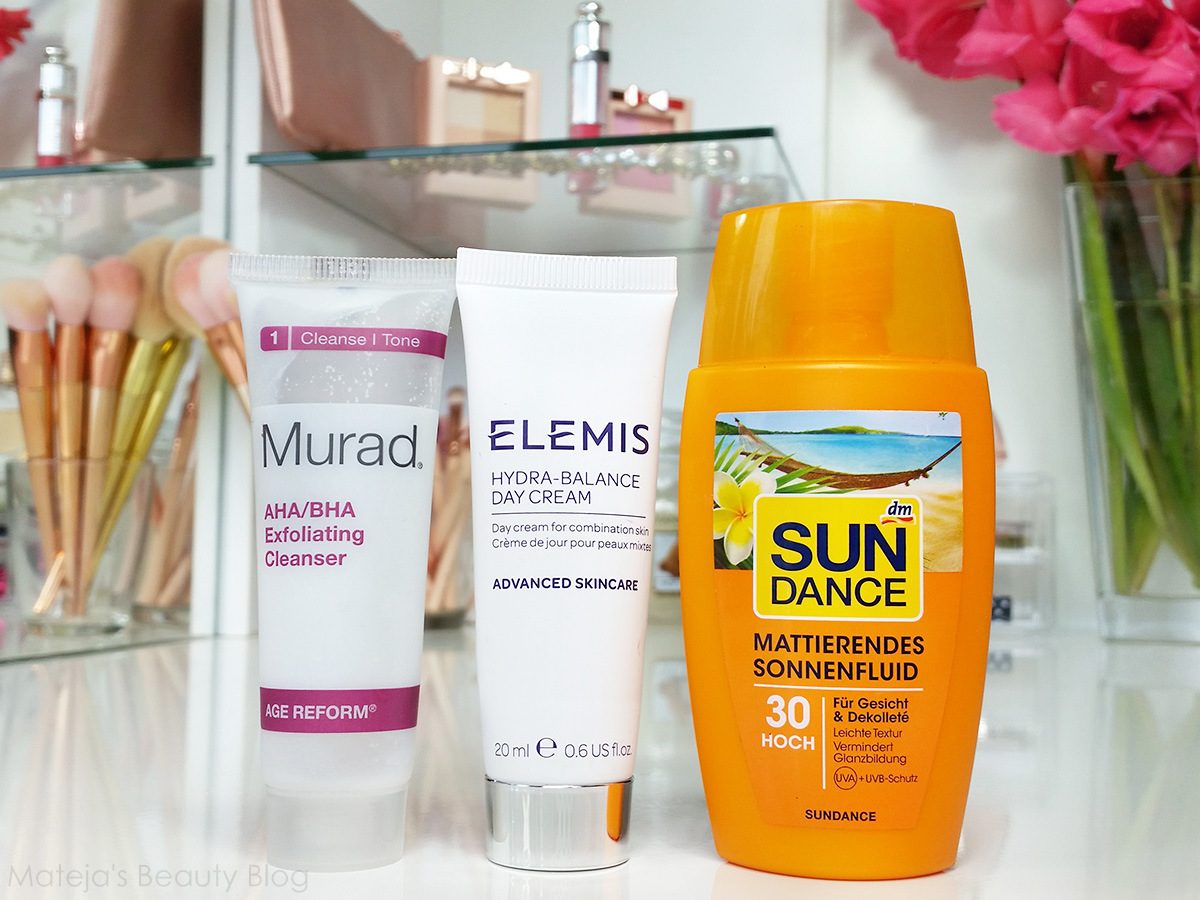 MURAD Age Reform AHA/BHA Exfoliating Cleanser
Strange for an AHA/BHA cleanser to have relatively harsh exfoliating beads. I used it up on day when I didn’t wear much makeup, but it wasn’t anything particularly special to warrant the high price tag and I didn’t notice any positive effects of the acids.
Repurchase: No.
ELEMIS Hydra-Balance Day Cream
A light, hydrating face cream for combination skin that I used as a base for makeup, but in it’s nothing special and for example Green Line’s HydraMineral does the same thing. It smells exactly like Emma Hardie’s Moringa Balm.
Repurchase: No.
SUN DANCE Mattifying Sun Fluid
This was my back-up choice of a face sunscreen for years mostly because it’s cheap and good enough (top choice was by far the tinted version of this), so I recently even bought a new one, but I feel like it’s different. It’s more shiny, has a stronger alcohol scent and it migrated into my eye about a half an hour after application causing a lot of irritation. It’s ok as long as I use powder and don’t apply it around the eyes, but the tinted version was a lot better.
Repurchase: Already did. However, I don’t know if I’ll still buy these.
FRAGRANCE 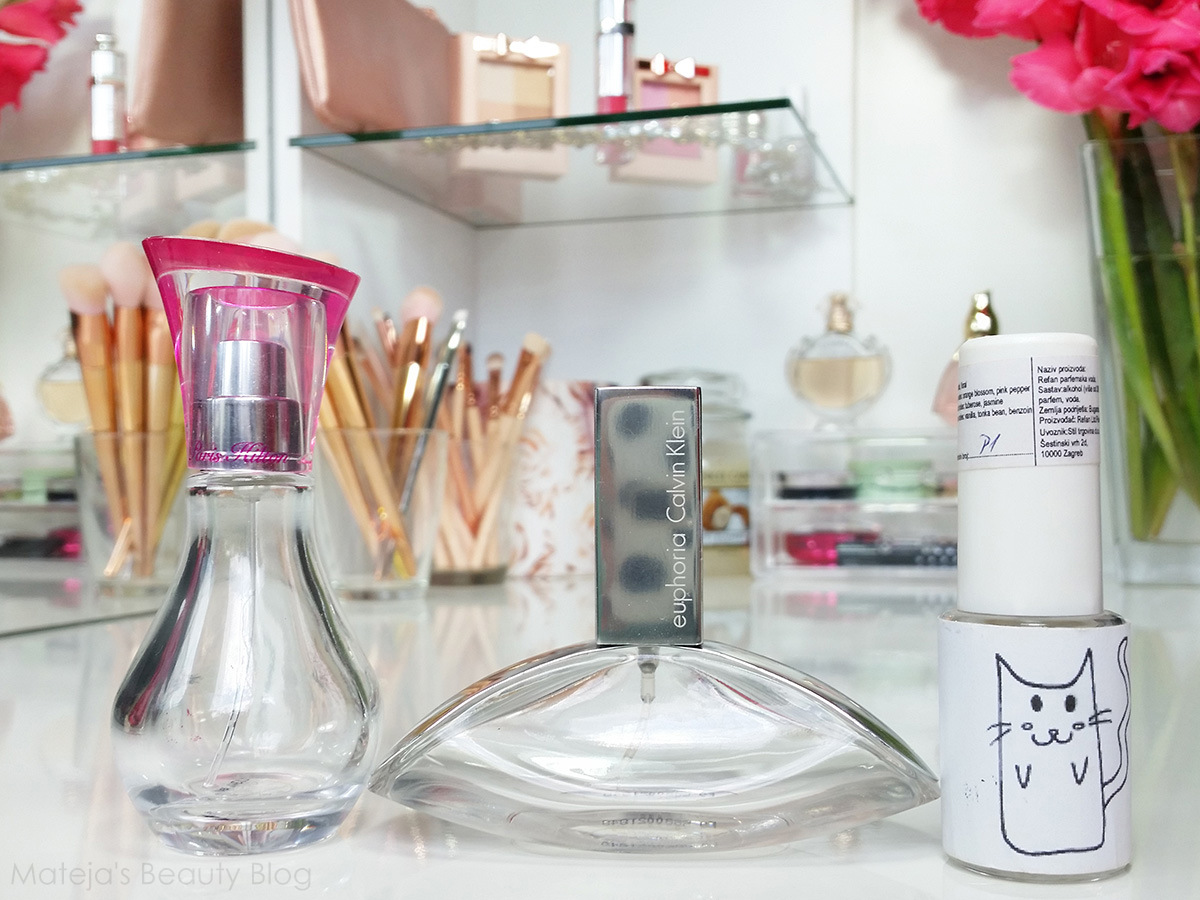 PARIS HILTON Can Can
I had this for ages and it’s not that I was struggling to use it up, rather that I saved it like crazy because I loved it. It’s like a more grown up version of teen sugary scent, though it’s still very sweet. It starts with a sweet syrupy combination which is considerably toned down by amber, woods and musk making it a more sensual candy scent and the absence of vanilla is the reason that this isn’t the typical cupcake scent, yet it still manages to evoke the warm, cosy feeling.
Repurchase: Yes.
CALVIN KLEIN Euphoria eau de toilette
I used to adore this and it actually got me a compliment or two in my life, but the scent became connected with a time I want to forget, so I needed to use it up and be done with it. I actually had the eau de parfume version as well, but I gave it away. It’s a very unique scent and one that can be a love it-hate it, but a lot of people love this for more special occasions. It starts with this sharp note that sometimes might be similar to bug sprays, but Euphoria’s real character is revealed in time when it has time to settle and it becomes this sexy, creamy floral combination. If you plan to go test it in the shop, give it time before you decide if you like it.
Repurchase: I don’t know, I don’t think so.
REFAN dupe of Roberto Cavalli
I had this for way too long, so it’s gone bad by the end – I noticed Refan fragrances start developing this alcoholic, musty note after two years. It was a great dupe, I had a sample of the real thing and to my nose these were identical even in terms of staying power. The scent is a silage monster, it’s a very loud, heavy, rich, balmy and strong oriental-floral fragrance with notes of orange blossom, benzoin, vanilla, pink pepper and tonka bean. It’s one for those who want to be noticed and I actually once got a complaint about how heavy my perfume is even though I only used one spray (though we were in a car).
Repurchase: Yes.
Have a great day!