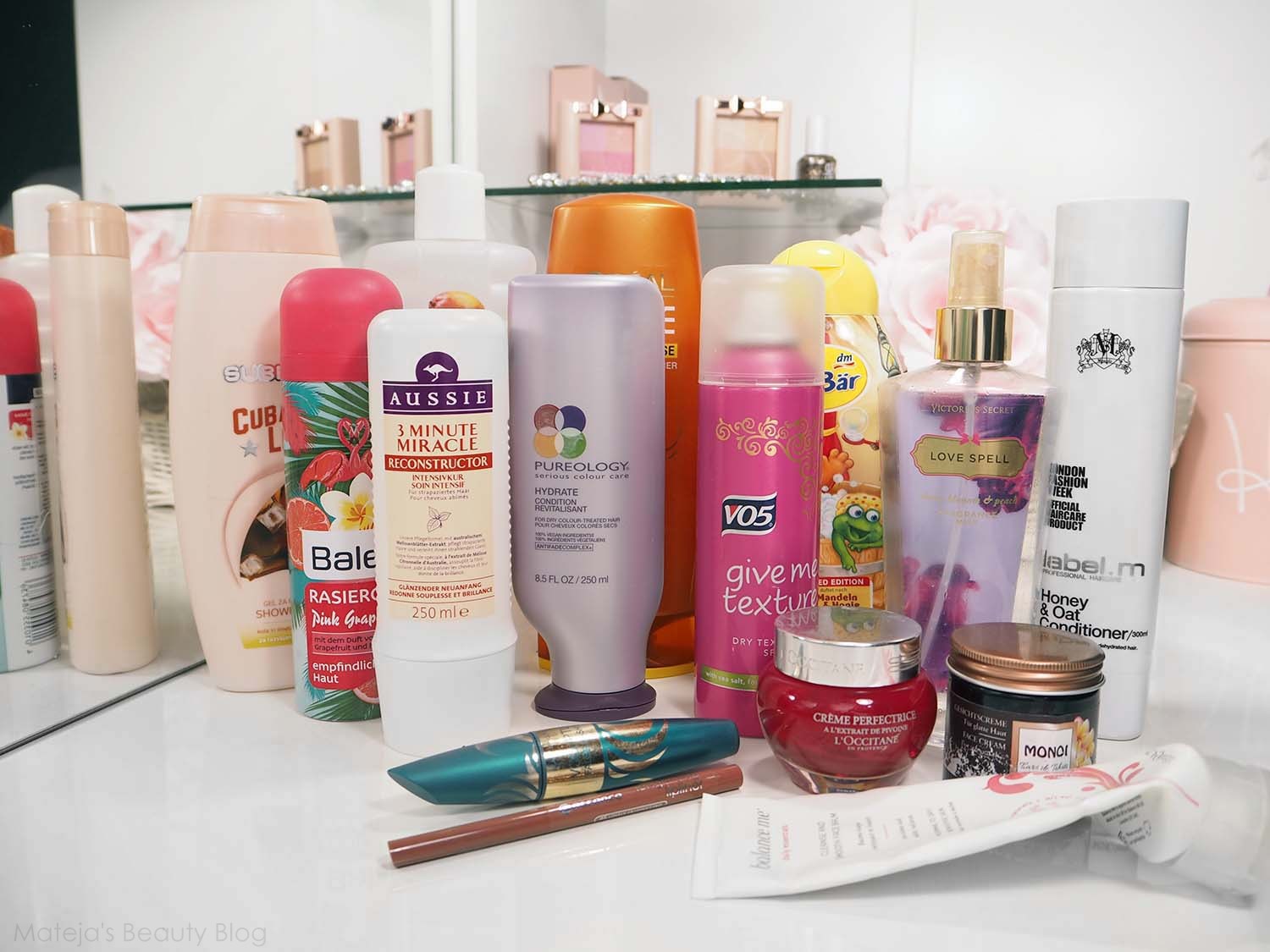 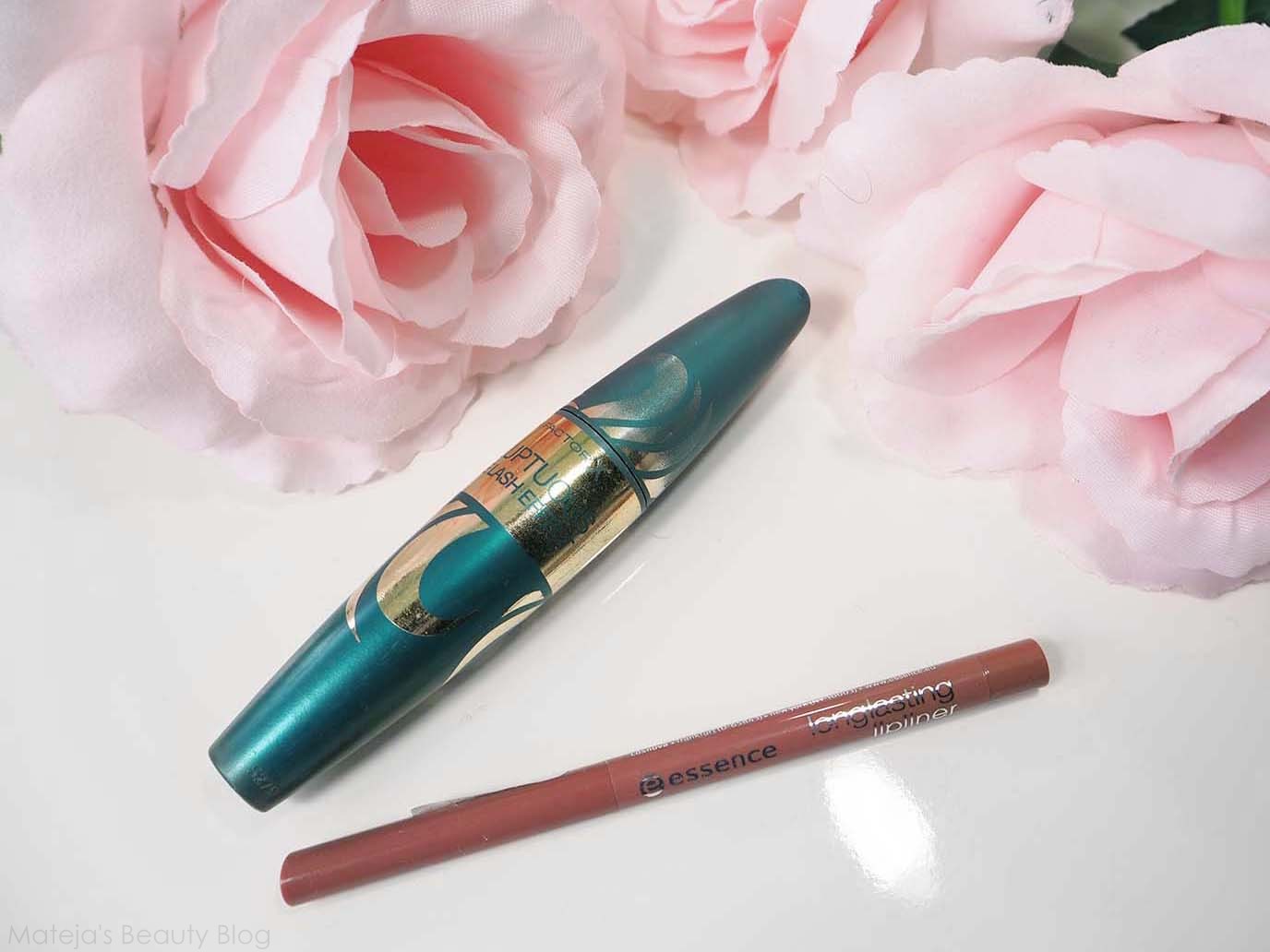 MAX FACTOR Voluptuous False lash Effect Mascara
I still can’t believe at how much I actually like this. It’s too things I’d normally dislike – regular formula and expensive for a drugstore mascara. But I really like this one and it’s the first regular mascara I actually bought myself in five years. It’s one of the three regular mascaras I’ve found so far that is able to lift my lashes at least half way, but it also gives me volume and it’s even better at definition and length. I had to buy a new one, but finding discounts for this one was hard. By the way, the brush is huge.
Repurchase: Already did.
ESSENCE Longlasting Lipliner
05 Lovely Frappuccino
This is still one of my favourite shades for the classic 90’s look because it’s not too violet or grey, so it looks like a proper mauve-brown on me. The formula of these is lovely and I have several shades. As soon as I saw I only had a cm left, I had to repurchase it, though I had to go to a few shops to find it because it was out of stock.
Repurchase: Already did. 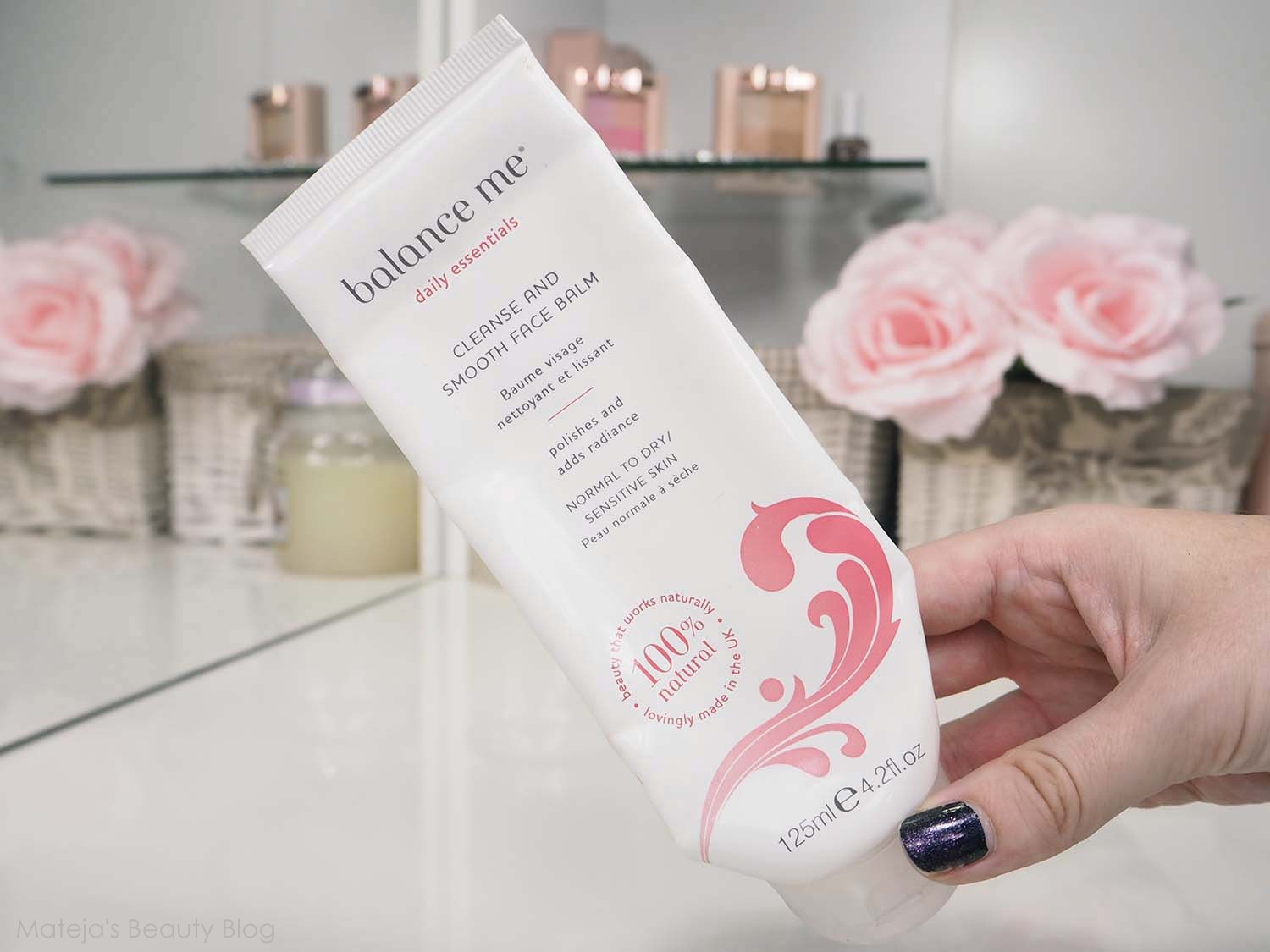 BALANCE ME Cleanse and Smooth Face Balm
I love this cleanser, I really do and it’s one of the rare ones that just works great with my skin. However, this is my third tube and every one was different. The texture of first was almost liquid, the second was a perfect creamy balm, but this last one was just too thick. It’s a balm cleanser that melts under heat of the fingers and it also contains gentle scrub particles. It cleans the skin well, doesn’t dry it out and doesn’t make my vision foggy. I’m currently trying a couple of other ones to see if I find another I’ll like, but is more consistent one, otherwise I’ll repurchase it soon (the current one from Trilogy isn’t working that well for me, while Soap & Glory’s Ultimelt is very different from what I expected).
Repurchase: Yes. 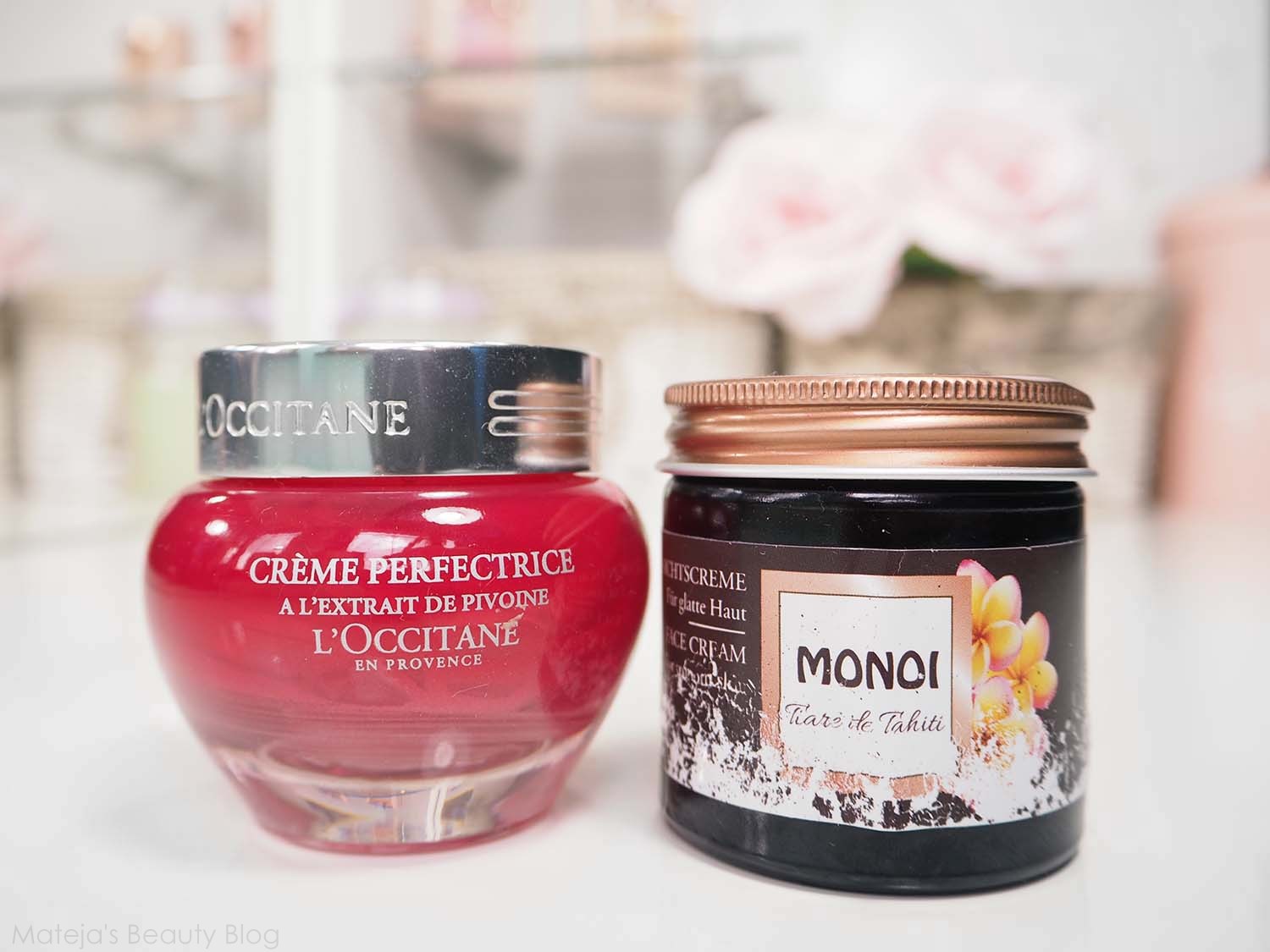 L’OCCITANE Pivoin Sublime Perfecting Cream
This is a cream I adored almost in every respect – the texture, the feeling on the skin and the winning scent. However, with longer use I realised it might not love me and I’m still gutted about that. As great as it felt on my skin at application, the fact is that my skin just never looked right with this pot of moisturiser. It was nothing major, just that I got an occasional blemish more frequently. The old Angelica version was brilliant for my skin, but this one just didn’t work as good for me. I ended up liking Creatures de Monoi more. The packaging is stunningly gorgeous and I’ll keep it for decoration. I still recommend you at least try it because everyone’s skin is different.
Repurchase: No.
CREATEURS DE MONOI Face Cream
I’ve used this up a while ago, but this is one of my favourite moisturisers I’ve had. It’s nothing revolutionary or special in any way, it’s just a simple, lovely cream that keeps my skin in check. I really like the smell of it too, though it’s not monoi oil. Hated that the label got so ugly fast because I’m one of those crazy people who want their products to look perfect forever.
Repurchase: Yes. 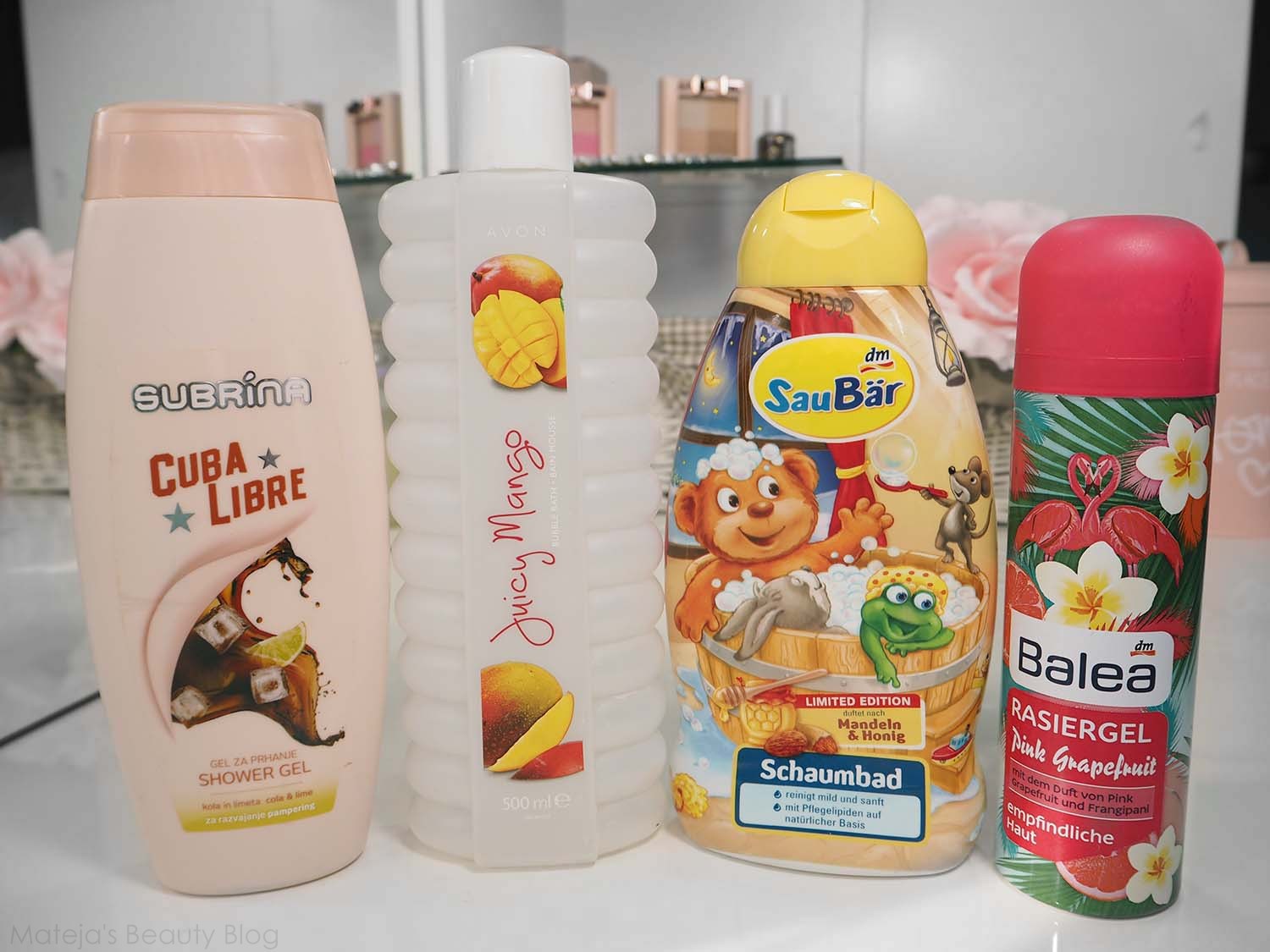 SUBRINA Shower Gel
Cuba Libre
This ended up being a big success in the shower and everyone loves it. It’s a very simple shower gel, not nourishing at all, but it smells like Haribo Cola gummy sweets.
Repurchase: Already done.
AVON Bubble Bath
Juicy Mango
I haven’t changed my mind about this. For all the raves I heard about Avon bubble baths and mountains of bubbles, it was disappointing. And I wasn’t the only one who though that. I used a ton of it and I got a max of 10 cm of bubbles. The one from Eurospin is better. The scent is more on the boring side because it’s a soapy mango instead of a juicy or candy mango, plus once it’s in the bath, it’s not really noticeable.
Repurchase: No.
SAUBÄR Schaumbad
Honey and Almond
I got this because in the shop the scent was delectable. I adore honey scents, but they are impossible to find (good ones) and this appeared to be it. It wasn’t as impressive as I had hoped neither in the bathtub or shower. It’s was a very liquid product and I never like that, plus the scent ended up being boring. Bubbles also weren’t its strong point.
Repurchase: No.
BALEA Rasier Gel
Pink Grapefruit
I liked this edition from the start because it’s a bitter citrusy scent, but I got used to it quickly. I also found that the quality isn’t as good as some I had before. I currently have the coconut and Rummelplatz lemon pie edition, and only the later is as good as these used to be.
Repurchase: Yes. 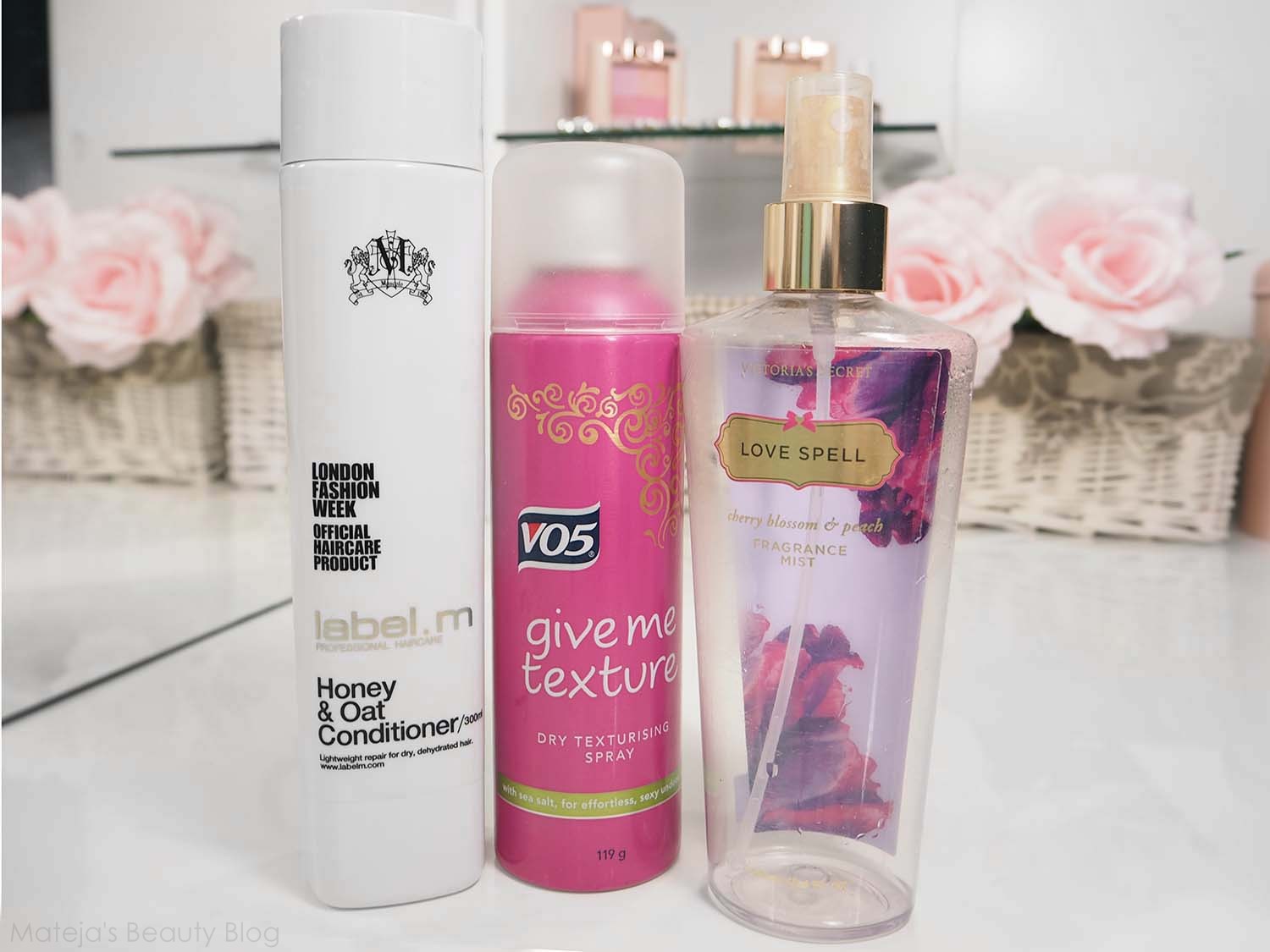 LABEL.M Honey & Oat Conditioner
This bears an uncanny resemblance to Tigi’s Oatmeal & Honey conditioner, which shouldn’t be a surprise considering the brand was established by the same people as Tigi (and Tony & Guy). The ingredients of this are lovely and it has a proper Christmasy scent of spices like cinnamon and clove mixed with honey making it smell like gingerbread. I wasn’t that blown away by it when I first used it, but I’ve since changed my mind because it makes my hair feeling smooth and even a bit soft, an accomplishment for any conditioner when it comes to my thick, coarse hair. It’s pretty light and I notice zero weighing down of the hair, so it could also be nice for hair that isn’t as annoying as mine, but if your hair gets greasy fast, I wouldn’t risk it. The scent really is something you’d like to smell only in colder months.
Repurchase: I would.
VO5 Give Me Texture Dry Texturising Spray
This was the first texturizing spray I liked, though I now switched to Charles Worthington. It’s like you’d mix a dry shampoo and salt spray plus added a little bit of hairspray, but it leaves the hair less crispy than CW, which means it also has less hold. It creates that messy, straight-out-of-bed texture, which makes the curls more lived in and it of course also gives volume, plus is mattifies the hair.
Repurchase: Yes.
VICTORIA’S SECRET Love Spell Body Spray
For a long time this was my favourite summer scent, as it smells so fruity and refreshing (like one of my favourite old fizzy drinks Bibita). I’ve had this for way too long (250 ml bottles are almost impossible for me to use up) and it started getting that very plasticky note, so I got used to it fast. It doesn’t last long on the skin, but some of their other versions like Coconut Passion have quite a staying power. I’ll get a different scent next time, maybe Passion Kiss, Aqua Kiss or Sheer Love. Love that they have a discount so often in Müller now.
Repurchase: Maybe, but first I’ll buy some other scent. 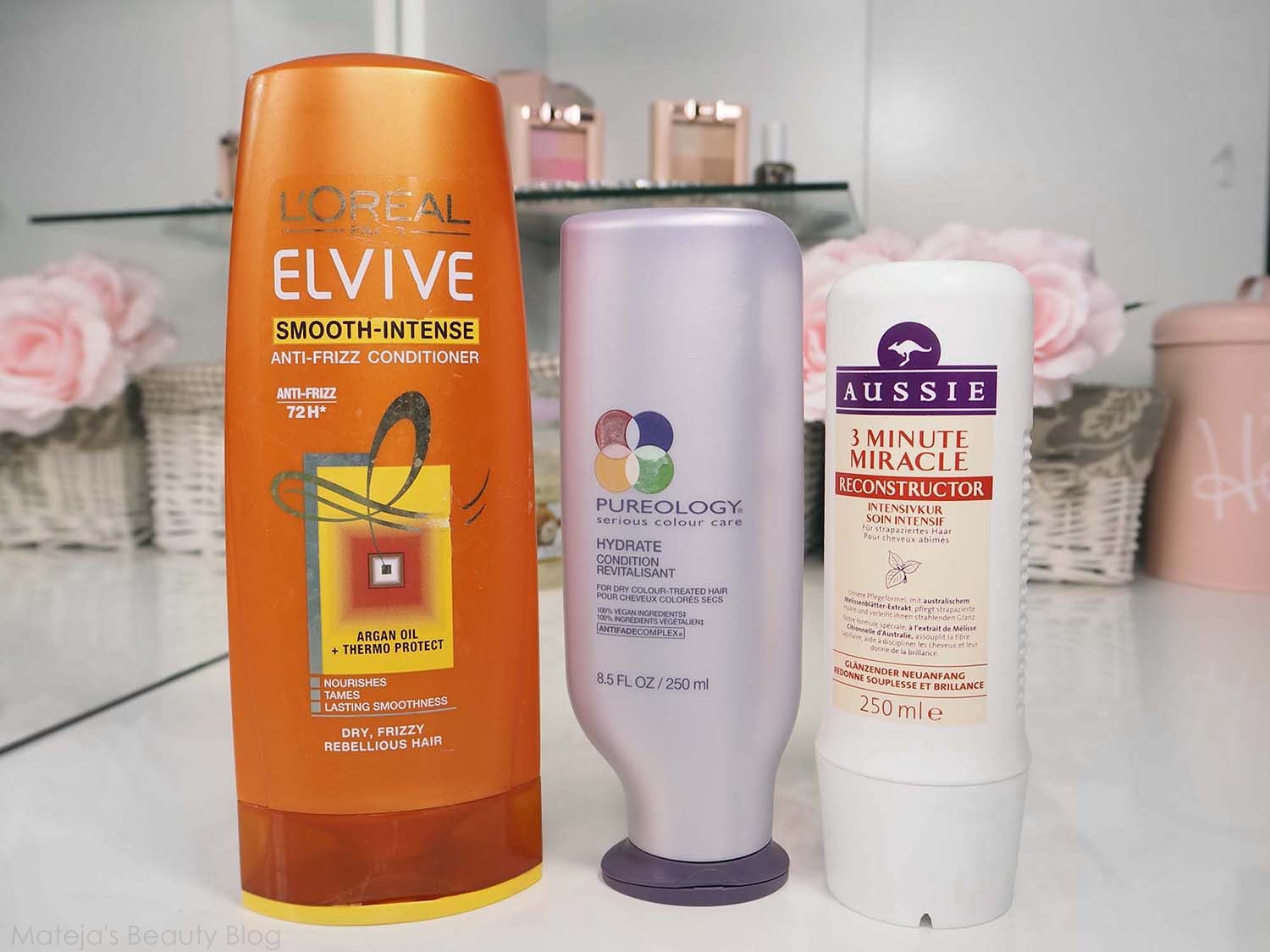 L’OREAL Elvive Smooth Intense Anti-Frizz Conditioner
Nothing special for a conditioner. It’s thick, but wasn’t enough for my hair, however, I think most people would like it.  As far as frizz control goes, it works halfway. With a hair dryer the hair is noticeable sleeker, but the frizz pops back up fast. I believe Extraordinary Oil conditioner serves as a replacement for this, I have both and to me they are pretty similar.
Repurchase: No.
PURELOGY Hydrate Condition
I wasn’t that impressed with this from the start. I meant it’s a nice conditioner, it’s just not excellent the way I expected based on all the praises I heard. But it actually ended up being a conditioner that has better long-term results than immediate ones. With frequent use my hair was in so much better condition than when use the cheap stuff. It was more hydrated and nourished, so I ended up liking it. It’s a bit of a strange one because it smells strongly of mint and it actually tingles on the skin even when you wash the hands after application.
Repurchase: Yes or maybe.
AUSSIE 3 Minute Miracle Reconstructor
I still love this and it’s one of the best drugstore conditioners plus it smells yummy like bubble gum. It’s expensive here, so I’ll only repurchase it when it has a decent discount.
Repurchase: Yes. 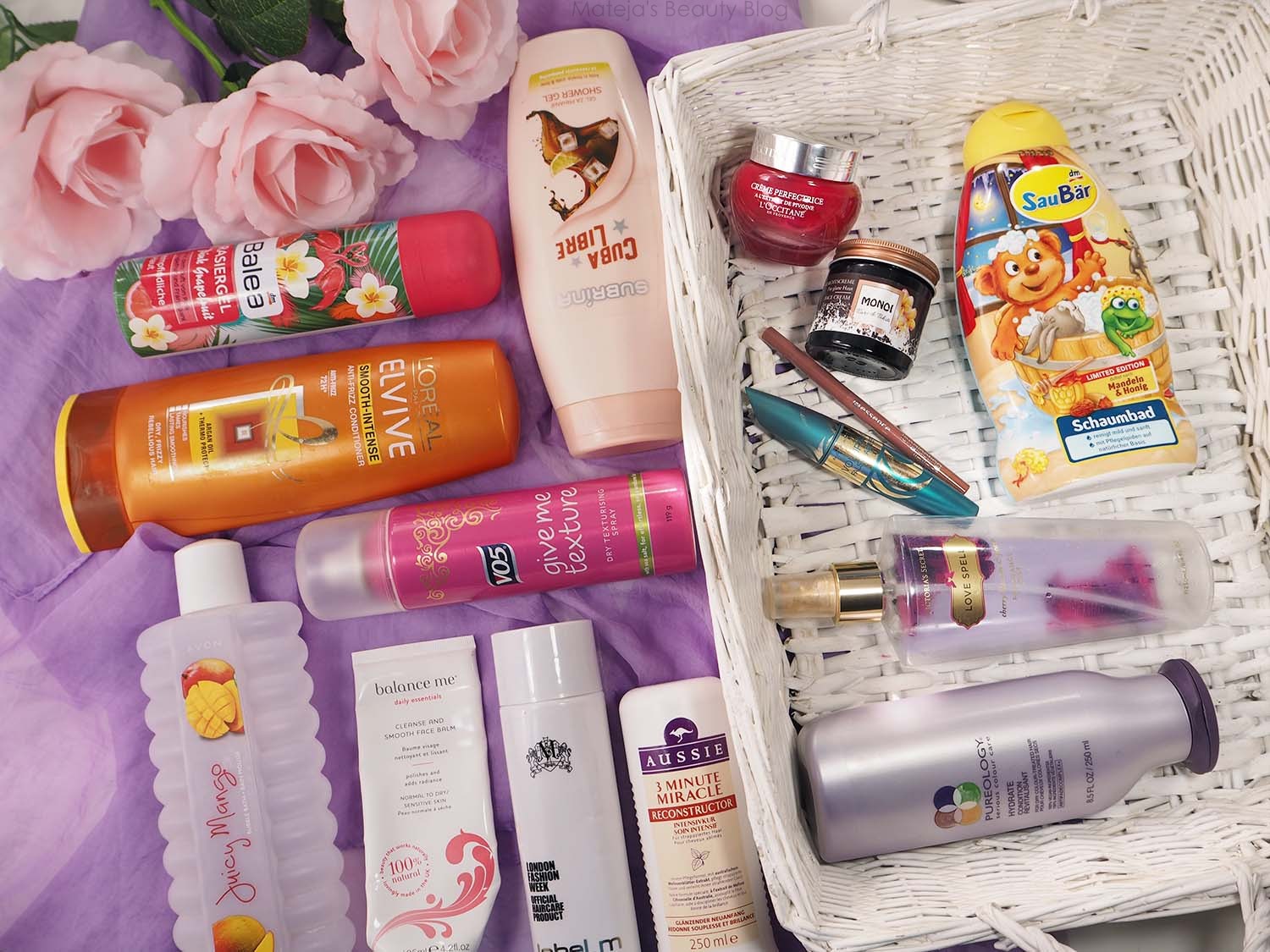