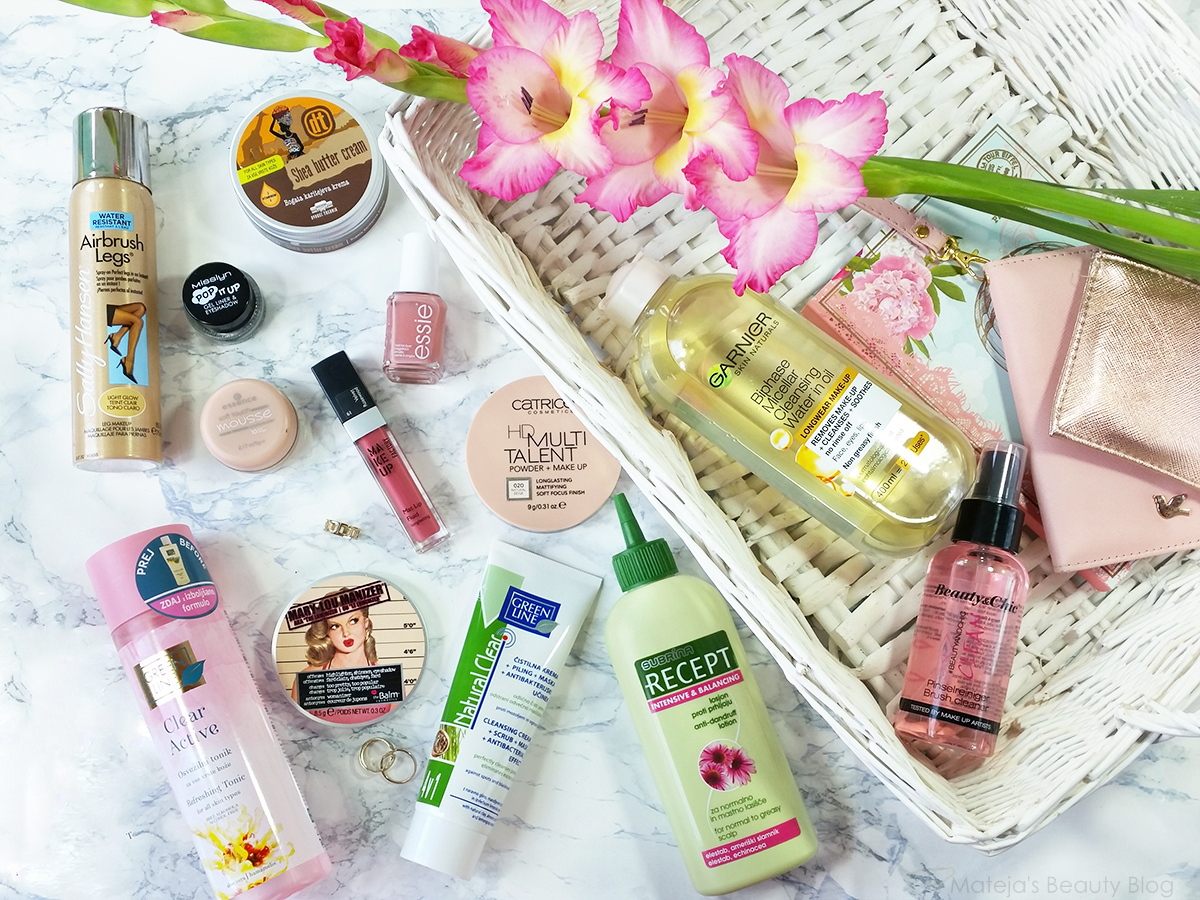 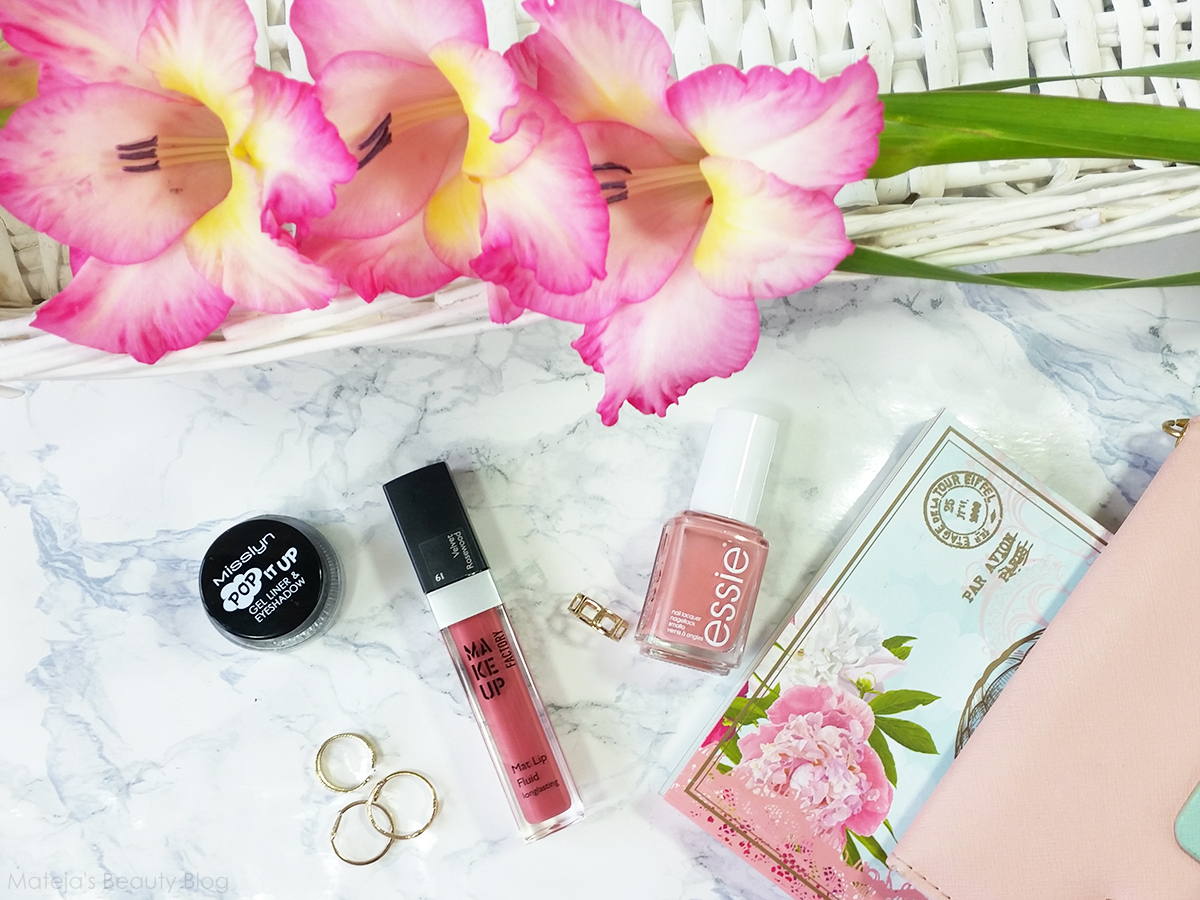 MISSLYN Pop it Up Gel Eyeliner & Eyeshadow
01 Black Outlines and 15 Blue Eyes Wide Open
Misslyn released this beautiful Pop Art inspired LE for summer and I was lucky enough to try most of the bits, but these eyeliners impressed me the most. I know they say they are eyeshadows as well, but they work far better as eyeliners and they are great quality. Actually, I had Mac’s Fluidline some time ago and I see no difference. All three shades are very pigmented, smooth, don’t smudge and last so well on the lids, yet I love the classic black one the most, since I wear black eyeliner almost every day, though surprisingly blue one caught my heart too because I just feel it works so well for me. I have looks with all three in my review.
MAKEUP FACTORY Mat Lip Fluid
61 Velvet Rosewood
So I finally purchased this and naturally feel in love with it. I’m a sucker for matte lip colours, plus recently for these type of dark natural rosy shades, so obviously it’s a win-win situation. This was on my lips 95% of the month, so I really wore it to death. It’s not the best matte formula I’ve tried (theBalm wins for me), but it’s nonetheless excellent and it has a lovely matte finish. The scent is the only thing that bothers me because it reminds me of Rimmel’s Apocalips, which smells awful, but it doesn’t last long.
ESSIE Nail Lacquer
Eternal Optimist
I know I featured this in the previous favourites (like anyone cares if it repeats, right), but it’s been on my nails this month as well. I think I only wore one other shade in the beginning of the month and didn’t like it as much, so I quickly changed it and wore this one all the time, in fact I’m still wearing it. It’s a lovely muted powdery warm pink shade with a fantastic formula. 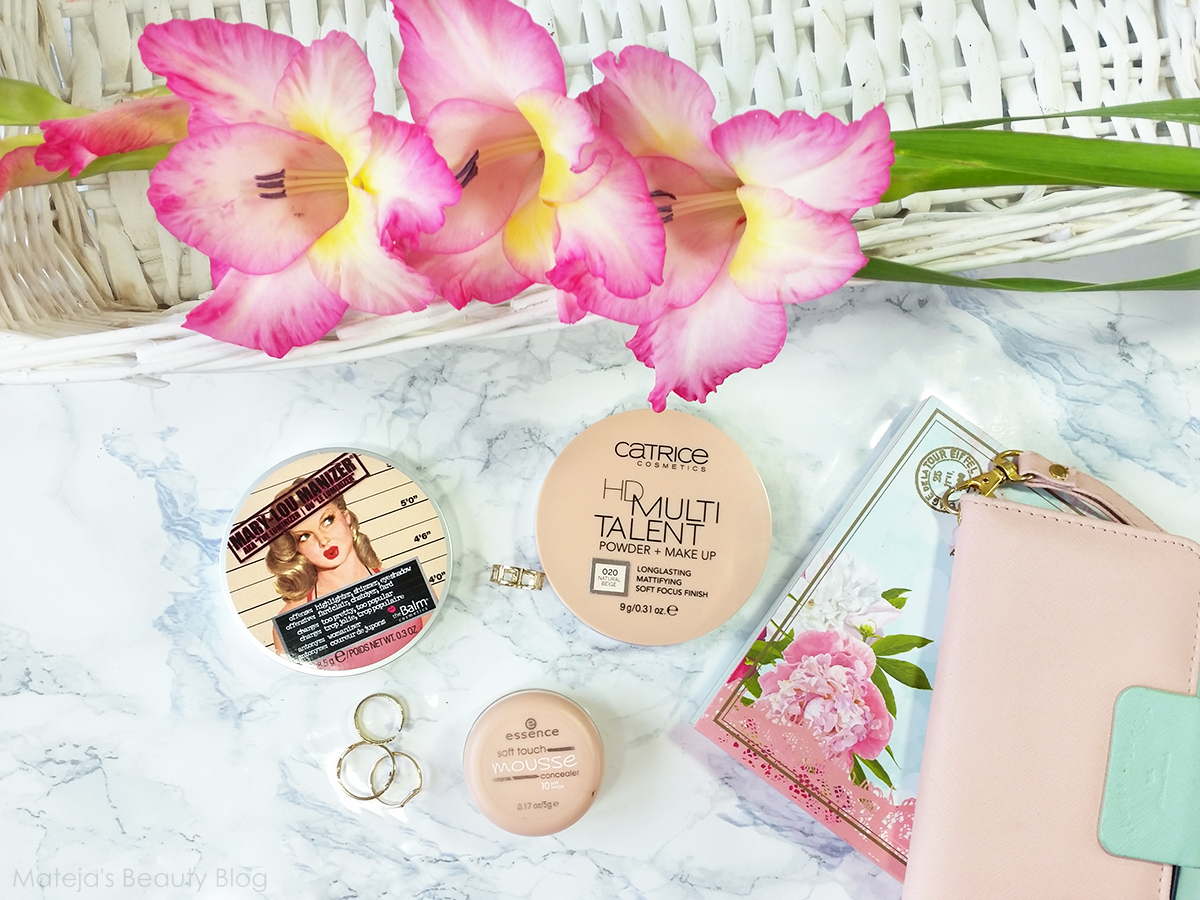 THEBALM Mary-Lou Manizer
I’ve been loving super glowy cheeks this month and this is the perfect product to achieve it. I’ve been powdering my T-zone, but the rest of the skin has this healthy, summery shine to it, which I emphasize even more with this highlighter. It’s not even that gold for me at the moment, so it’s perfect and the shine it gives is just to die for pretty.
CATRICE HD Multi Talent Powder + Makeup
I promised I will update you about this powder when my skin isn’t so dry because when I got it, it emphasized my flakes a lot and was unwearable. Well, now it doesn’t. It mattifies the skin well and though I can’t say it looks invisible, it’s not too powdery, it even manages to hide the pores a bit, but you need to buff it into the skin. It promises to add some more coverage, however, it’s very little and it doesn’t really even out the skin tone that well. I have shade 020 and it’s excellent for my pale skin, so I don’t know how good is the range for darker skin tones. I’ve been using it a lot this month, almost every day because it’s the best mattifying powder I own at the moment (better than Essence Stay All Day Translucent Fixing Powder, which is just too white) and my SPF products are just so shiny right now, so this tones it down. It’s not my favourite powder, but I included it here nonetheless to update you about it.
ESSENCE Soft Touch Mousse Concealer
This is just perfect for this time of year. It’s a very matte product so now that my skin is a bit greasier, it’s fantastic to keep oil at bay as well as to hide pores, but I only apply it around and on the nose and a bit on the centre of the forehead, so where I need it. I said in my review that I see this as a tinted pore minimising primer (it has about medium coverage) and that’s exactly what I’ve been using it as. I can’t see it working on dry skin though because it will emphasize flakes. 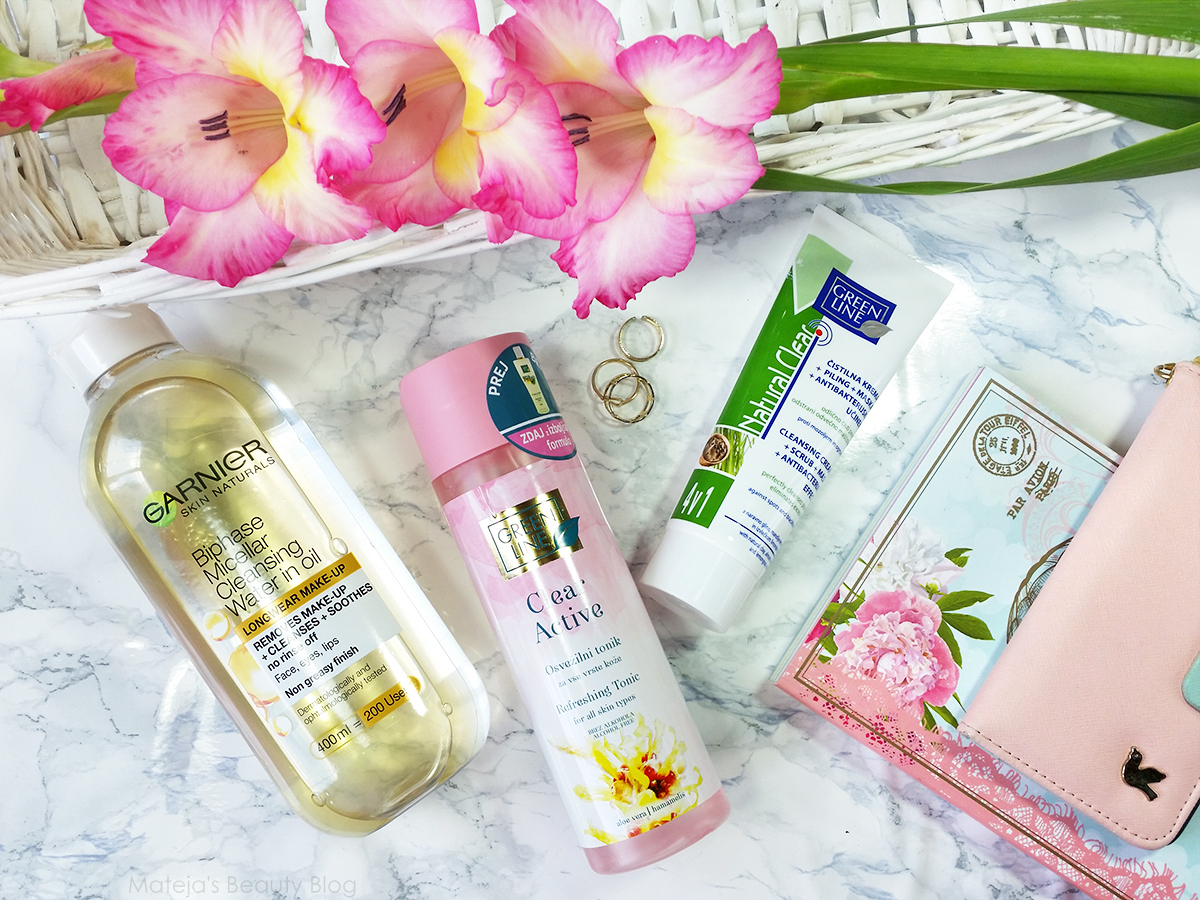 GARNIER Biophase Micellar Cleansing Water in Oil
I got this in the middle of the month and we really clicked from the first use. It’s like a micellar water/duo-phase remover hybrid, so it’s stronger than regular micellars (yes, including Bioderma), but unfortunately also weaker than proper duo-phase removers and waterproof mascara it still a challenge for it, though it of course removers other makeup with ease. What I love about it is that it’s not at greasy and it leaves the skin feeling so soft (a combination of silicones and argan oil), it’s also not at all drying. So far it hasn’t broke me out and my skin is looking pretty good, but I won’t rush to judgement, as it’s still early days. I adore the scent of it as well, because it reminds me of L’Occitane’s Peony range, only this scent it a bit more citrusy.
GREEN LINE Clear Active Refreshing Toner
I can’t say I’m much of a toner girl, in fact I’m one of those people who trimmed her skin care routine to less than three minutes (washing + my Nuxe oil, currently also Advanced Night Repair), but this kind of grew on me. It’s nothing special, but it’s not drying and I like it has witch hazel in it. It also smells nice.
GREEN LINE Natural Clear Cleansing Cream + Scrub + Mask + Antibacterial Effect
This is one of those products that the moment I tried it, I said to myself – yup, I really like this. I would never look at it myself in the shop because I’m (perhaps embarrassingly, but not really) not into Slovene beauty brands, but this impressed me. It’s a better scrub than cleanser or mask and it’s actually quite a harsh-ish scrub, but not that much. As a mask, it’s one of those clay masks that never dries fully, which I read recently it’s supposedly a good thing, but then I feel it doesn’t pull out enough from the pores. As I scrub I love it, as a mask I think that Neutrogena’s is better. 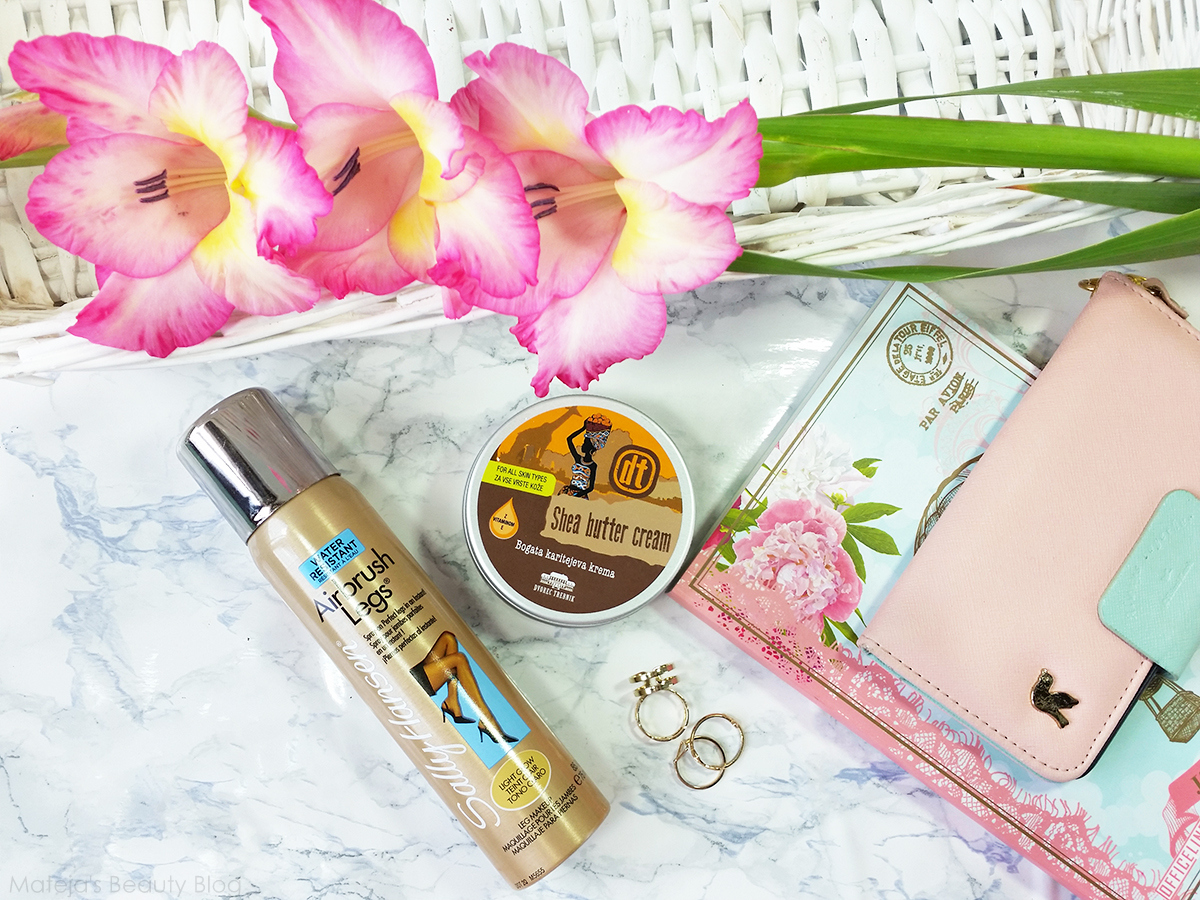 SALLY HANSEN Airbrush Legs
I dug out this from my stash again and it just reminded me how great it is. It looks so natural on my skin tone that it really can fool people into thinking my pins are not that pale, but at the same time it’s not a showy, super dark tan, rather it’s a lot more subtle. It’s an annoying product to apply because the spray isn’t the best and you need to work fast, but it can be done and it lasts so well on the skin for an instant tan.
DVOREC TREBNIK Shea Butter Cream
Another product that just grew on me instantly. In terms of texture it’s not that special, though I admit I’m one for very heavy, greasy body butters, while this one is already lighter, more whipped, which I think most people prefer. What got me is the fantastic scent, which is exactly the same as The Body Shop’s Shea Butter that has been on my wishlist for a while now. It’s nothing special – clean, a bit nutty and creamy, but I just love this scent. I almost used it up already, which for a person who takes year to use up a body moisturiser says a lot (it is a travel size though, but still, it’s not that long since I got it) 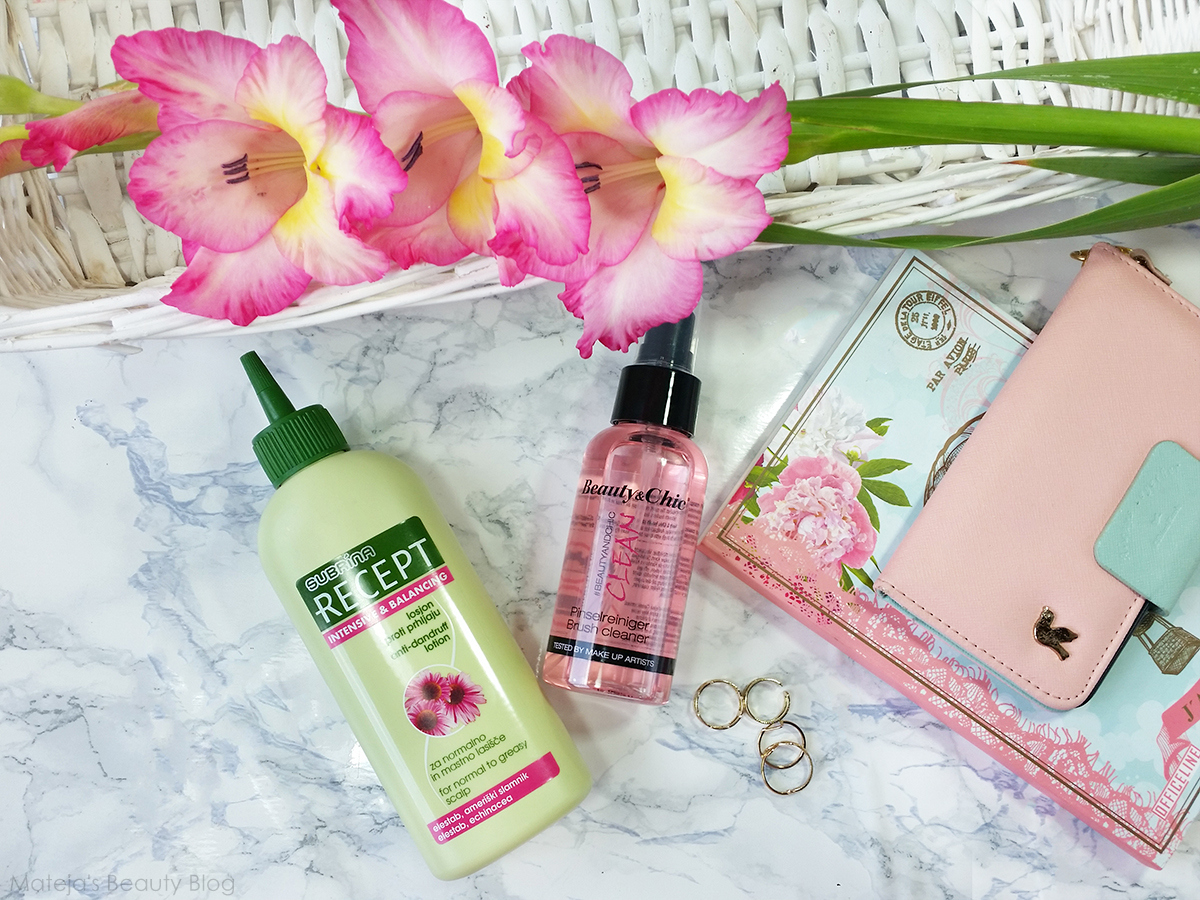 SUBRINA RECEPT Anti-dandruff lotion
I suffer from very itchy scalp on occasions, it’s due to my dandruff and it’s not pleasant, so I was searching for something with an immediate effect because you can’t wash your hair at any moment. I found this in Müller and it had a discount, so I just grabbed it and I’m no glad I did. It really helps with the itchiness. In minutes it significantly subsides. I also like the packaging because the nozzle is so handy (Alpencin doesn’t have it, so I had to use an old syringe). It’s one of those chock-full of alcohol and herbs, but at least it helps. Unfortunately as far as dandruff goes I’ve seen no improvements.
BEAUTY & CHIC Clean Brush Cleanser
I’ve had only Essence cleanser before and it didn’t impress me that much, but this one is already miles better.  It actually makes the brush look and feel clean, I mean the brush might still look a bit stained, but for something that doesn’t use water, it’s really good. I’ve actually been using it to clean my gel eyeliner brushes and it works at treat, so that made my life easier. I also feel that the brushes are dry faster with this than with Essence’s. It is heavily fragranced (which I love) and it smells like chamomile, and the scent lingers for quite a while. The latter could be problematic for those who are sensitive to fragrance. 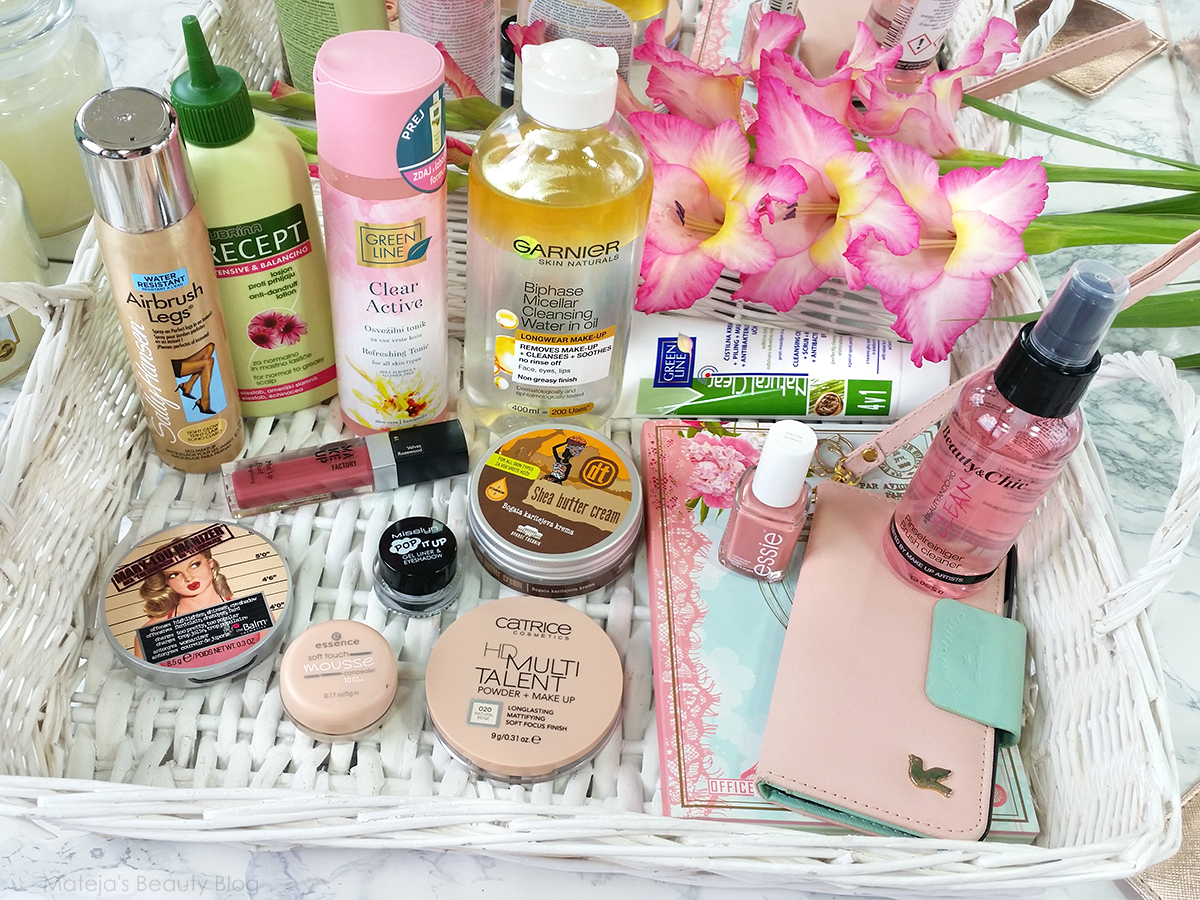