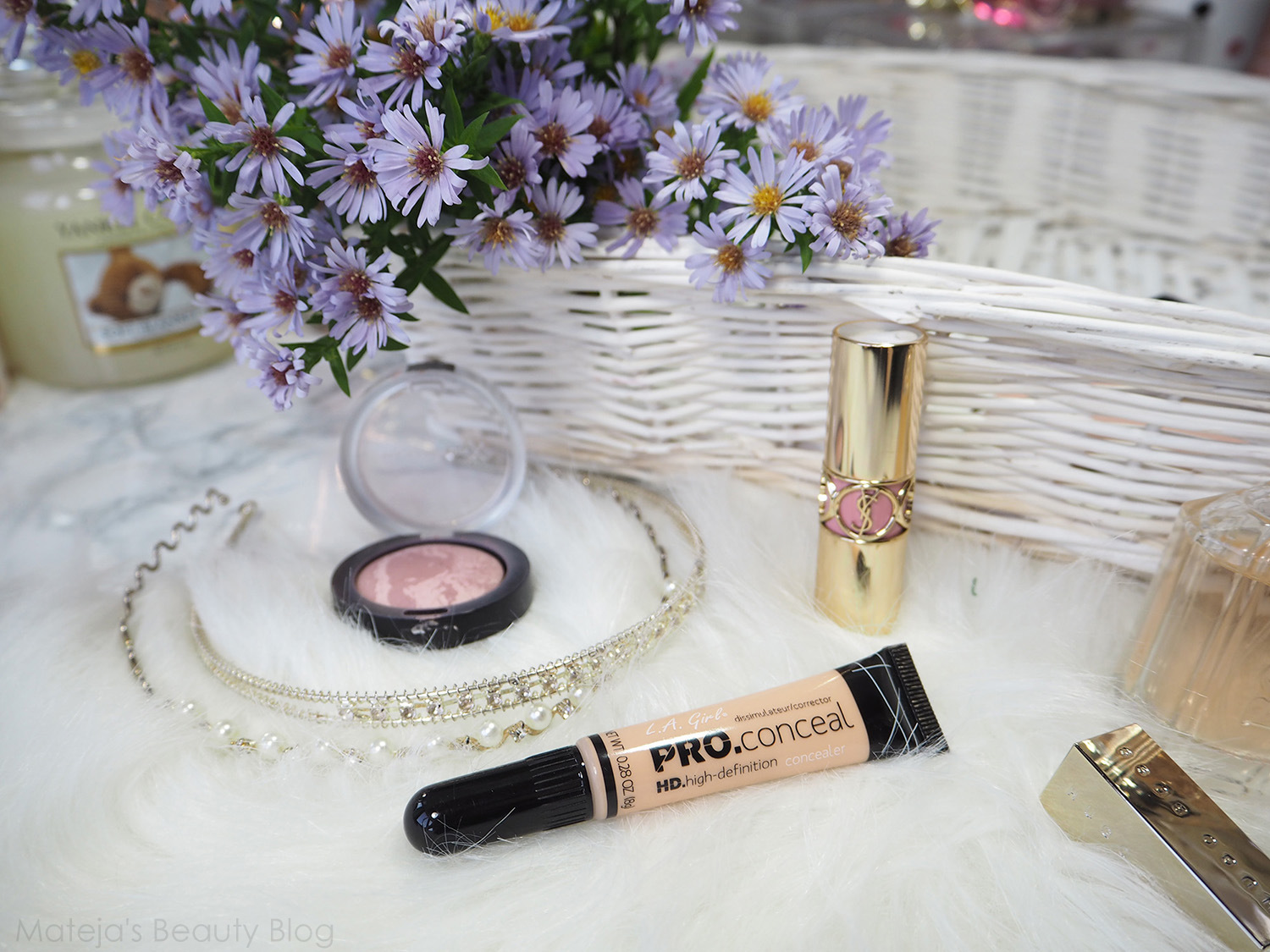 When it comes to hyped up drugstore concealers, L.A. Girl’s is one of the first to pop into many people’s heads, at least those who follow what’s hot in the US (I admit I don’t really. Why torture myself reading about cheap makeup, most of which I can’t get my hands on, though luckily things are changing). While I was researching this concealer a few things stood out – the fact it comes in impressive 18 shades, that a great majority of rave review posters are NC/W40+ and that it’s supposedly a dupe for Mac’s Pro Longwear Concealer. I don’t buy that last bit for a second, but I can see the appeal of this very affordable concealer that caters mostly to darker skin tones. The great variety of shades makes this concealer also a great choice for contouring, but I can’t help myself to not say that when it comes to light shades, this doesn’t have the best colour selection, mostly as far the undertones are concerned. 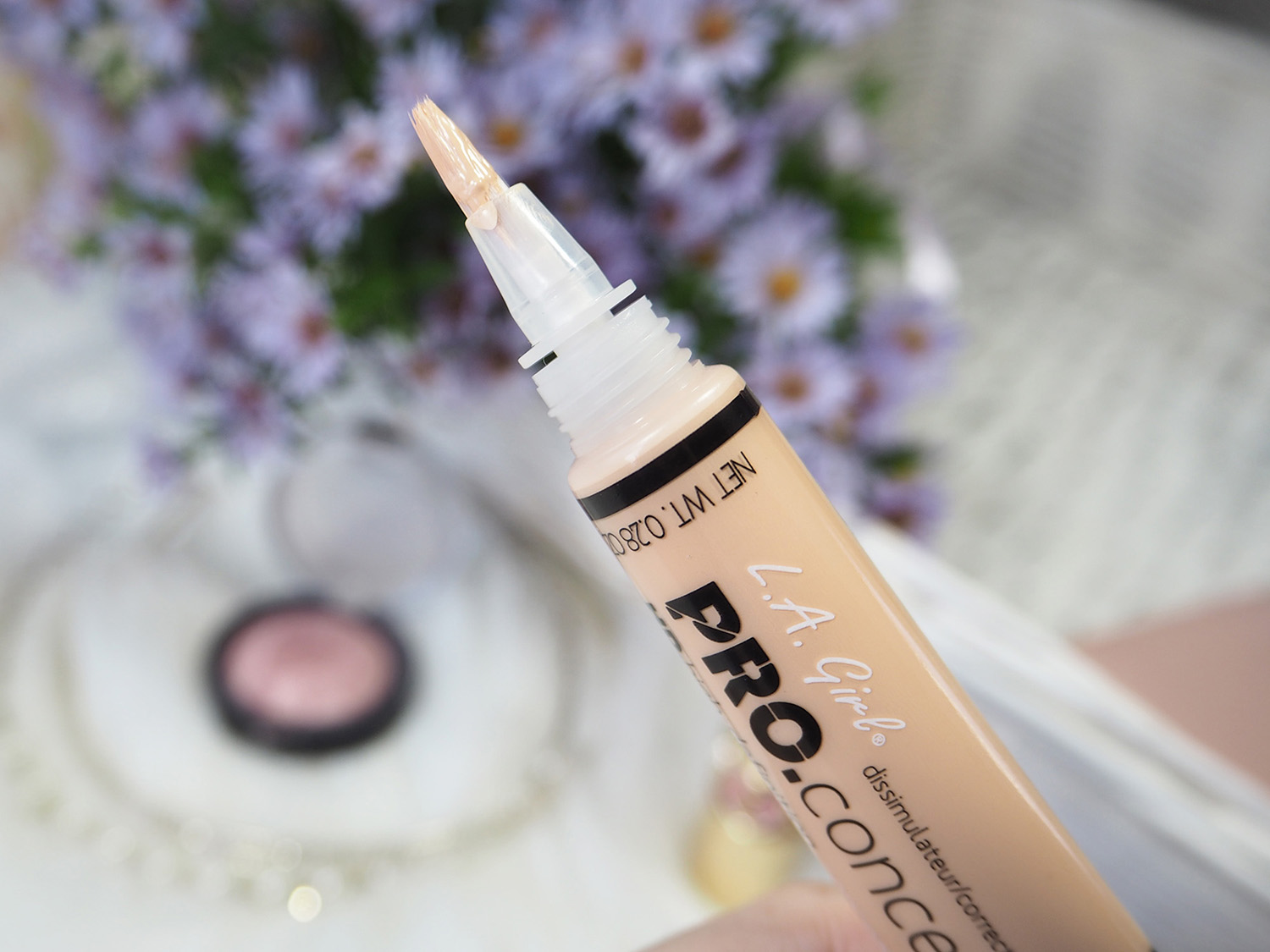 Texture and finish: It reminds me of Rimmel’s Match Perfection in terms of how it blends and how it feels like, so it’s quite a creamy liquid concealer, while for example Fit Me is already lighter and more fluid. I don’t like the brush applicator neither for applying or blending and I use one of my brushes, but it blends easily and then sets in a few minutes to a satin-like finish. This never slips into lines under the eyes on me, even without a powder. It also doesn’t emphasise my pores much, so that’s another plus. 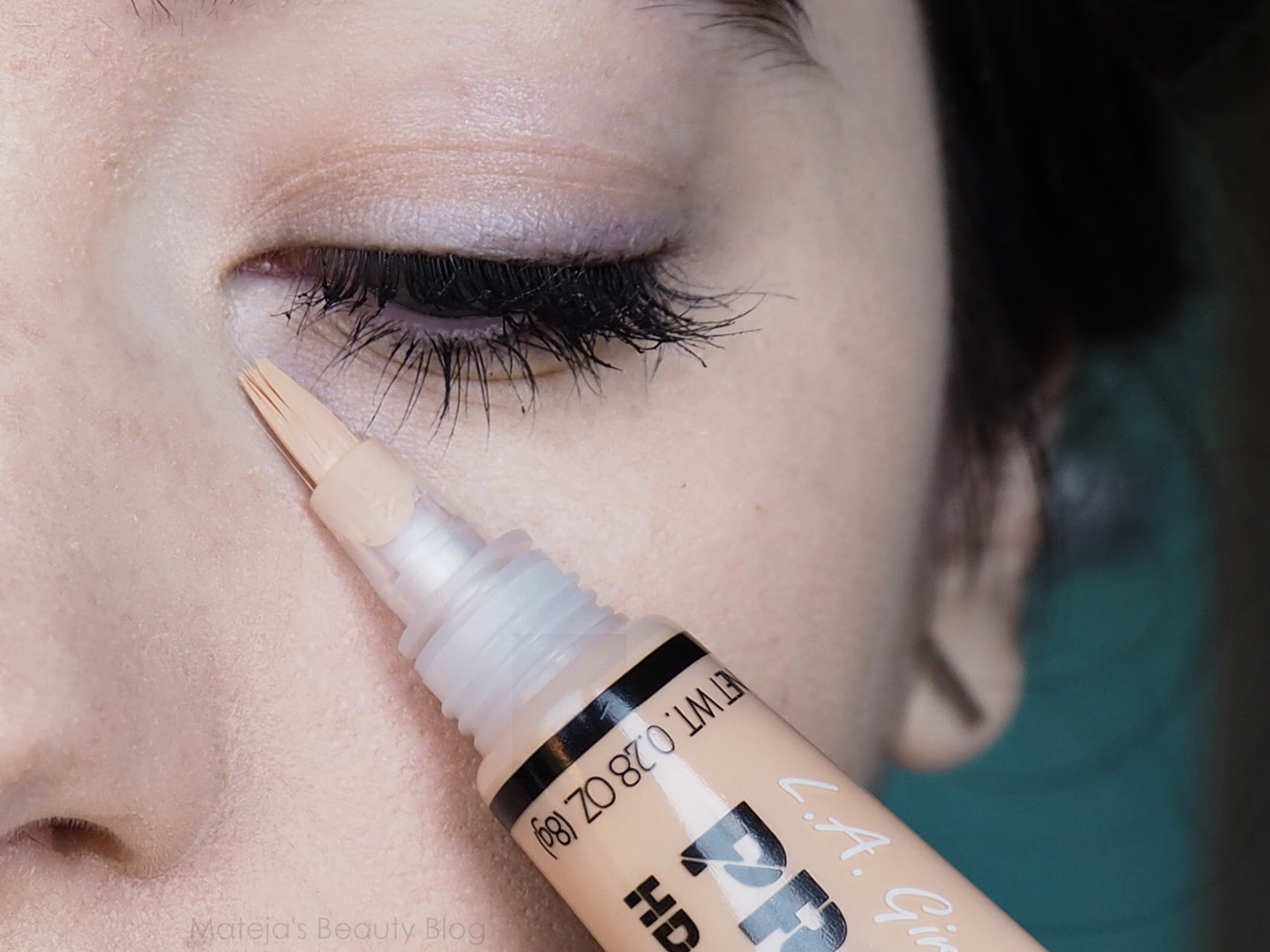 Coverage: It has a good medium to full coverage, but not as good as Collection’s or Nars’ concealer. I had a few spots that literally developed their own gravity field (exaggerating much) when I was taking before and after pictures for this concealer, so at least you get to see how well it cover them and how it looks on skin that isn’t smooth. I found it looked too cakey on those parts, but under the eyes I liked it. Too see a better close-up, you can click on the picture. 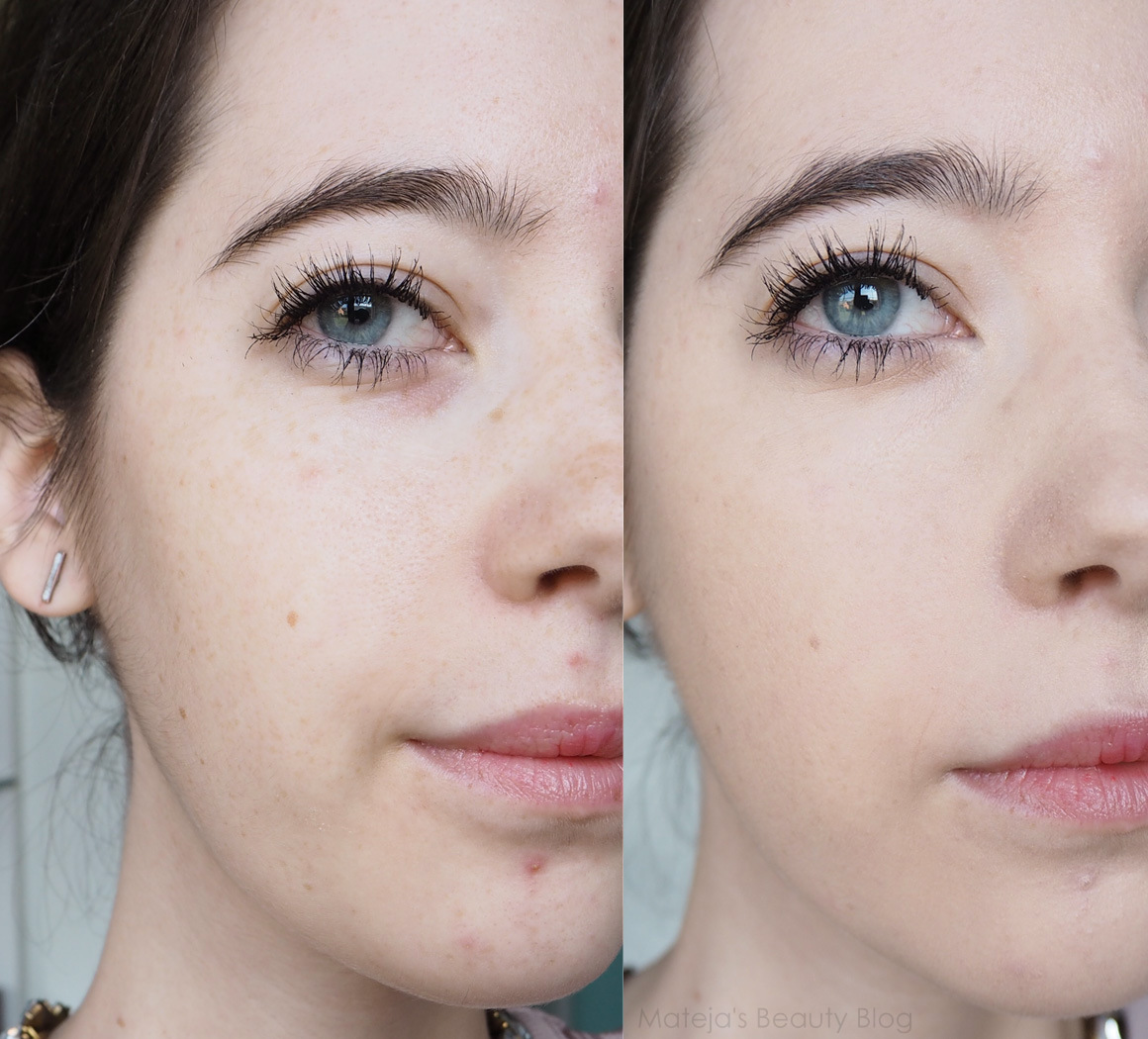 Shade: I got the lightest shade Porcelain, which I swatched next to most of my concealers and Essence’s get picture ready concealer in 10 is the closest and it’s a passable match for me, but they could have one or two shades that are lighter (really pale people struggle with concealer shades too). Collection Fair is a bit lighter and more neutral, Revlon’s Colorstay 2 Light is a lot more yellow, but similar in lightness, Maybelline’s Fit Me 15 is a shade darker, Bourjois’ Radiance Reveal 01 Ivory is a bit lighter, but similar, Nars’ Chantilly is a lot lighter. Most shades of Pro Concealer can be seen here. 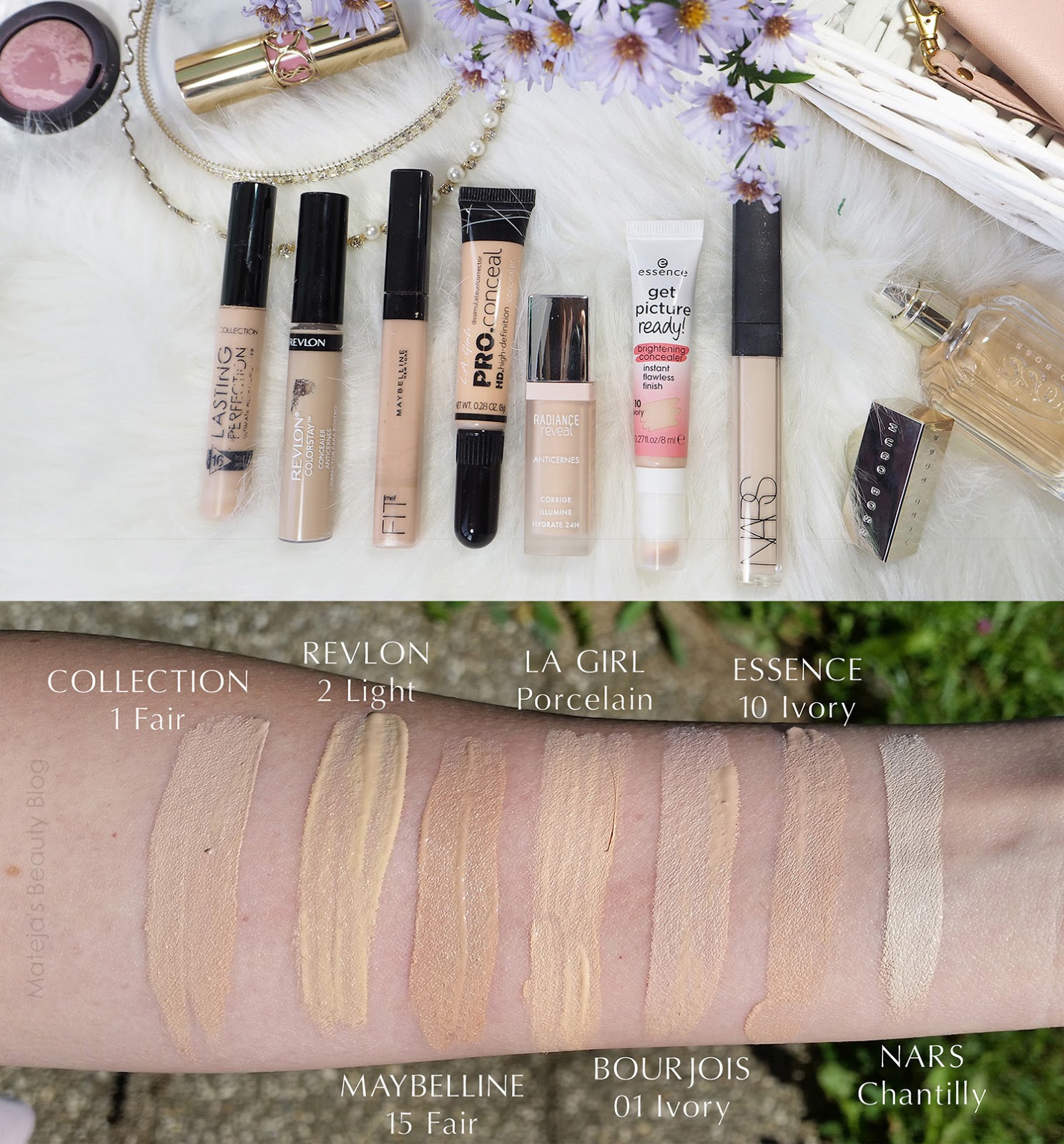 Staying Power: Staying power is average, but it wears off well in terms of how it looks around pores, as it doesn’t emphasise them with time. It doesn’t hold oil at all, so even my skin looks shiny at the end of the day on areas where I used concealer (nose, centre of forehead, chin). I prefer to set this with a powder so it lasts longer.
Packaging: The packaging is almost exactly the same as Rimmel’s Match Perfect concealer, so a squeeze tube with a brush applicator and I just don’t like it. It’s very annoying to use and I somehow already managed to use a third of it. I think that brush absorbs too much of the product and I would really prefer if it was in a tube with a doe foot applicator or just with a simple small nozzle. 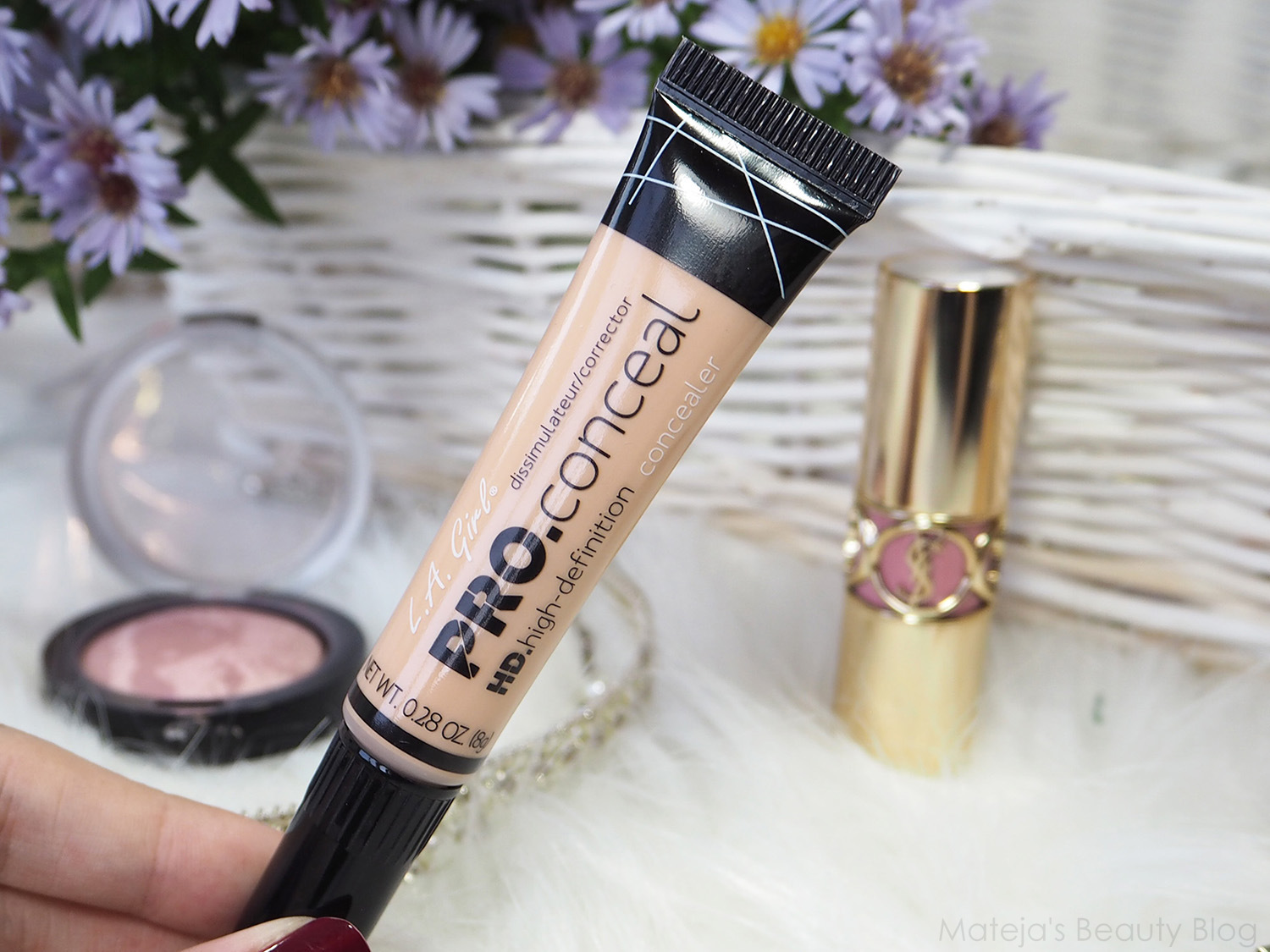 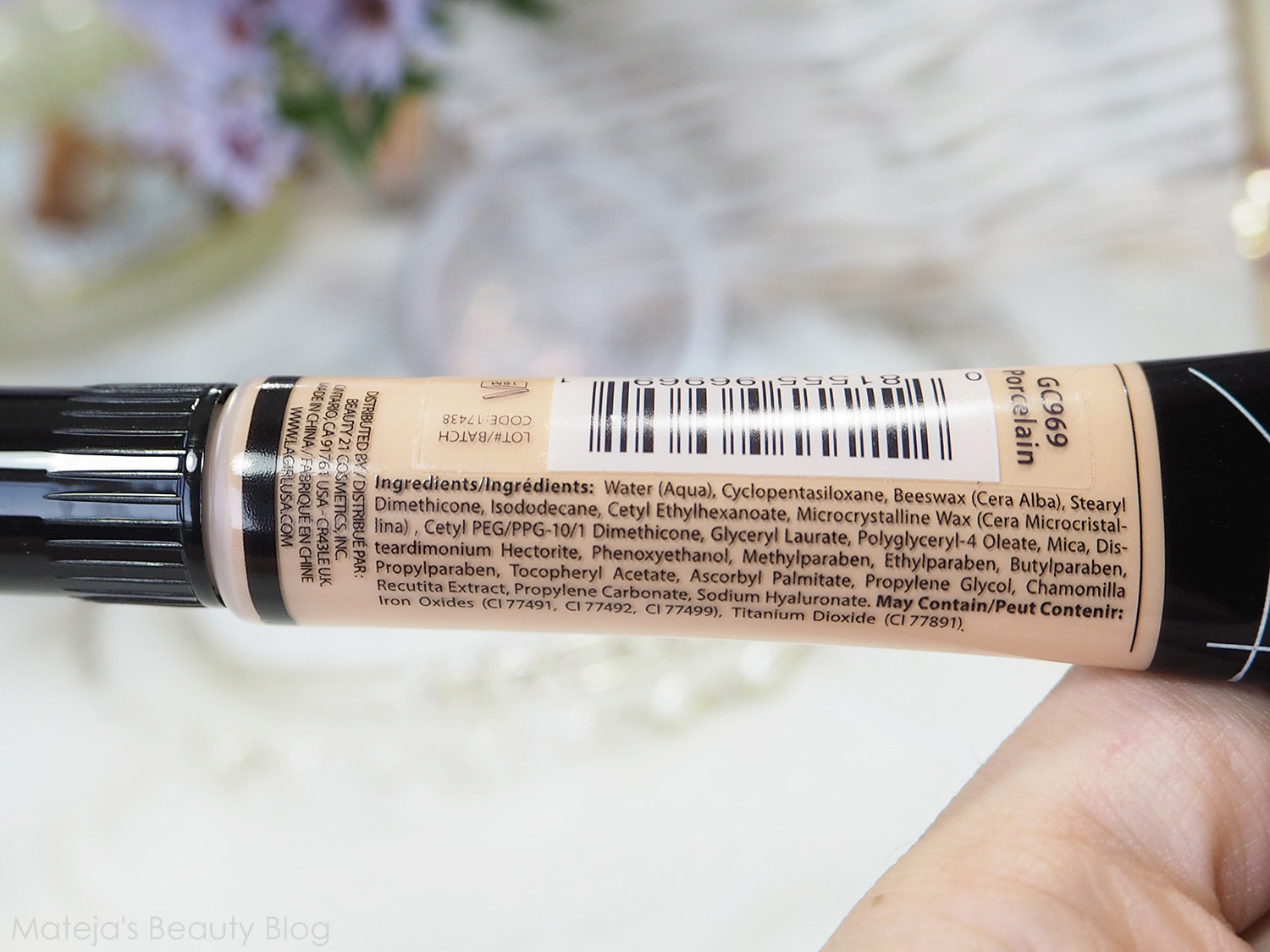 Price and availability: Mine is from Click2Chic for 5 €.
I can’t fault this concealer for anything apart from the annoying packaging, but it has good coverage, doesn’t emphasise pores, nor does it slip into lines and it wears off nicely without looking patchy. The colour range is clearly focused on medium and darker skin tones with similar shades available in different undertones, however, I read Porcelain is one of the rare light shades that doesn’t look orange, which to me means they probably failed to make more neutral shades. Luckily these are cheap in the States (if you can find them) so you can easily get several shades and mix them, plus they also have some colour correcting shades like orange and green.
Have a great day!
*PR product.