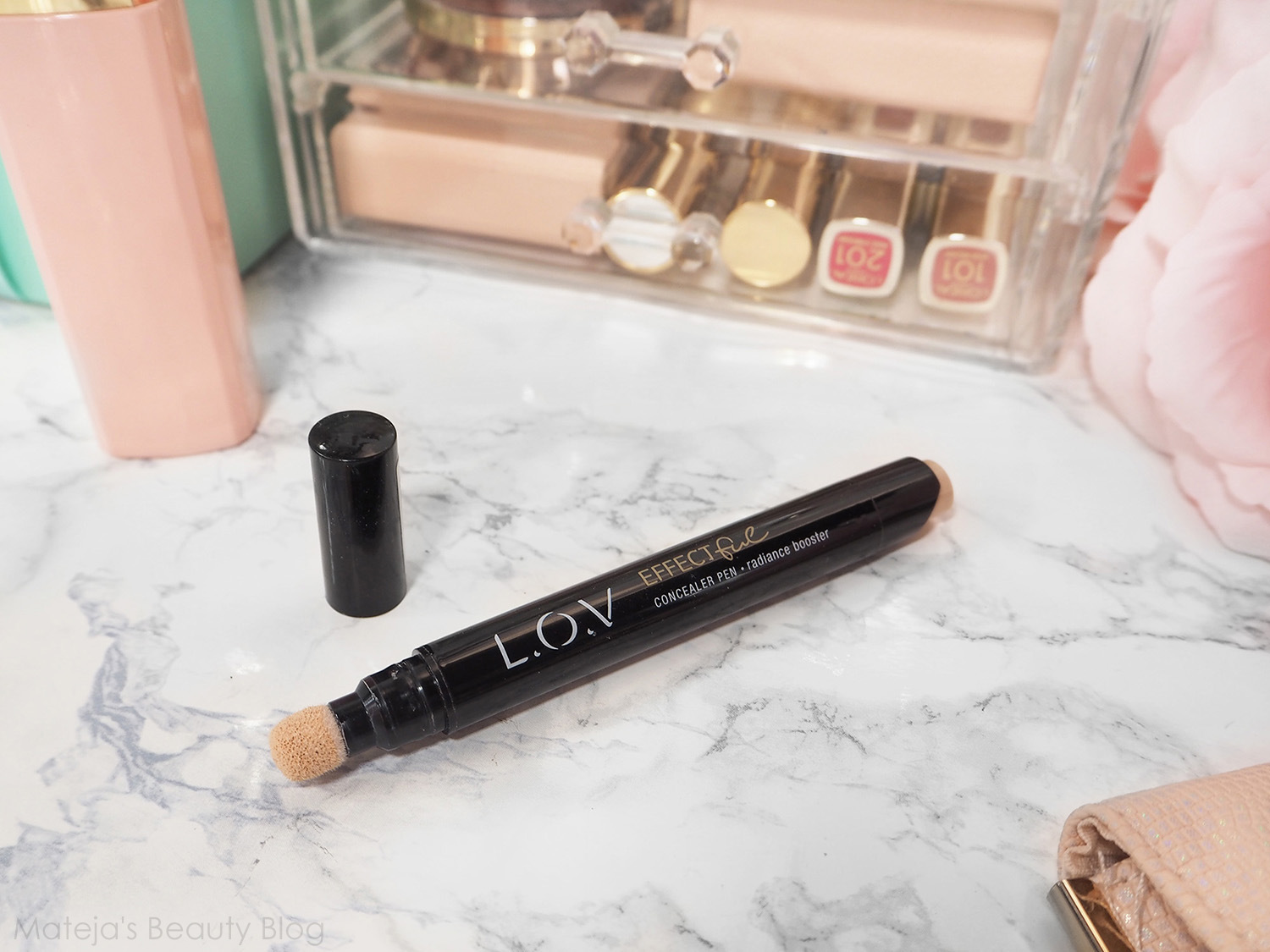 L.O.V. Cosmetics offers a few concealers, one is a palette kind, one is a high coverage CoverStory Serum Concealer and this one is meant as a brightening concealer for under the eyes. I wanted CoverStory as well, but both shades are a bit too dark for me or at least have a too intense undertone, but EffectFul has great range for very pale skins, however, like a lot of Cosnova makeup (includes Essence and Catrice), anyone with a darker skin tone (than a light-medium) won’t find a match. I’m a huge fan of Maybelline The Eraser, I just opened a new one and it reminded me of its awesomeness, so I hoped this was similar as I expected based on the shape of the applicator, but it’s not quite as good. 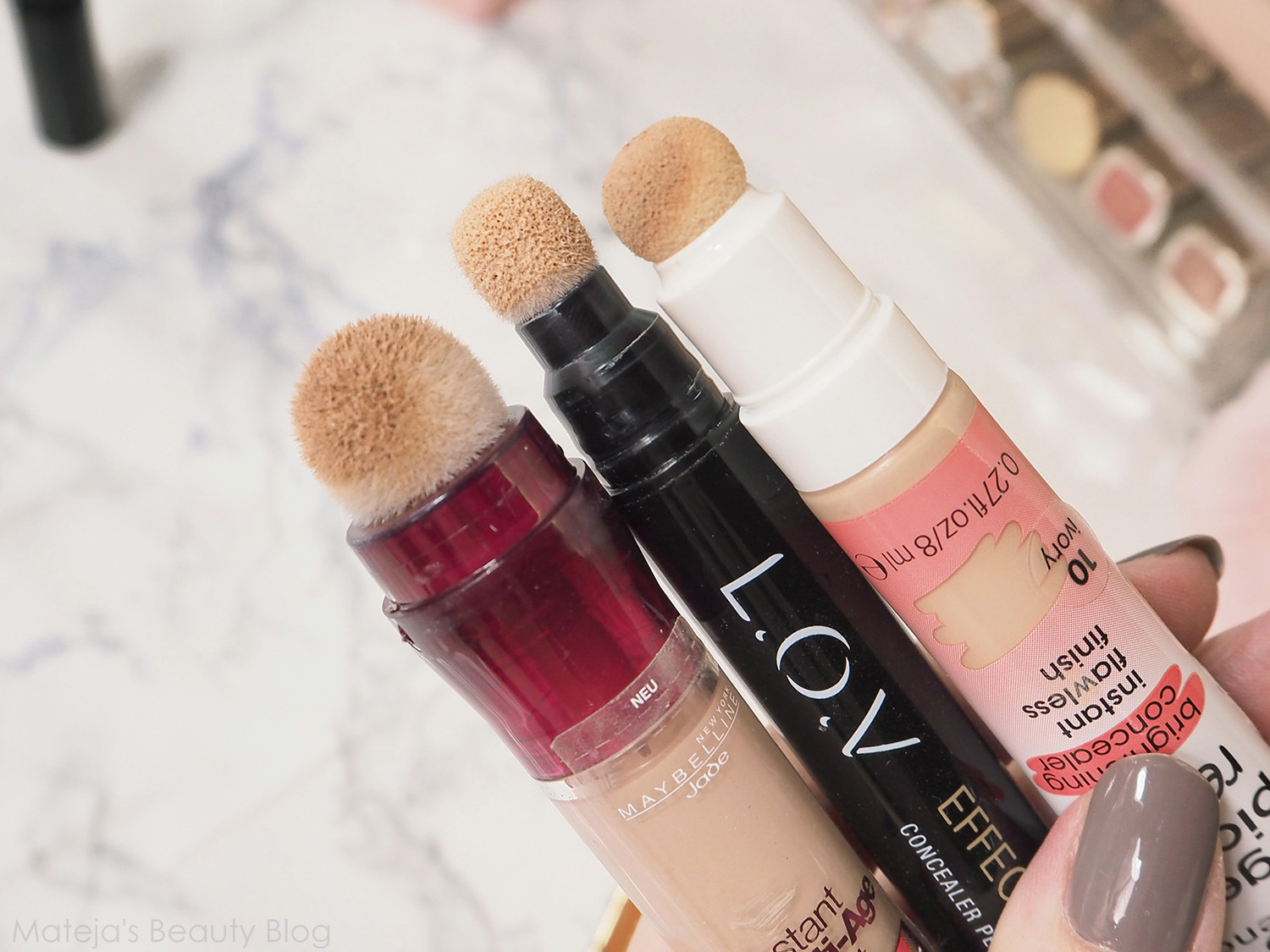 Texture: Similarly to The Eraser it has a very thin formula, however, this one is not very pigmented. Actually it’s closer to L’Oreal’s Lumi Magique and probably Touche Eclat, which are sheer and meant more as highlighters. Still you can apply more and it looks completely natural. It’s so liquidy that in order to avoid shifting the pigment, it’s better to sort of stipple it on with the sponge. It also sets slowly, so at application it’s very, very shiny and to speed up its setting time, it’s best to just apply over a powder, but a sheer layer to avoid it sticking in larger splotches. The big plus of this concealer is that no matter how much you apply, it never looks cakey and it blends seamlessly on the skin, much like the Eraser, also see how well it looks over pores, but it can crease if you apply a lot (original picture is large, click on it for a close-up). 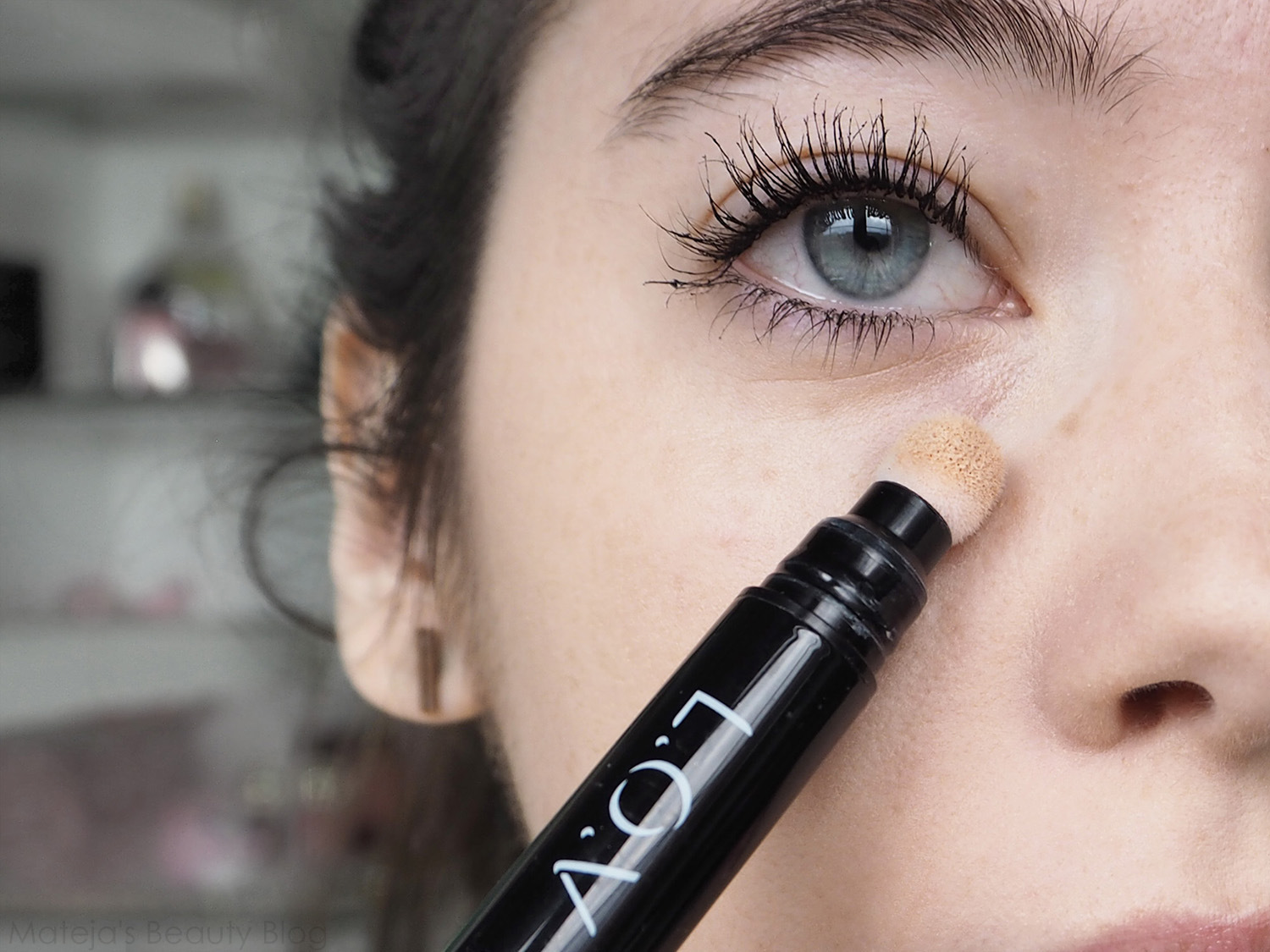 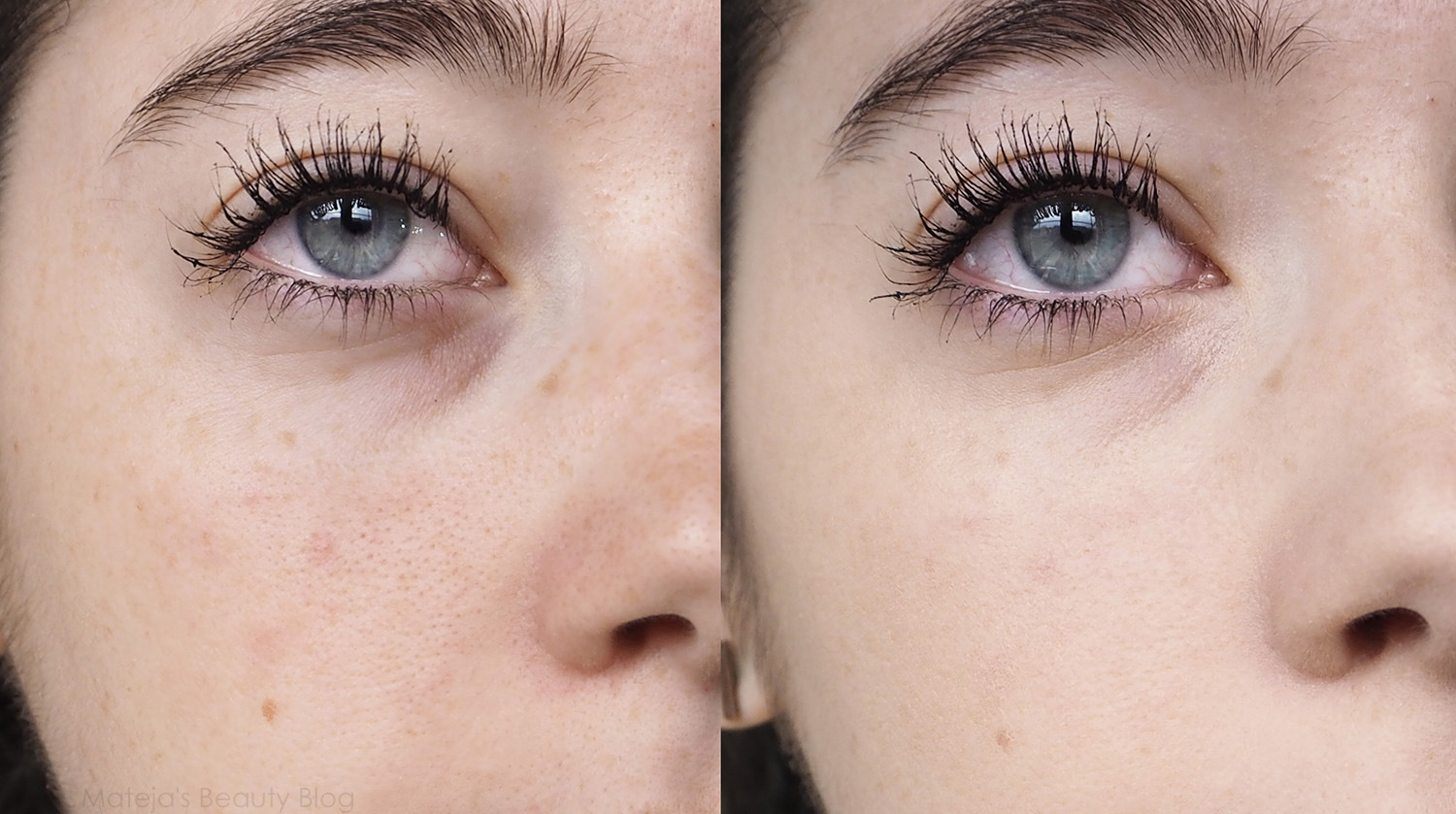 Coverage: With a simple thin coat that a few pumps of product give you, you get the lightest amount of coverage, but pumping more and applying a thicker coat gives about a medium coverage, so the darkest shadows under my eyes are still visible as you can see on my before/after. I also didn’t notice the brightening effect it mentions. When I was doing a review of Magic Lumi by L’Oreal, though I was initially disappointed by it when I saw its effects in regular conditions, I was very pleasantly surprised at how much brighter my under eye area looked on the pictures, meaning its light reflecting particles were doing its job. At Effectful, I just don’t see them working. The area is covered to a degree, but not that much brighter or fresher on my NC/W10-15 skin tone. 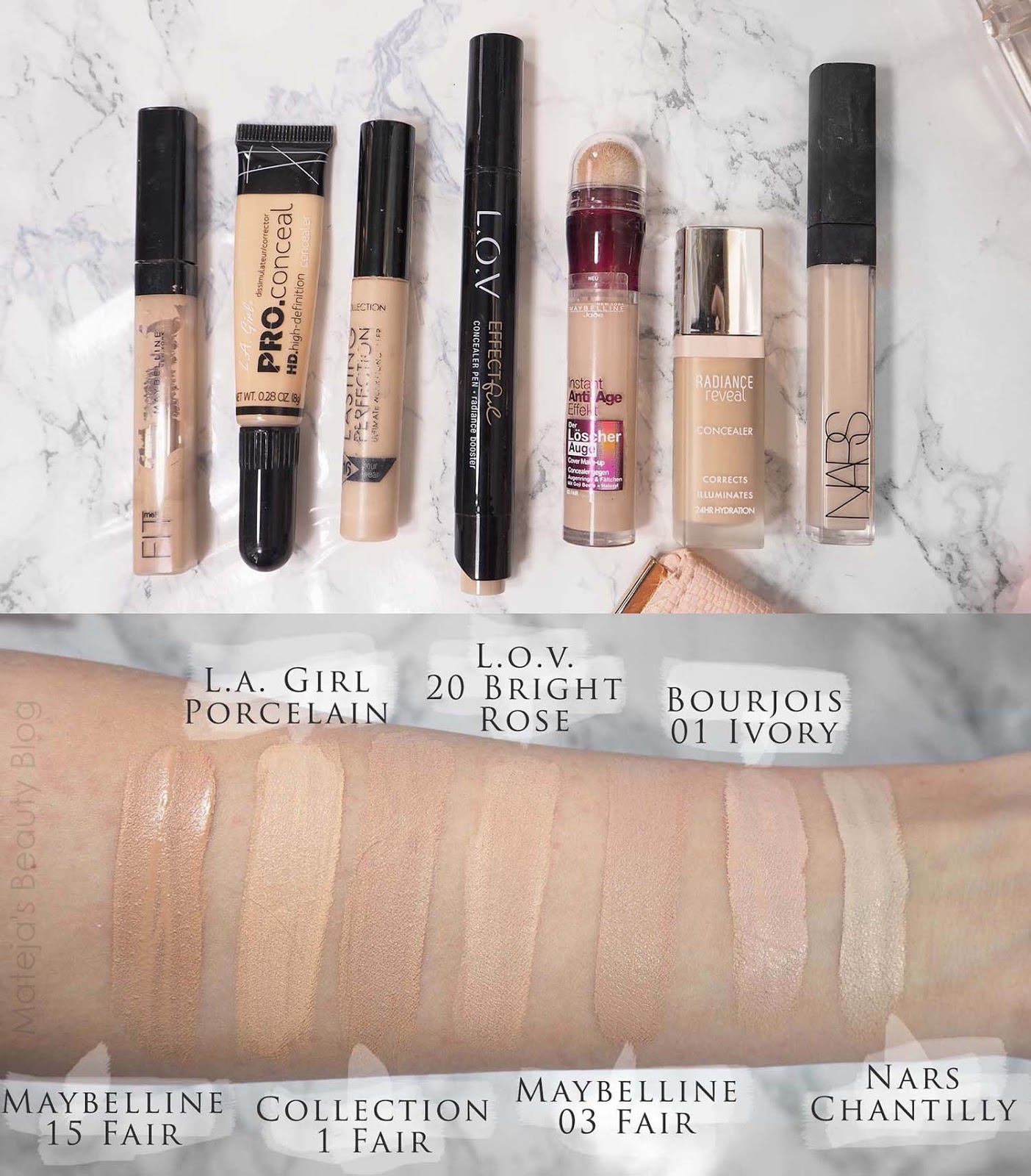 Picture taken after they oxydised for a change. Radiance Reveal completely changes undertone for some reason.
Colour: I picked shade 020 Bright Rose instead of 015 because it wasn’t as pink and it looked a bit lighter. It’s actually one of the best matches for me or maybe I just feel that way because the formula blends in so well with my skin, but it’s very pale and it easily fits NC10. I did a comparison as well: Nars Radiance Creamy Concealer Chantilly is obviously lightest, yellow toned; Bourjois Radiance Reveal 01 is a shade darker, yellow from the start, but oxidises pink; Maybelline’s Eraser 03 Fair is pink but similar, though slightly darker; Collection concealer in 1 Fair is a half a shade darker, oxidises pink; LA Girl Porcelain is very yellow-orange, but a half a shade darker and Fit me in 15 is 1-2 shades darker. 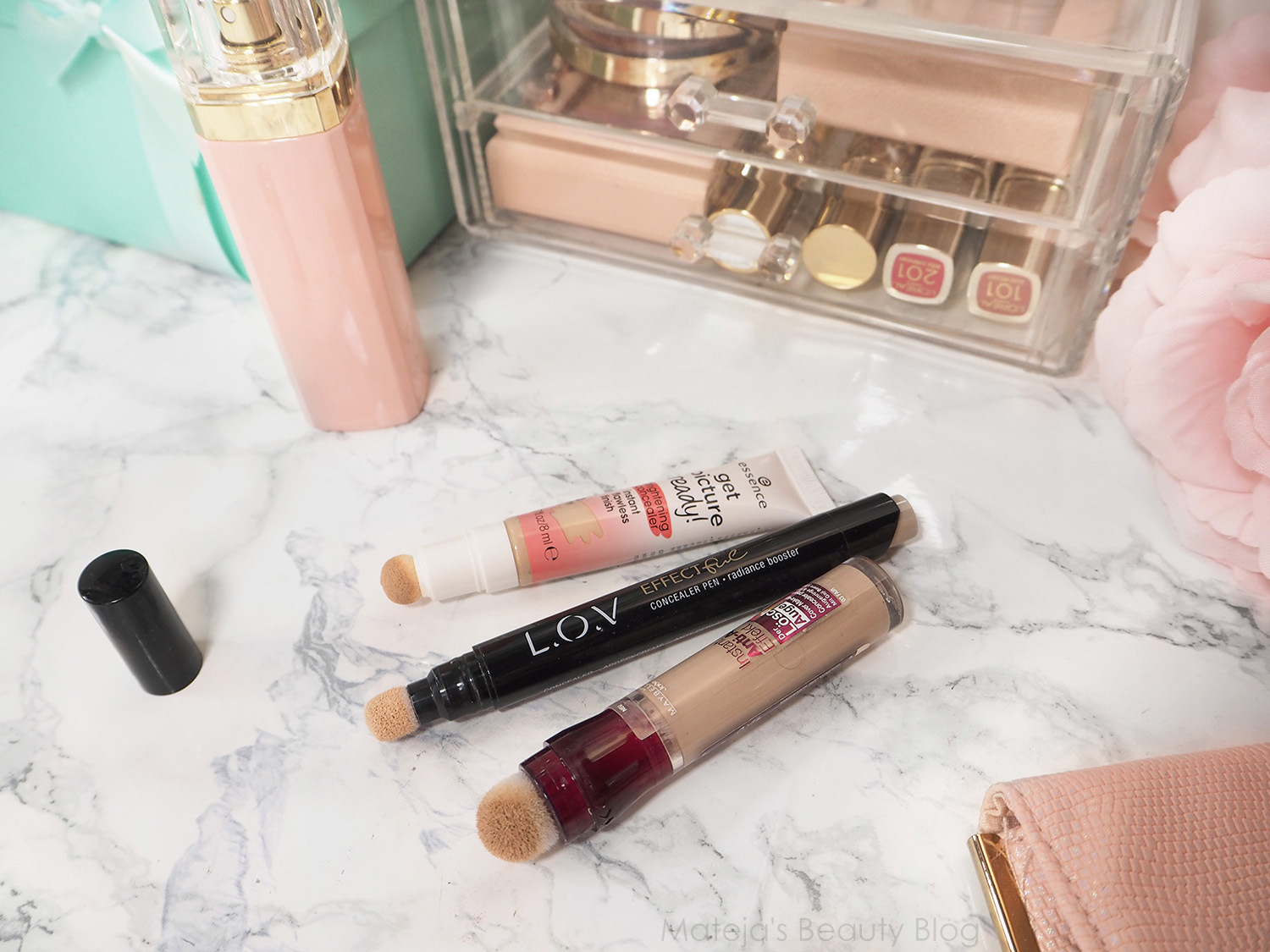 Packaging: This is my third concealer with a sponge applicator and while Maybelline’s is so handy when it comes to blending, this one is already smaller and harder, so not as pleasant to use. Using very light strokes helps blending a bit, but mostly you still need to use another method. To get the product out you need to press the button at the end several times. The packaging feels well made as I would expect for such a price.
Price and availability: I got mine in Müller for 8.99 €. 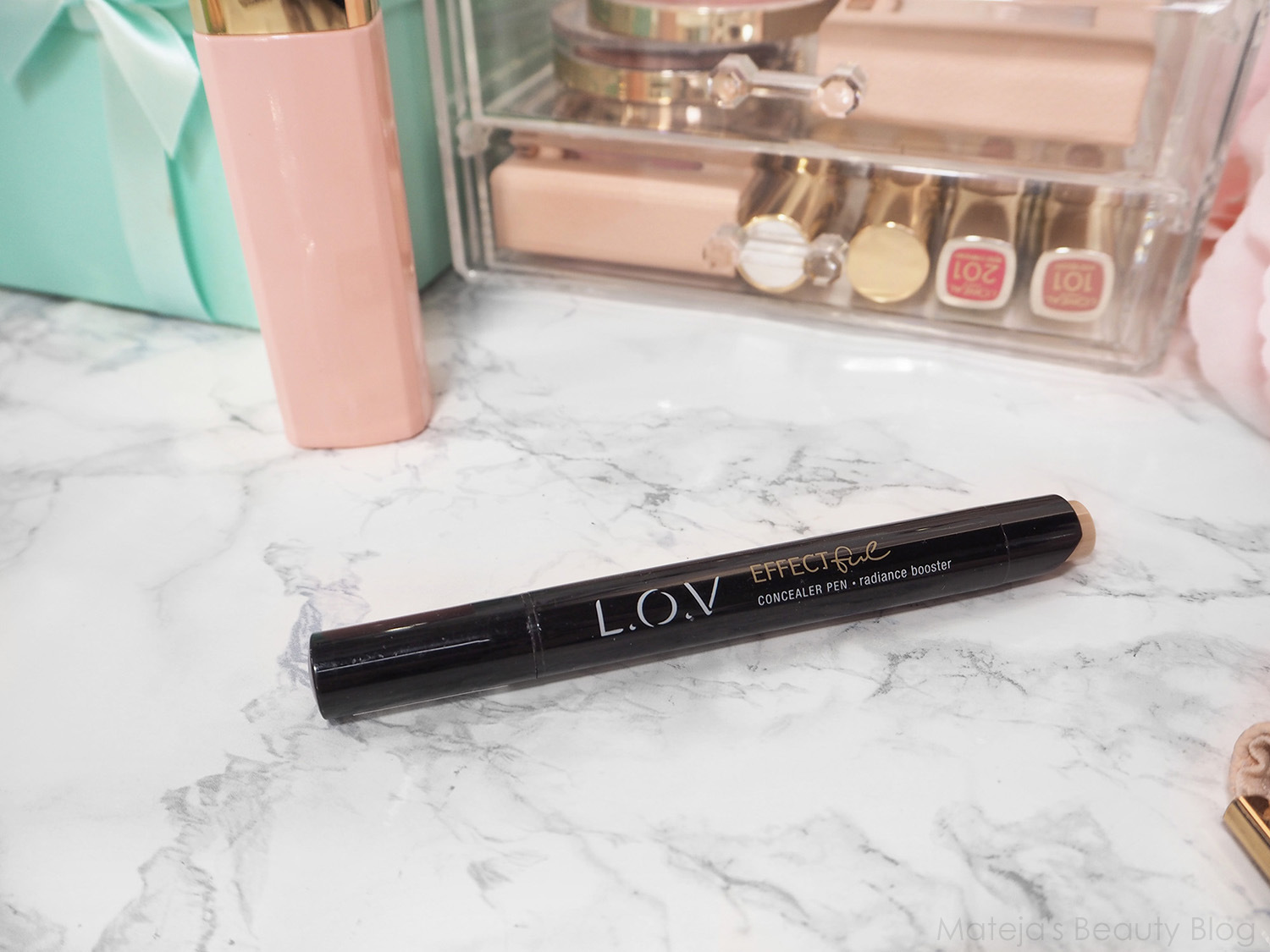 I can’t say it’s amazing, but I also don’t think it’s bad. It’s ok, but not what it promises and I feel that a lot of people will be very disappointed by the coverage, even though it clearly states it’s a radiance concealer and doesn’t make claims of high coverage. Regardless it somewhat fails at the radiance claim, while it will brighten the area if you have a darker skin tone than NC/W10, it doesn’t have the reflective particles like Magic Lumi by L’Oreal and considering I paid a lot for it, I can help feeling a bit disappointed. The sponge also isn’t as comfortable to use, nor as good at blending as Maybelline’s the Eraser. But I will say that I love the shade and how invisible it looks on the skin, so I will definitely continue using it.
Have a great day!