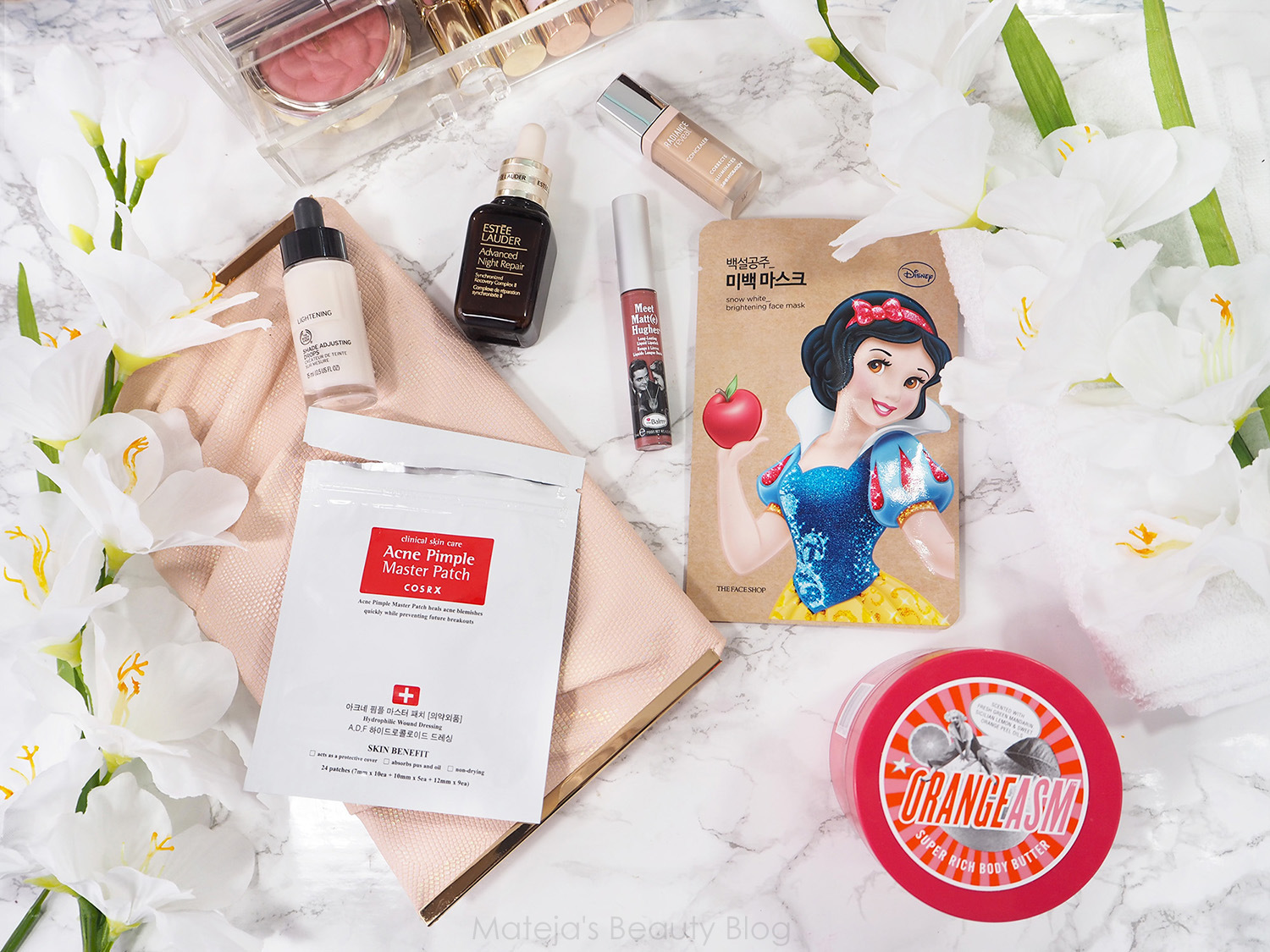 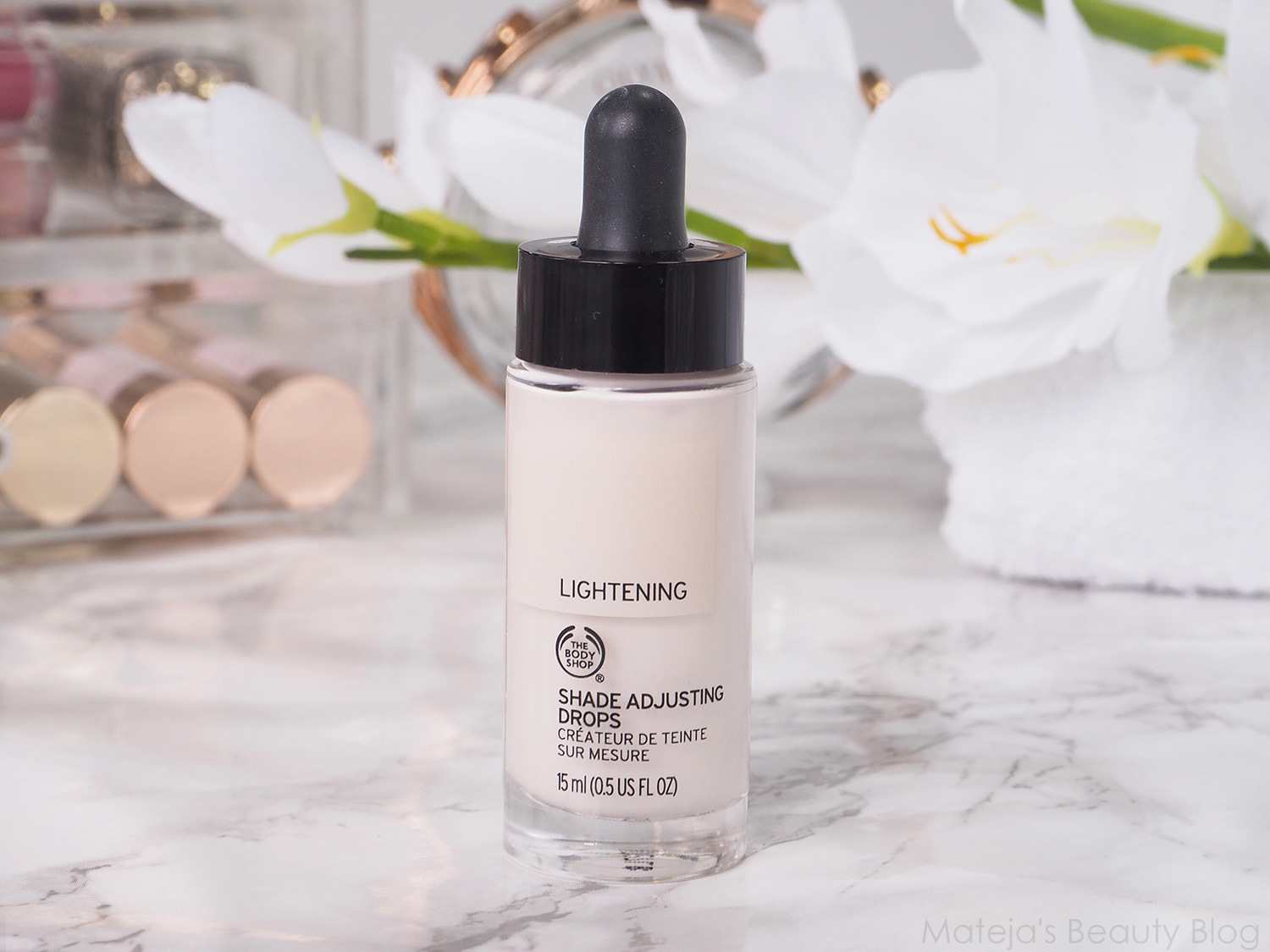 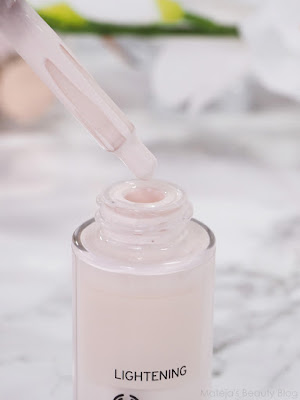 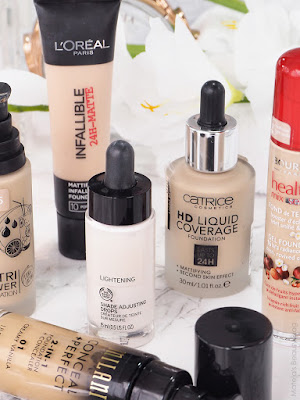 THE BODY SHOP Adjusting Drops
Lightening
Finally, something that’s actually works great at making the foundation shade lighter. As someone whose skin tone can be described as milky, I struggle to find a shade match for me, but finding a great shade and a great formula is even more difficult – though I have some, they have just a bit more coverage than what I like for every day. These drops work with every foundation I own. They can lighten considerably, but at the same time don’t mess with the texture, finish or staying power of the foundation. There is a slight pinky undertone present which suits me so well because I have a neutral undertone and most my dark foundations are too yellow, so this also neutralises them. The only complaint I have – it is big, though – is the packaging, which makes these hard to use, but I manage. 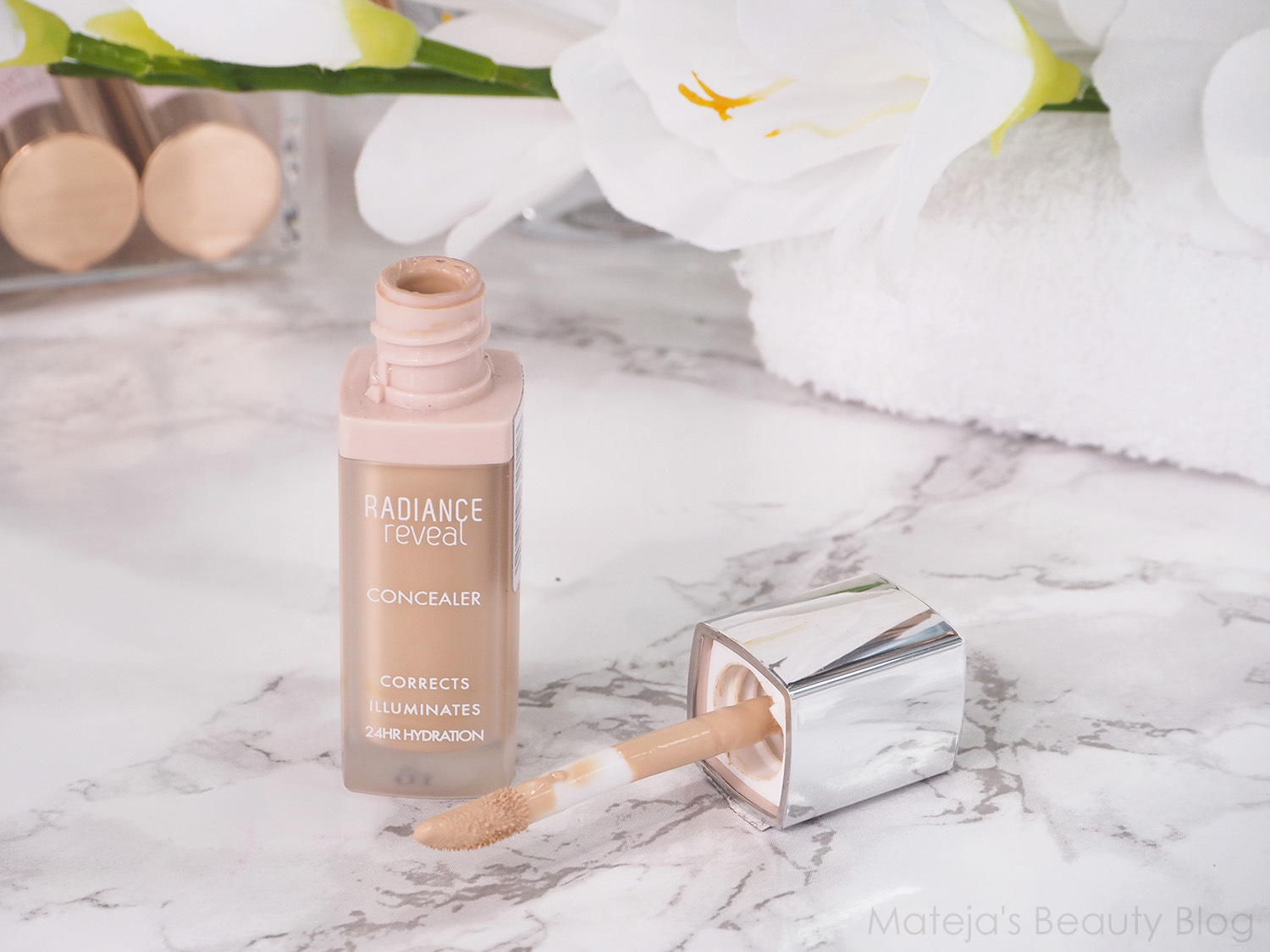 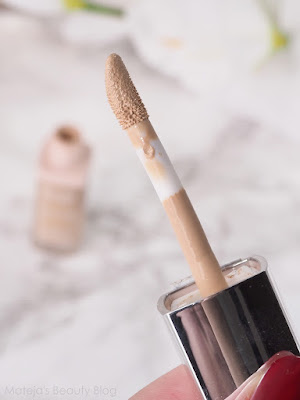 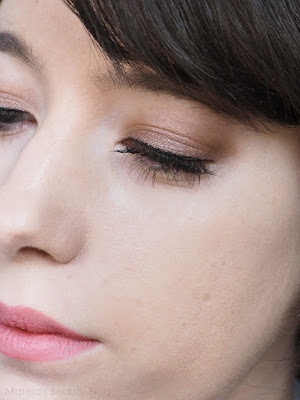 BOURJOIS Radiance Reveal Concealer
Like always it’s only when you’re trying to use things up or trying new products that you get that “wow feeling” as soon as you return to your all-time favourites. I needed to put this one aside for a while because my Collection and Nars concealer where getting old and I needed to use them up, but this is seriously such a brilliant concealer. It looks so much more natural than others, it never looks heavy or cakey on the skin, but it covers enough for my needs – I’ve never been a fan of porcelain doll perfect skin effect anyway, I want my skin to like like skin. It also smells so nice. 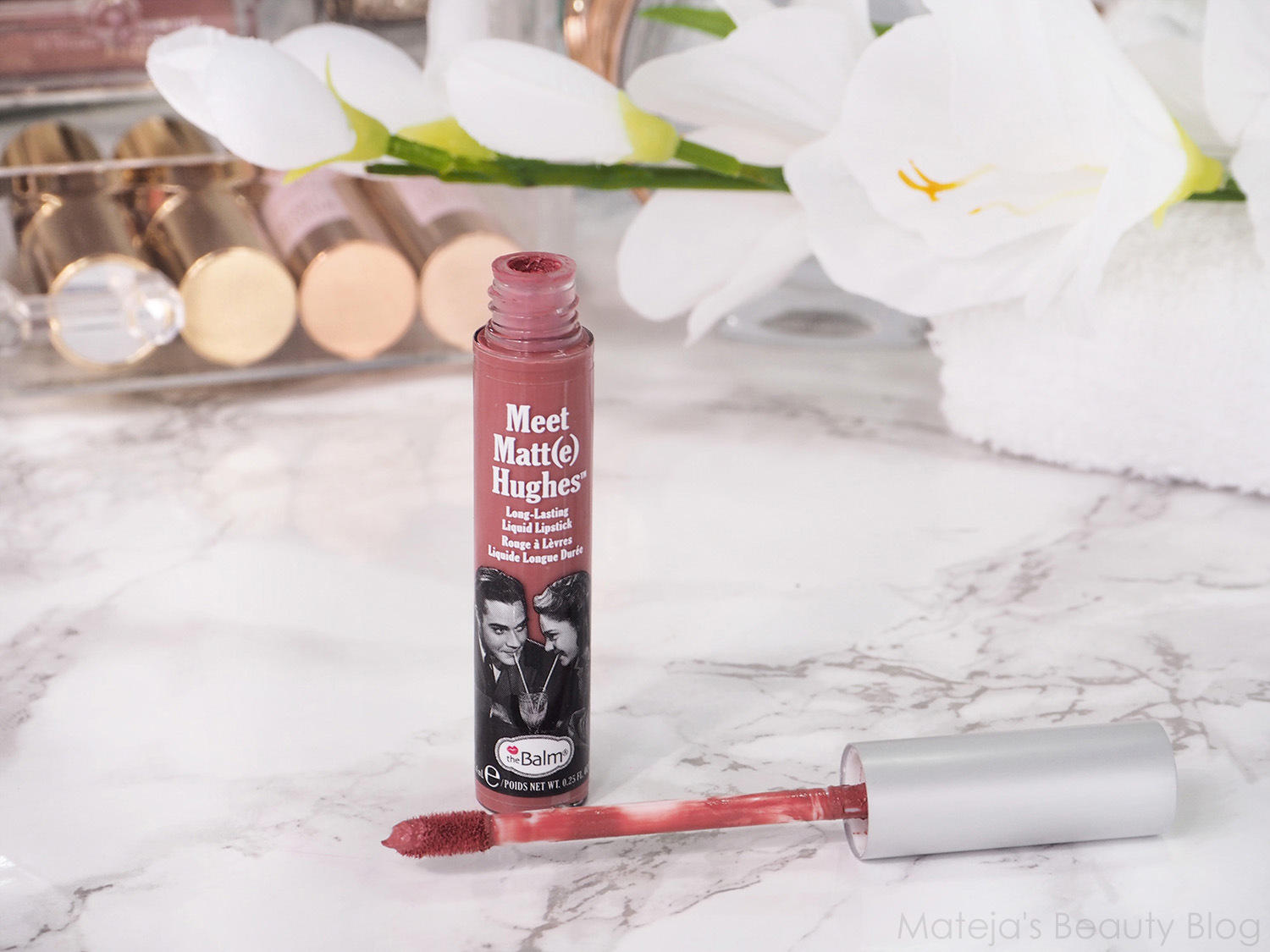 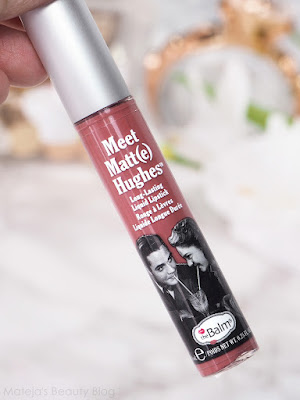 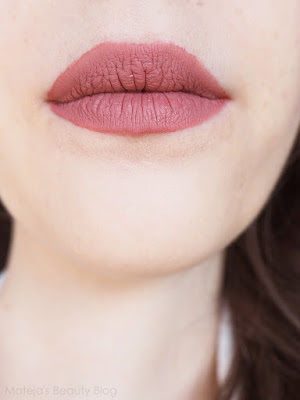 THEBALM Meet Matte Hughes
Committed
I’m in the midst of preparing a My favourite lipsticks post and this is of course in it. It’s one of the shades that I just grab without thinking because it always looks good, it lasts well, isn’t drying on my lips and is easy to apply. These are my favourite liquid lipsticks, but this shade in particular is my favourite because it’s an everyday muted peachy-pink nude shade that’s so much more complex than what I managed to describe it as. I have my eye on shade Sincere which I think might be similar but less warm. 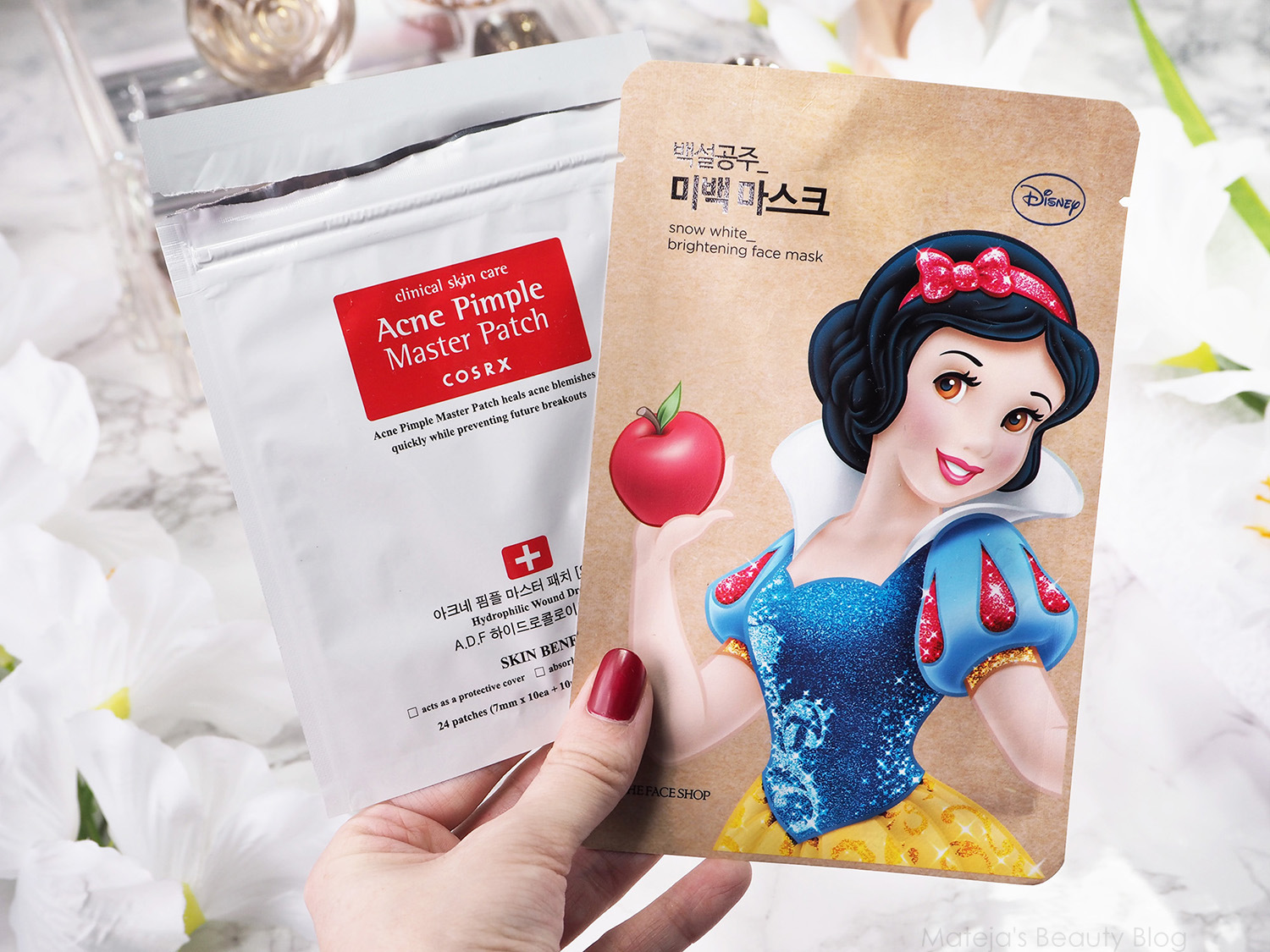 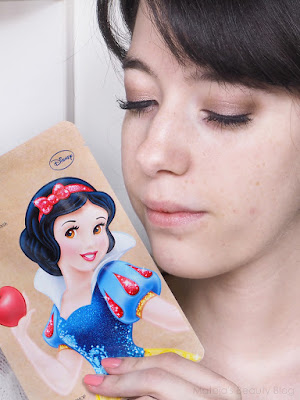 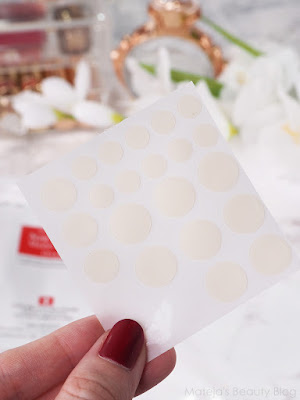 THE FACE SHOP Disney Snow White Brightening Face Mask Pack
I swear my skin just changed from the day I used this. I’ve been having a “lame skin year(s)” because I do what I always do and don’t repurchase my favourites, since they are too expensive, aside from being sent PR products that aren’t chosen with my careful and lengthy research, so my skin just always looked wrong and every foundation started to look bad too. This acted like a sort of a reset button. It’s like the condition of my skin shifted back to how well it looked two years ago, though not perfect, but much better than in the last year. This mask is a limited edition version, but it’s still available on eBay, Tester Korea,…. It’s a described as a brightening mask and among ingredients is nianciamide which should be able to do just that. Also included is pearl powder, which I’m not sure if there is any science behind its effects. The fit of it is nice, especially around the eyes, the essence was kind of slimy, but my skin absorbed almost everything and there was no sticky feeling left behind. By the morning my skin was dry to the touch. My skin was left baby soft, it hasn’t felt that way in years, it was completely hydrated, my foundation applied so much nicer that day and my skin looked more healthy, even my circles looked less red than usual, but it didn’t help my skin tone look that more even and my old blemish mark as well as freckles looked the same. I loved the effects a lot, it’s much better than other masks I’ve used so far (which aren’t many: Innisfree, Balea, Mooya and Intelligent Skin Therapy).
Since it’s a LE, I checked what other TFS mask is similar and I think it’s their Solutions Brightening, but it has a lot of alcohol.
COSRX Acne Pimple Master Patch
I’m a bit angry that I didn’t know about these for so long because I’ve been without an effective spot treatment since Essence stupidly decided to discontinue their double roll-on treatment many years ago and replaced it with that Ediks looking crap. I threw away several products from other brands because they didn’t do anything, but these pathces actually work. Finally something! They are packed like you’re buying some vitally important medical equipment – seriously this has like four layers of plastic and you get 24 patches in various sizes. You know that time of the month is not complete without a volcano erupting somewhere on your face, with me is always on my chin and it’s one of those that just won’t go away for a week and it leaves a blemish mark from hell that won’t go away for a year, which in the constant cycle means never. This patch made it smaller by 90% overnight, it really does pull out all most of the nastiness, but the spot completely disappeared in the next days with the help of other COSRX products. So far these are most effective spot treatment I’ve tried. Completely worth picking these up. 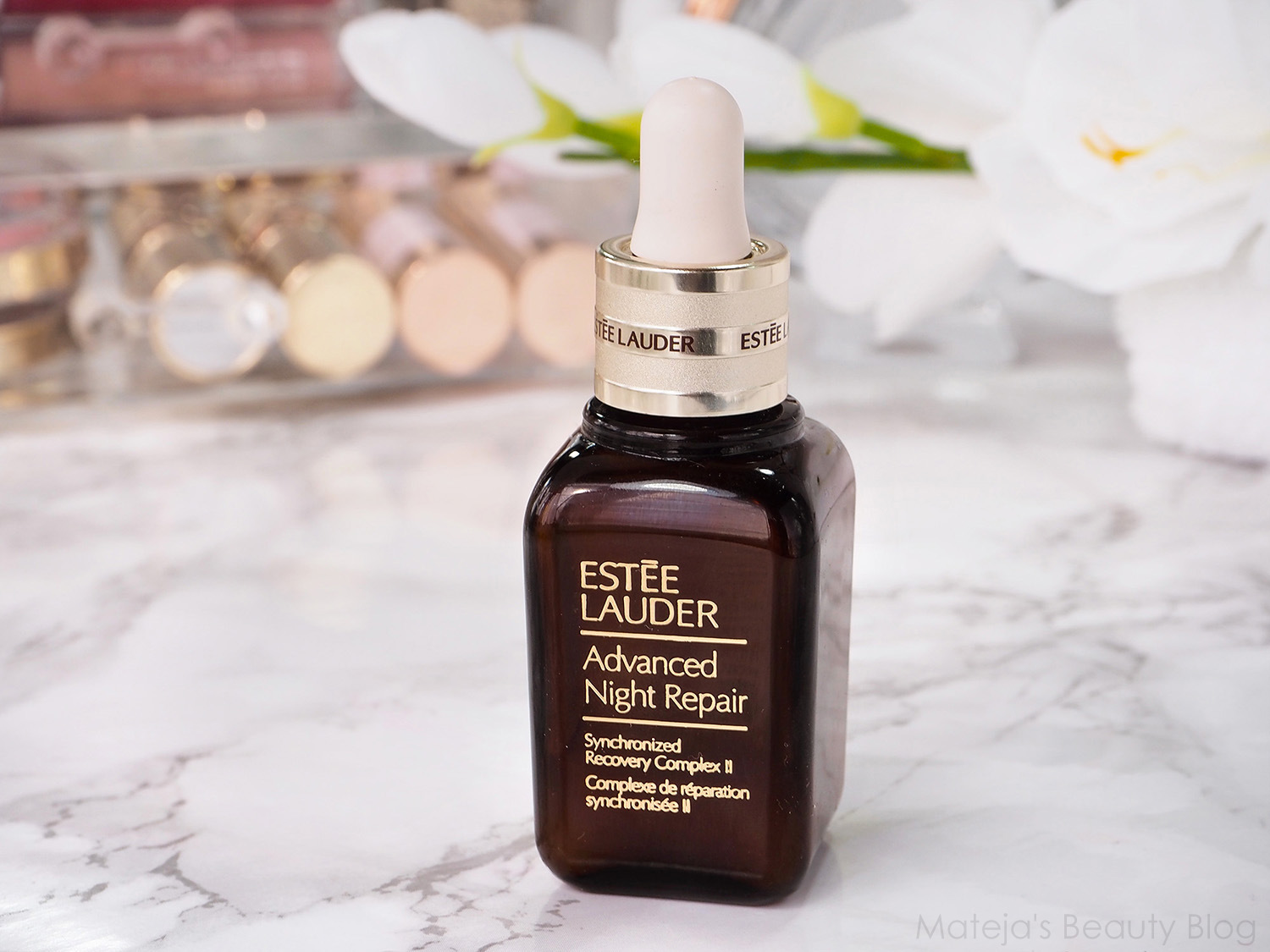 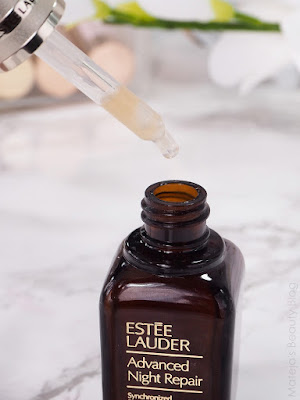 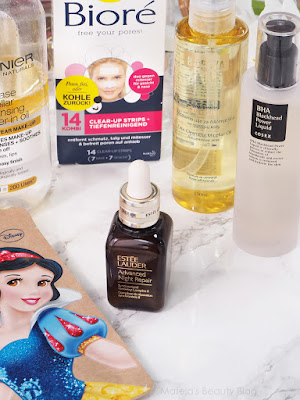 ESTEE LAUDER Advanced Night Repair Synchronised Recovery Complex II
I’ve actually had this since spring last year and I’ve stupidly been using it sporadically because it’s very expensive and I wanted to save it. Big mistake! Of course I didn’t see results that way and I started blaming it on the revamped formula. Yeah, I’m often wrong. But since it’s already almost a year old, I finally started using it every day without fail and combined with the before mentioned TFS mask and  COSRX BHA Blackhead Liquid that I’m using every three days, my skin completely transformed. It’s just better in every respect. It looks less congested, it’s smoother, softer and less “blah” looking. The only problem left is that it’s dry and it still lacks elasticity. As I said it’s expensive and it’s not that I can’t afford a new bottle, it’s more that I’m a terrible miser and I find it slightly insulting when someone charges me a lot for a product that is used up in a few months, so I might try its dupe Missha’s Time Revolution Ampoule (or when I finally realise my mistake, cave and buy this again). 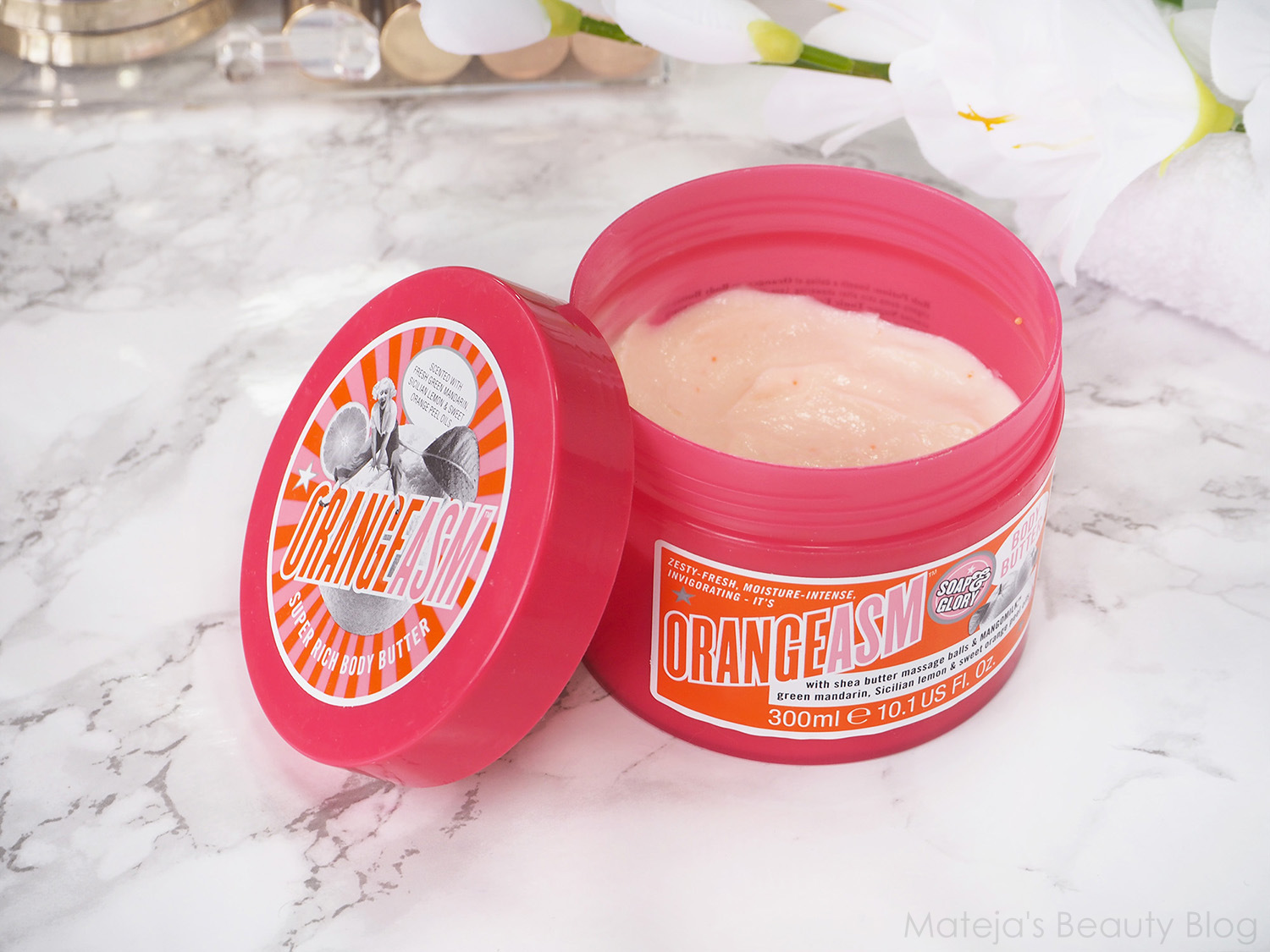 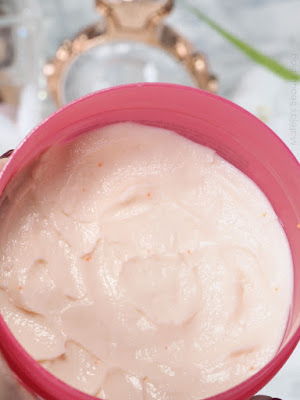 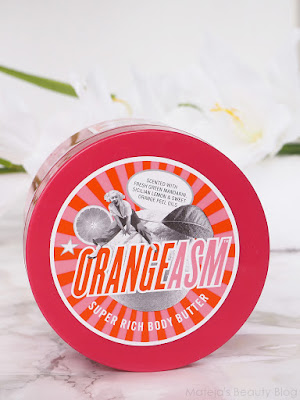 SOAP & GLORY Orangeasm Body Butter
This already landed in my favourites and I’m still enjoying using it a lot, since my skin is currently very dry. It’s such a lovely body moisturiser that’s nourishing, but not too thick and actually most of it sinks in quite fast, so you don’t feel all greasy before going to bed. I’m also loving the scent more and more. It’s a lemon citrusy scent, but not that classic zesty cosmetic scent, it’s much more natural and bitter fresh. It contains some bright coral beads that contain shea butter which makes it a bit more special. 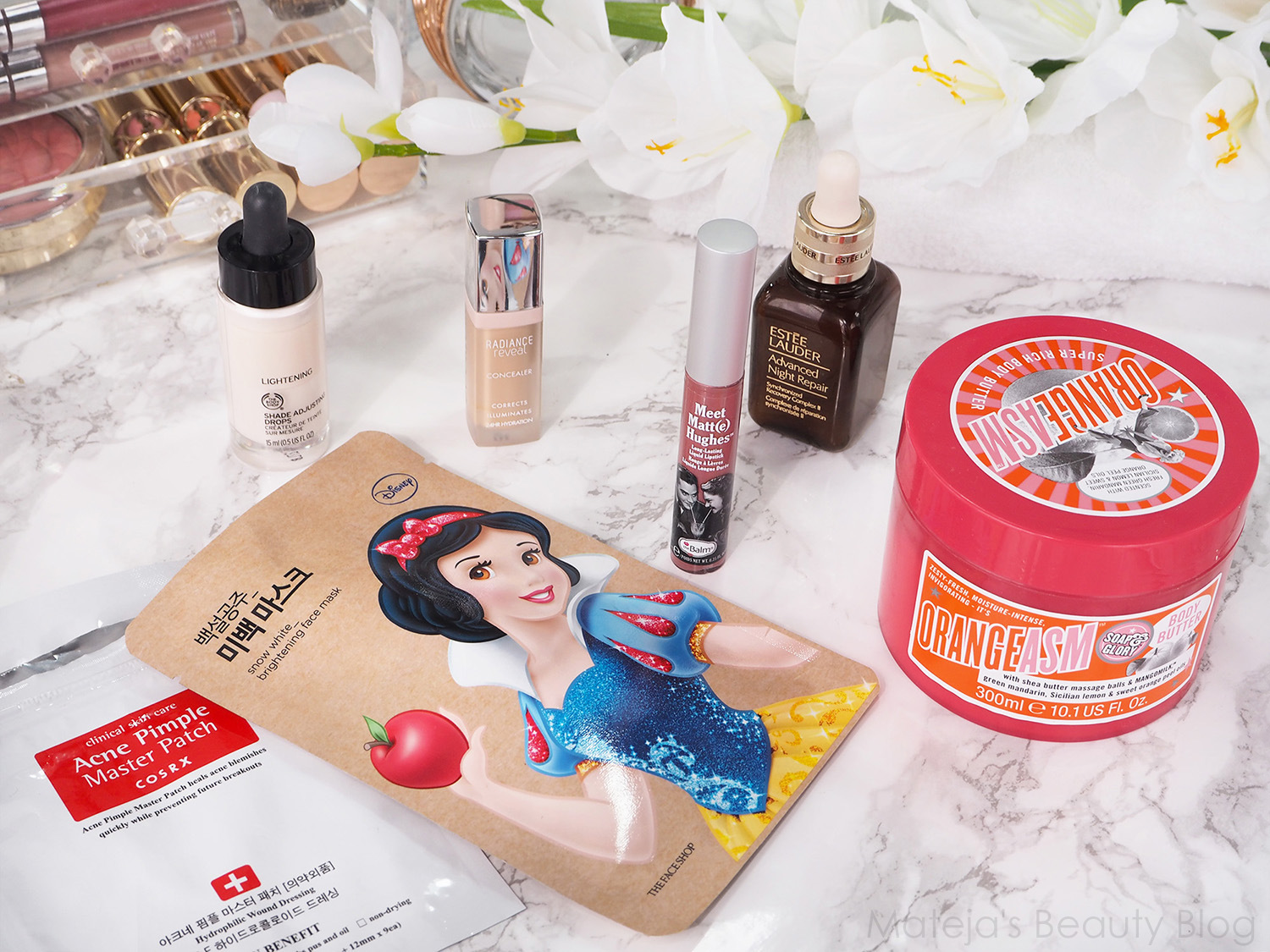