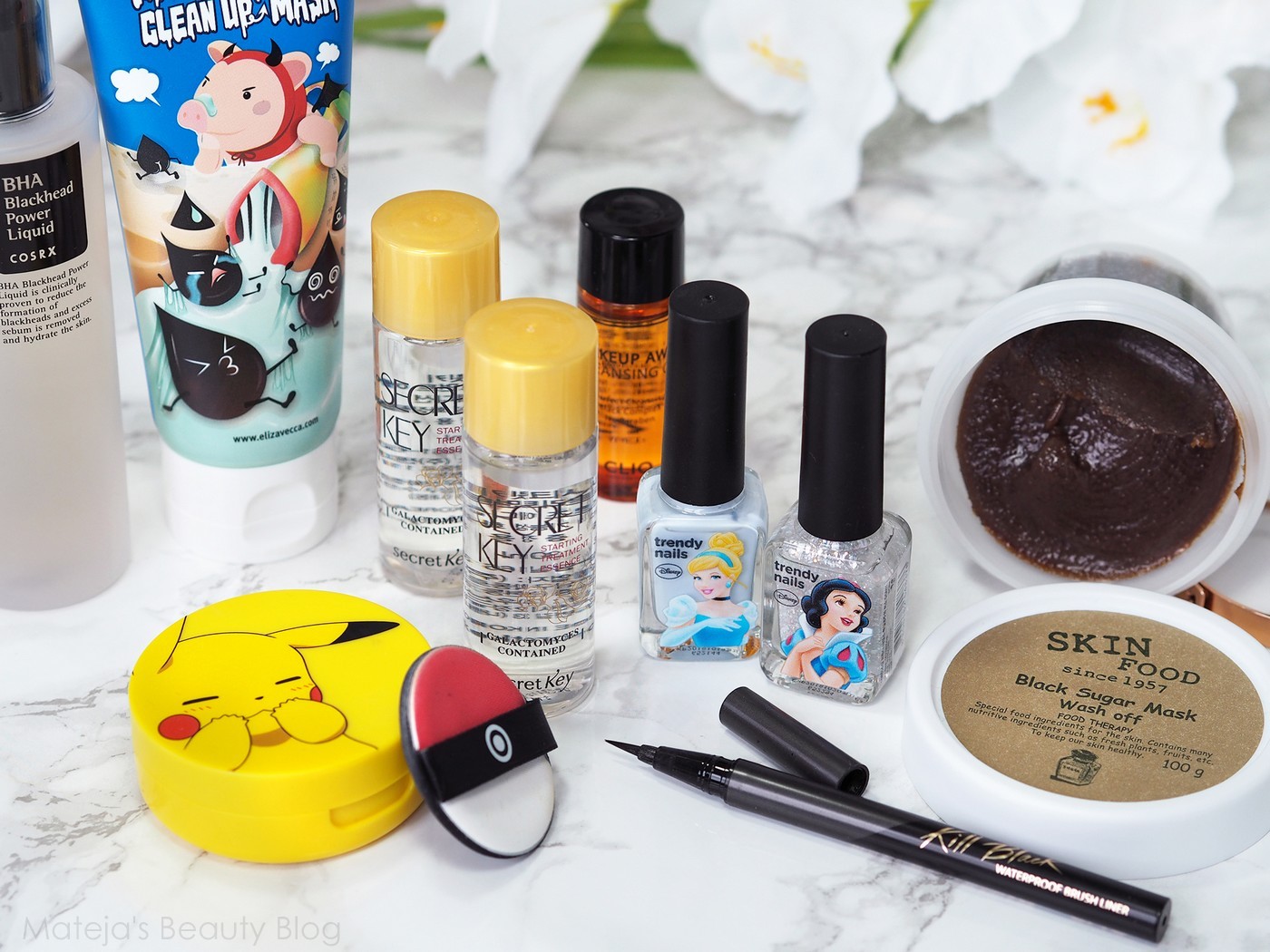 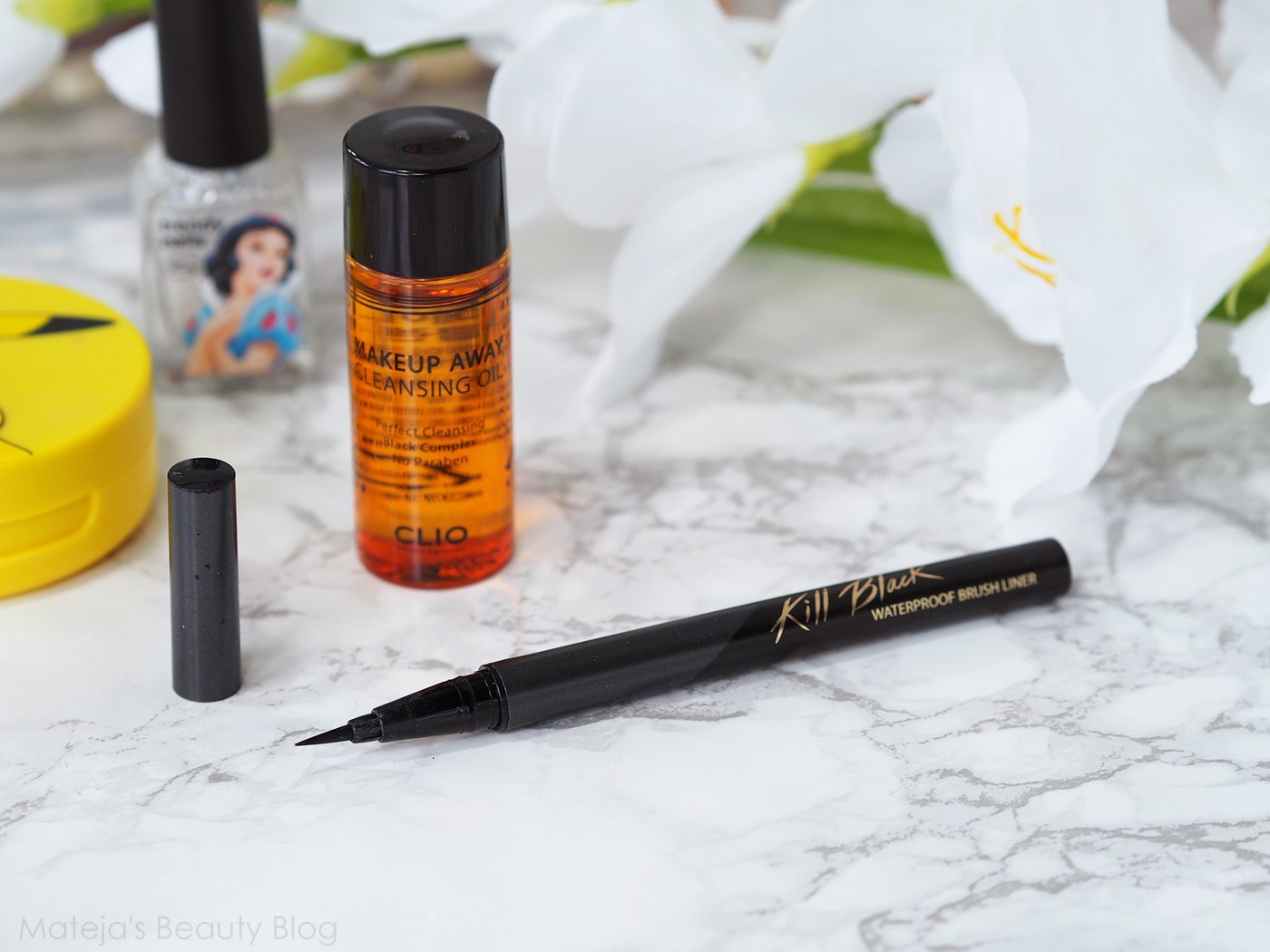 CLIO Waterproof Brush Liner
Kill Black
I got this after both Petra and Nadja raved about it, plus I loved the shape of the applicator since experience has taught me, these types are the best. Like at Artdeco I’m having problems with this having a dry tip. I can draw the main line and it’s inky black, but it suddenly just dries up. It’s like it comes in contact with something that coats the tip and prevents the product from coming out, but I’ve tried it on completely clean skin the first time and even from the start I wasn’t happy. Maybe the problem is my skin, I don’t know. I then have to draw a bit on the back of my hand to revive it and it’s fine. The formula is lovely, black and long-lasting, but I’m really not a fan of it just drying so often. I’ve been using it for almost three months now and I just expected more. After two months of using it every day and hoping it’ll finally start working normally, I just bought a Maybelline one, which works normally on me.
You get a cleansing oil with it which is a bit thin for my liking, but works fine in removing the liner.
eBay, $10.06 (ordered from seller picknsale, arrived in 20 days to Slovenia) 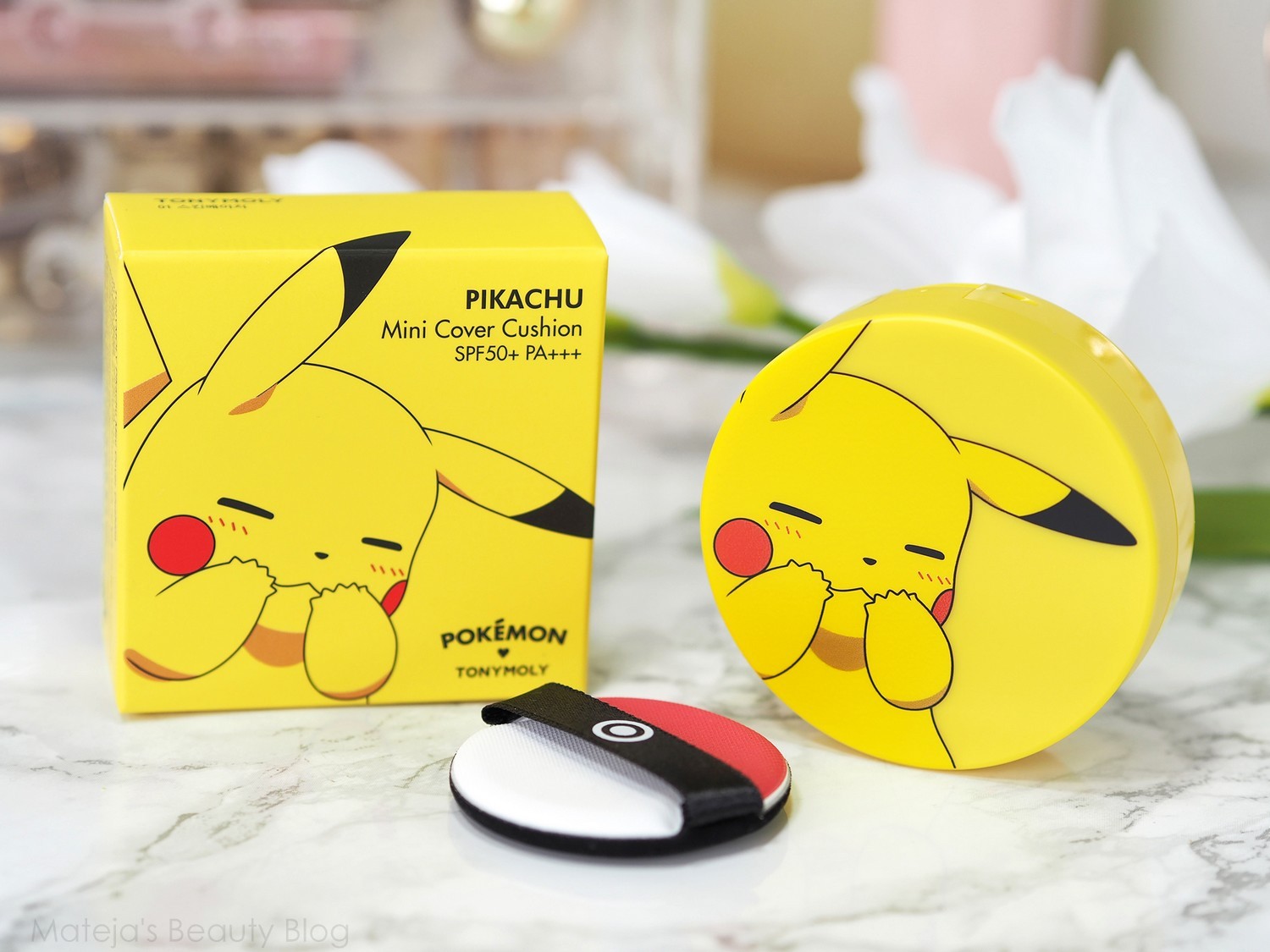 TONYMOLY Pikachu Mini Cover Cushion
01 Skin Beige
I’ve already done a review about this one with all the comparison swatches and before/after pictures. It’s my very first cushion foundation and I fell in love with the concept, despite knowing that the amount of product I’ll be able to squeeze out of the sponge will be much, much smaller than buying a regular foundation. This one is a limited edition version, but it’s still available in some places. It’s got a light to medium coverage if you layer it, which is very easy with this one and it has a very dewy finish, so if you have oily or combination-oily skin, you should skip this one. The shade is lovely for me, a nice pale one with a pink undertone. Of course I got it for the packaging, which is so adorable and the pokeball sponge applicator is such a cute touch. The latter is best thing because it just works so well and with any foundation. As I said it’s super shiny and staying power leaves something to be desired, nonetheless, I’m happy I got it and I’d like to find some other cushion foundation, maybe with a more matte-satin finish and in a similar shade (my research led me to Innisfree Long-Wear Cushion and Etude House Precious Mineral Any Cushion). 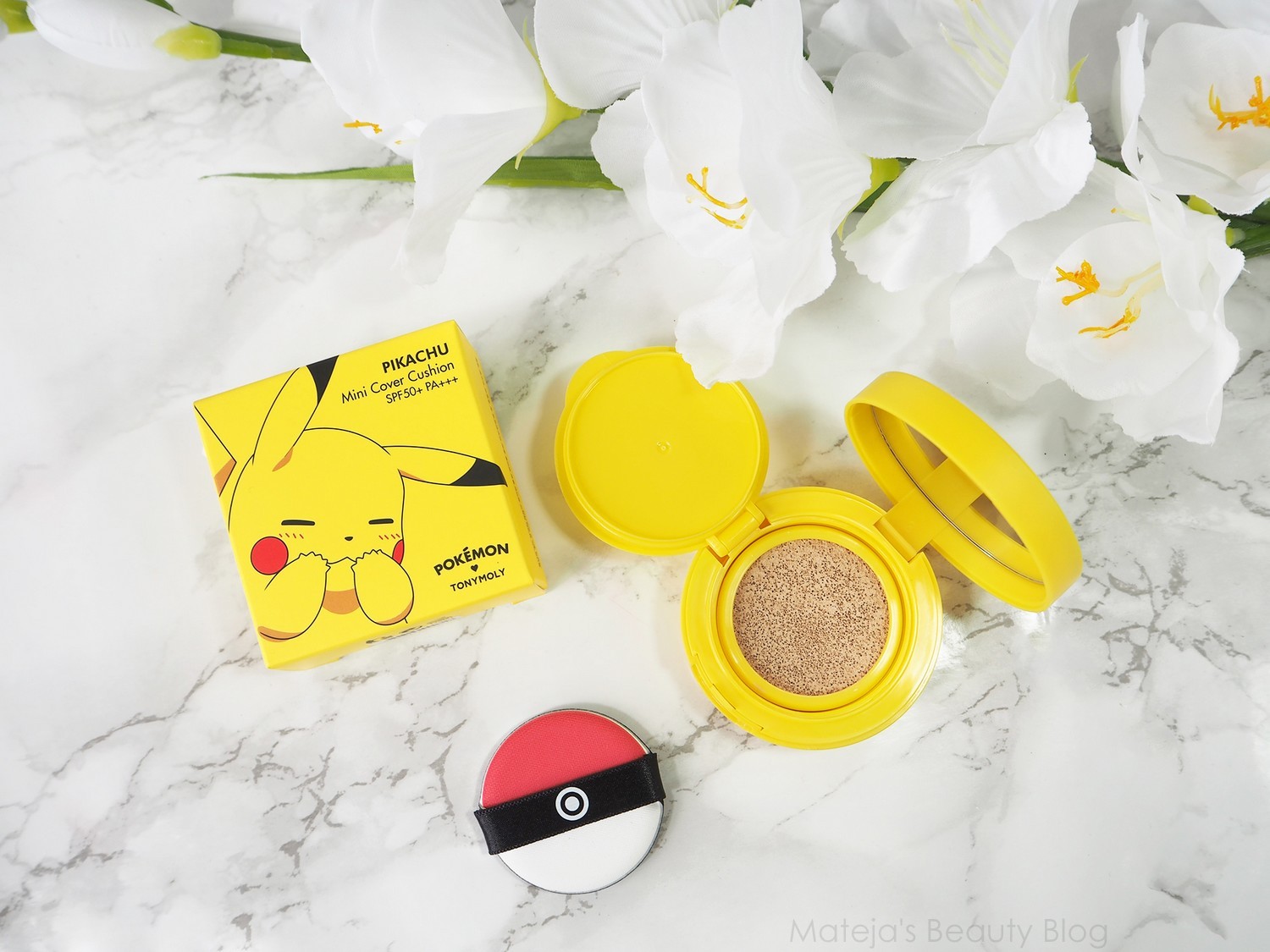 I ordered this first from eBay in January for my birthday, but the parcel got lost and after two months I ordered it again, but this time from TesterKorea (9.22 €), which I again had to wait for a month to arrive (35 days). In the strangest turn of events, the first parcel arrived after three months (97 days, shop BringBringShop which is the same thing as RoseRoseShop. All three parcels I ordered from them took super long to arrive. I understand one, but three ordered weeks apart can’t be a sign of a good practice), so I now have two and I decided to give one away. Giveaway is at the end of the post (Slovene residents only. Sorry shipping to other countries is too expensive) 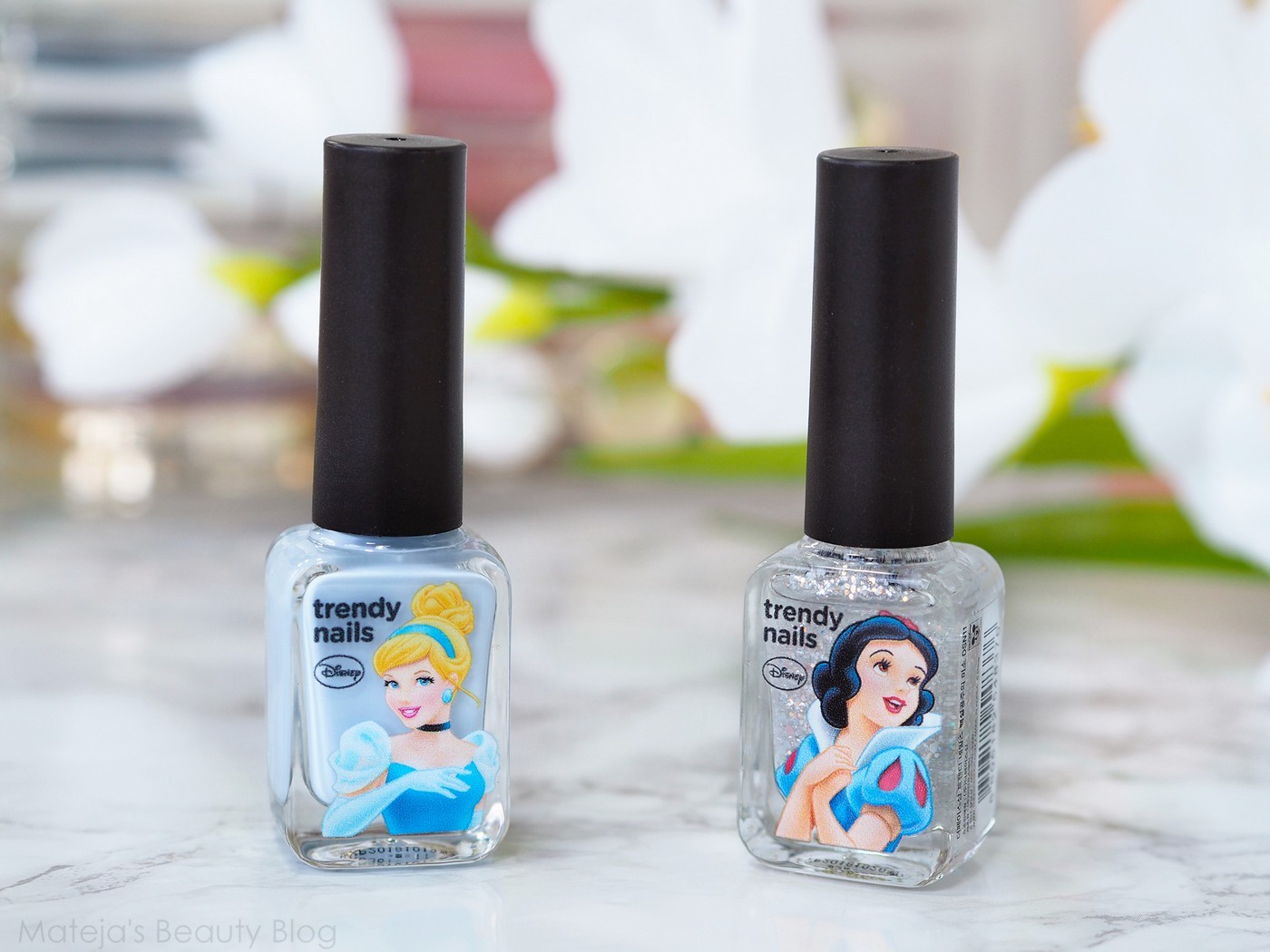 THE FACE SHOP Trendy Nails Disney Princess Edition
Snow White and Cinderella
I just had to get these, Snow White without a question, but I got Cinderella for the actual colour. Don’t think these two colour are available any more, but you might still find them on eBay. The quality really isn’t that good, so you’re not missing much. But there are plenty more TFS Disney products. 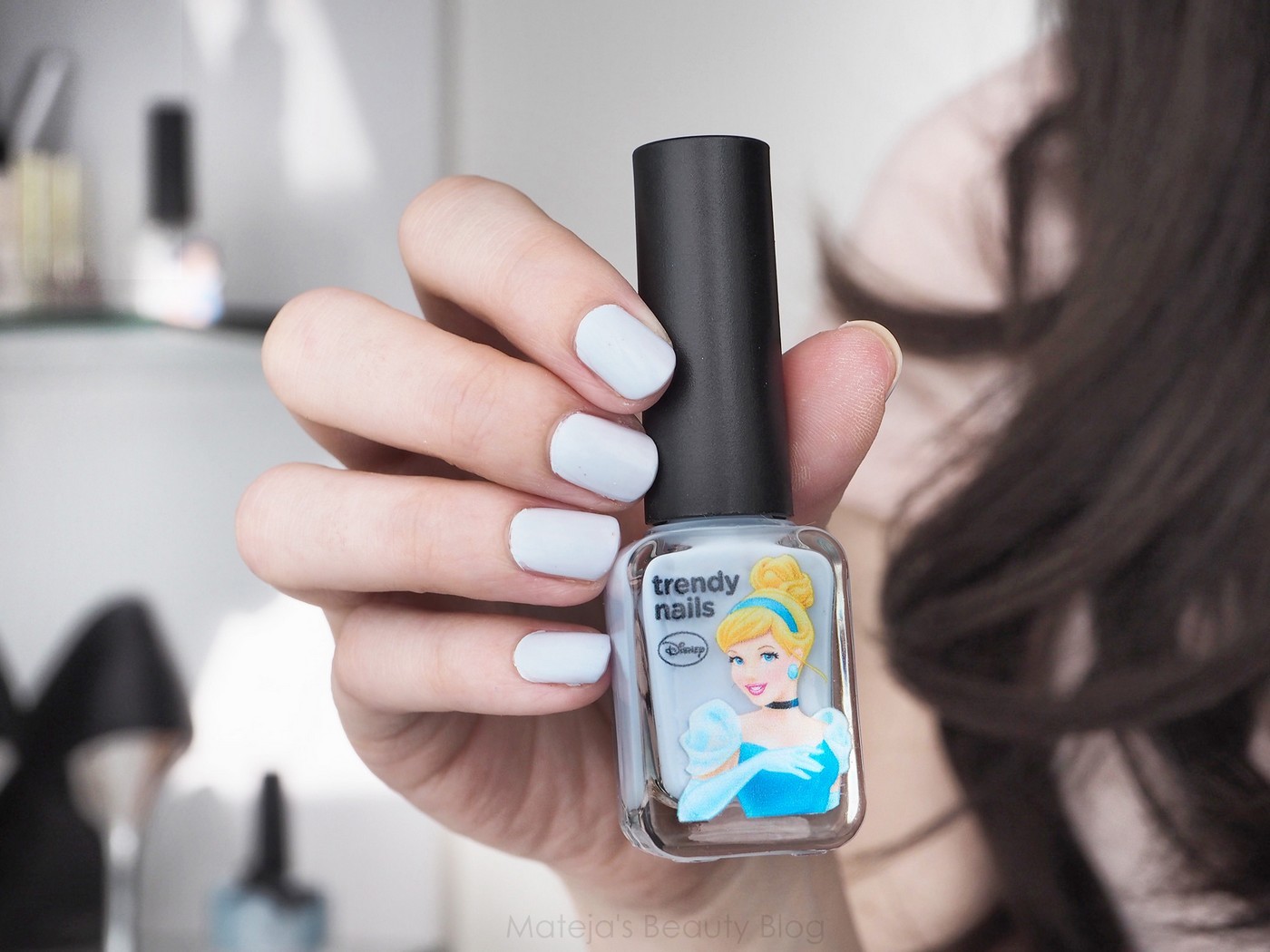 Cinderella is a pastel blue shade and I love it, but the formula is beyond annoying. It’s the “good”, old classic pastel that never looks even, is thick and needs at least three coats. Basically the application is a nightmare. 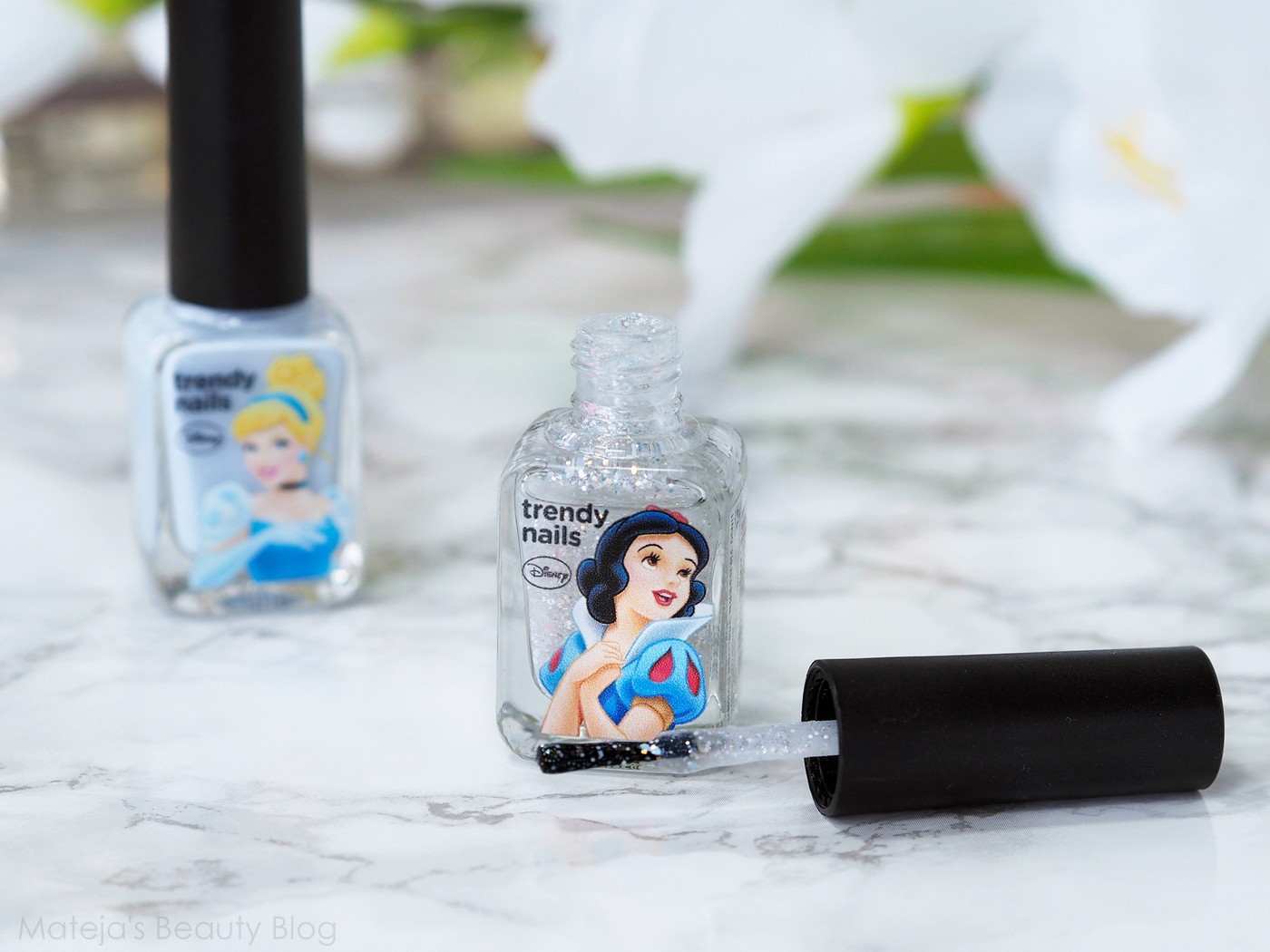 Snow White is a snow effect shade and it contains different silver shimmers plus some white flakes. It’s lovely and easy to apply, but an absolute horror to remove, like all glitters. It’s on my nails in the next part of New in where I’m holding COSRX patches.

eBay, $4.90. Seller was cgs6309, who still has some shades and the parcel arrived in 14 days.
*
Before I start on skin care, my skin type is combination-dry and not at all sensitive. I get from visibly dry skin if I don’t care for it, to slightly oily T-zone in warmer months. Spots are rare, but again if I don’t care for it, I’ll have a couple of small ones and I know that at least mineral oil clogs my skin. I’ve already reviewed several products in my empties with opinions based on samples. 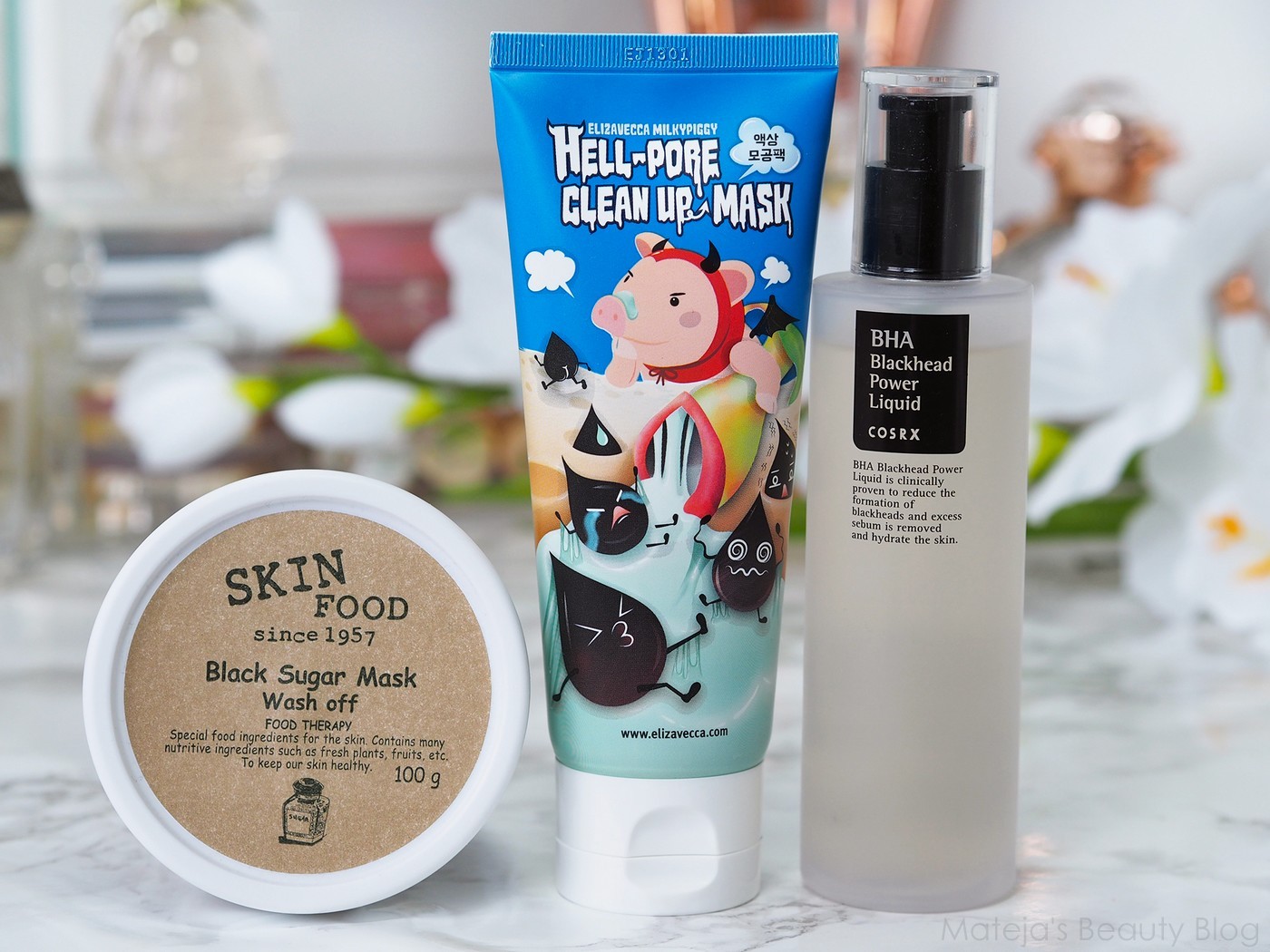 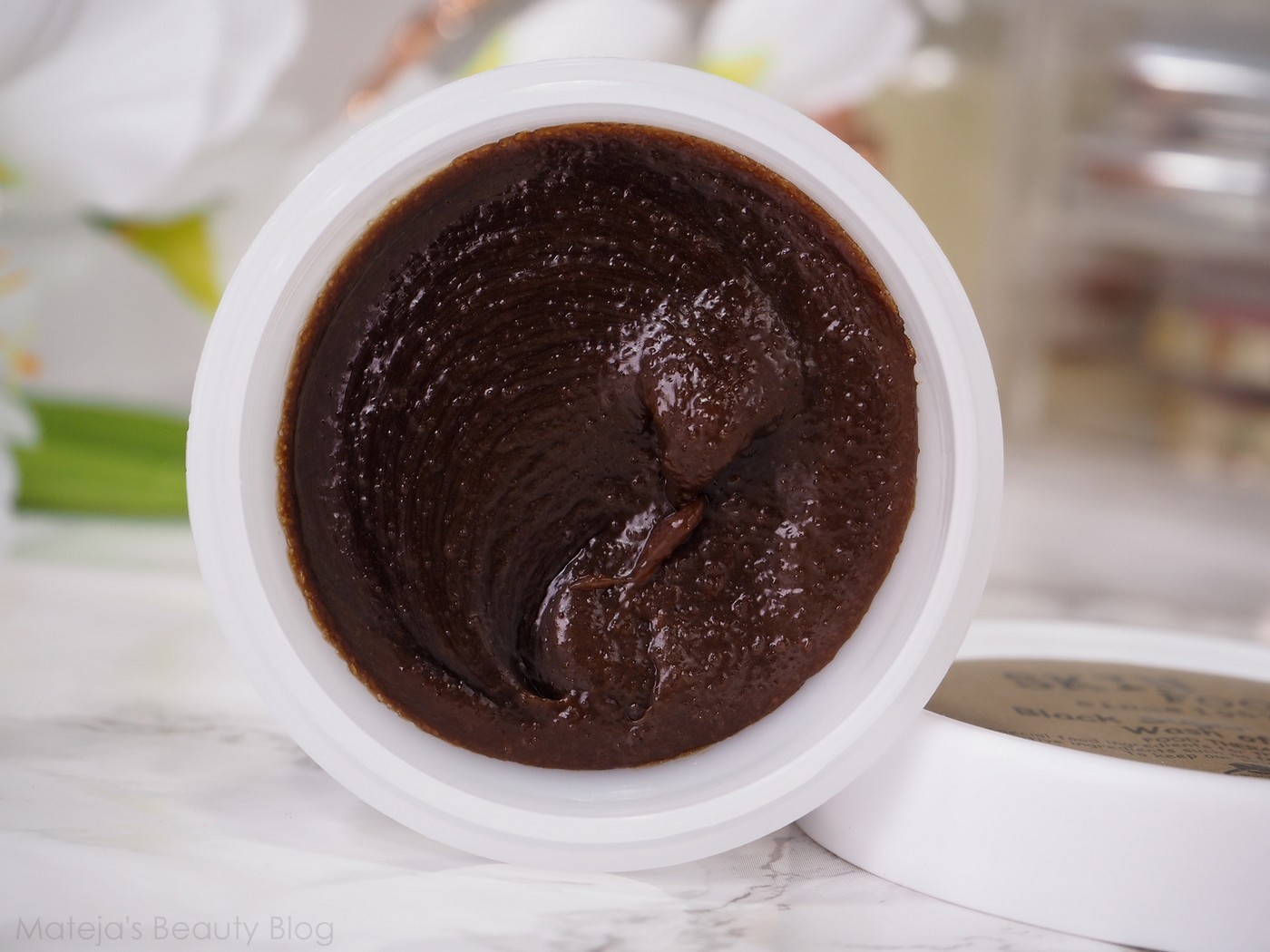 SKINFOOD Black Sugar Mask Wash off
This one of the most popular Korean skin care products and the one I heard most about, so it was on my wishlist which I posted a few months ago (and actually got most of the things to try). I originally wanted the honey version, which I still might get, but recommendations were about this one. It’s a sugar scrub, which should be all wrong for the face, but no amount of AHA’s has made my skin smooth around the nose and on my chin, so went in with the big guns. As expected this is a very harsh scrub, like sugar scrubs for the body, but this also functions as a mask that you leave on the skin for 10 minutes. The scent is strange when you use it, like lemon candy mixed with something artificial – I don’t mind it much and most people love it. My skin felt incredibly smooth after use, actually I don’t think it’s ever been so smooth. While it looked better in the morning, that incredible smoothness wasn’t there anymore, but this is still the most effective scrub I’ve found and the sides of my nose and chin look much better.
Ingredients.
Jolse, 8.60 $. It took 39 days to arrive.
ELIZAVECCA Milky Piggy Hell Pore Clean Up Mask
When it comes to pore strips, 99% of them don’t work on me and they also don’t tend to fit me well, so I end up with bubbles where nothing is removed. I’ve never been a believer in peel-off masks, but I heard some good things about this one and I was interested if Korean beauty brands are better in that department than ours. It applies like a thin clay mask which starts to drying very slowly into a plastic-like coat (it takes about 20 minutes, but I leave it a few minutes longer) and then you just pull it off like a normal peel-off mask. I really wanted to see significant results, but I find it’s way too gentle. It didn’t manage to pull much from my pores and it didn’t hurt, only on the middle of the cheeks (I’ve only applied this where the blackheads are). I’ve used it a few times and each time I end up with an almost clear strip of product, so this wasn’t the best investment. I’ve recently found we have Bioré strips in Slovenia, which of course I already bought and tried, so I can just say to you to get those, as so far those are the best I found.
eBay, $10.79. Seller nowzenith, took 17 days to arrive. CORSX BHA Blackhead Power Liquid
I had a sample of this before purchasing, though I couldn’t tell much from one sample, just that the texture seems fine and my skin started behaving a bit better in the next week, but I basically bought this based on faith that I’ll work for me just as for many others. A lot of skin care buffs are swearing by this product, apparently it’s one of the best blackhead products. It contains BHA meaning it clears out the pores and helps with spots too, but it’s relatively weak, so I feel no tingling or anything. It’s a very light liquid that feels more like a toner and it only leaves a slightly sticky layer behind. I didn’t get an actually reduction of blackheads as I hoped, but my skin has been behaving much better when I use it. For a time my skin was completely clear, my forehead was completely smooth as were most of other areas, but when I stopped using it for a while, to test other products, I saw just how much this helps. I’m very impressed. Only one minus – I can only use it every three days because it is drying.
Ingredients.
eBay, $17.85. Seller iamlove-shop (Jolse on eBay), took 17 days. 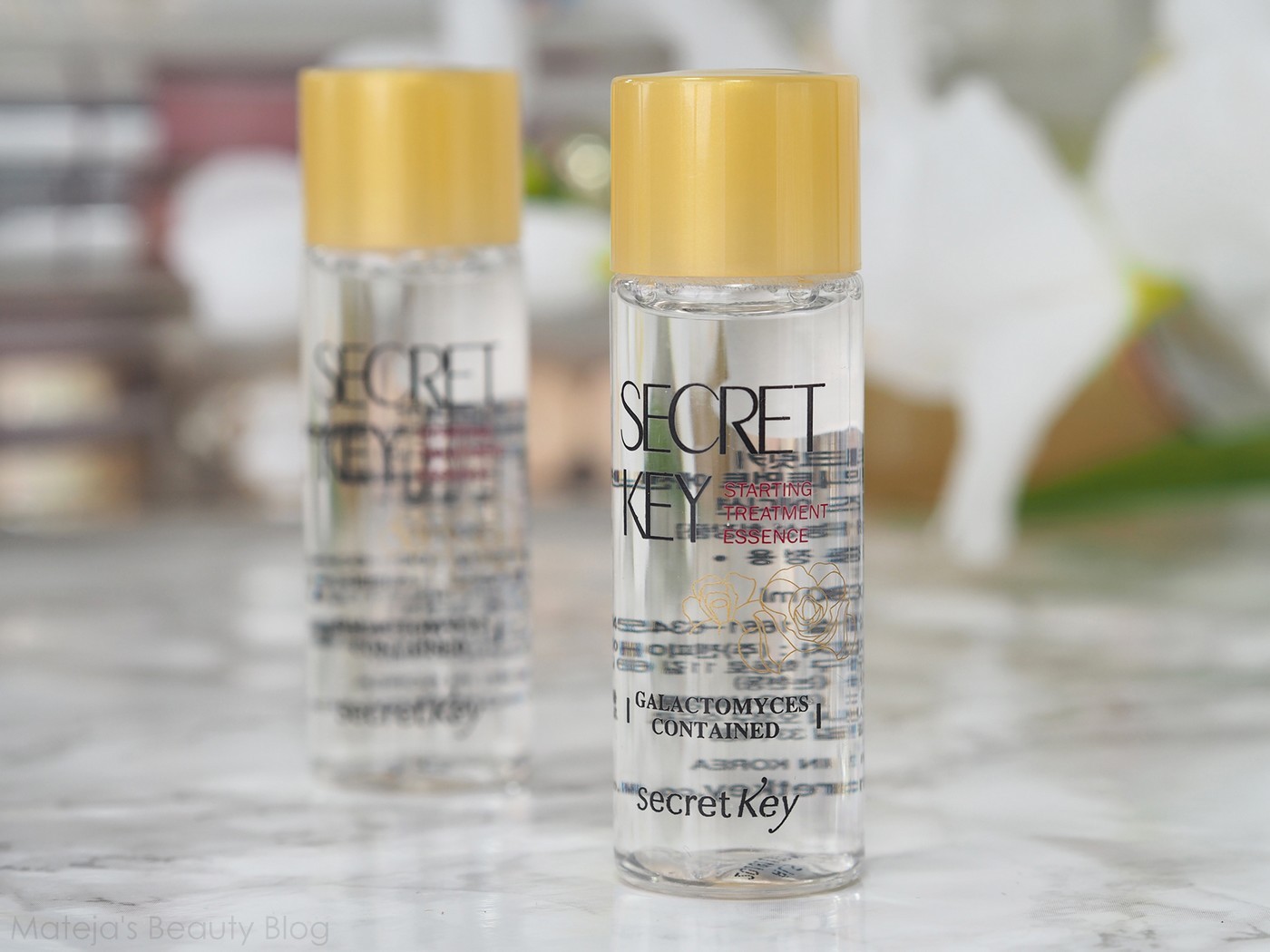 SECRET KEY Starting Treatment Essence (Rose Edition)
I’m becoming a fan of essences because they agree with my skin, so this is my third one I’m trying, first being the fantastic COSRX Galactomyces and the second their Snail Mucin. I bought these 30 ml samples first, since my plan was to properly test products before I commit to anything. Secret Key is a choice for those who are on a budget (or trying to keep the costs of parcels under 22€) and though it’s not nearly as famous as SK-II or Missha’s Time Revolution, I’ve heard some great feedback. The texture is similar to COSRX Galactomyces, so a thicker toner and it has no scent (thankfully. I was afraid it’s going to reek of that granny rose scent). Mine is the Rose edition, which I’m not sure it’s permanent, but I hear some prefer this one to their original. I’m testing it together with Skinfood Black Sugar Serum (will be in the next part on new in), one on each side of the face, so I can see the difference. In this case there isn’t any, except this feels lighter. My skin looks nice with this – it’s got a nice healthy glow and no dryness, but pores look only slightly better, so not as good as Galactomyces. Likeable, but CORSX appears to be better for me, as is Su:m37 Secret Essence. I still have a lot of it and you use little at a time, so I’ll report back in an empties or a skin care related post because I have a feeling it might surprise me with longer use.
Ingredients.
eBay, $6.02 (RoseRoseShop, took 48 days to arrive. 2 x 30 ml) 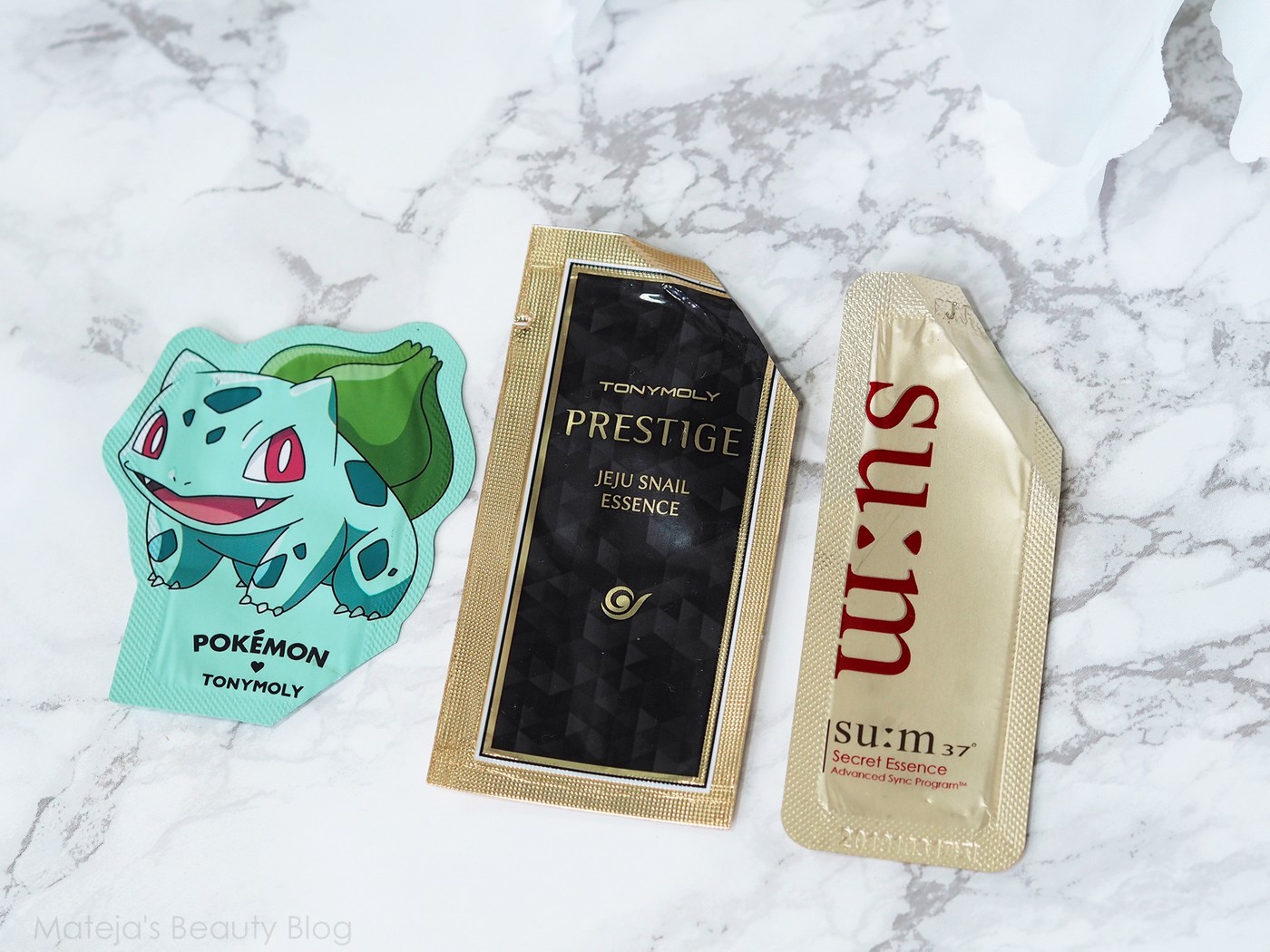 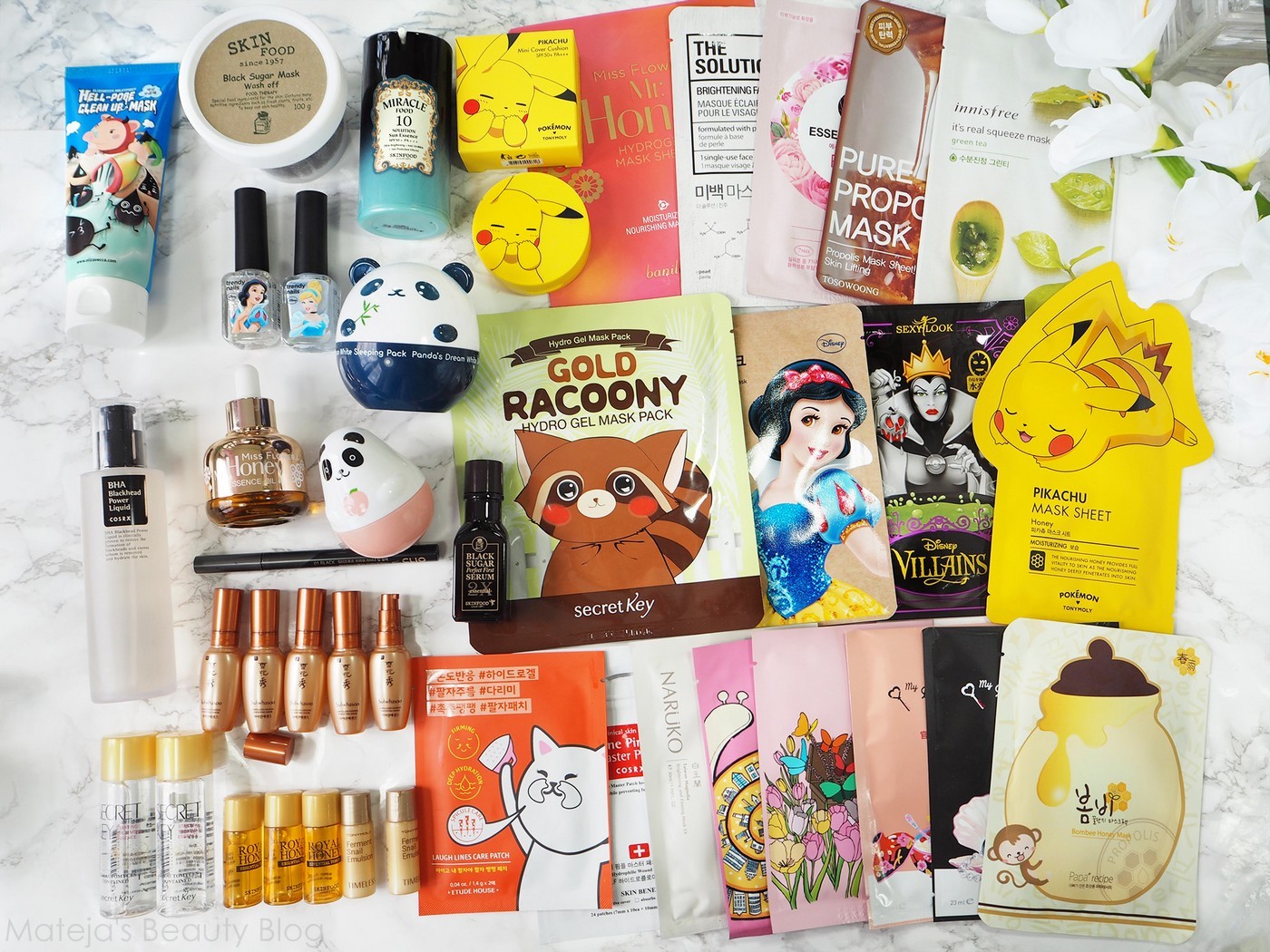 There’s more beauty bits coming in the next posts. I split it into three because it was just too much and even I got bored reading it all at once. 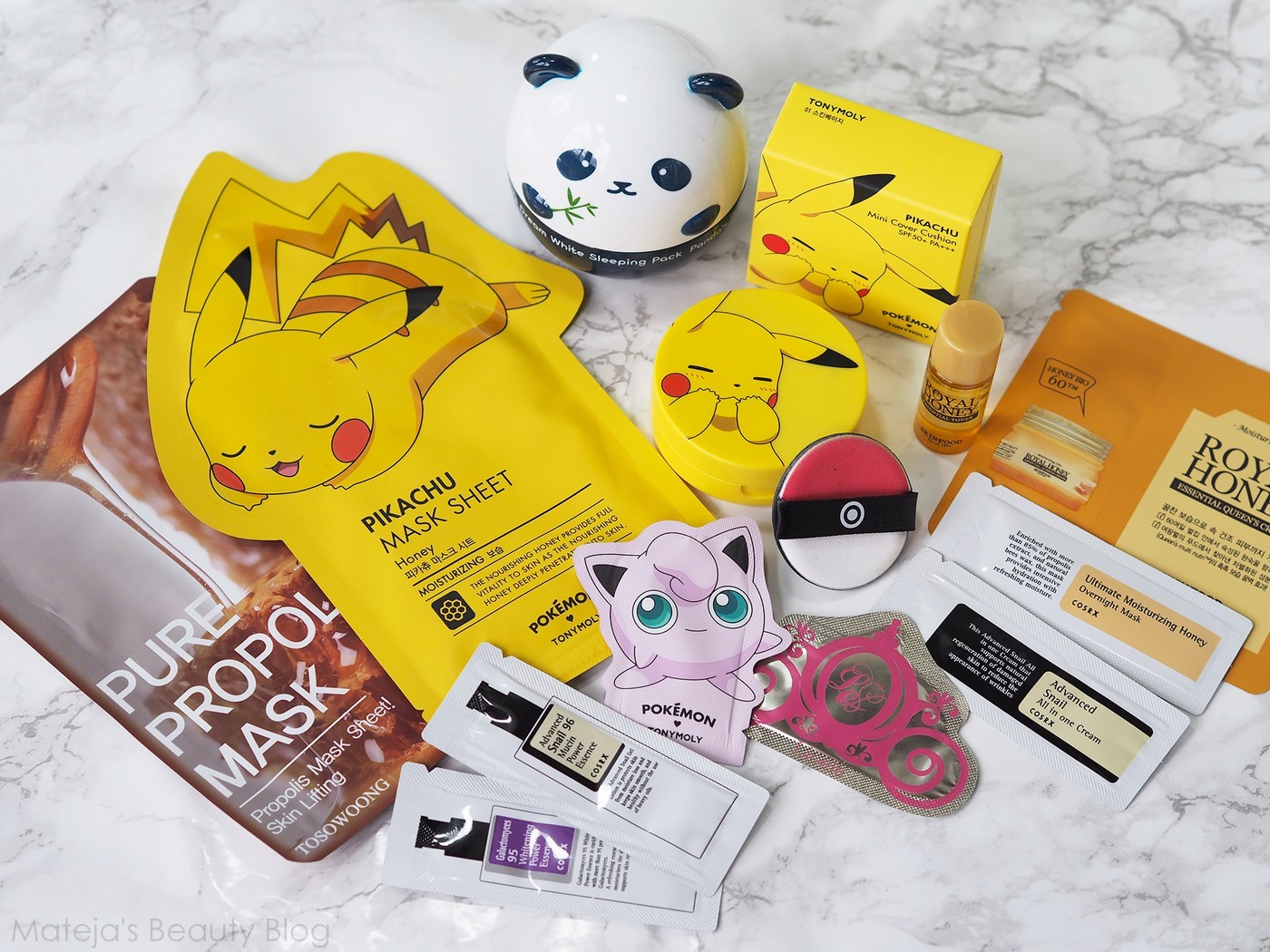 Have you tried any Asian cosmetics or skin care? Do you have any recommendations? Have a great day!