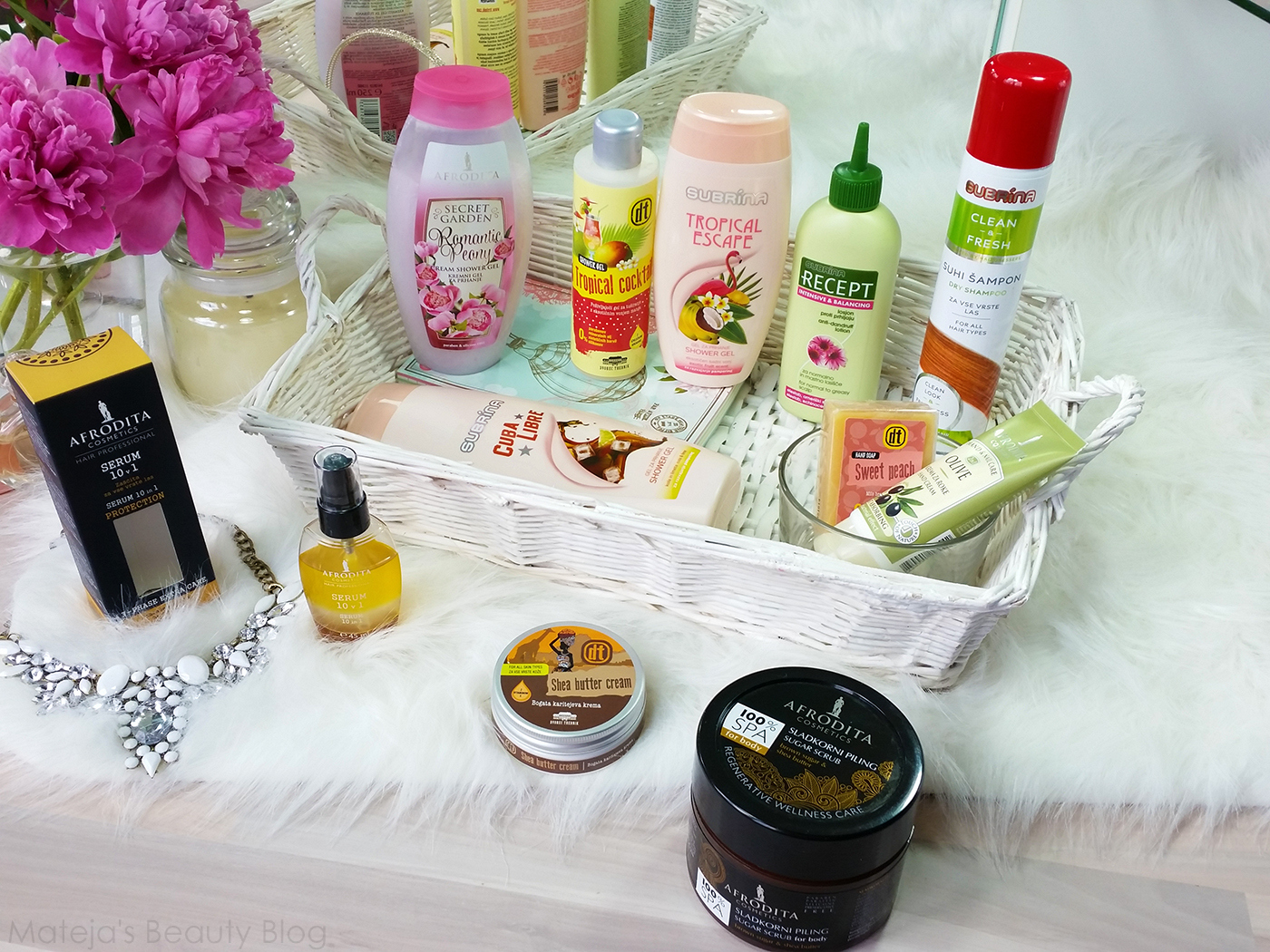 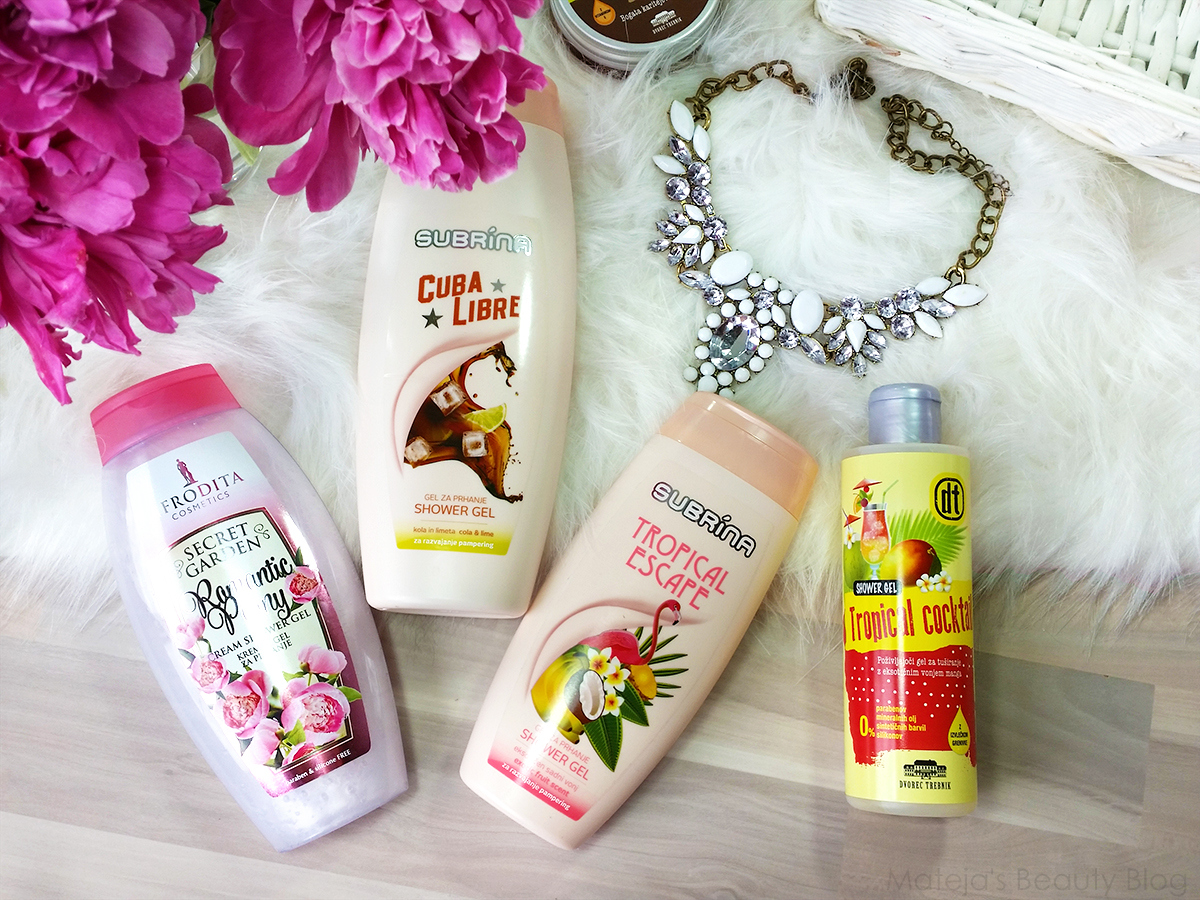 Romantic Peony
I’ve never bought an Afrodita shower product before because I don’t like any of their scents, but this one appealed to me. It’s a nice creamy shower gel-cream that foams ok and doesn’t feel too thin, however, it’s not like Dove’s shower gels and I notice I have dry skin after use like at most regular gels. It smells lovely, not classically floral, but already almost fruity, I swear I smell pear. I smelled all the scent from this Secret Garden Collection in the shop and liked three out of four, only rose really isn’t my scent (I hate classic rose scents). The sweets line is a total miss for me though in terms of scents and I usually adore candy scents. I’ve already used almost an entire bottle and it’s the most used shower gel in the bathroom.
Ingredients.
Interspar, 1.97 €
SUBRINA Shower Gel
Cuba Libre
I hear Subrina shower gels aren’t that popular, at least among bloggers I know. I kinda get why, but if you’re not fussy about shower gel (I like Balea’s for example and there aren’t many who truly love them), these are just fine. It’s a basic, clear shower gel that more on the thin side and it’s a bit light on the foam for my taste, but perfectly fine. It doesn’t nourish the skin at all, so moisturiser is needed afterwards if you have problems with dryness. I picked this one because it smells exactly like Haribo Coca-Cola gummy sweets, so it’s something for those with a sweet tooth, personally it’s right up my alley. I smelled all of the showers gels from Subrina and really loved all of them apart from the oriental one, so for my taste they have a better selection of scents than Afrodita. They’re basic, like Balea’s or Dusch Das, but smell really nice and that’s the most important thing to me when it comes to shower gels.
Ingredients.
Interspar, 1.79 € 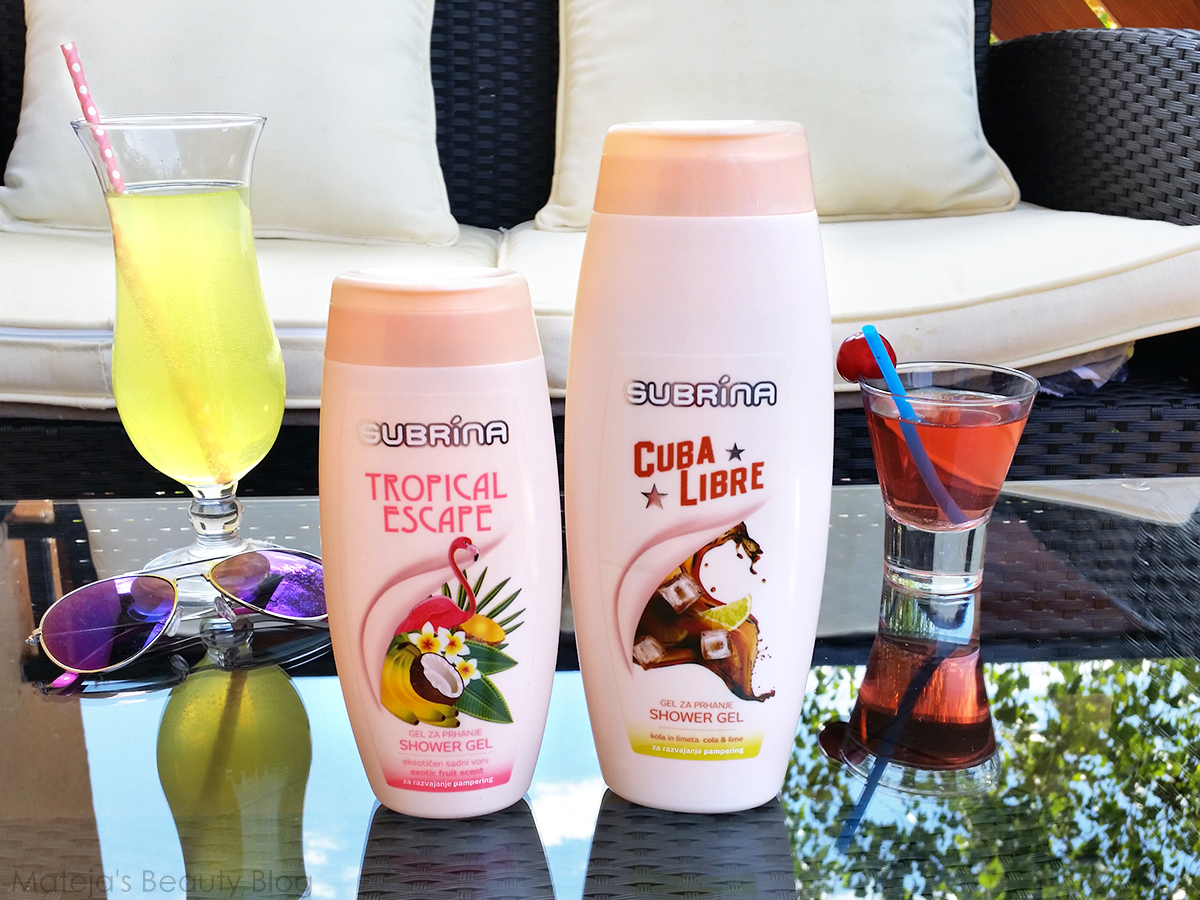 *SUBRINA Shower Gel
Tropical Escape
This is actually the newest addition to the Subrina shower gel line and I’m not sure if it’s even sold already in all the shops. I had write about this one separately even though it’s in the same line as the previous one, but the formulas as quite different. This one is creamy, already more substantial that Cuba Libre and it foams ok. It smells similar to Escada’s Taj Sunset fragrance, meaning it’s not a classic very fresh tropical scent, instead it’s a deeper mango scent that’s very sweet, but I also smell some bananas and pineapple.
Ingredients.
Click2Chic, 1.59 €
DVOREC TREBNIK Tropical Cocktail shower gel
Apparently I can’t walk past a tropical shower gel, though actually if I were picking again, I’d pick the shea butter one. This has a fresh fruity tropical scent, they say it’s mango and I think it’s a mix of fruits. What I’m not impressed by is the formula. It’s very thin and liquidy, so it doesn’t foam all that well and looking at ingredients, they aren’t that different from both Afrodita’s and Subrina’s version, so why such a difference, I don’t know. I’d make it thicker, then I’d like it. Like all the previously mentioned shower gels I notice those dry little flakies on my skin after shower, so lotions are recommended after use.
Ingredients.
Mercator, 2.99 € 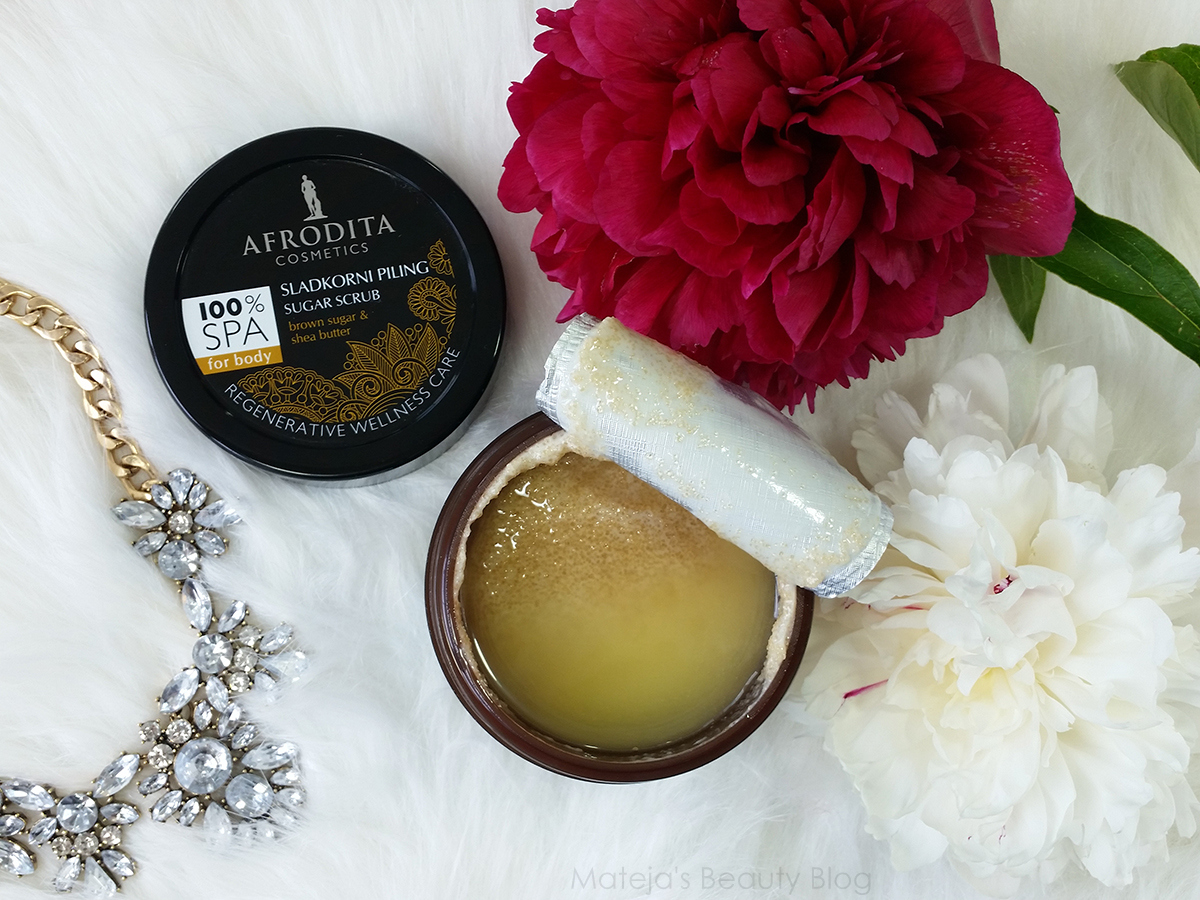 AFRODITA 100% Spa Sugar Scrub
I heard many very positive reviews about this, so I was excited to try it, since there aren’t many good drugstore scrubs around here. I’ve tried a lot of scrubs in my life and I like very harsh ones, so my favourites are L’Occitane’s Honey and Soap & Glory scrubs (which are awesome!), I have to say this Afrodita’s one kind of failed to impress me. You know what this is? It’s a homemade sugar scrub. It feels exactly the same as the ones I make at home, it even smells about the same. It’s sugar, lots of sunflower oil, shea butter and some vanilla fragrance. It’s very, very greasy, something that unfortunately put me off. I make it a lot less oily for a reason, but I assume they had to use that much oil to prevent it from clumping (mine always clumps after a week). It’s very harsh, that part I like a lot, but as I said its regular sugar, however, the oiliness it excessive and you end up greasy as a pig in the oven, it’s basically necessary to use a regular soap after because shower gels just don’t cut it. It smells vanillary not in a cookie way, but in a typical scented way. It’s not bad, but I wish it was more like Soap & Glory’s.
Ingredients.
Interspar, 4.09 € 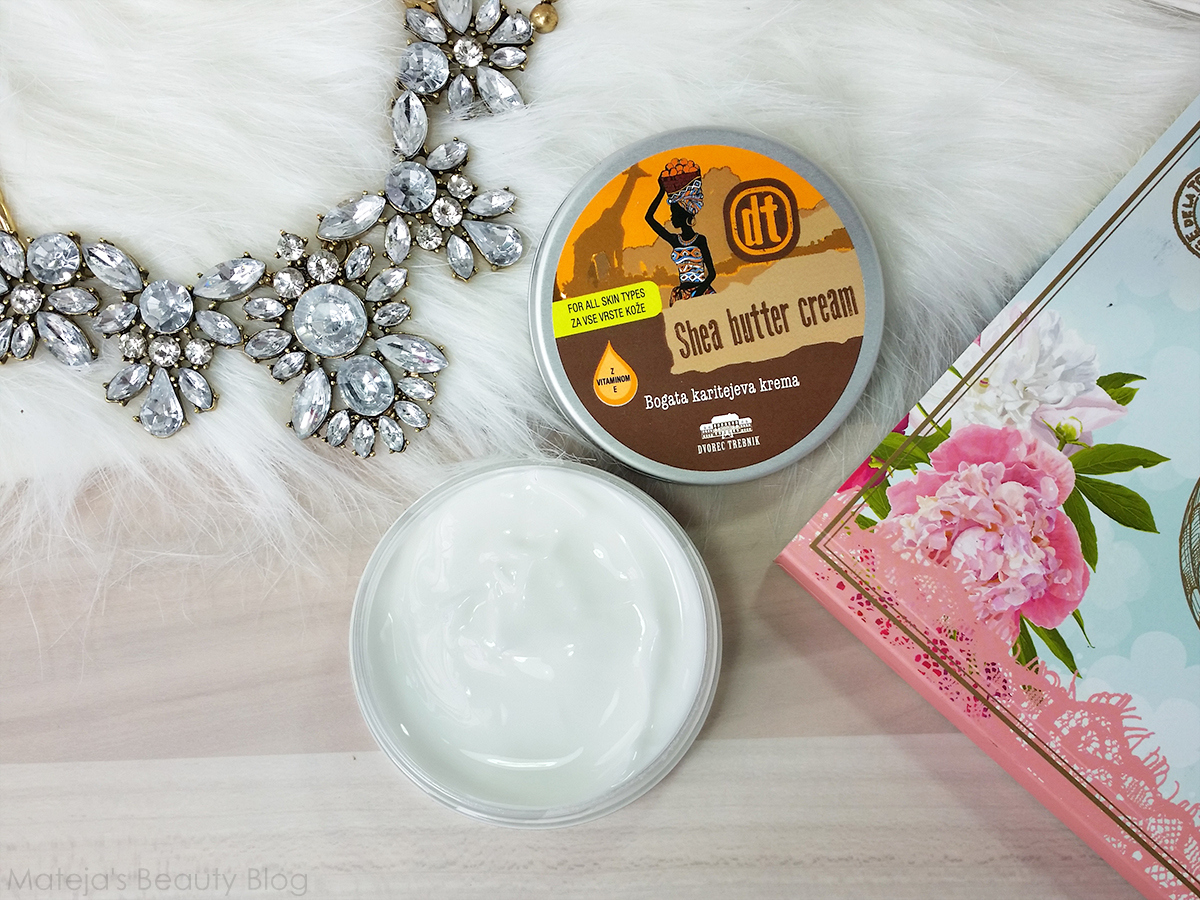 DVOREC TREBNIK Shea Butter Cream
Looove this! I did not expect to like this product as much as I do and that’s why I only took the 50 ml travel size. It smells exactly like The Body Shops’ Shea Butter body butter, a scent I adore. It’s nothing special – clean, a bit nutty and creamy, but I love it. The texture is as the name says a cream, not a thick butter, so it’s not as greasy and it doesn’t take that long to sink in, but it’s nourishing enough for moderately dry skin, though sometimes I feel I need more. I think I’ll buy a full size one day, but mostly because of the scent.
Ingredients.
Mercator, 3 € (small version 50 ml, full size is 8.99 €) 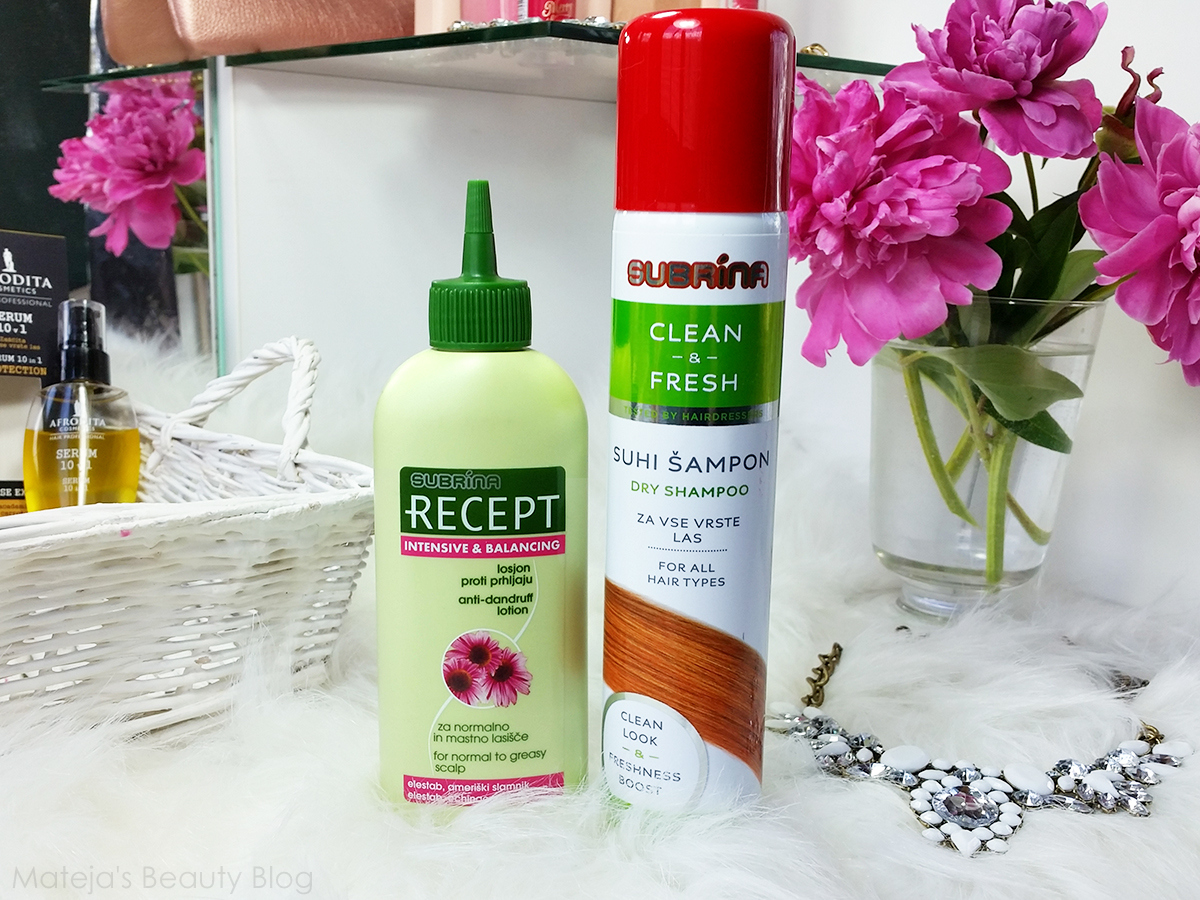 SUBRINA RECEPT Anti-dandruff lotion
Whilst perusing the isles of Műller, I had the worst itch on my scalp, it hasn’t been so bad in a while, so I was ready to buy anything that promises to work fast. I saw this had a discount and I just grabbed it. First use was a bit of a disaster because this is a liquid, like water and despite the great nozzle, this still runs everywhere if you’re not careful, including in my eye (it has alcohol on the second place, so that was really fun), but it worked. The annoying itch was gone. The effect are very similar to Alpencin Forte that I’ve loved for years, but it’s easier to find and a lot cheaper. Also it doesn’t smells as intensively of schnapps, but it’s not a pleasant scent either. I think I found my new scalp saviour. By the way, it doesn’t help reducing the amount of dandruff, it just calms down the scalp.
Ingredients.
Müller,  3.89 € 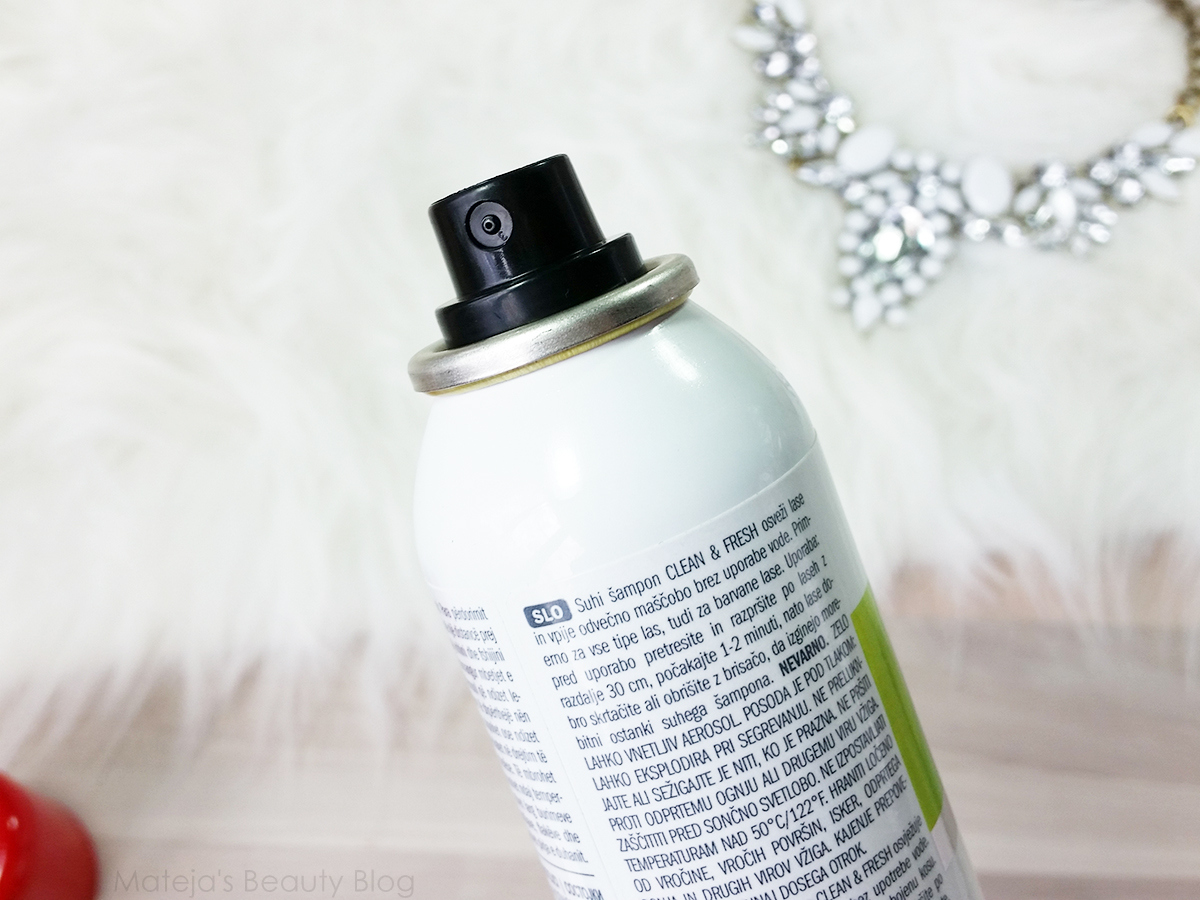 *SUBRINA Clean & Fresh Dry Shampoo
I think this is the first Slovene dry shampoo and I’ve already seen it in Müller. I think it’s rather good, but you know I don’t have oily hair, so I can only say how well it refreshes the hair. It’s white, I expected that, so if you have very dark hair like me, you will need to comb the hair well after use. It’s got a lovely fresh, clean linens scent that’s mixed with almost a perfumey floral scent and it’s gentle, inoffensive and pleasant, so not like Balea’s which made me basically choke. It leaves the hair very light, so there isn’t much of the touchable residue despite the whiteness and unlike at for example Batiste, I don’t feel like I need to wash my hair the next day, but it’s just keeps the hair fresh and airy. It gives a bit of volume, though not as much as some other (mostly because it’s lighter that those) and also not much texture. For blondes and other with light hair, it’s really nice.
Ingredients.
Click2Chic, 3.49 € 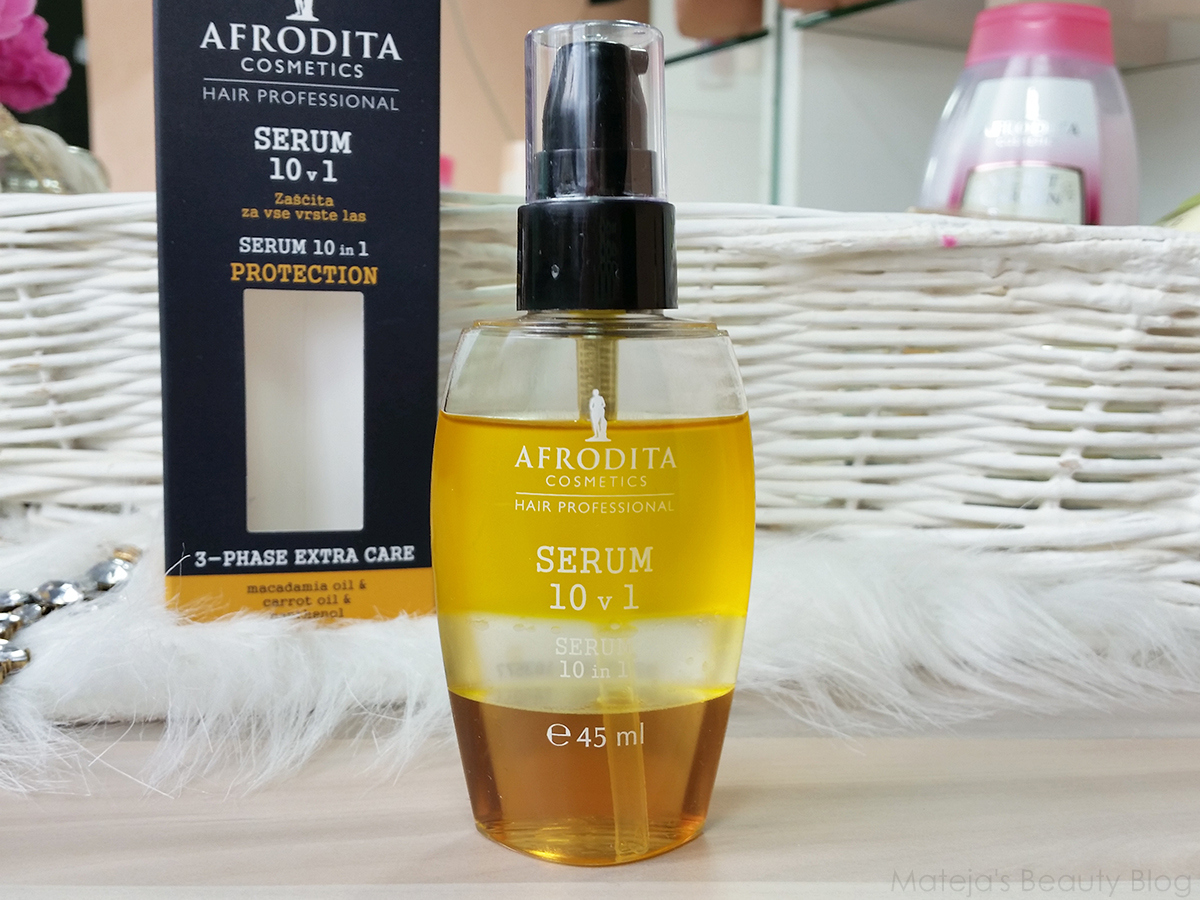 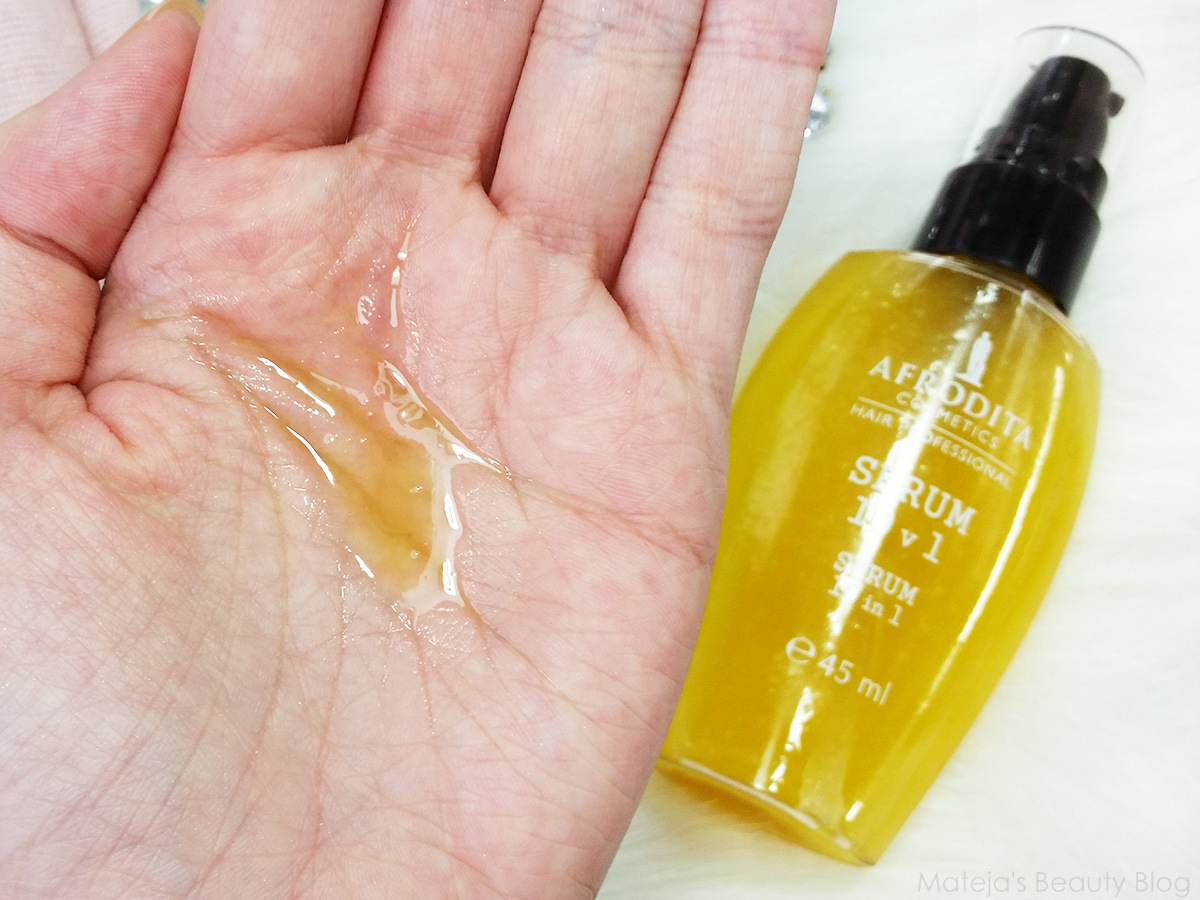 AFRODITA Serum 10 in 1 Protection
When I was buying this, I missed the silicone on the third place, so I was under the impression, this is a mix of proper oils that I could use when my hair is really dry and as a pre-wash treatment. Well according to ingredients it’s a regular silicone-oil, but with a smaller silicone content than most, since sunflower oil is on the second place. I’ve tried a lot of such products in my life and all work about the same, so I was convinced I’ll never find a bad one. Well, I found one. Yes, this will be a classic Mateja’s bitchy hair review, but the main problem of this oil is that it’s trying to be something between a proper oil and a silicone oil, and it just doesn’t work. It’s got three layers with different densities and then you need to shake it well, so it mixes into one misty, yellow fluid. It’s very, very light and the packaging is just wrong for such a formula, it should be a spray because now it just spritzes out with such force, plus it doesn’t stay on the hand no matter how you try and you lose product. On the plus side, since it’s so light, it mostly likely won’t make any hair greasy. They say you should use it on damp hair, which I agree because on dry hair, it just sucks as it does absolutely nothing. On damp hair if I use a hair dryer after, my hair is a bit sleeker and more manageable, but other products do it better. They went in the same direction as a lot of companies, bragging about a million effects, which is plainly said very annoying, but among other it’s also a heat protectant and that’s one of the rare pluses I’d give to this product. It has this strange scent that like it’s an oriental perfume, but mixed with a scent of rancid oil.
I noticed a lot of Slovene bloggers got this oil at an event and there were no reviews after, so I should probably have taken this as a sign, but I was curious. Does anyone love this?
Ingredients.
DM, 3.99 € 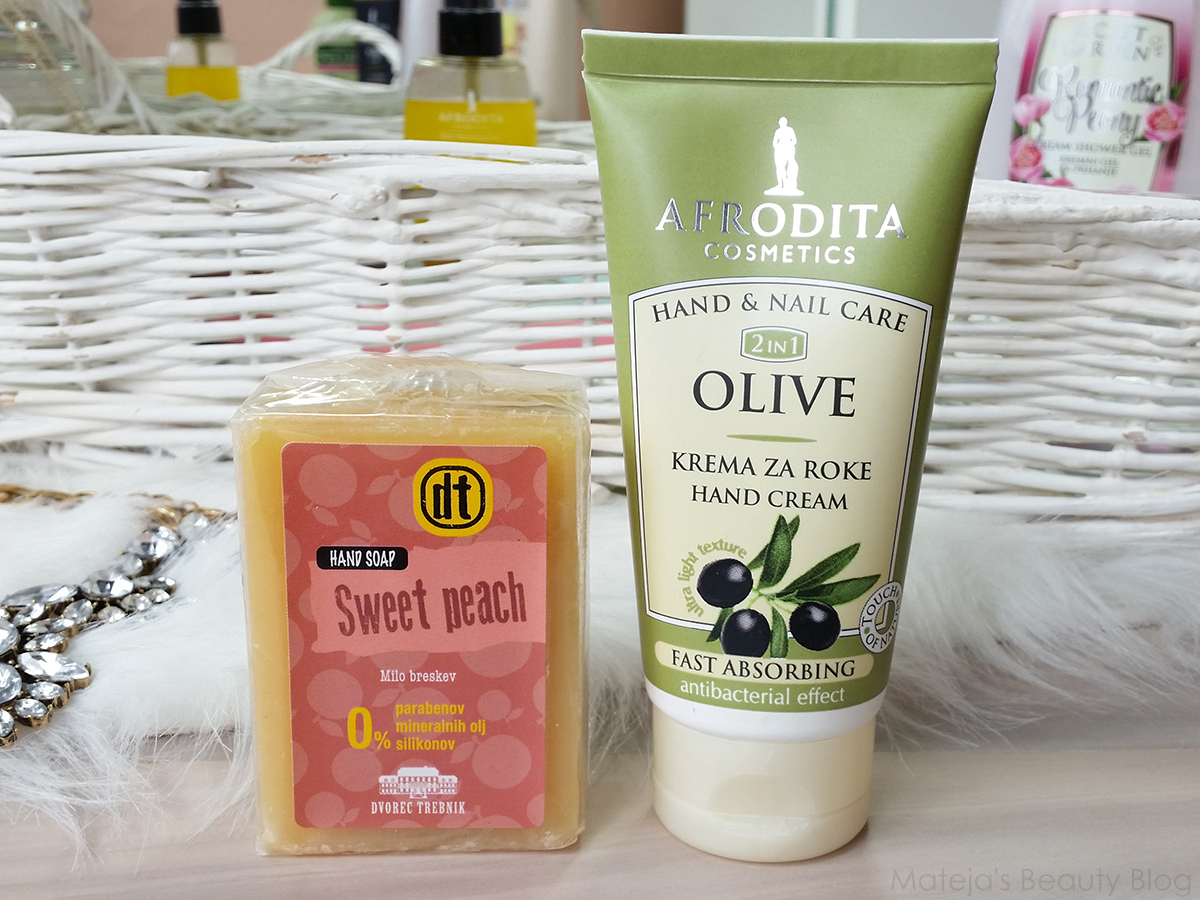 DVOREC TREBNIK Hand Soap Sweet Peach
I think it’s clear why I got this – I honestly can’t walk by anything with peach. But this is a massive disappointment because it’s the most basic of basic soaps and one that’s über retro feeling. Seriously, I get flashes of my grandmas bathroom back in 95. It doesn’t smell anything like peach, just an old-ish clean herbal scent. I dislike that it’s a square design because it’s annoying to use and it’s like any other cheap soap that  leaves that drying, squeaky clean feeling, though I don’t mind that as much. If you like retro things, this might be for you.
Ingredients.
Mercator, 1.89 €
AFRODITA Hand Cream Olive 2 in 1
I’m super fussy about hand creams and I rarely use them because I dislike most (I like Nuxe’s, Weleda’s and love those Balea’s Pflegecremes). This is another one I dislike. I picked this one because it says it has an antibacterial effect, those they say the effect is mild and I don’t recognise any of the ingredients as being antibacterial (I’m not that good at reading them). It’s a light lotion, but it just takes way to long for me to absorb, a few minutes, and I’m a person who can’t stay still for long. Once it’s absorbed, I just feel that it’s not enough, like it didn’t really nourish my hands. The scent is ok, but not my favourite. It’s a musty lemony scent. I’ll give this one to someone else.
Ingredients.
Müller, 2.85 €

In case you missed the first part of my Slovene brands new in you can find it here.