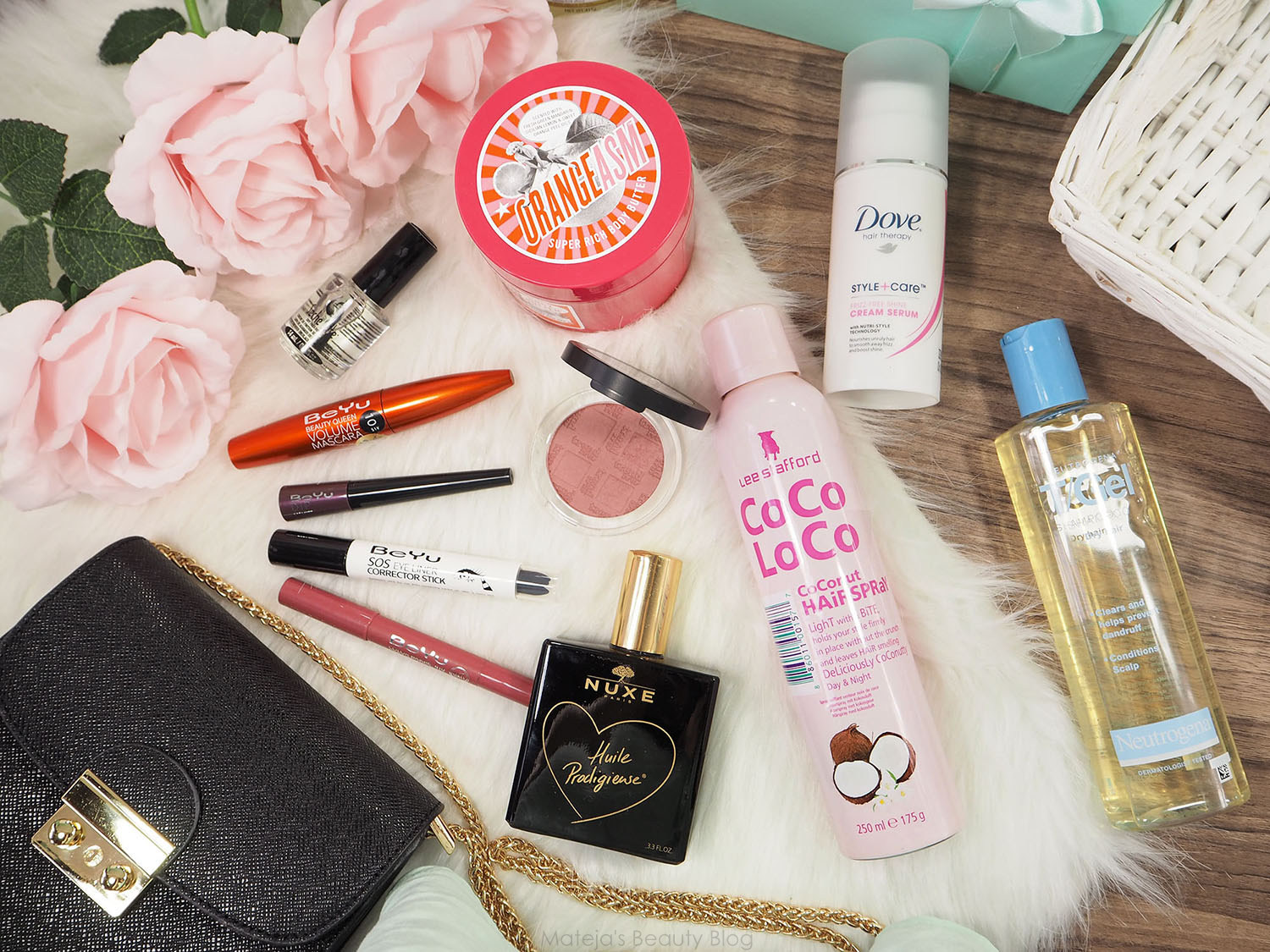 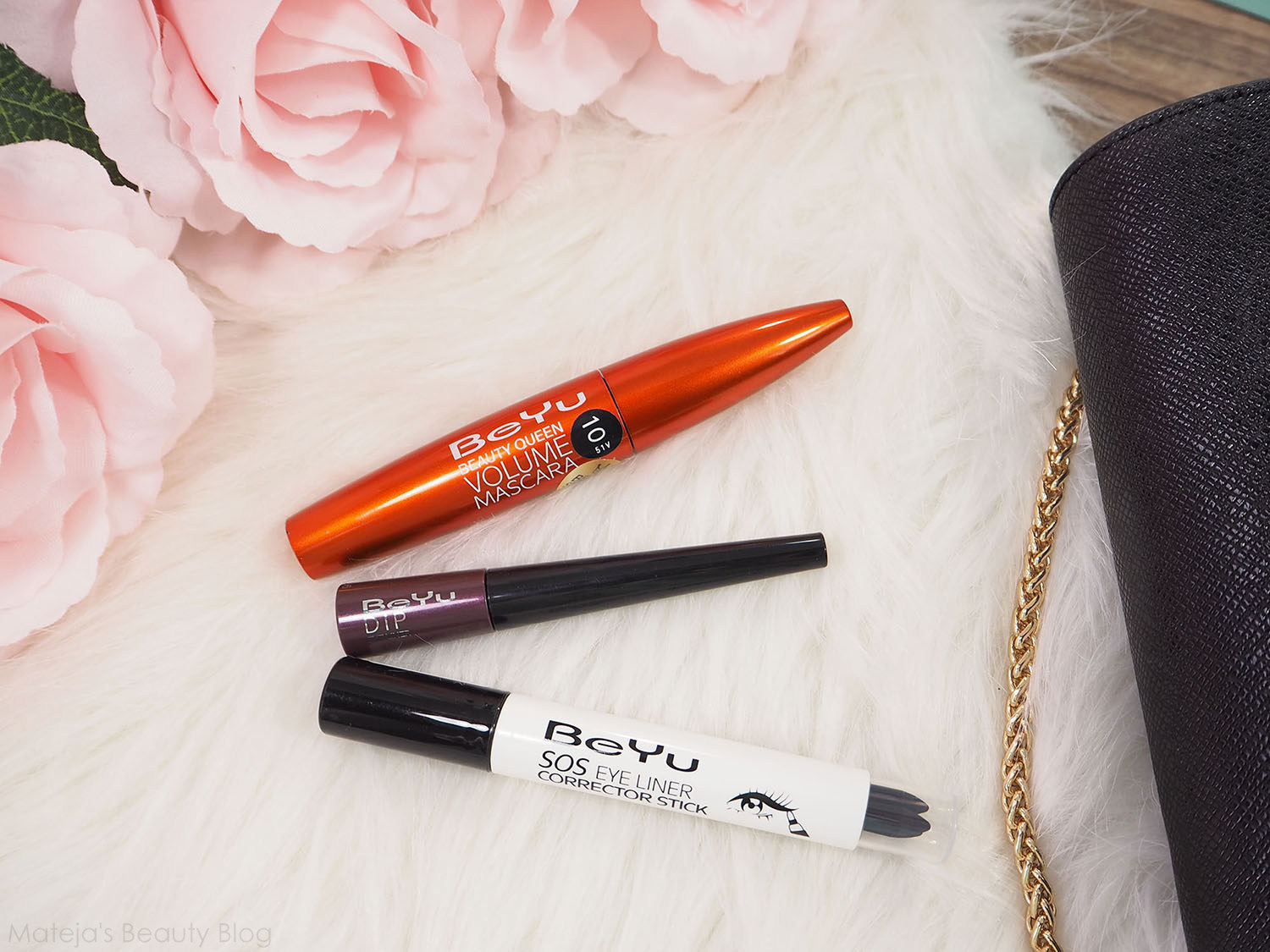 BEYU Beauty Queen Volume Mascara
Either I’m having a lucky streak when it comes to regular mascaras or they’ve actually improved, but this is another that impressed me. Actually I think I might like it more than Max Factor’s Voluptious for which I just shelled out 14 € and  I just hope it doesn’t dry out because I’m only using thing one. First world blogger problems aside, this is an amazing volumising mascara that catches every lash and doesn’t clump them up. It also isn’t all weirdly gloppy and wet that it would drop my lashes, instead it keeps them lifted well enough, though my right set of lashes still hits my glasses if I don’t place them a bit lower on my nose, which is a bit annoying (another set of first world problems). The brush is also a lot more comfortable to use than Max Factor’s, so this one really is a winner in my books. Well, apart from the ugly packaging.
BEYU Dip Eyeliner
03 Certain Charm
A colour eyeliner? In my favourites? Well, it not like it happened for the first time, but this is the first purple one. The formula is very liquid, so you need to be a bit more patient when waiting for it too dry, but it’s very pigmented, it doesn’t crumble or smudge on the eyes and it’s long-lasting. The applicator is just right for a precise application and even though it’s not black, it manages to emphasise the eyes just right. I really wish they had this is a rich, midnight blue as well.
BEYU SOS Eyeliner Corrector Stick
I never believe in such products and this one is also quite expensive, but it works perfectly. It’s an oily remover in a pen, so you need to stick to small fixes, but for cleaning up the liner and making it look sharper, it’s ideal. 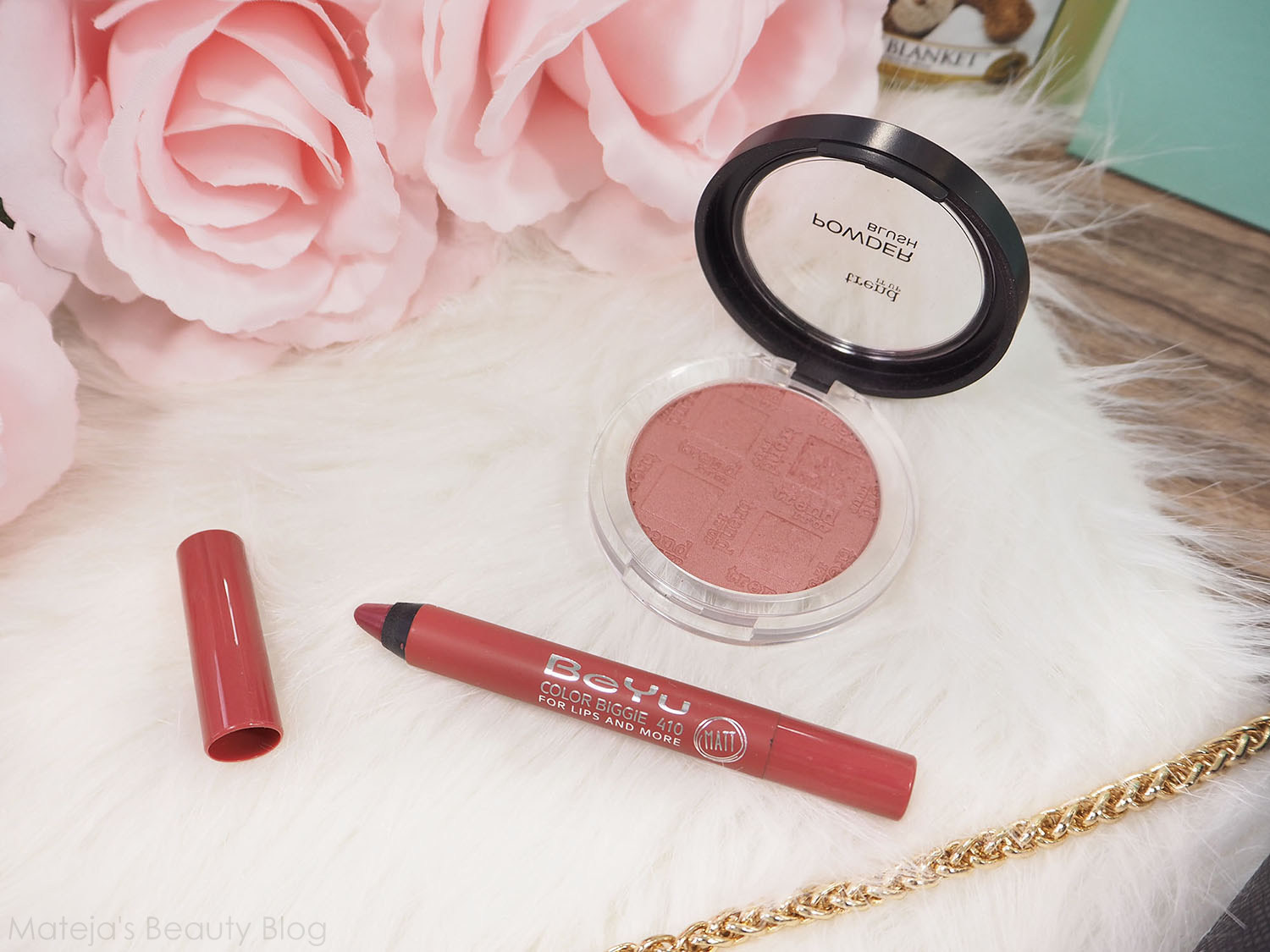 TREND IT UP Powder Blush
050
You know my eyes sparkled when I first saw this shade. It’s so my colour. Like a million times before I’ll say that my favourite blushes are Catrice’s Nut’s About You and Milani’s Romantic Rose, which are dupes for each other – well 050 is a hint more mauve than the two, but it also has that gorgeous healthy sheen on the cheeks, which is something Catrice’s blush promised, but never delivered. It’s a blush that you can wear with anything because it looks so natural on the cheeks. The only thing I resent is staying power which isn’t that amazing.
BEYU Color Biggie
410 Dusty Rose
This is how a matte lip crayon’s formula should be – none of that creamy-shiny stuff, but a proper matte finish partnered with a great staying power. Those with lips sensitive to drying out beware because this isn’t for you, but for the rest, this is a great lip product. I got a muted peachy shade that is very everyday appropriate, but I still have my eyes on one or two more shades of these. 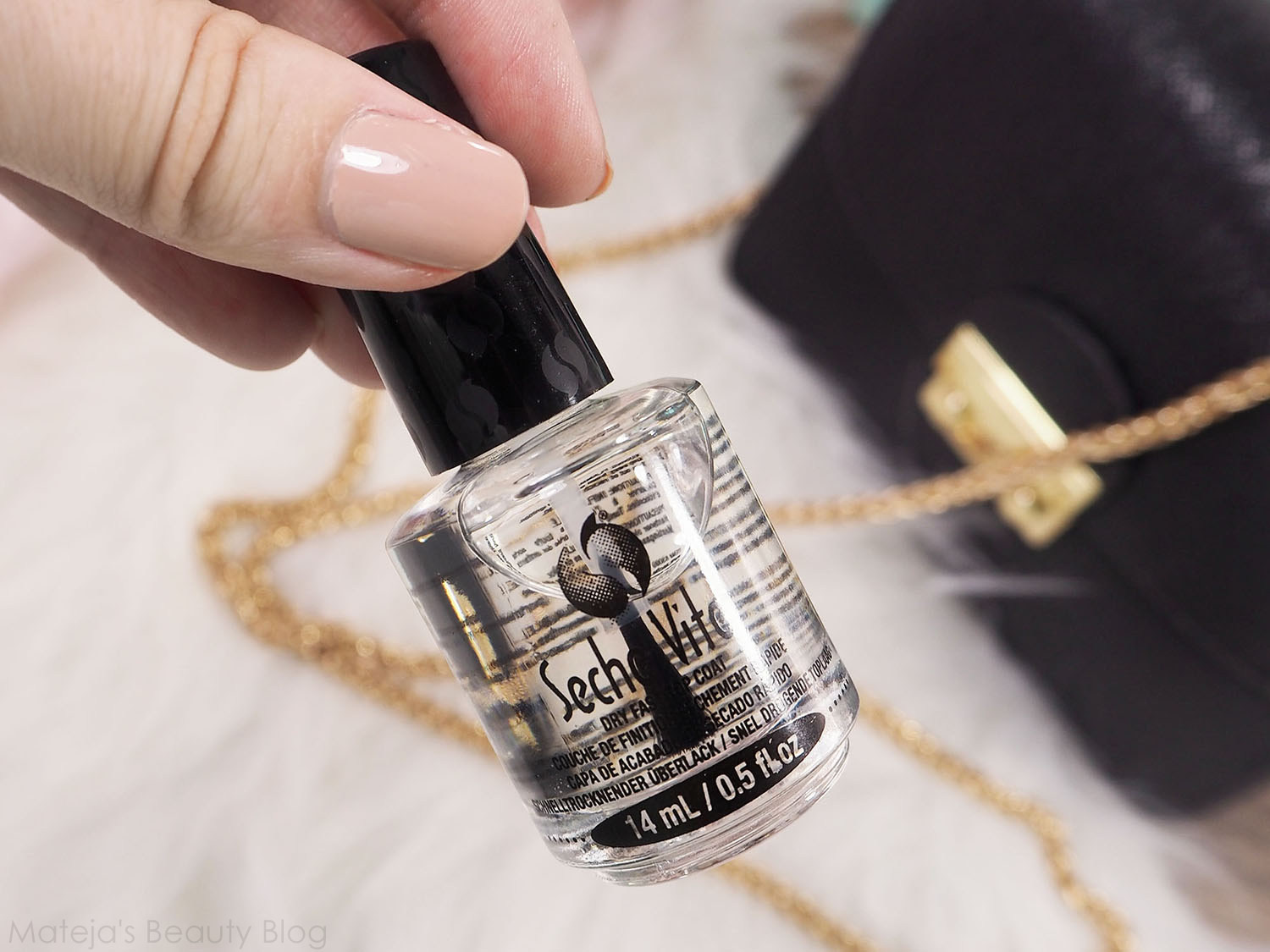 SECHE VITE Dry Fast top coat
This is just the best top coat ever. Period. I’m not a patient woman and with this my nails are dry in a minute. In the horrible era I was without it, I also realised it helps a lot against chipping and it evens out the nail polish if you make any mistake. Too bad it thickens when you use up about a half, but nothing is as good. 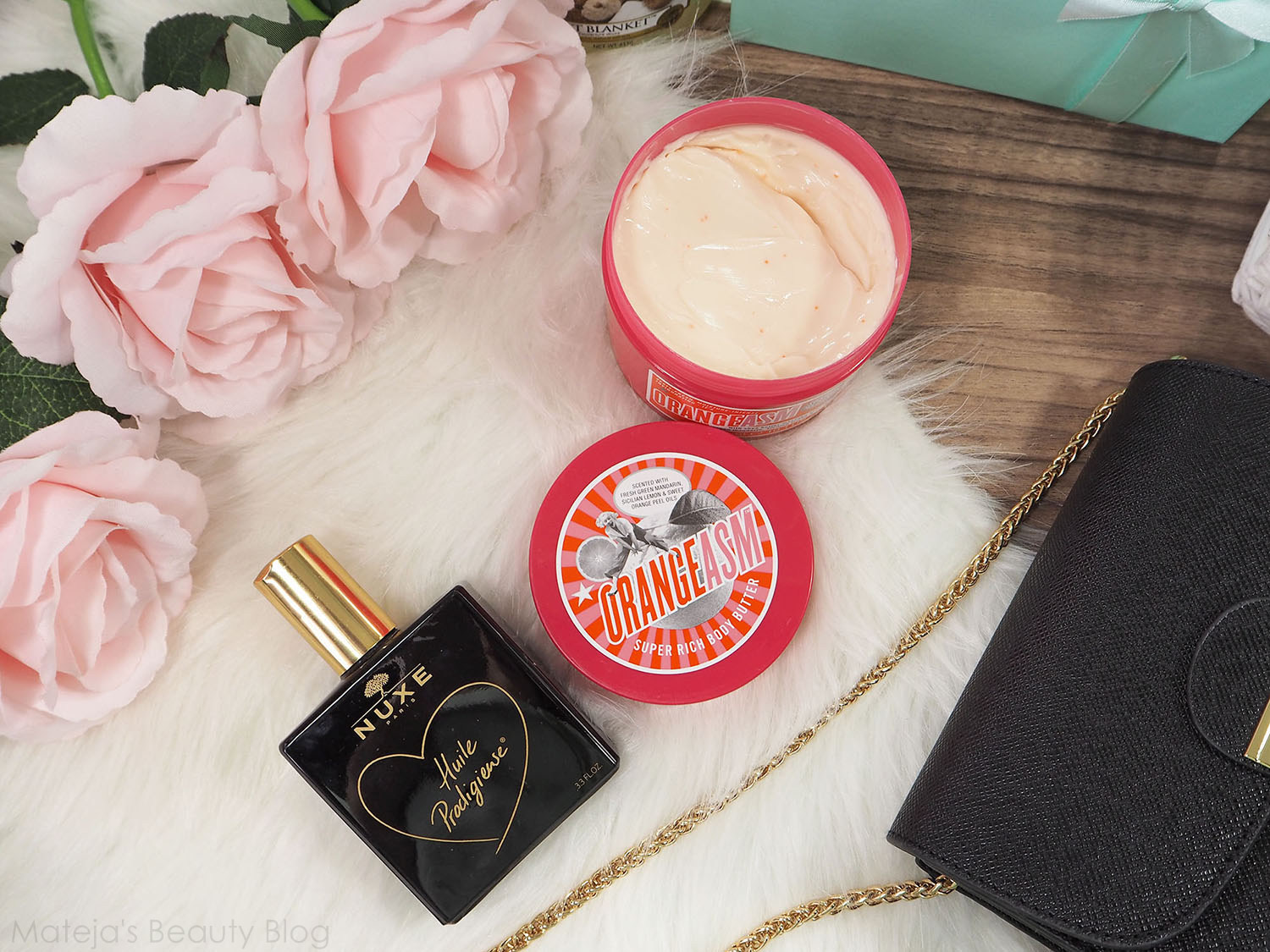 SOAP & GLORY Orangeasm Super Rich Body Butter
First of I love S&G scrubs and body butters, they just have the best texture ever apart from The Body Shop, but from the start I wasn’t too sure I love the scent of this one. Then one day I applied it on damp skin after shower and I could just smell it for hours, which made me realise I really like this. I expected the TBS’s Satsuma scent, but this is less sweet citrusy, instead it’s more bitter fresh and to me it smells like a Lush shop, so it reminds me of Christmas because that’s the only time I visit that shop every three years. It works a treat on my visibly dry, flaky skin and it doesn’t take ages to absorb.
NUXE Huile Prodigeuse
I realized I haven’t talked about this in forever, but I just used up another bottle and I’m still using it basically every day for over five years. Recently my skin has not been itself, I’ve made some changes in my routine and it wasn’t good, so I stopped using everything but the cleanser and this oil. Again it proved itself to me as my perfect match, a product I can always rely on making my skin feel more normal. 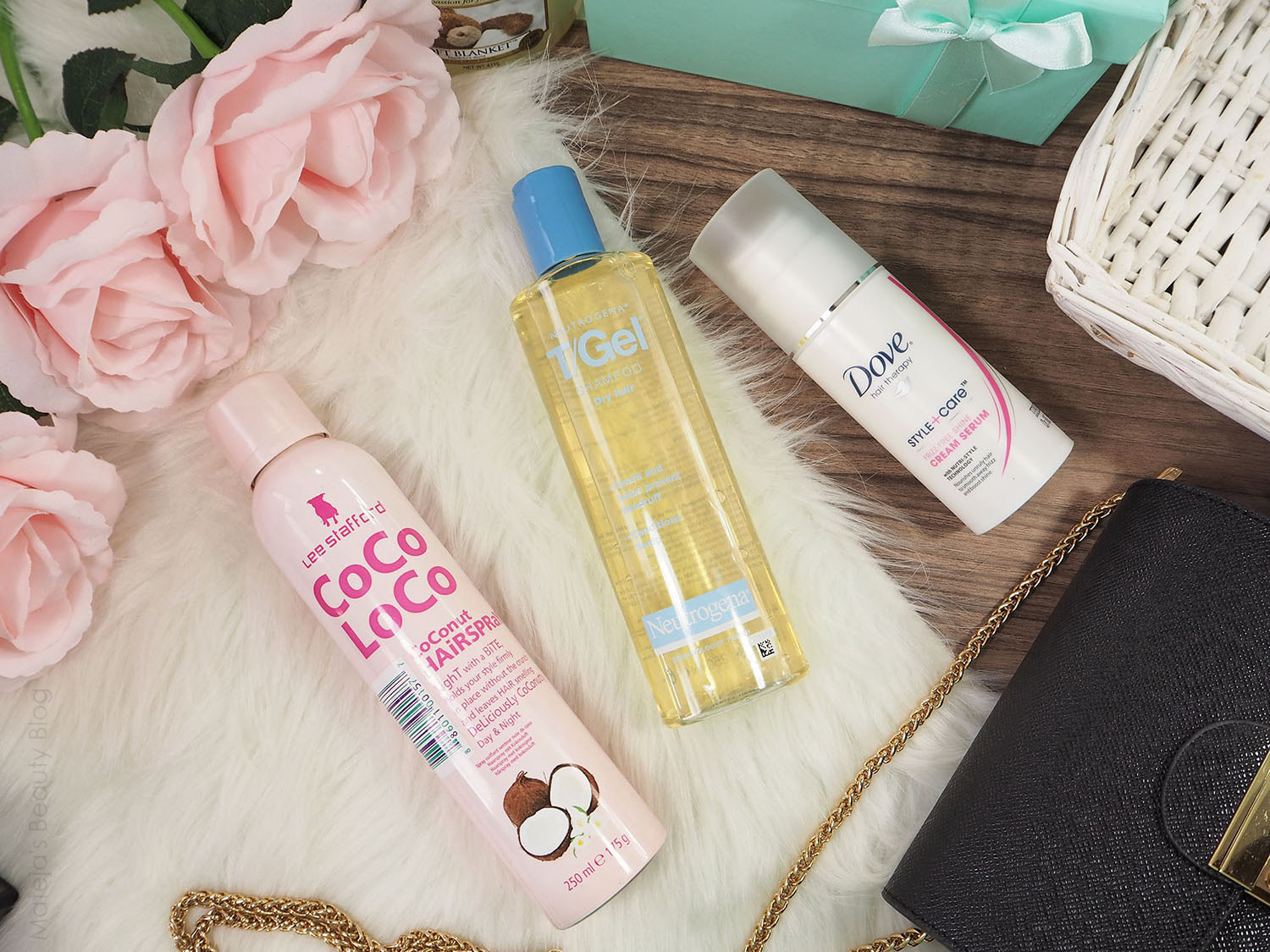 LEE STAFFORD Coco Loco Coconut Hairspray
I got this instead of Hold Tight, which is by far my favourite hair spray, but I got Coco Loco because coconut scent sounded more appealing, and I hoped it works the same. It does. It’s the same hair spray with a good hold that doesn’t leave that awful sticky and stiff feeling on the hair. The scent is ok, not exactly the amazing Raffaelo coconut scent, instead it’s more of a sweet-sour coconut combination and it lingers for quite a while, so if you’re sensitive to fragrance, Lee Stafford hair sprays won’t be for you, but they are one of the best on the market in my opinion.
NEUTROGENA T/Gel Anti-Dandruff Dermatological Shampoo for Dry Hair
Neutrogena again proved to me that they have the best anti-dandruff products. I already used up a bottle of Total version, which was only 100 ml since it’s an intensive version, but this is a less strong 250 ml made for dry hair. It doesn’t work quite as well, but better than anything else and it smells so much nicer than Total. It doesn’t nourish my hair that much, but at least it doesn’t dry it out.
DOVE Style+Care Frizz Free Cream Serum
By far the best hair care/styling product in the drugstores and you know I’ve tried a lot of them. It’s exactly the same as their Absolute Quench which I can’t find anywhere any more, but basically both are creamy serum leave-in products that can be used on both damp and dry hair. When I blow dry my hair it leaves them so silky and smooth, frizz is significantly reduced and nourished, though my hair does get dry as the days go by, so Quench is actually a bit better in that respect. If you have very stubborn, dry, frizzy hair you might like this.