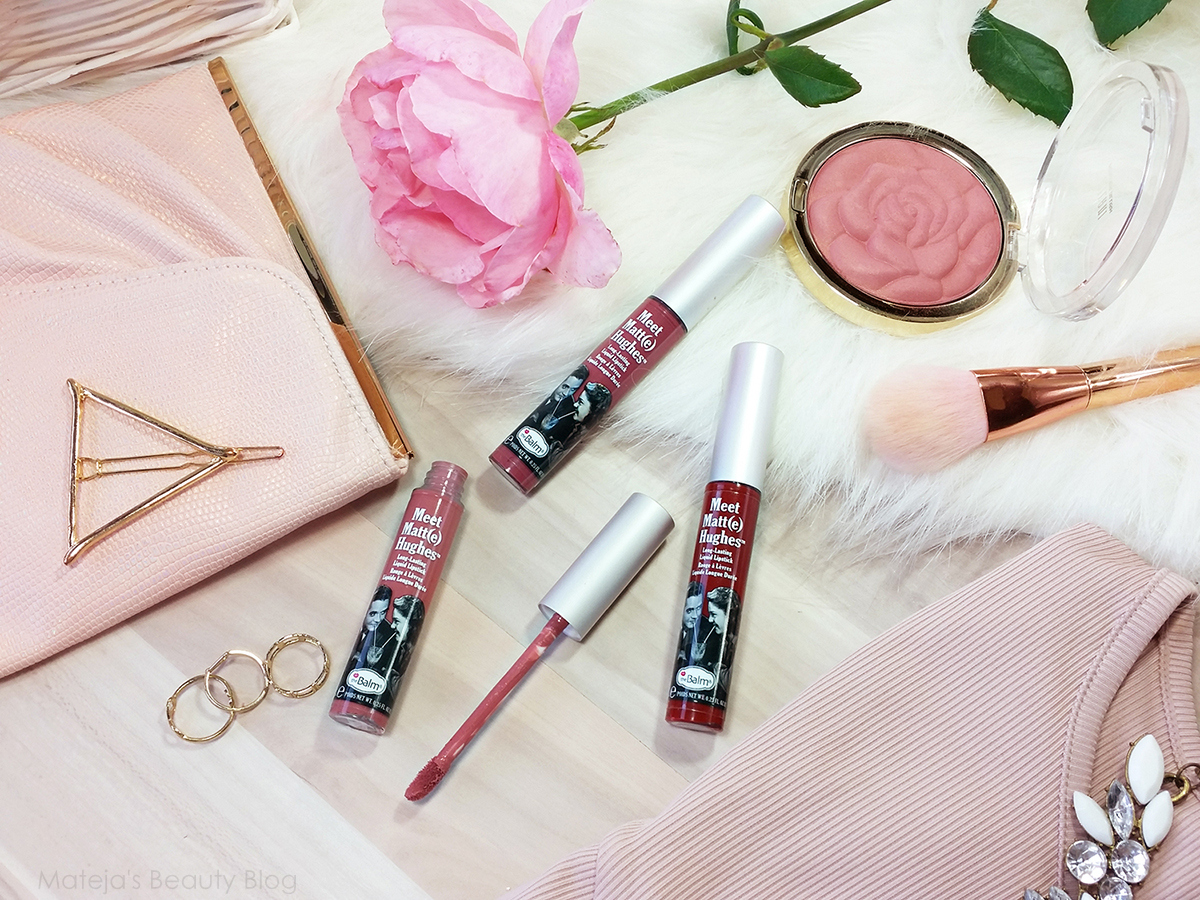 The fact that my collection of TheBalm’s Meet Matte Hughes is going to expand was a given the moment I tried my first shade called Adoring. I got that one as a birthday gift and it just blew me away with the quality, especially since it’s a dark burgundy shade, which usually does not work that well in liquid lipstick form. Charming was first on my wishlist, even though Committed appears to be more popular, but I was sure it’d be a better fit for me because it’s that muted rosy shade that I love wearing. I got Charming online, but when I finally swatched all the original shades in the shop, I grabbed Committed as well and it turned out to be one of my better decisions yet. Surprisingly the formulas of both my new shades are different than Adoring’s, but all are excellent quality and deserve a place in my All-Time favourites. 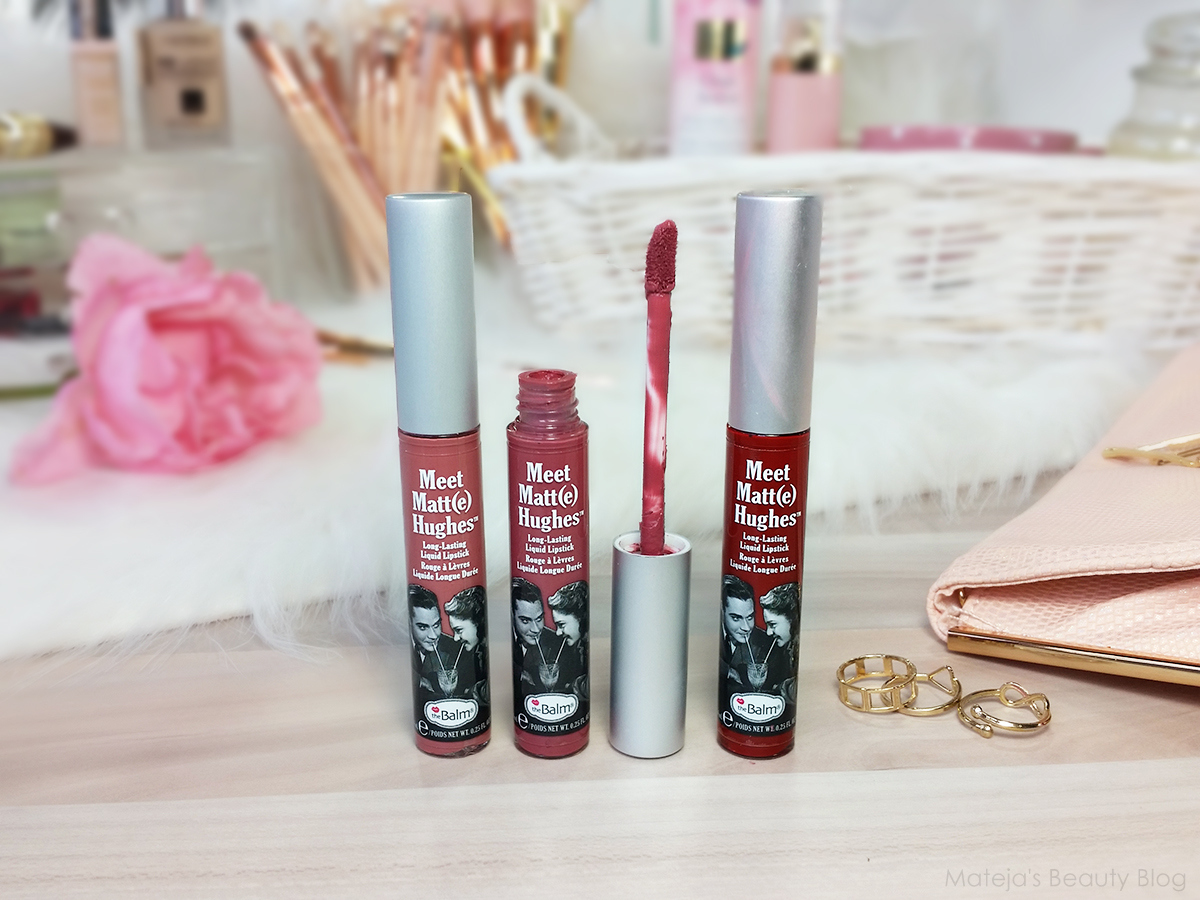 Texture: Compared to Adoring, Charming and Committed have a faster drying formula, meaning they set a lot quicker to a perfect matte finish (in a few minutes instead of almost ten) and once they are dry, you can’t wipe them off with a finger, while Adoring smudges a tiny bit. It’s like an improved formula of Milani’s Amore which fades more evenly, is again perfectly matte, but doesn’t feel quite as a layer on the lips and it doesn’t budge or smudge. For me these are the best matte liquid lipsticks I’ve tried (though I hadn’t had a chance to try those super popular ones like Sephora’s, Stila’s or Kat Von D’s). When I was wiping off swatches from my arm, these are significantly more long-lasting and very difficult to get off with a makeup wipe, especially Adoring leaves a stain as well. These are all quite creamy and less thin/liquid than for example Sleek or Makeup Factory versions and all are very pigmented. 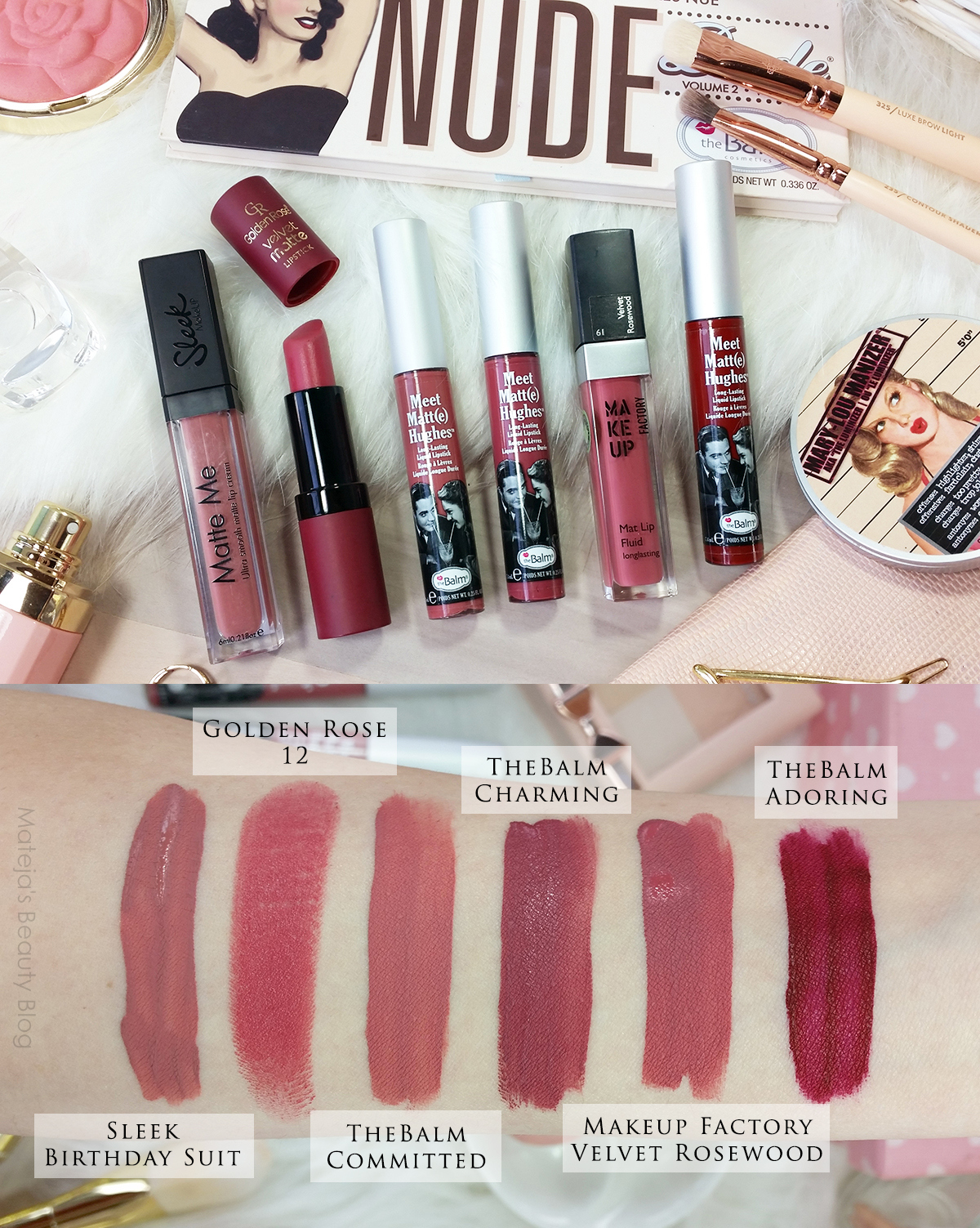 First thing that surprised me was that the shade is darker than I imagined (I ordered online). It’s still that classic muted natural rosy shade, but it’s a shade darker than Makeup Factory’s Velvet Rosewood, so against my pale skin it’s already not a natural-looking shade. It’s also a bit less warm than my other such similar shades, but it still manages to look rosy enough of my complexion without looking too draining or even violet, and I actually like the tone of it better than Velvet Rosewood. This is a shade that is better suited for more medium skin tones if you’re searching for something natural looking, while on me it’s a 90’s grunge shade that is harder for me to pull off. 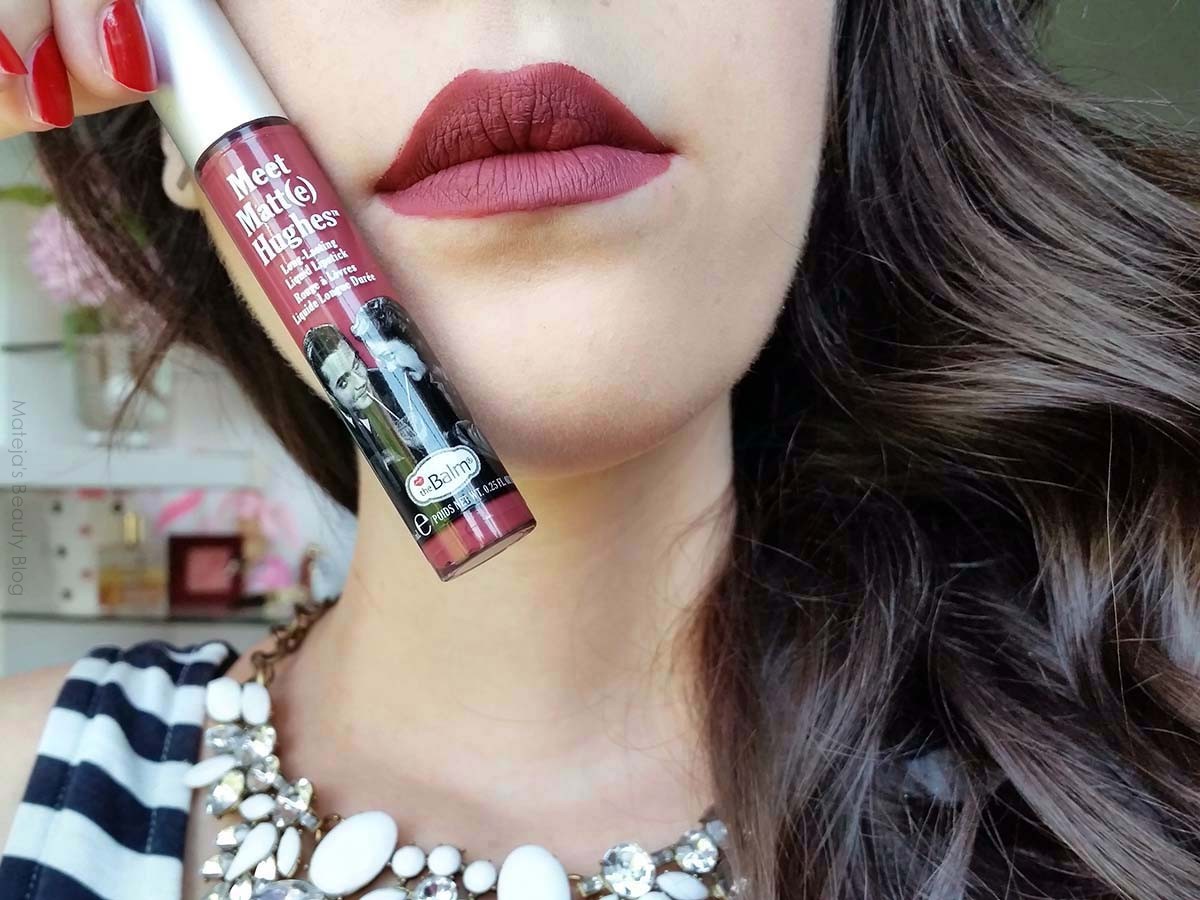 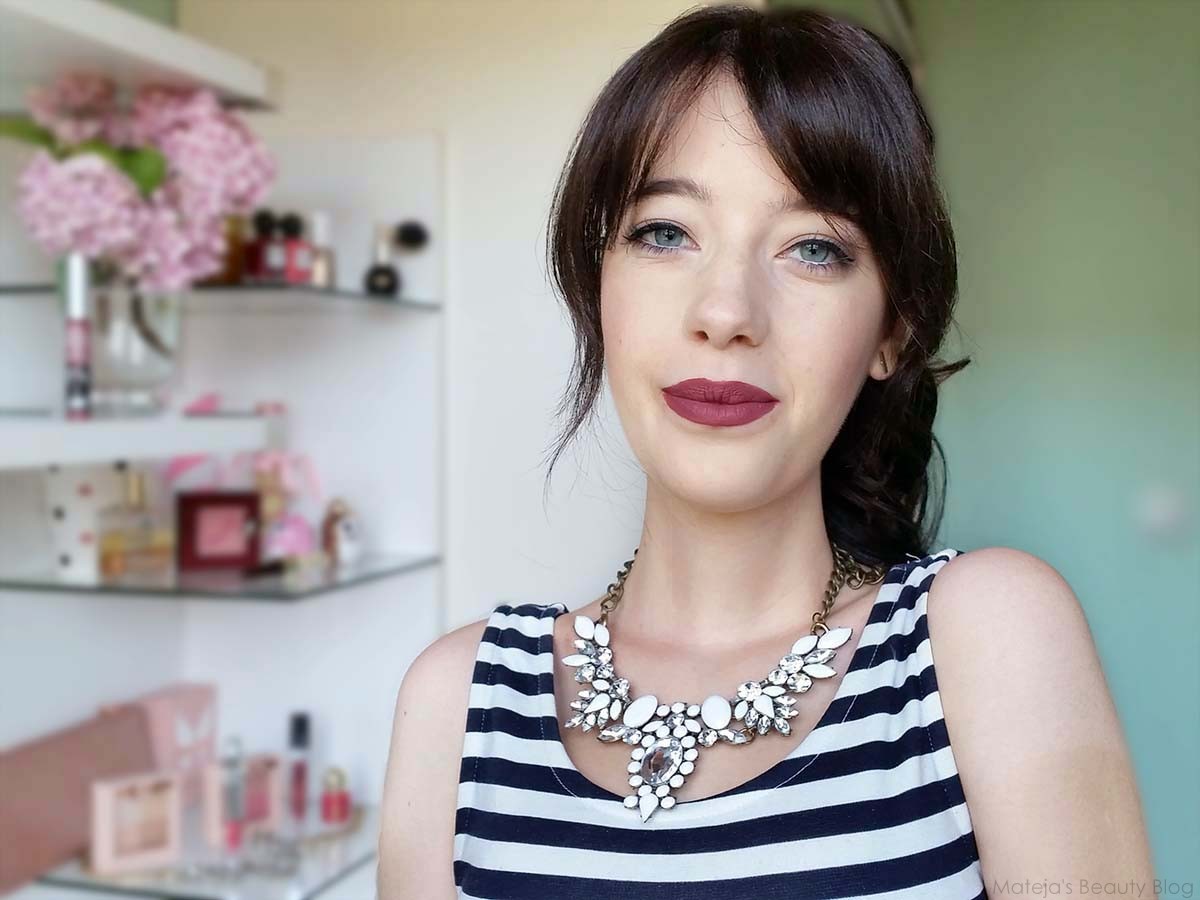 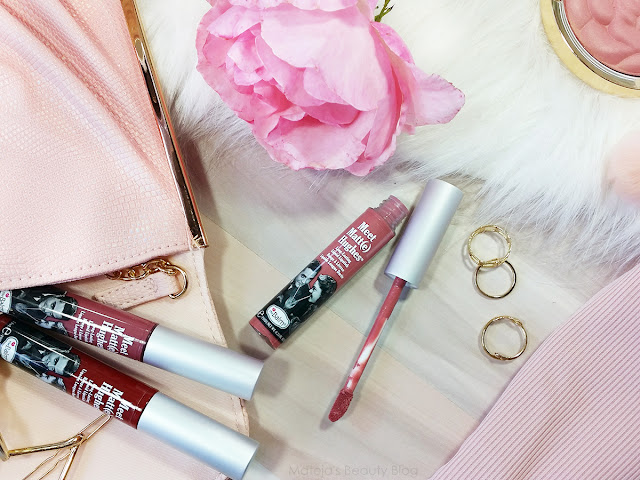 I was a bit worried about this shade despite swatching it in the shop, as I feared it’ll look too peachy on me, so I actually grabbed it last minute before leaving the shop because I just said to myself screw it, let’s risk it anyway. Boy, am I happy I made that choice because it’s perfect in my eyes. It’s similar to my natural lip colour, but a shade darker (my lips are very pale) and it’s a very difficult colour for me to describe to you. It’s a nude-natural shade that is a mix of everything from peach to muted pink and a tiny hint of mauve that keeps it from being too warm. I just love it so much. Closest shade I own is Sleek’s Birthday Suit, but Committed is peachier and less brown looking (Birthday Suit oxidizes to a more brownish-mauve shade). I also want to point out that I gave this shade to try to someone with a slightly darker skin tone than mine and it looked like a different shade, as it was a bit more mauve. 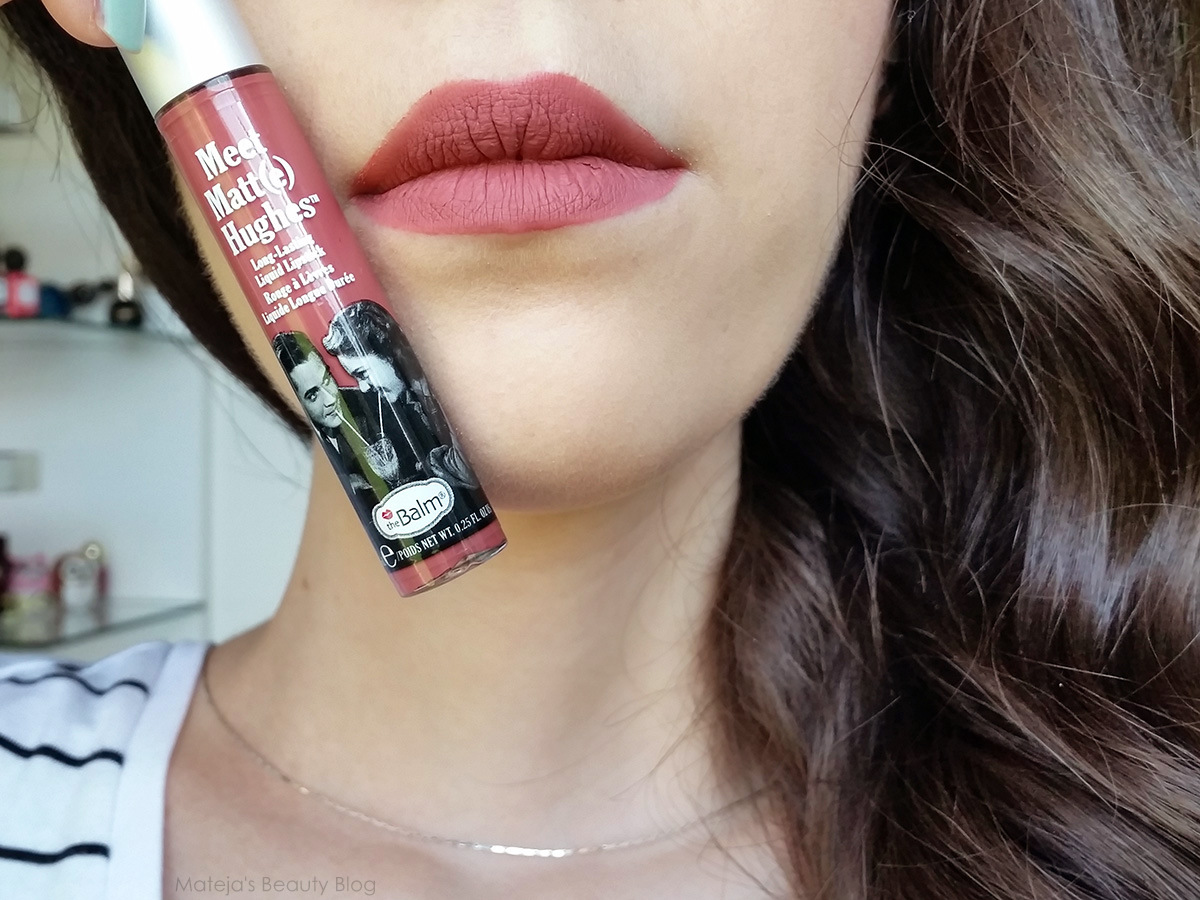 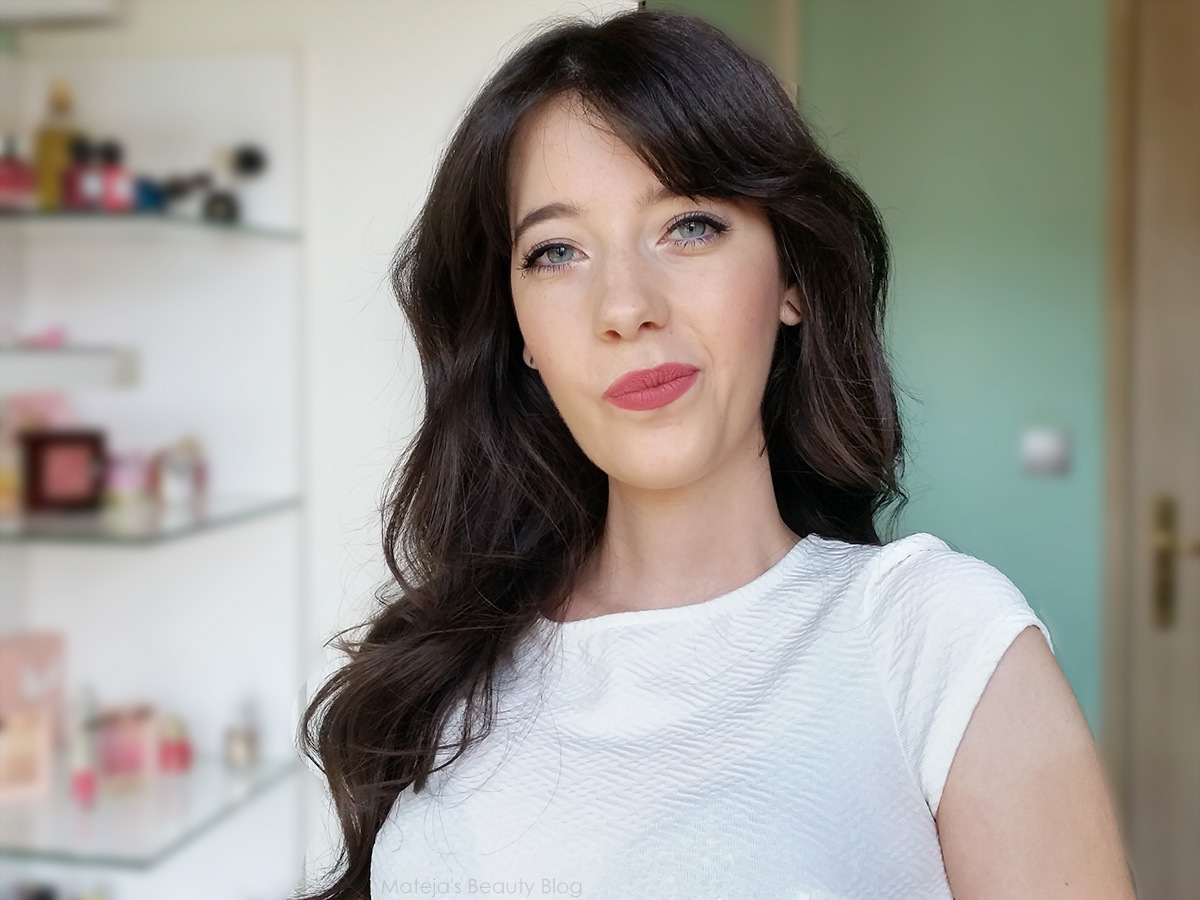 Staying Power: Staying power of both is excellent, but not as good as Adoring, this is of course due to the shade. All nudes obviously fade faster than burgundies, but Committed still manages to cling on for several hours and just for example today I had a very greasy breakfast, and the colour survived almost intact. It wiped off in the inner corners, but the rest was still perfect and after 6 hours it still looks the same. Charming has a similar staying power than Adoring, since it’s quite a dark shade on me, so it’s very long-lasting. Neither get tight or uncomfortable on my lips, but I can’t asses how they’ll behave on people with more dry lips – given they they don’t dry to a layer like Sleek’s, I assume they are more comfortable.
Scent: Hughes all have an mint chocolate scent like After Eight and tingle at application for that alleged plumping effect, but I actually like it. 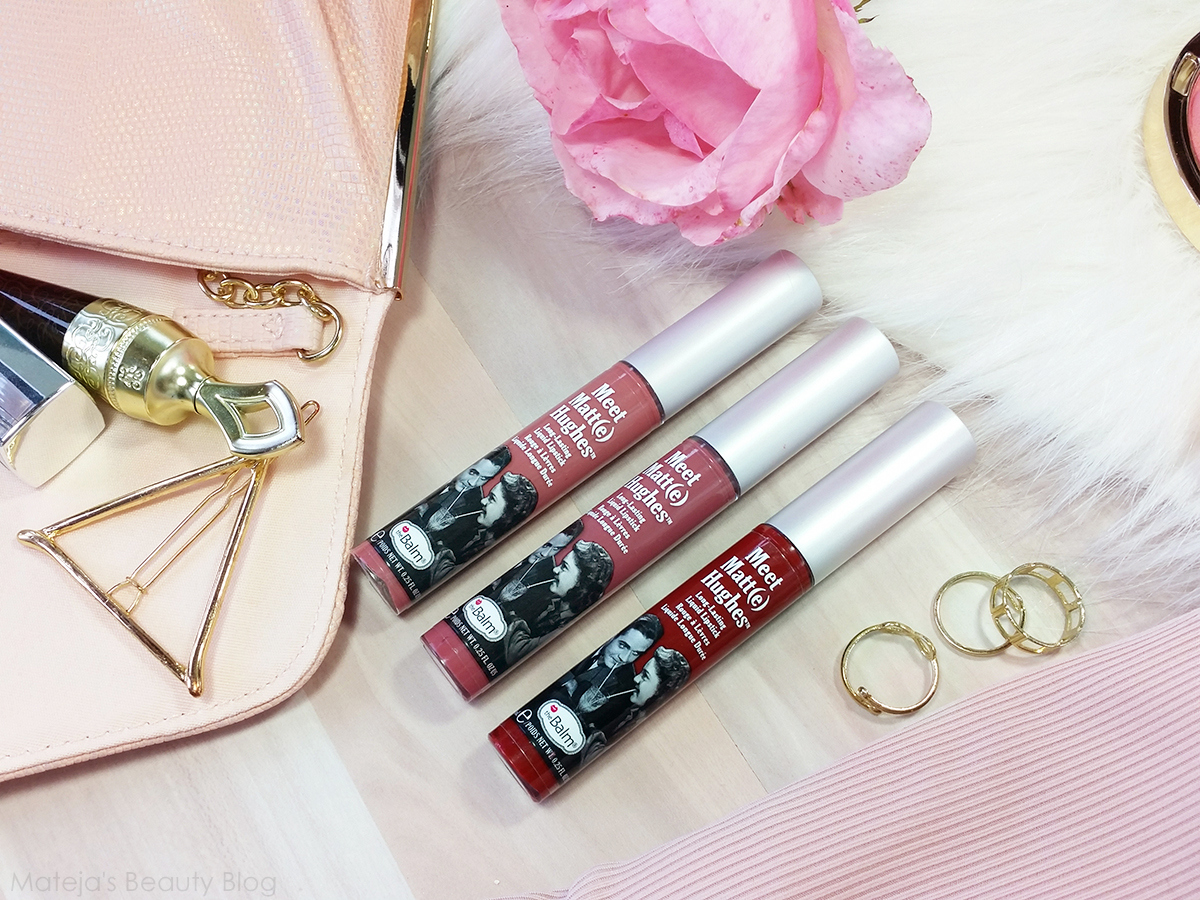 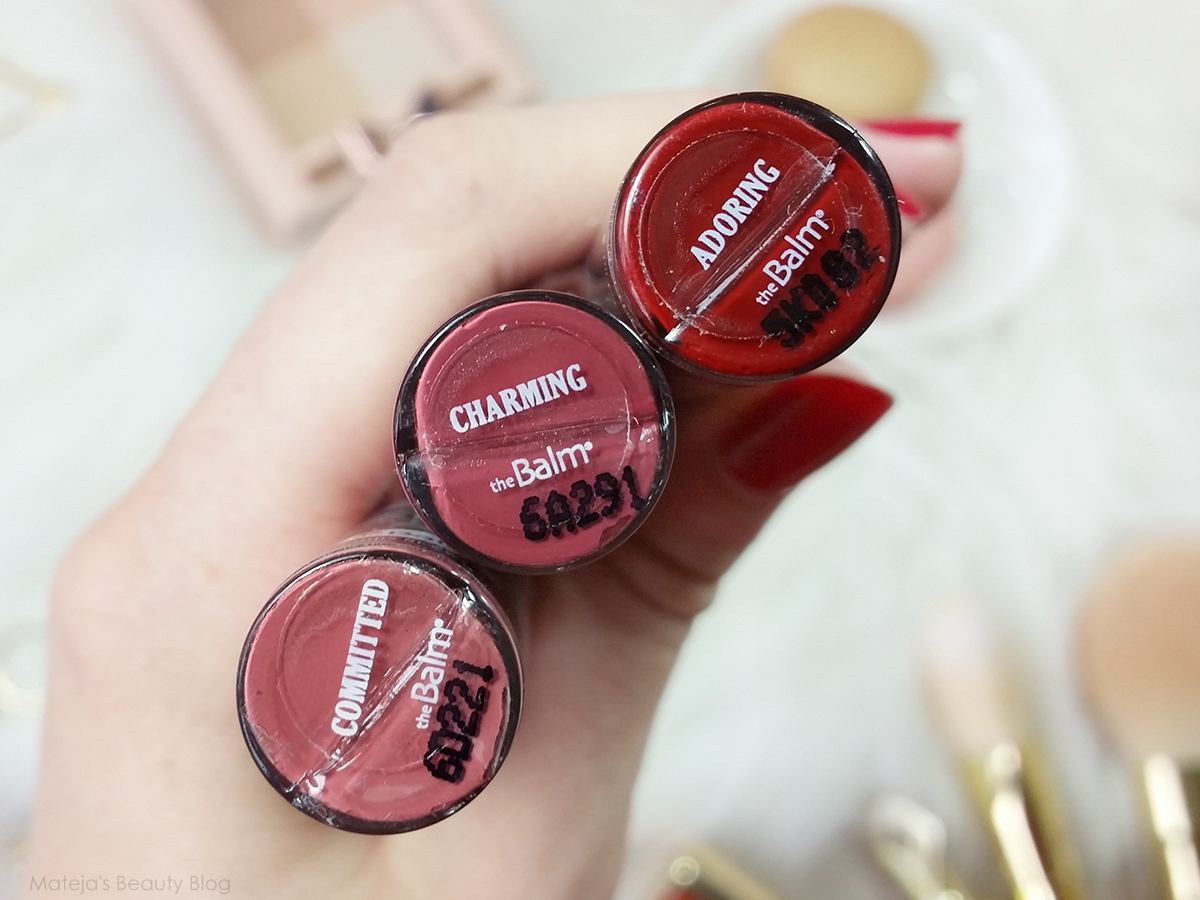 Packaging: These come in a simple tube with a doe foot applicator. They have a retro inspired picture, which is actually quite cute. Sometimes there is too much product on the applicator, but I don’t think it’s because the stopper is too wide, as since the excess product is always on the tip, I assume it’s because it’s a thicker lip cream than usual.
Price and availability: I got two of the shades from Salma for 16.50 €, while I bought Committed in Müller where it costs 19 €. 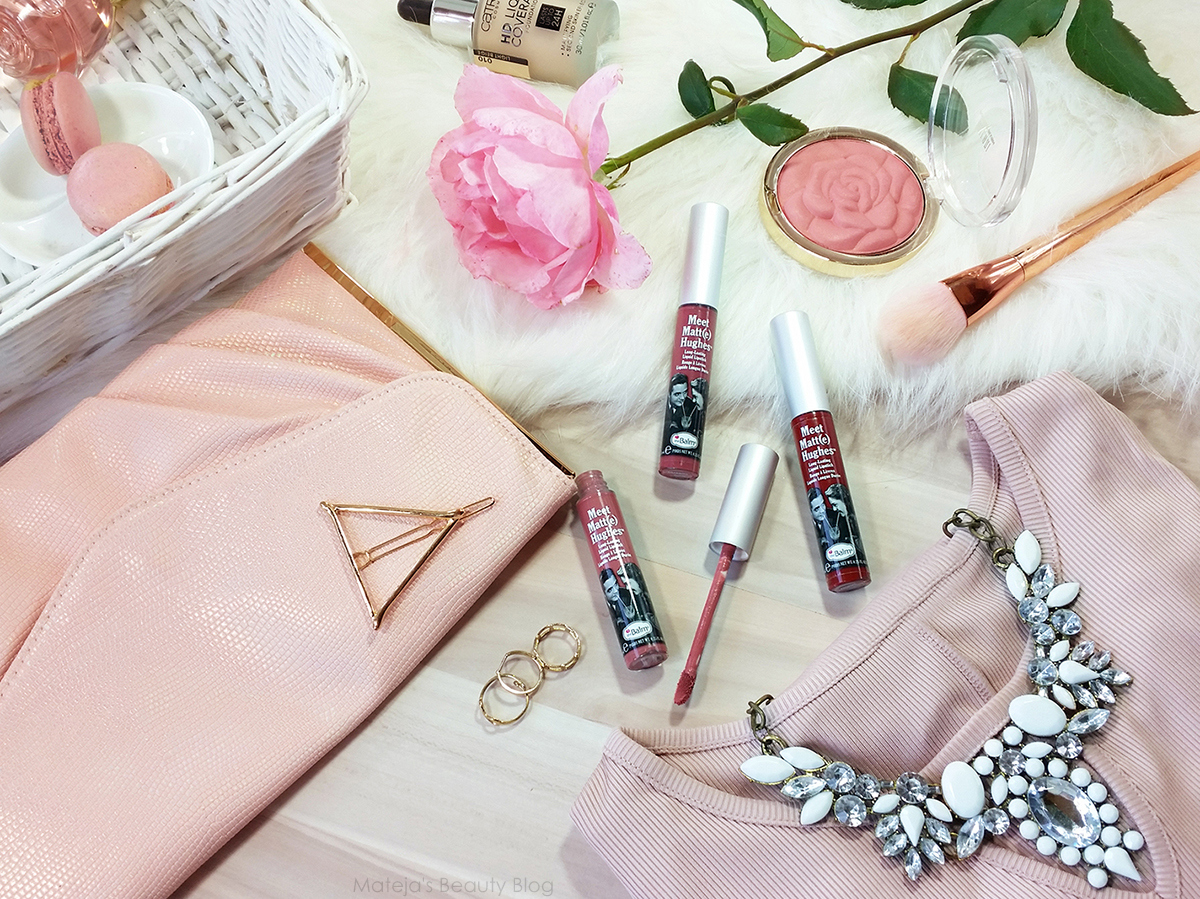 Getting more shades only cemented my belief that these are some of the best matte liquid lipsticks out there. They are not the cheapest, but if you get a shade that you know you’ll wear a lot, they are completely worth investing in, especially if you’re a fan of proper Instagram matte finish and want great staying power. Honestly compared to for example Sleek’s, which were some of the first matte lip creams, these are noticeably a lot better, so if early attempts of liquid lipsticks put you off, these might change your mind.
Have a great day!