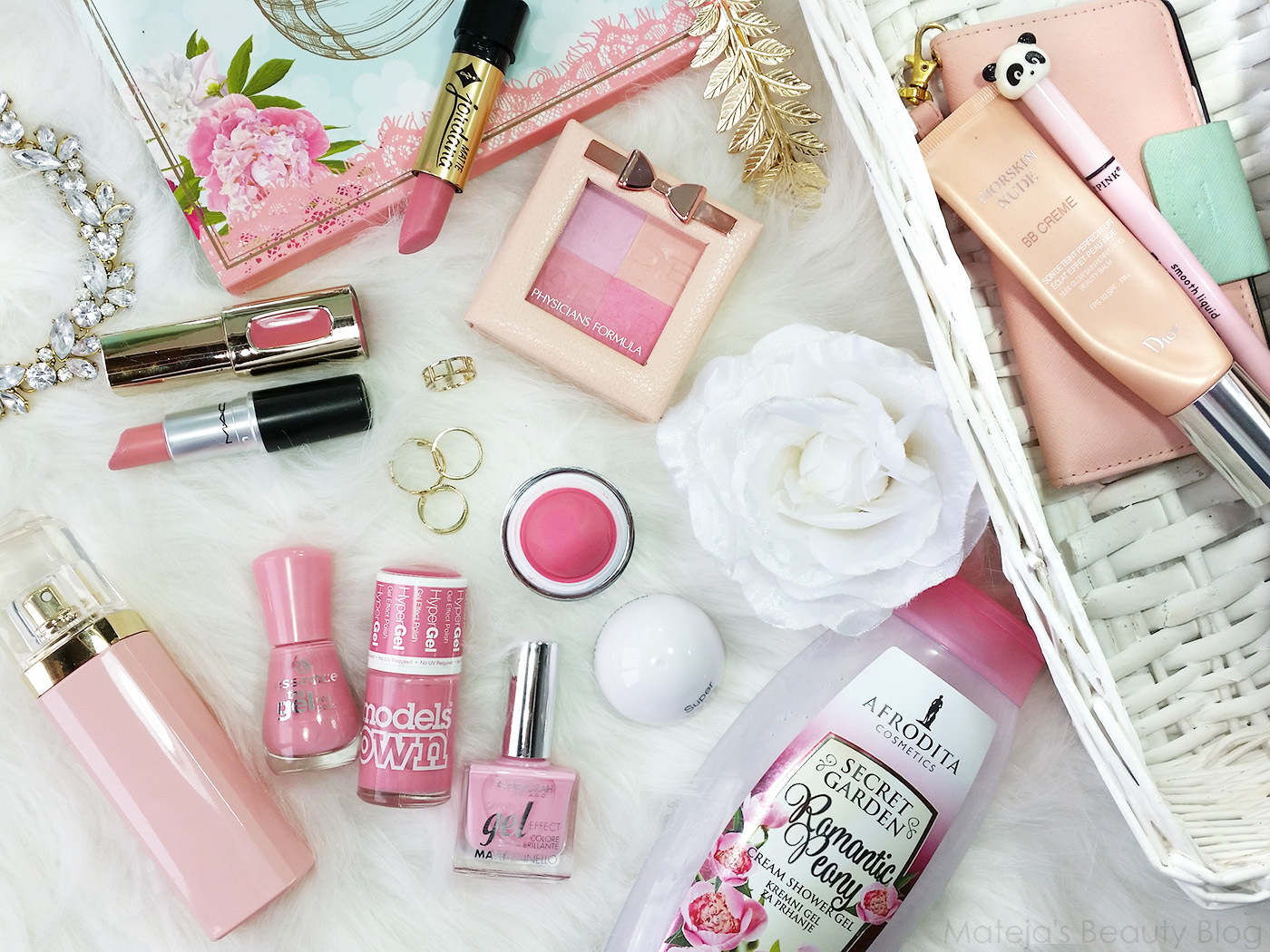 Last September I did a post about red shades and this year it’s pink. While red brings glamour to the look, pink hues are a lot more varied and diverse. You can be cutesy girly with pastels, the one who wants to be noticed with bright magentas or do the glamorous look with a twist by painting your lips into a darker pink shade. I again created three looks, which were originally created for the other blog, but they weren’t posted (really hoping only yet). Anyway, I planned to post it here simultaneously, since so much of my time was invested in it and I loved the results, but I did re-shot some of the pictures just for this blog, which include even more pink products. This has been sitting in my drafts for a few months now, since June to be exact and I could have waited for the pink October, but lets do September instead and I’ll do more autumn inspired posts then. 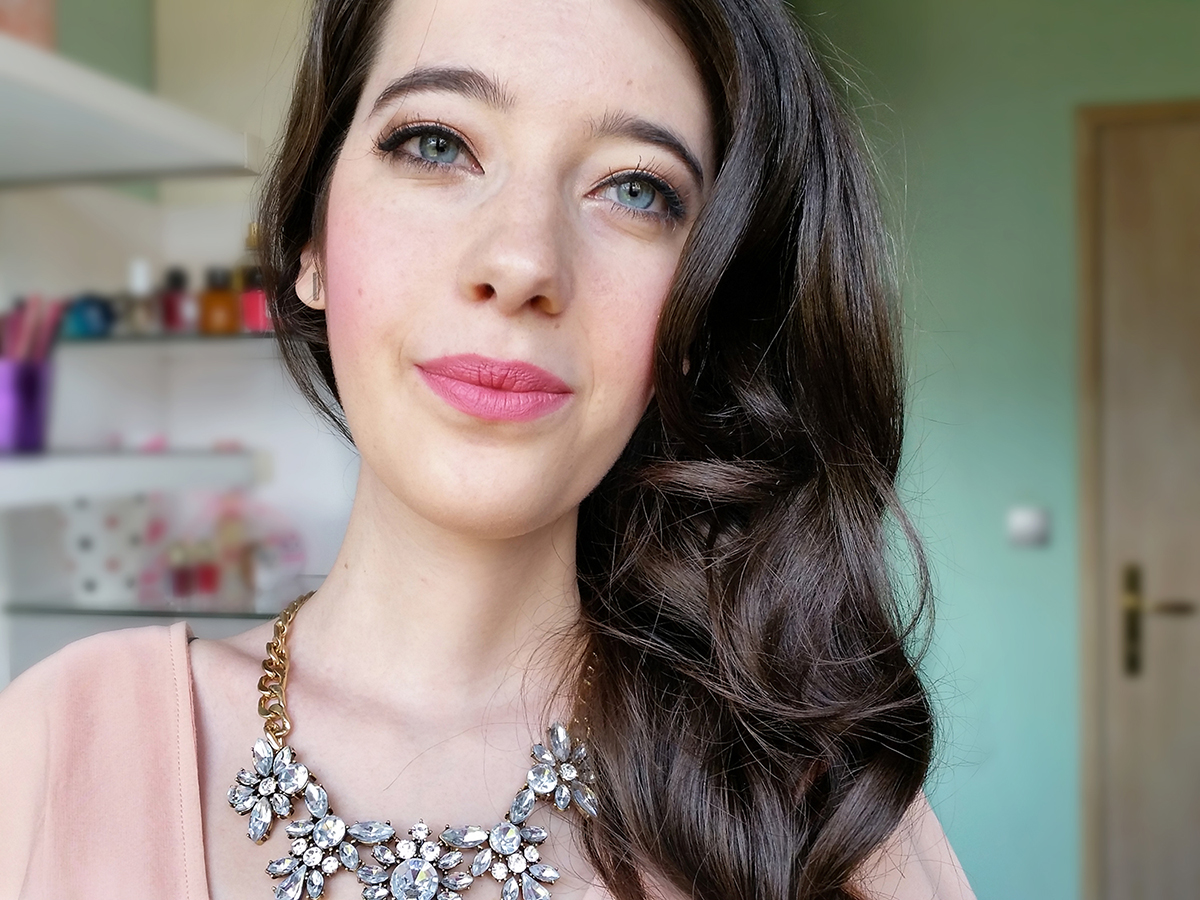 Romantic pastels
Pink pastels are some of the easiest shades to pull off as long as they don’t have too much of a white base, especially when it comes to lip colours. You can easily create a porcelain doll look or something more everyday and office appropriate. For my look I used a pale cool toned pink blush by Physicians Formula called Glowing Nude in shade Rose, since it’s actually my only such shade and it really creates those baby doll cheeks that will suit especially those with a very pale skin tone like mine (though I have tried in on darker skin than mine and it looked great). A similar shade I own is again by Physicians Formula called Super BB Cheek & Lip Balm the shade Berry Pink. 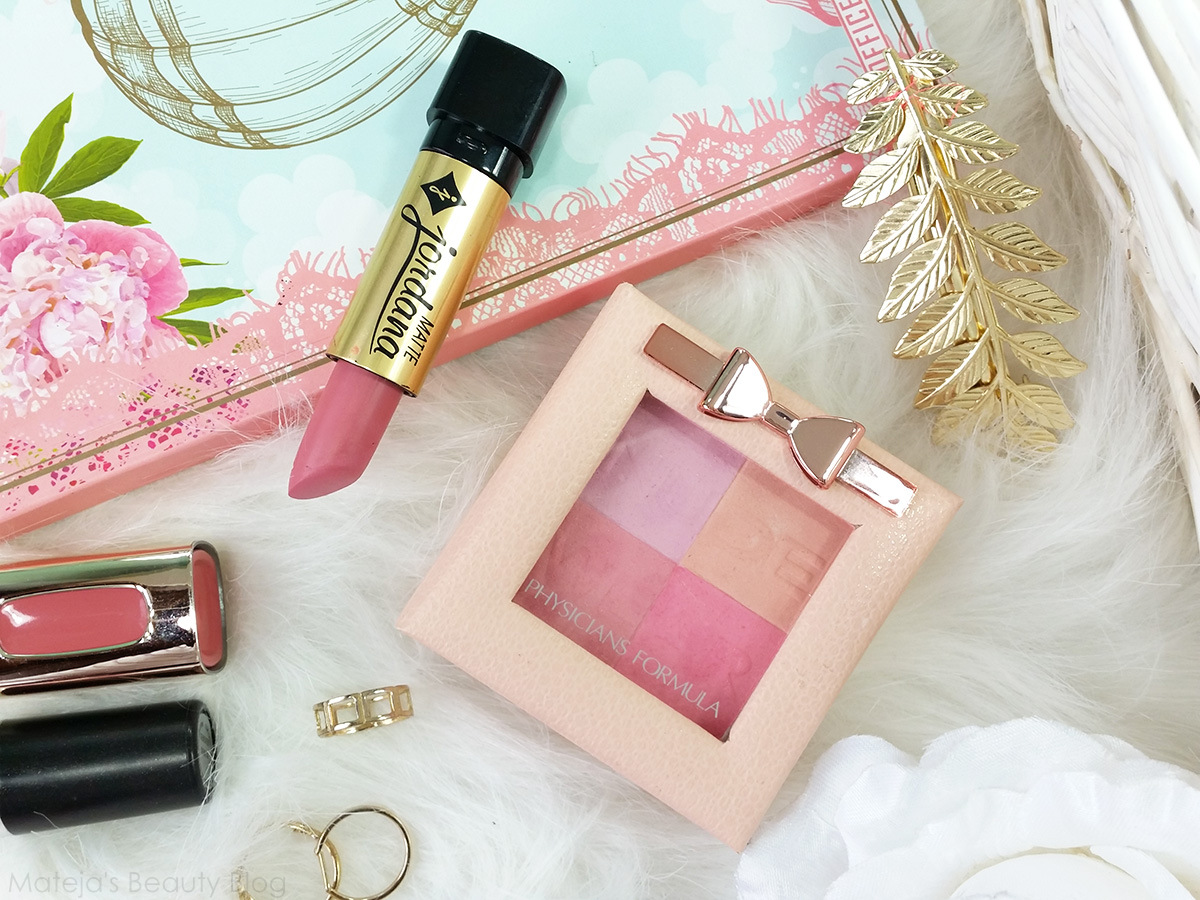 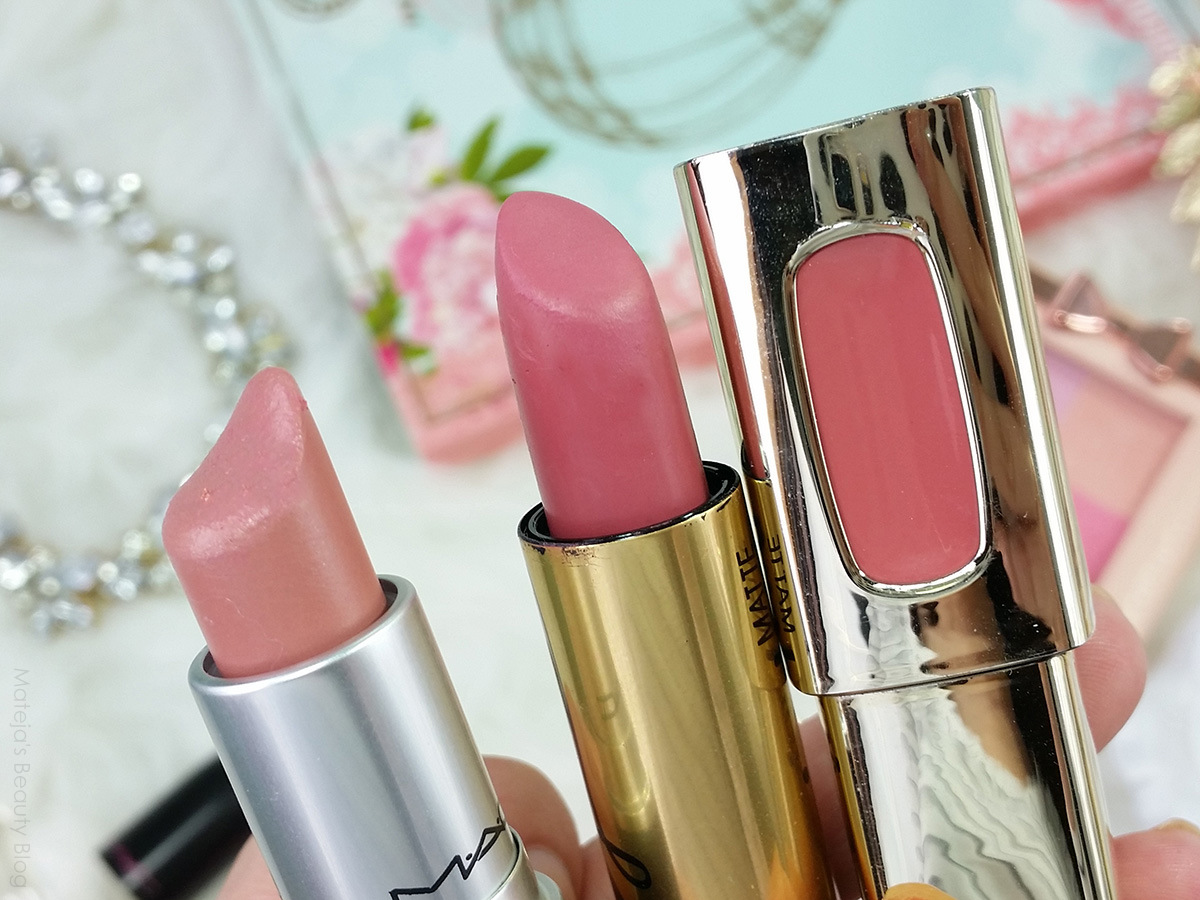 I combined the blush with Jordana’s Matte lipstick in Pink Passion, which is actually a dupe for Mac’s Please me as well as Essence’s lipliner in Wish Me a Rose, so it’s actually quite a common shade, but a truly beautiful light pink with a warm undertone. My other recommendations for a pastel pink pout are NYX Soft Matte lip Cream in Istanbul, Mac’s Creme Cup lipstick,  L’Oreal L’Extraordinaire Liquid Lipstick 101 Rose Melody and Bourjois Contour Edition lipliner 02 Cotton Candy. 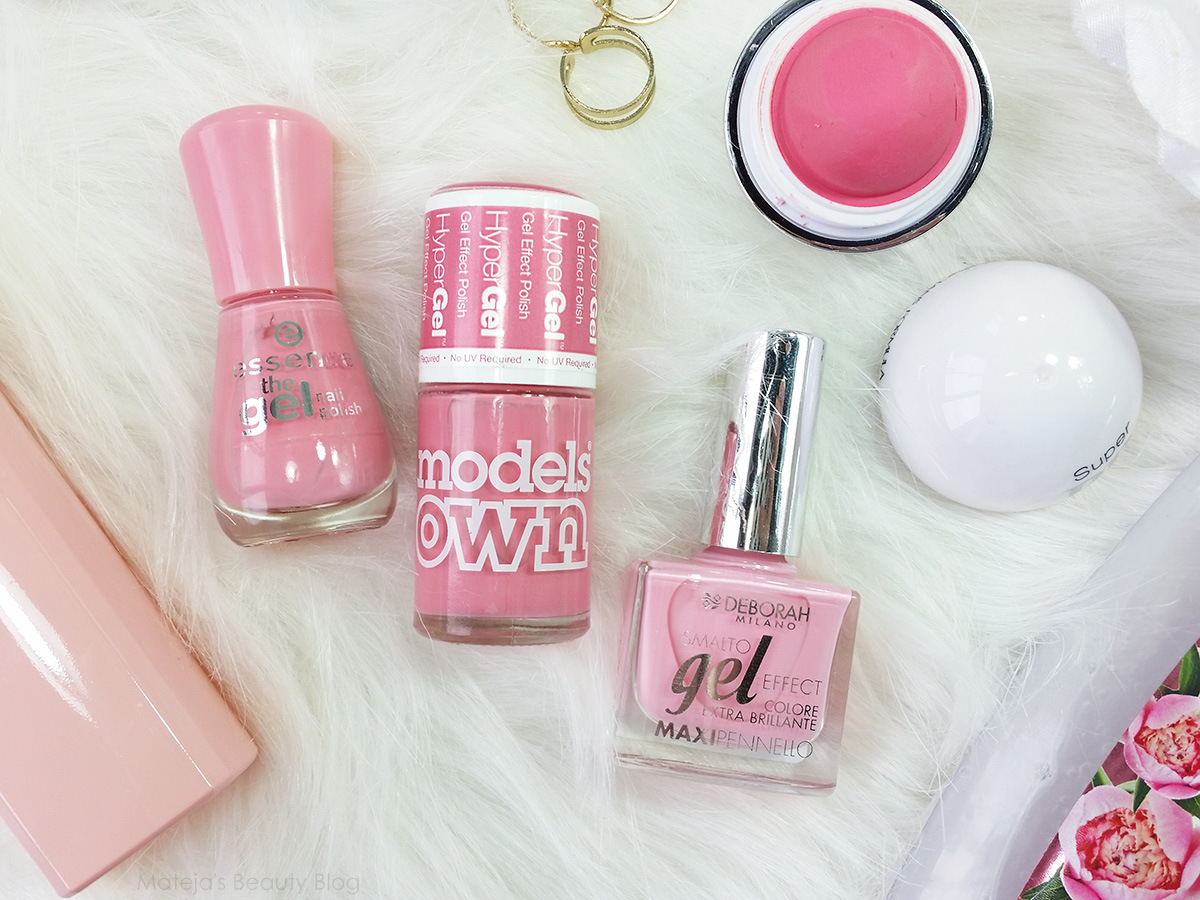 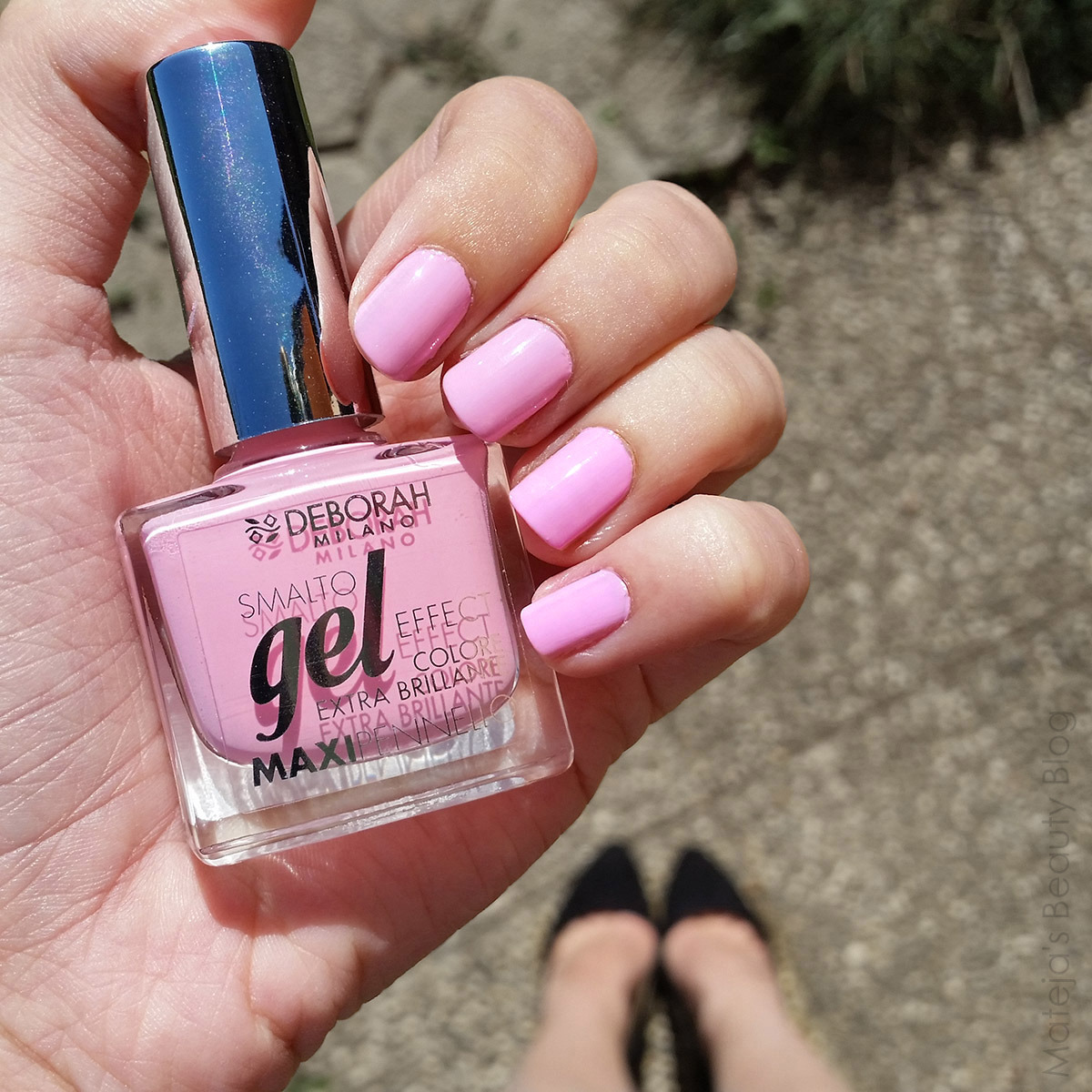 For the nails I picked a pastel cool-toned pink Deborah’s Gel Effect in 49 Peonia pink, but a good choice are also Essence’s Gel Nail polish in 13 Forgive me and Models Own Hypergel in Cashmere Rose. 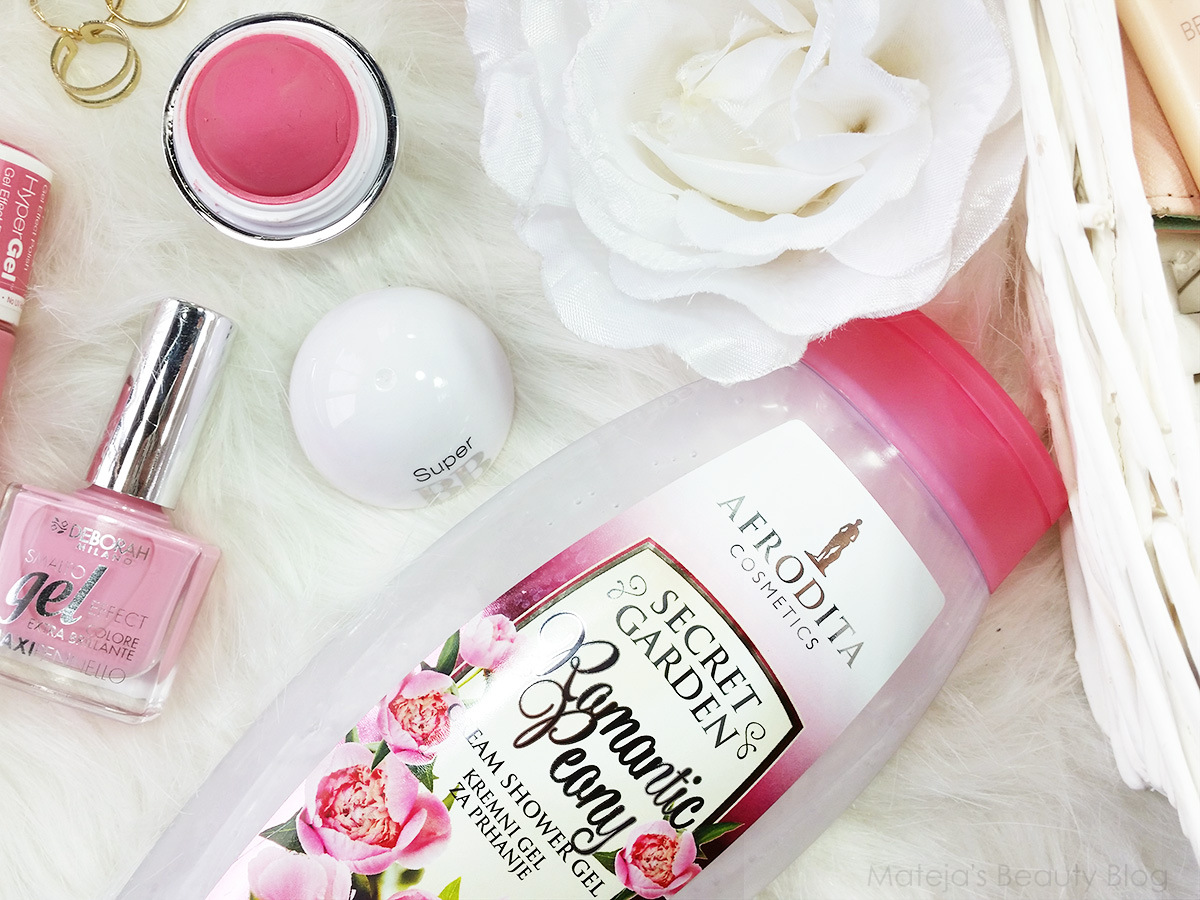 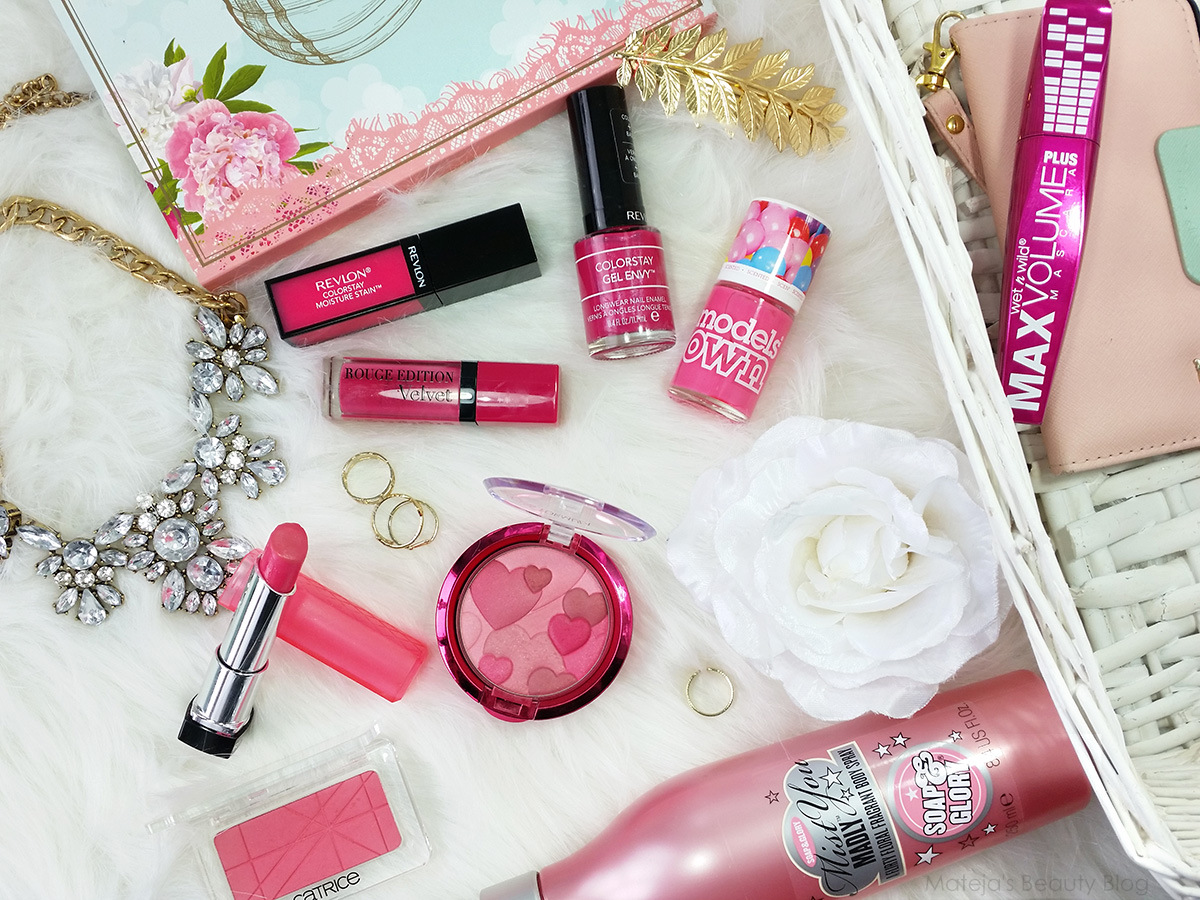 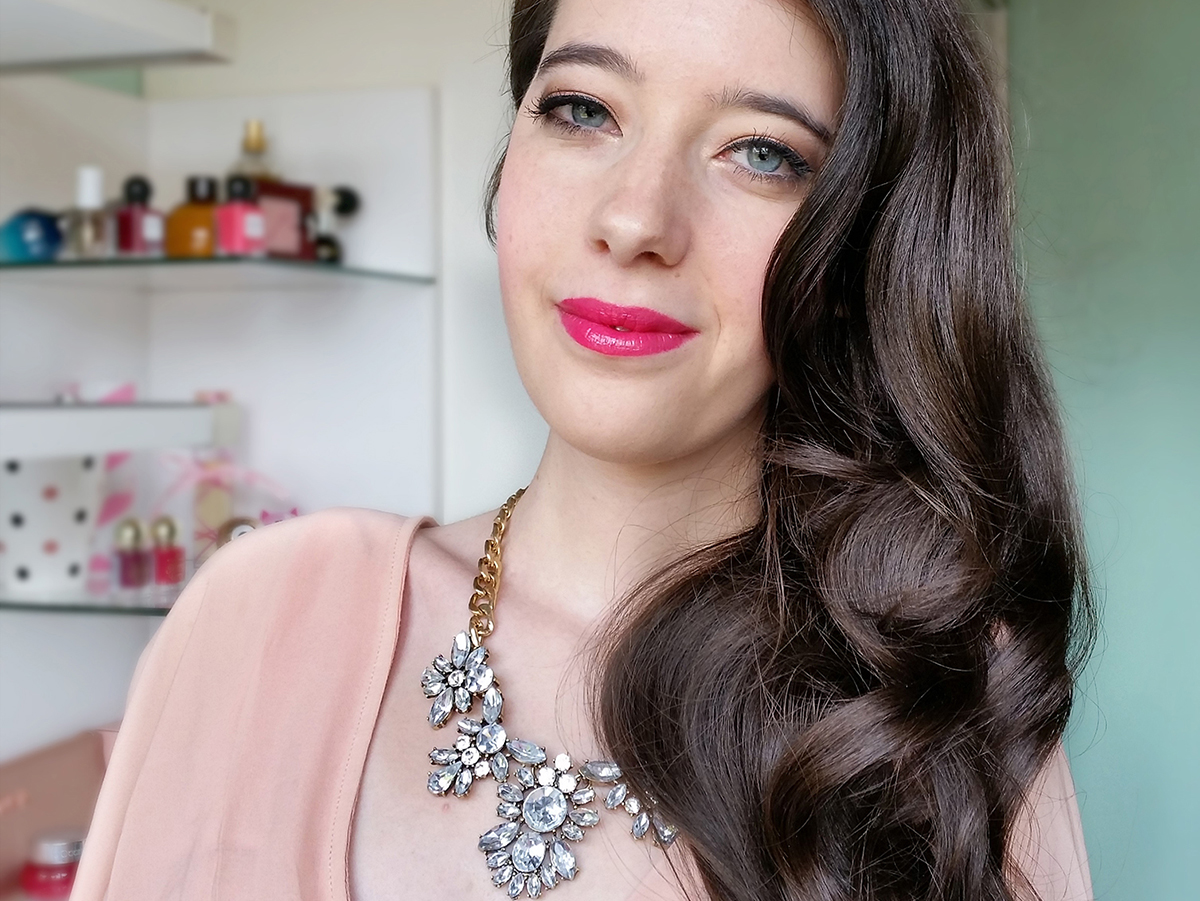 Usually loud medium pink shades, in particular those with a cool undertone, are popular mostly in summer months when we dare to wear more colour. To avoid looking like an 80’s aerobic model with too much blush, combine a gentle pale blush with a bright pink on the lips and vice versa, but never wear both bright versions at once. I chose to wear again Physicians Formula blush, this time a medium warm pink Happy Booster in Rose and on the lips it’s a bright warm pink Revlon’s Moisture Stain in Rio Rush. 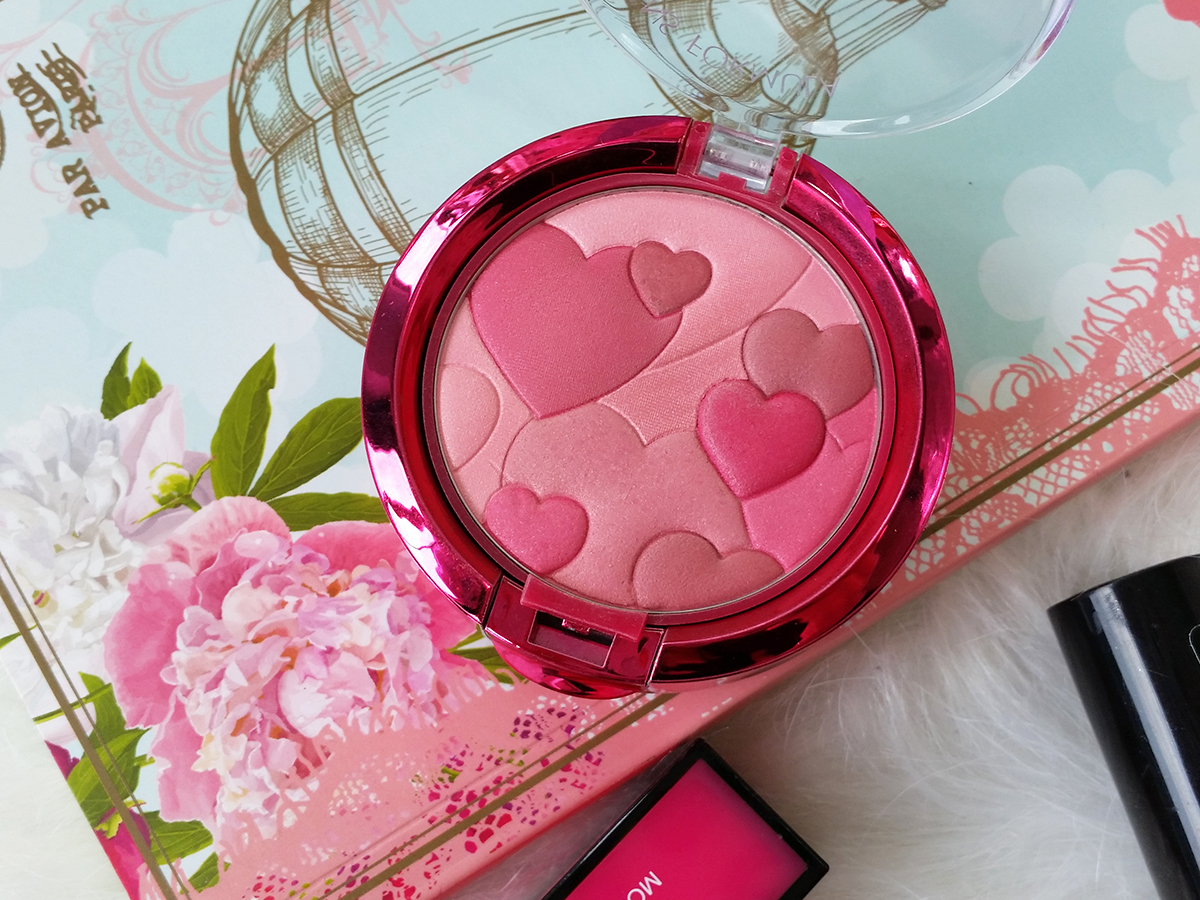 For the cheeks I have a few cheaper options – both Catrice Defining Blush in Think Pink (medium warm pink) and Essence’s Matte Touch blush in Berry me Up! will fit me bill quite nicely, while for the lips great options are also Revlon’s Colorbust Lip Butter in Sweet Tart and the űber bright Bourjois’ Rouge Edition Velvet in Pink Pong (if you can’t get Bourjois, Jordana’s Sweet Cream in Cherry Cobbler is very similar). 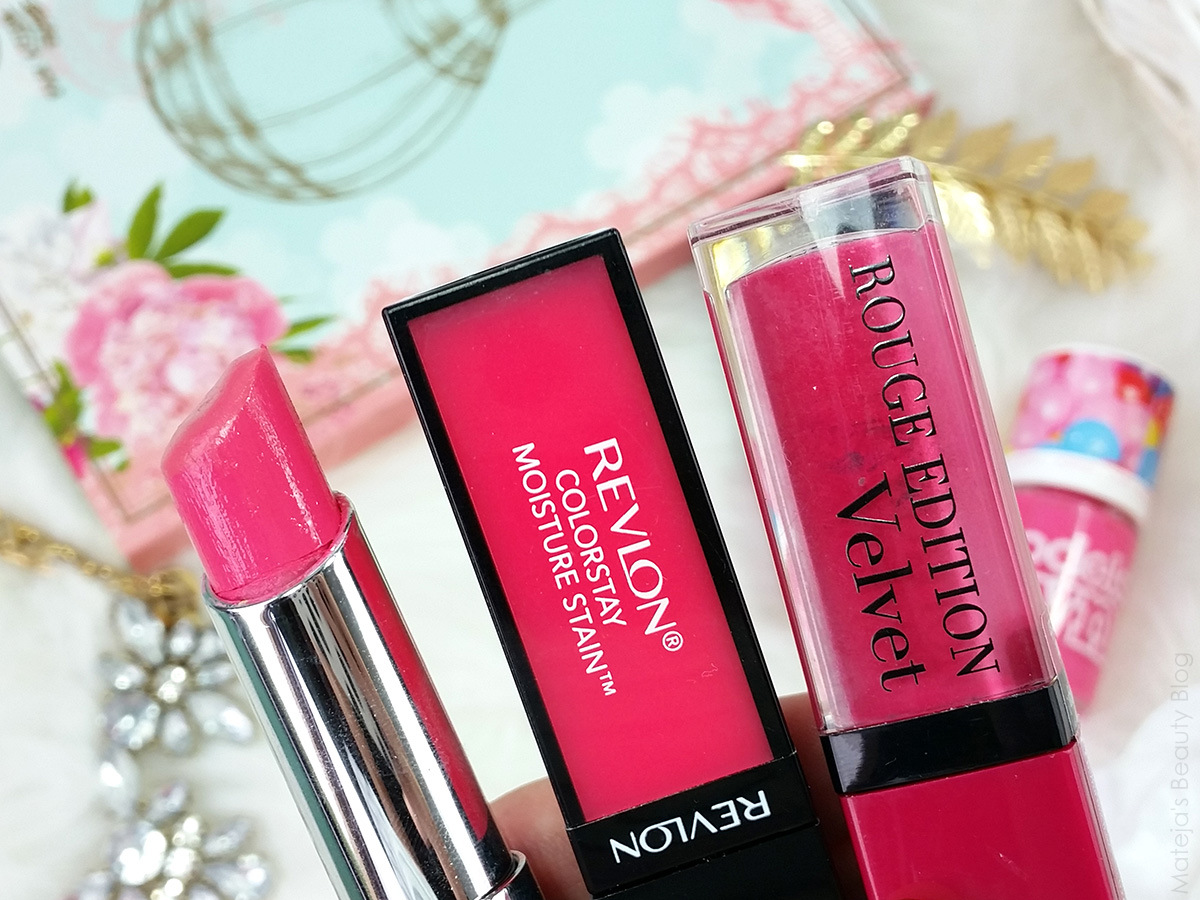 For the nails I picked Revlon’s Colorstay Nail Envy in Royal Flush, which is a fuchsia shade with tiny blue shimmer that gives it a cool undertone. A lighter shade that would fit into this category is Models Own in Gumballs. 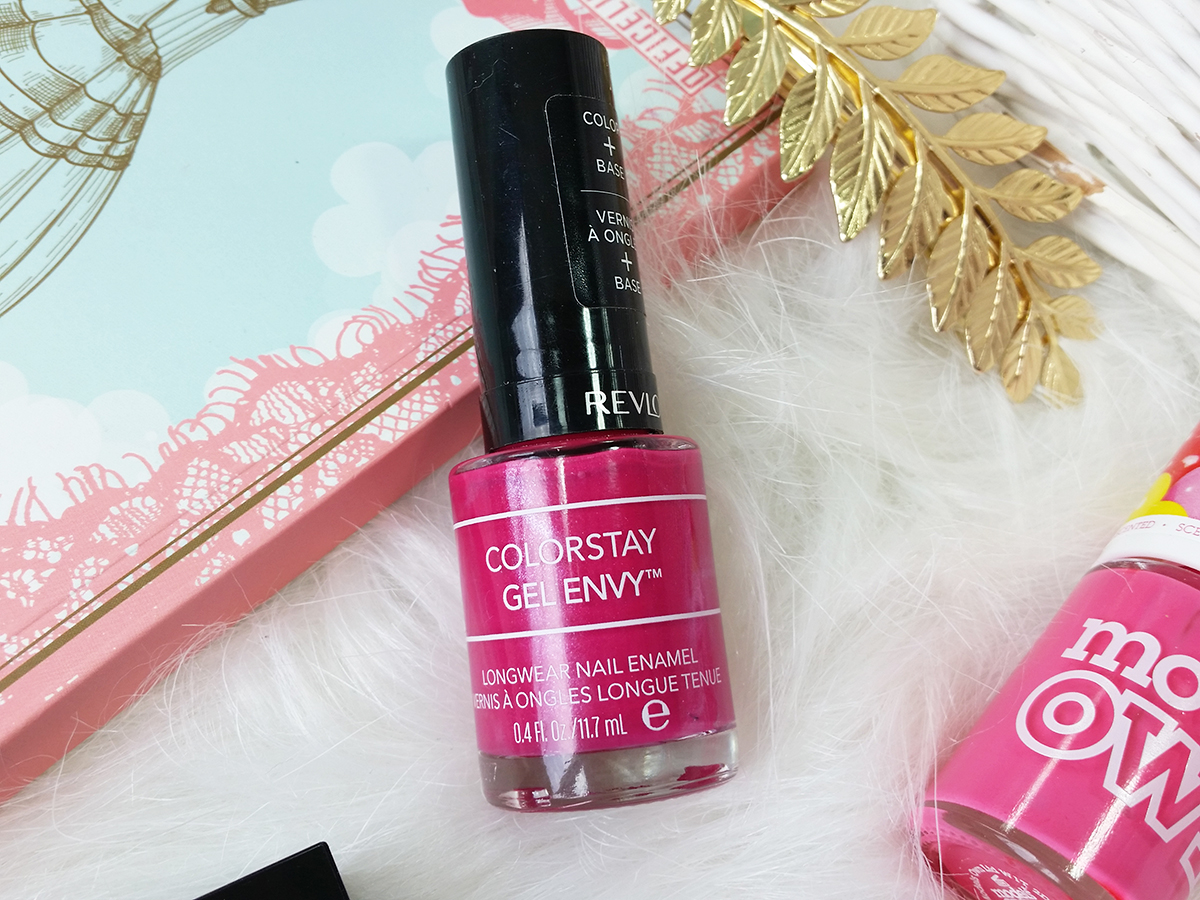 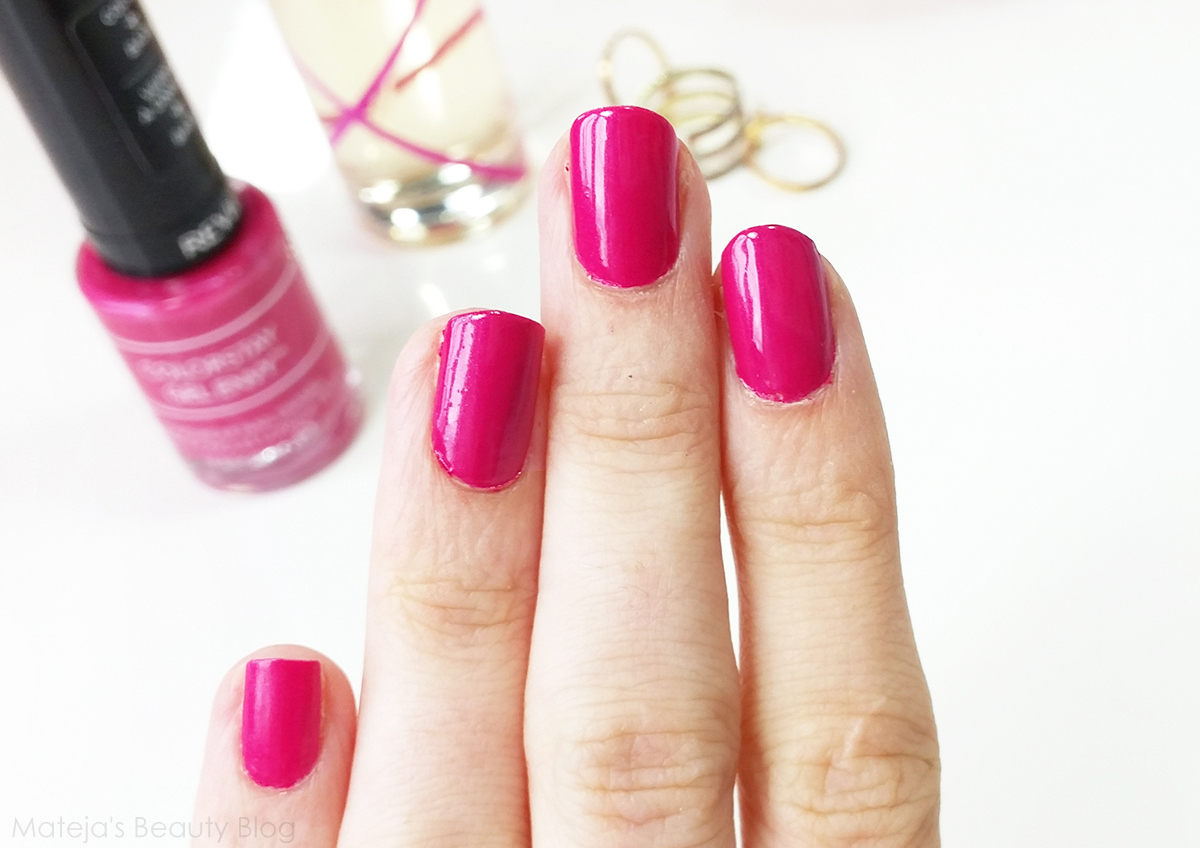 More products that at least have a pink packaging: Wet n Wild Max Volume Plus mascara, which is a very defining one and Soap & Glory Mist You Madly body spray that has a fab vintage scent (plus basically anything for the body by Soap & Glory).
Rich Berries 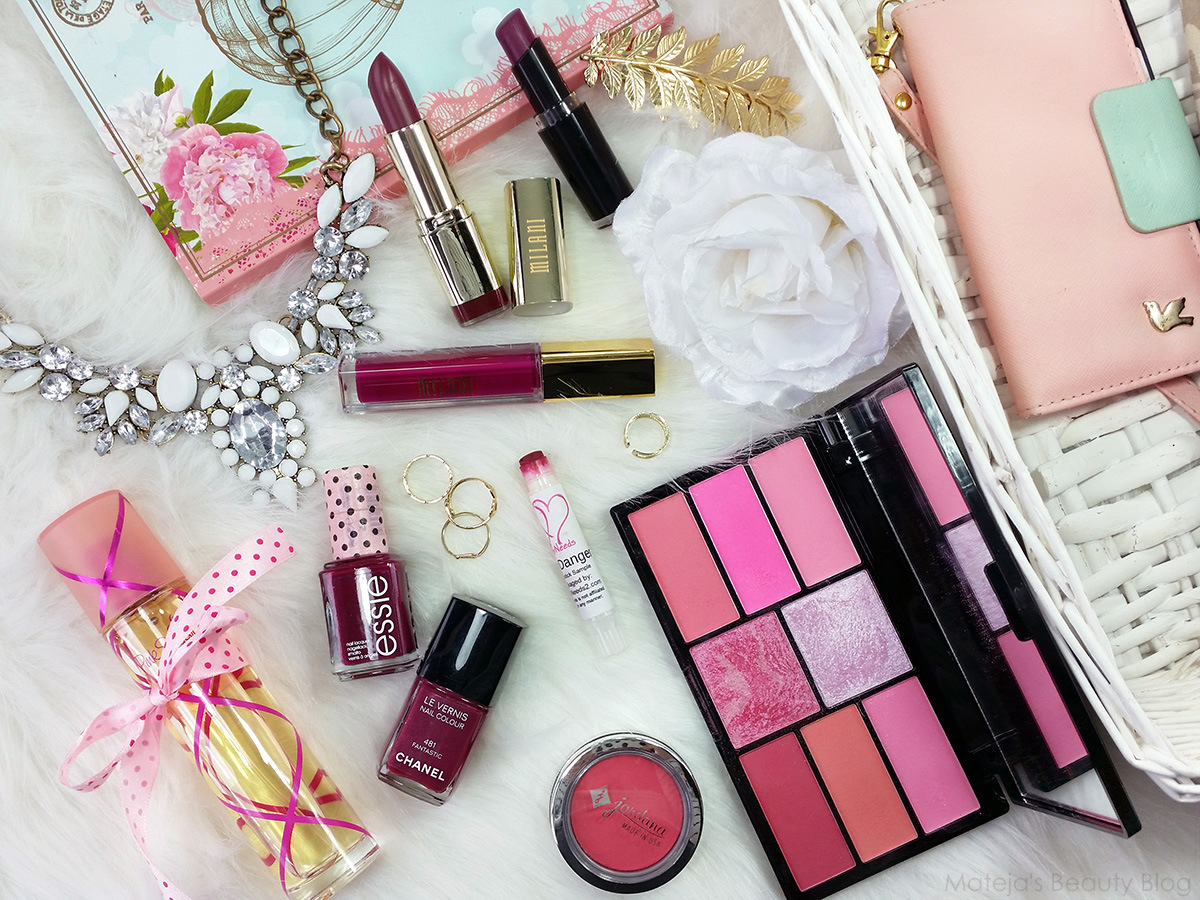 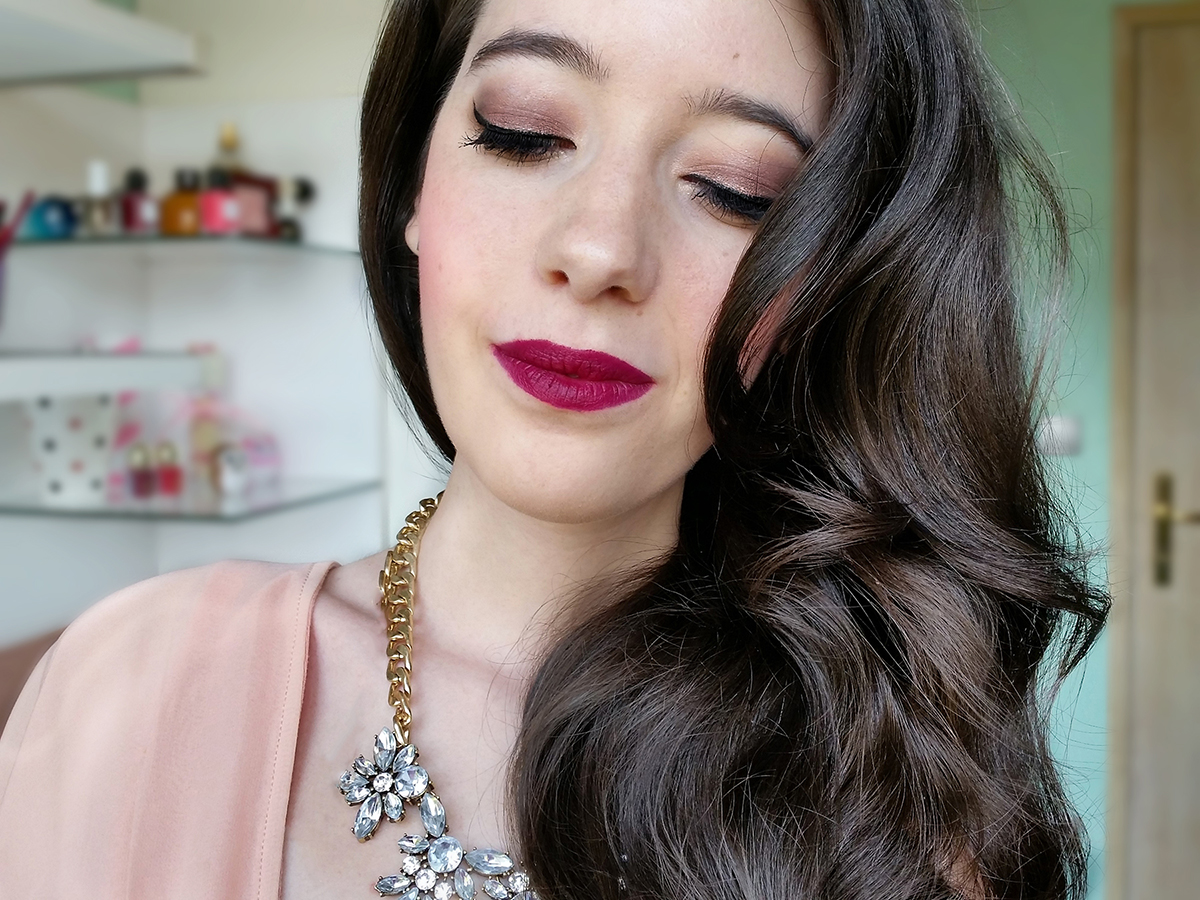 Admittedly a dark pink is always somewhat purple or burgundy, so this category will a bit more problematic, but I think I grabbed the right colours. It’s my favourite type of shades for my Snow White colouring, but it requires some bravery for those who aren’t that used to wearing a lot of makeup. Autumn and winter usually bring out in us a vampier side and we reach for that experimental darker shade that lies forgotten in the drawer for most of the year, but it’s a lot easier to wear a deep colour with heavier fabrics. 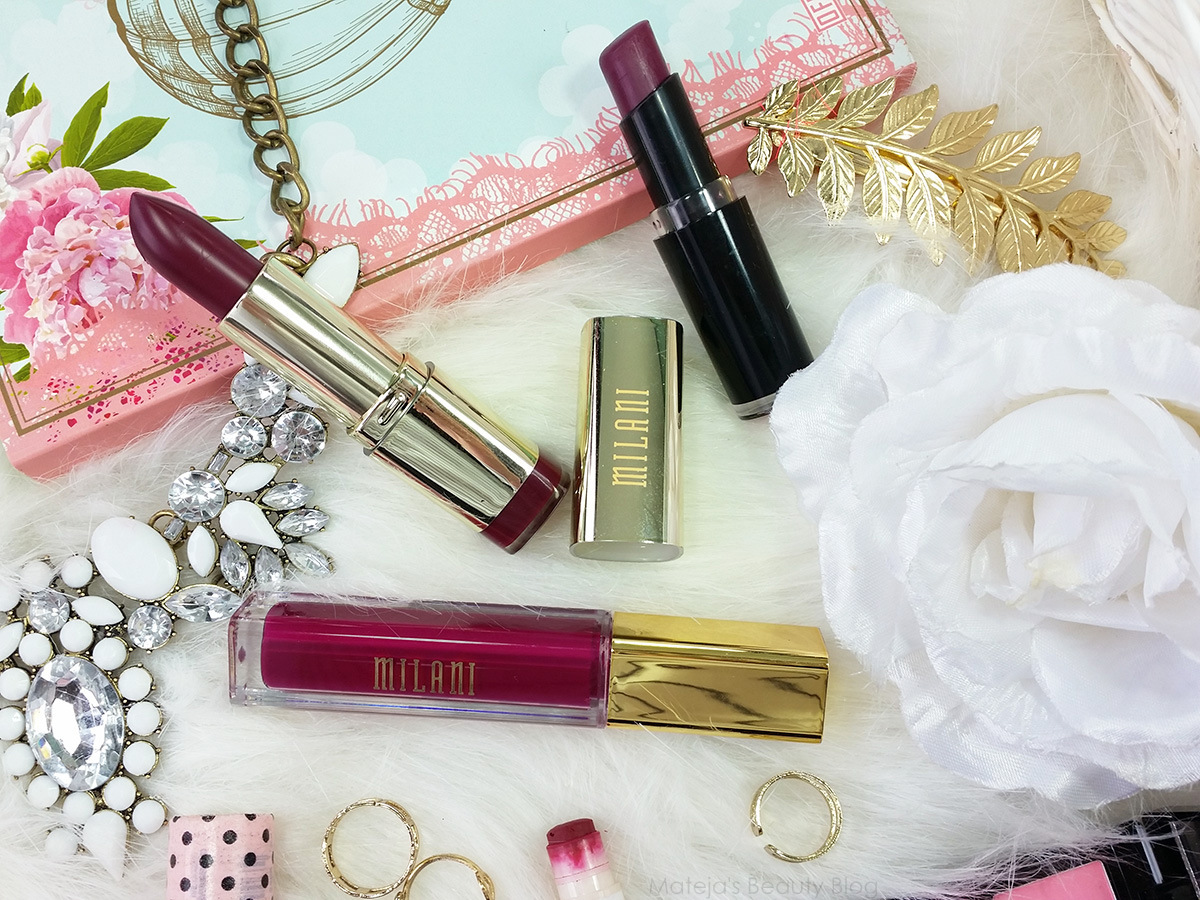 The star of the show in this look is Milani’s Matte lipstick in Flirty, a deep berry, though I could have swapped it for an even better choice also by Milani, Amore matte lip cream in Gorgeous. For those with a warm and a darker skin tone than mine shades like Wet n Wild Sugar Plum Fairy and Mac’s Rebel will be an excellent choice because they tend to look more pink the darker the skin is, while on me it’s more of a proper purple, so I prefer shades with more red like Mac’s D for Danger (still don’t have a full size of my favourite shade). On the cheeks I very lightly applied Jordana’s Powder Blush in Apple Cheeks, though I would swap it for something more muted in any other situation where I’m not showing you the blush. I can’t say I have many dark pink blushes, but Freedom Makeup blush palette contains some marvellous, very pigmented shades. Shades like Milani’s Red Vino would be perfect here, but I don’t have it. 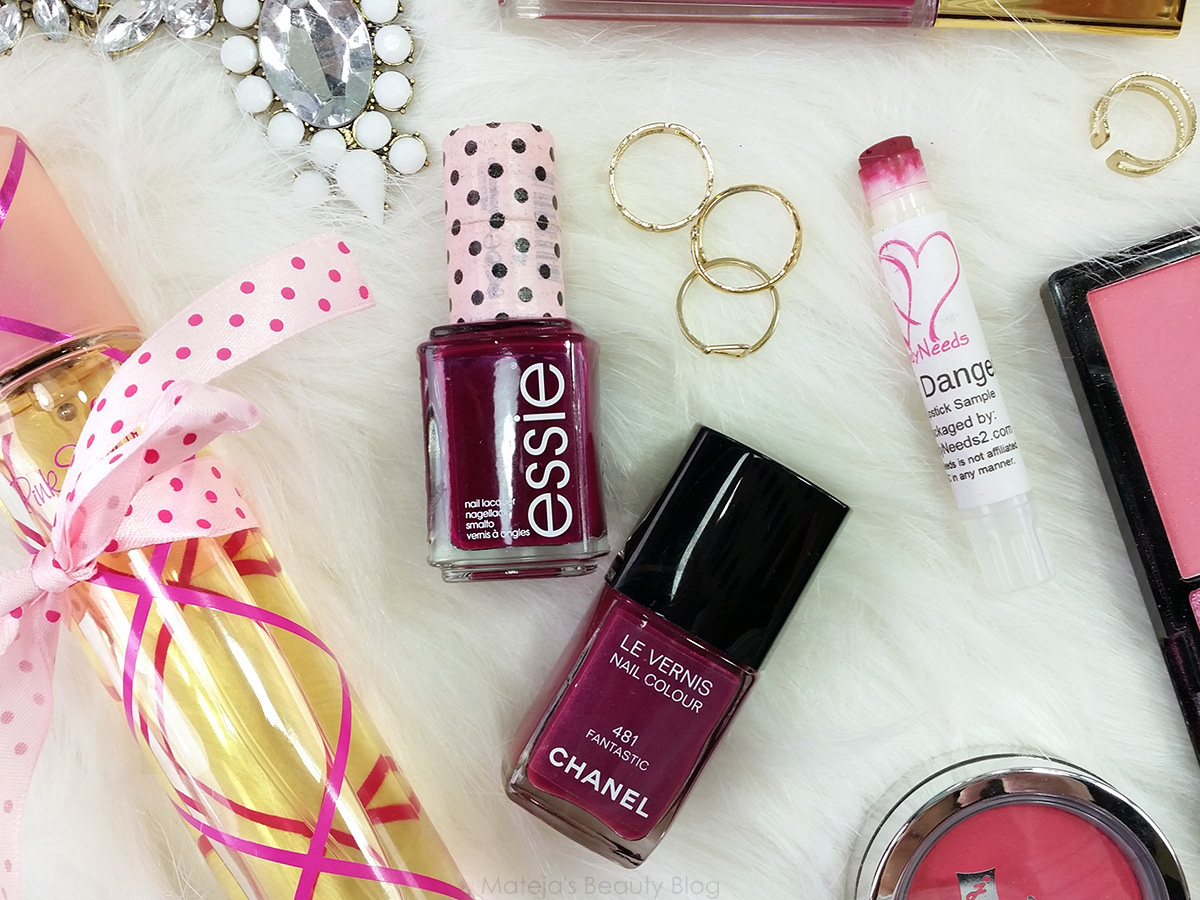 I hate to cheat here with a LE product, but the best choice in my eyes is Chanel’s nail polish in Fantastic. I believe Chanel released several such shades so far (April comes to mind), but I’m not sure what shades are available now. It’s deep pink-purple with some frost and I have yet to find a dupe, so if you have a recommendation, share it in the comments. But from the shades that are still available my absolute first choice is Bahama Mama by Essie, though technically a purple, but it definitely has a lot of pink tones to fit in this post. A more perfect shade would be the already discontinued Essence’s Be Berry Now, though I believe 10 True Love from the current The Gel Nail selection is similar (might look more red on some people). 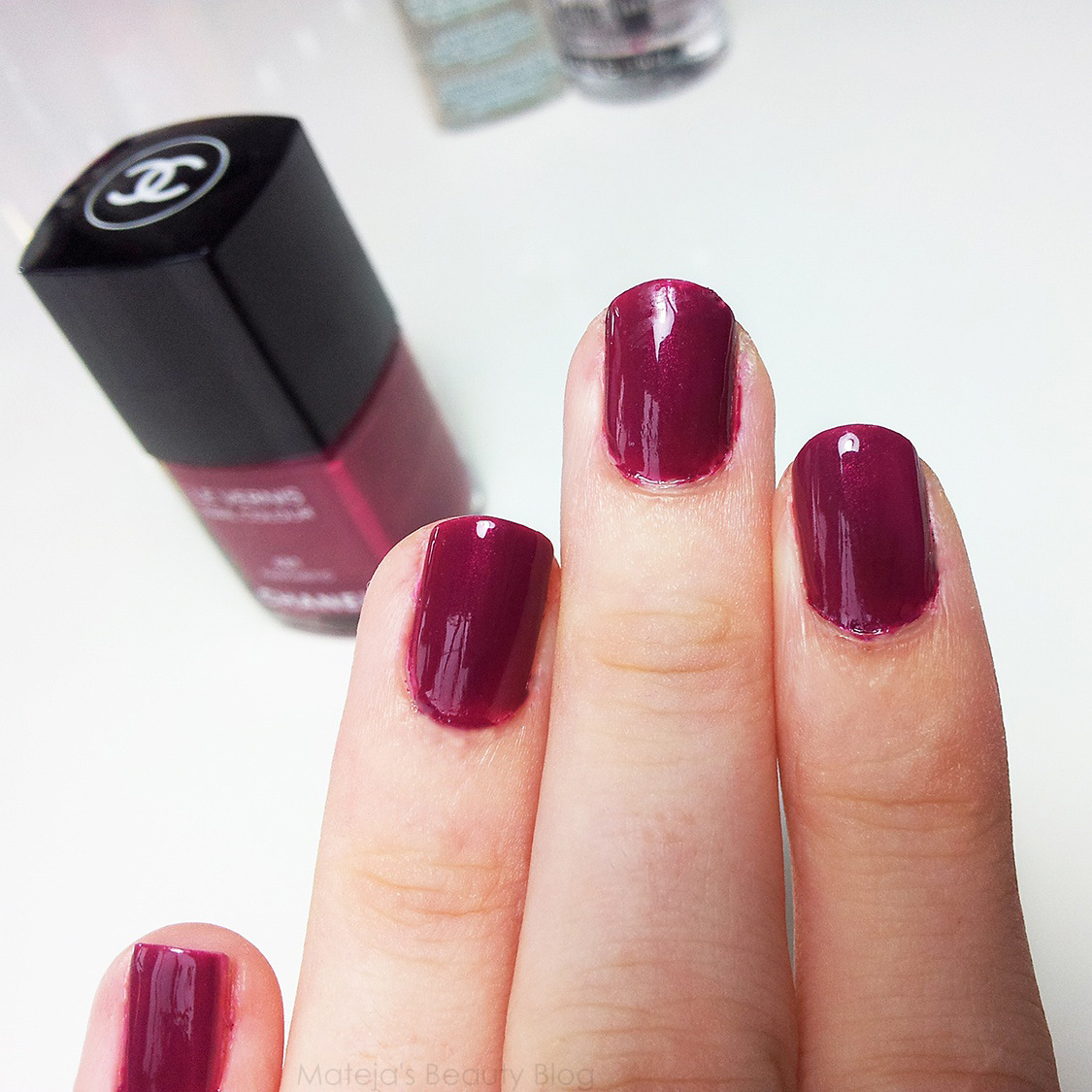 And for the last little bit, the pinkest of pink fragrances, I can’t neglect Aqualina’s Pink Sugar, which smells like cotton candy with tons of vanilla.
There you go, I just showered you with everything pink. I hope you enjoyed this post and have a great day!