You are here: Home / Bourjois / Vampy Lips – Burgundies and Berries 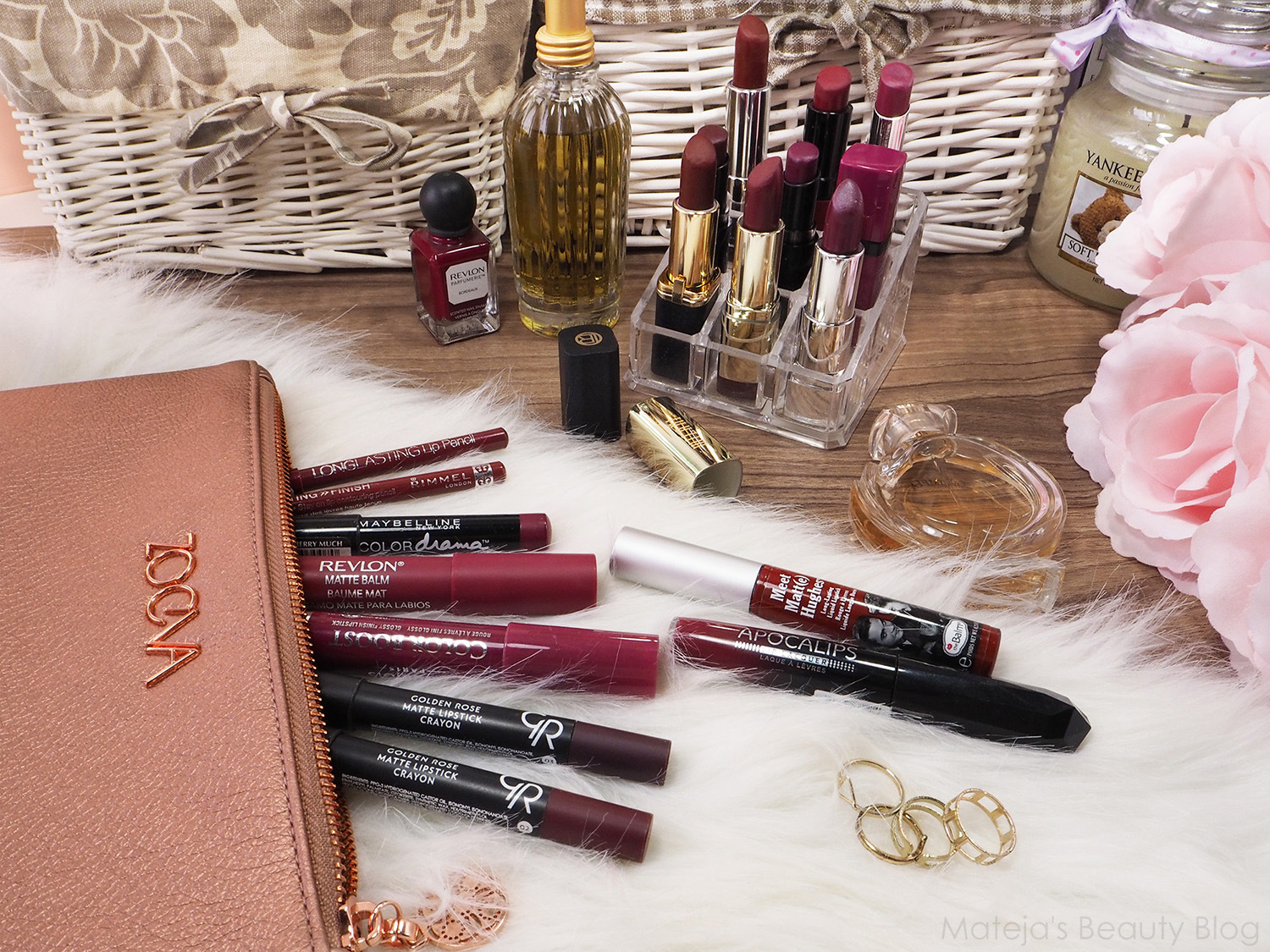 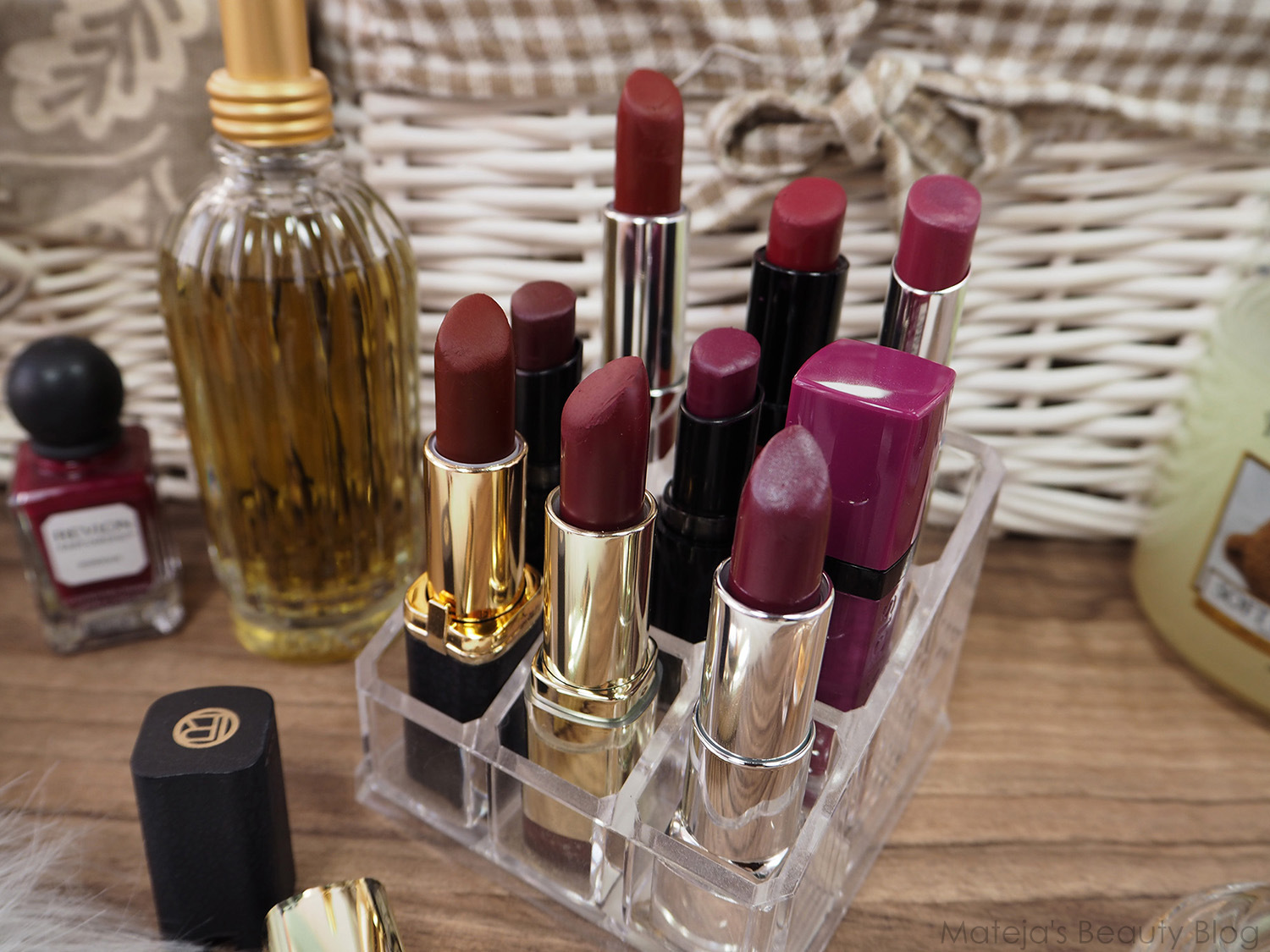 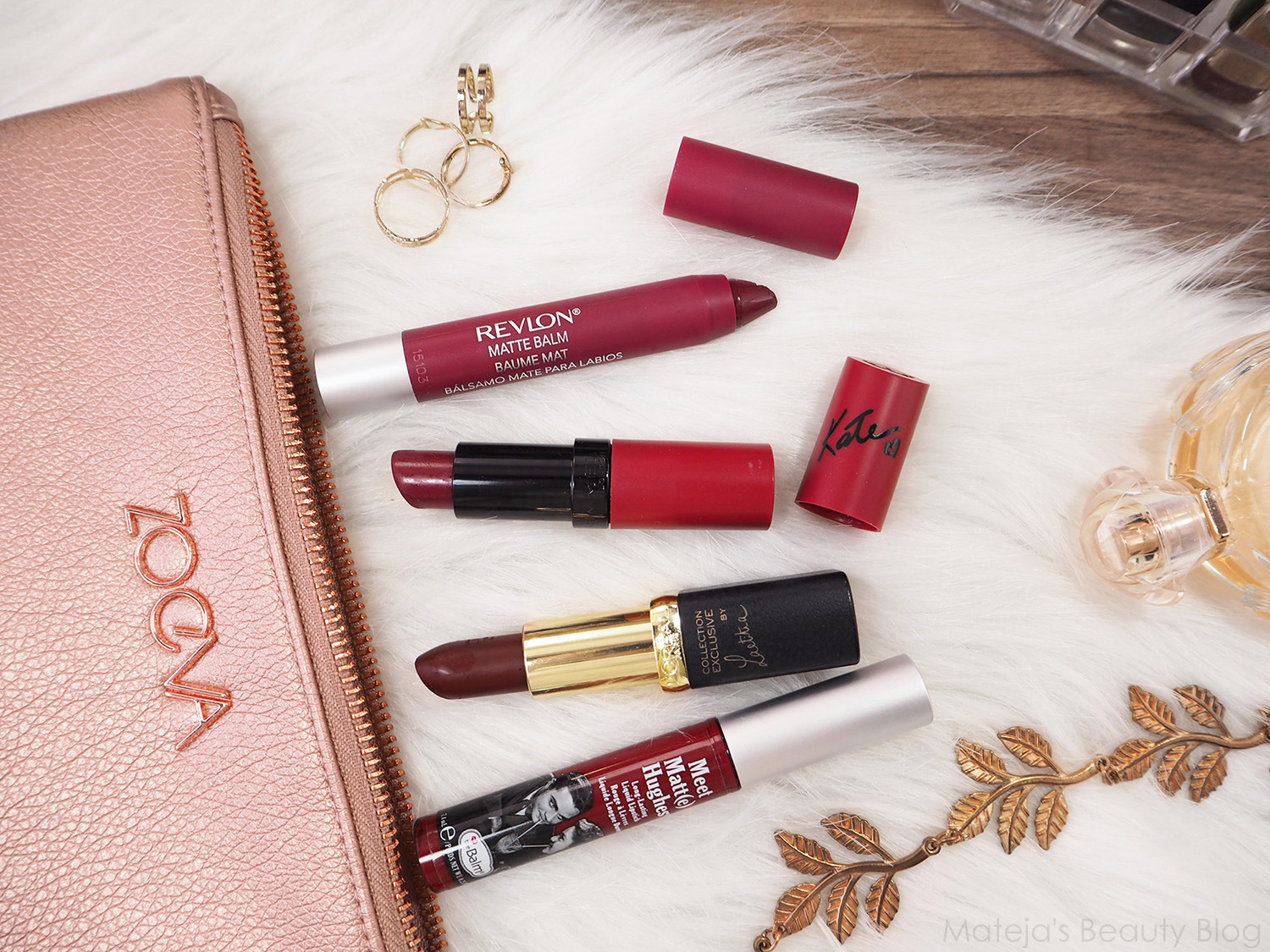 REVLON Colorburst Matte Balm
Fiery
Starting with one of the lighter options, Fiery is one of the darkest shades in the Matte Balm Range and it’s not exactly a proper vampy shade, but it’s still deep enough to be a part of the trend. It’s one of the warmest, so most brownish reds in my collection, so best for warm skin tones. Formula is just lovely on the lips, it’s so smooth, easy to apply and it has a creamy-satin finish. It’s not the cheapest option at 10.89 €, but it’s one of the easiest to apply as well as most comfortable.
RIMMEL Kate Moss Matte Lipstick
107
The good old classic which has probably been featured on most such lists from other people. This shade absolutely exploded four or five years ago when these started to be sold and it’s popular for a reason, however, it’s again not a proper dark burgundy, but it’s more of a shade with which you dip your toes into the burgundy trend. It’s a darker red with some berry tones, also lightest shade in the bunch and it looks good on just about anyone. You really need a lip liner with this one because it’s very difficult to apply nicely and the staying power isn’t amazing. I swear this used to be at least two euros cheaper, but now it’s 7 €. 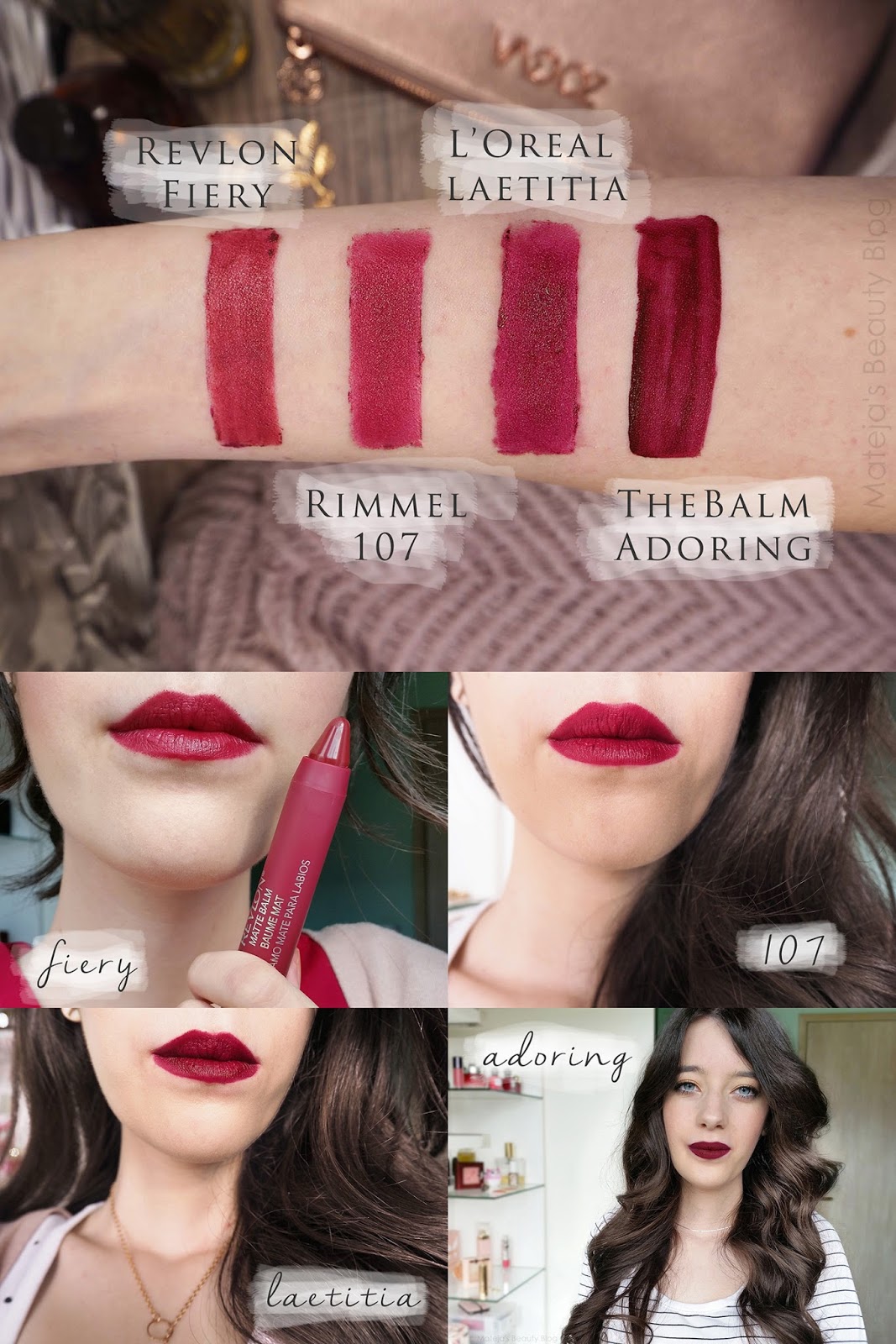 L’OREAL Color Riché Pure Reds Collection Exclusive
Laetitia
I’m sorry I included this one because I went to check in the shops after I took the pictures, but I couldn’t find it in DM or Műller any more, so it might be really difficult to find. However, it’s no secret this is my long standing favourite and the burgundy I wore the most, so much in fact, I neglected all the rest. It’s the most berry burgundy that’s why I love it and it’s already properly dark, but still a very classy shade. The formula is amazing and it just glides on the lips, plus it lasts so well. It’s not exactly cheap at 13 €, but one of my favourites ever.
THEBALM Meet Matt(e) Hughes
Adoring
My new love and the one that made me neglect Laetitia. It’s a proper dark burgundy with a cool undertone and despite being a dark shade it’s perfectly even on the lips, even though probably a majority of dark matte liquid lipsticks are patchy, this one is an absolute dream. It’s fully opaque, has a great proper matte finish and lasts amazingly well on the lips. It’s the most expensive one of this list at 17 € (19 € in Müller), but completely worth it. 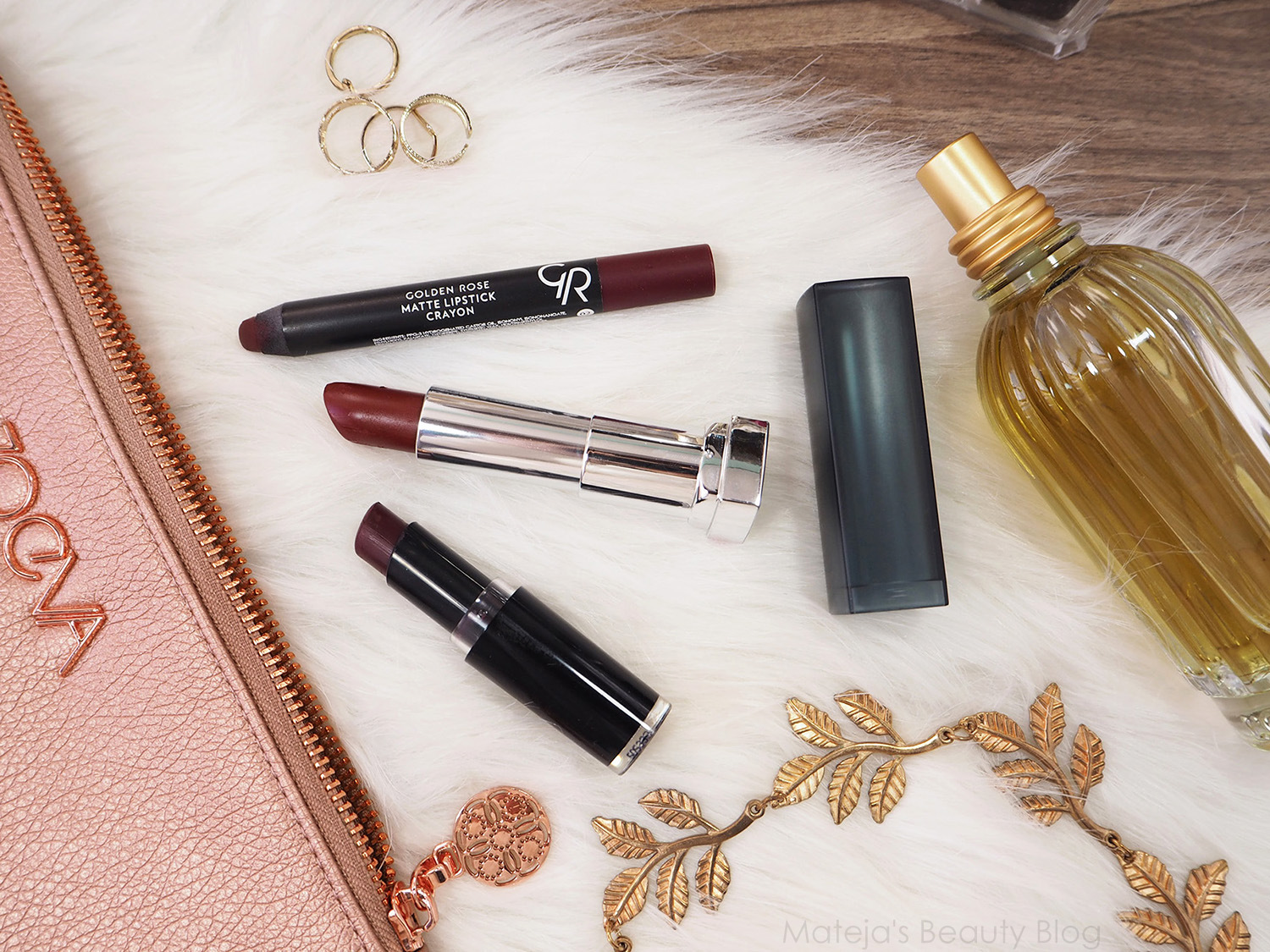 GOLDEN ROSE Matte Lipstick Crayon
02
If you want something cheap and properly dark burgundy, this is it. It doesn’t even have to be in a crayon form, actually I find the lipsticks a bit better and Golden Rose has about the same shade in the Velvet Matte lipstick range (it’s shade 23 there). The shade is very similar to Mac’s Diva, but prettier because it’s cooler which to me looks more sophisticated. It’s a simple and comfortable formula to wear, has a good pigmentation and a satin finish. It costs a reasonable 3.90 €. 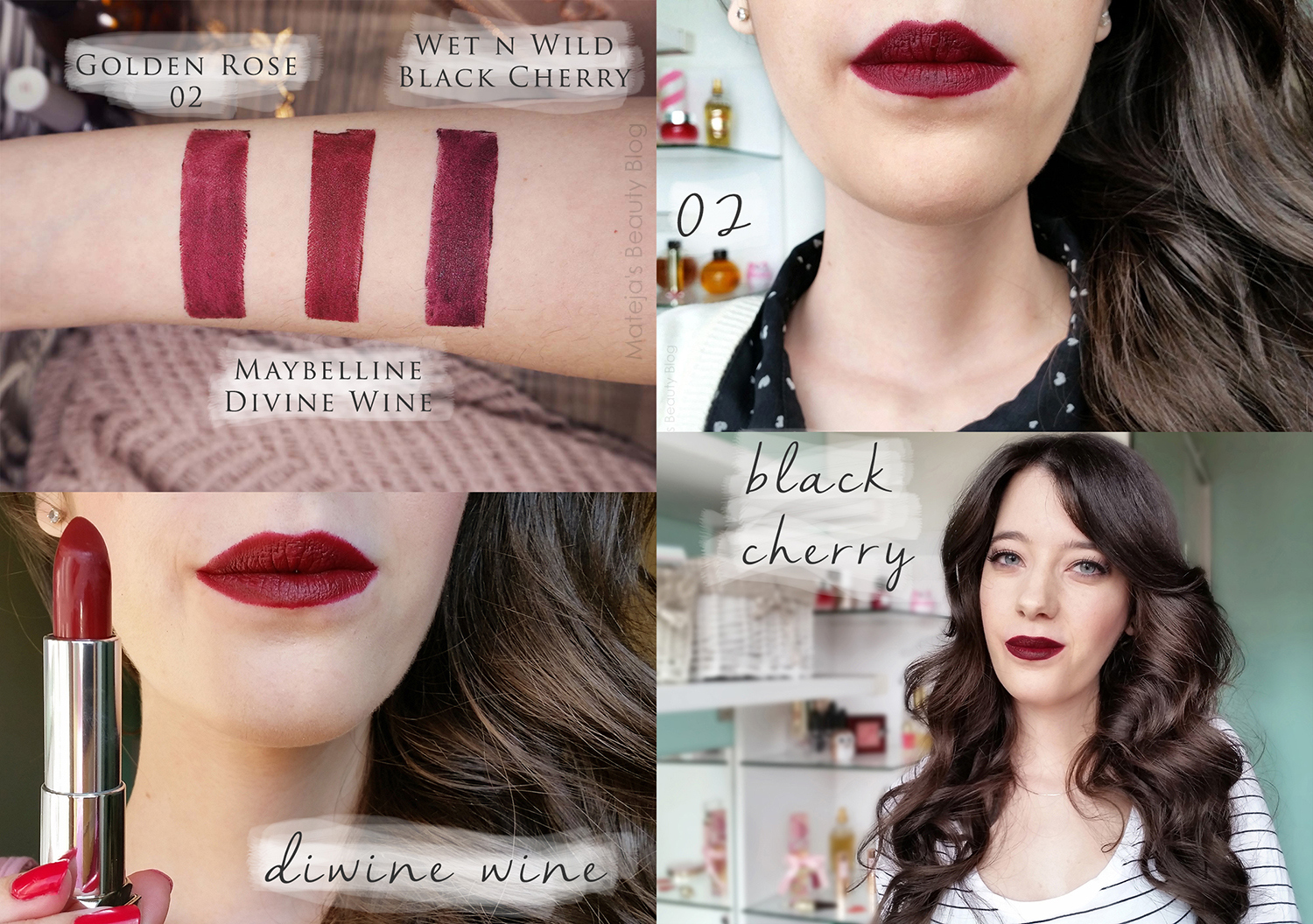 MAYBELLINE Color Sensational Matte Lipstick
975 Divine Wine
I sometimes feel like just about everyone owns this lipstick now and the reason is simple – you can find it almost anywhere and I mean that even in Slovenia, which is a miracle. It’s probably the most comfortable formula on this list, apart from maybe the Revlon Matte Balm, it’s very creamy and pigmented, while the finish is creamy or creamy-satin. It’s the most similar shade to Mac’s Diva I own, so it’s a deep burgundy with a warm undertone. It costs 10 €.
WET N WILD Megalast Lipstick
Cherry Bomb
Another one from the cheap pile, but this one is a bit darker than Golden Rose 02 and most of the lipsticks on this list. It’s a deep sort of brownish-violet-deep red shade in a formula that is more for those who can handle a thick lipstick that has a tendency to make your lips dry, but for me it’s fine. It costs a few dollars in the States and 3 € here. 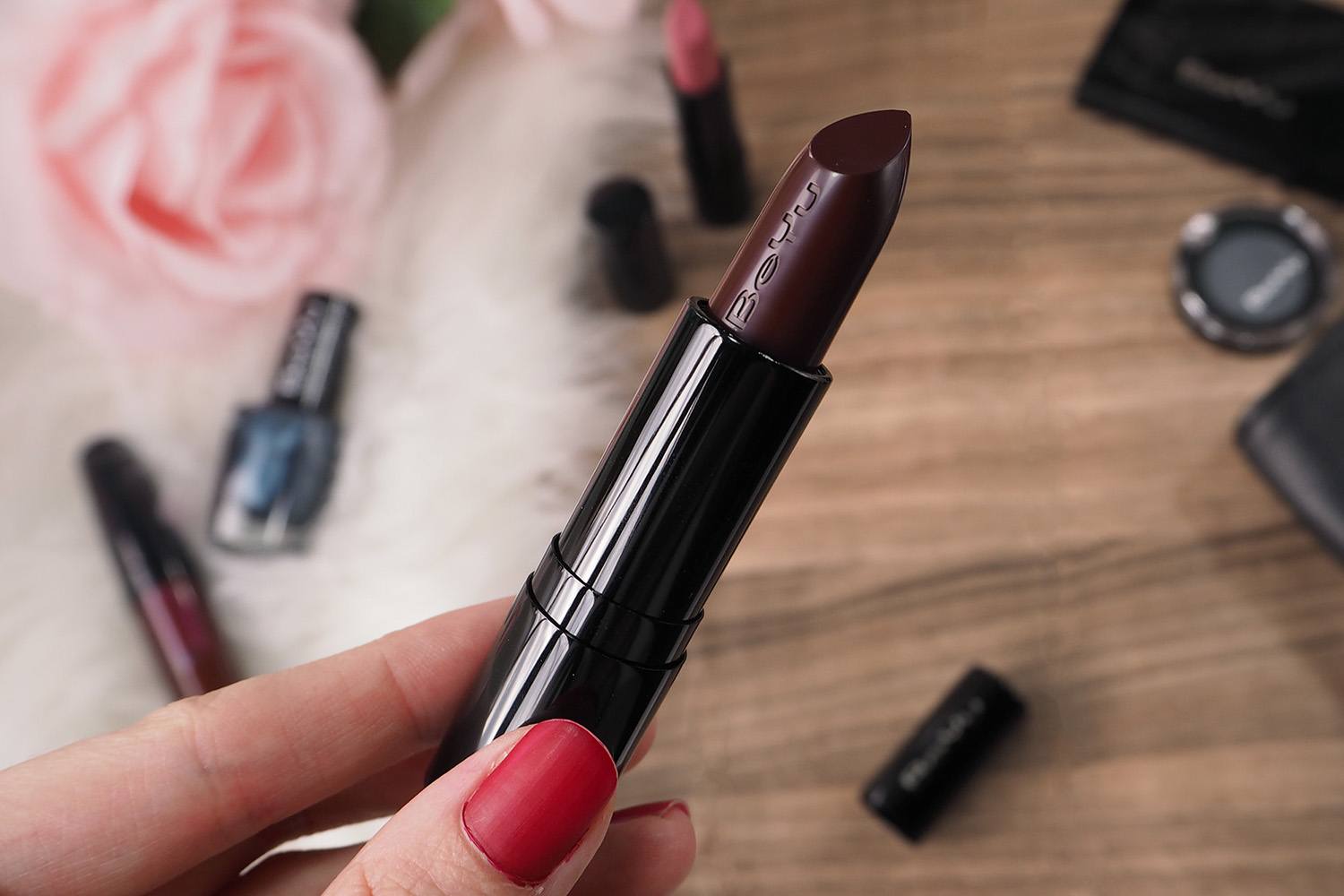 BEYU Lipstick Pure Color & Stay Lipstick
142 Best choice
I got this very recently and I just reviewed it, and though I didn’t plan it originally, I sneaked it in because it’s the darkest shade I own, or at least tied with Wet n Wild’s Cherry Bomb, except this is more violet. It a deep burgundy purple on the lips and the formula is quite thick, so a bit old school like, though it glides on the lips just fine. The price, however, is high at 14 €. 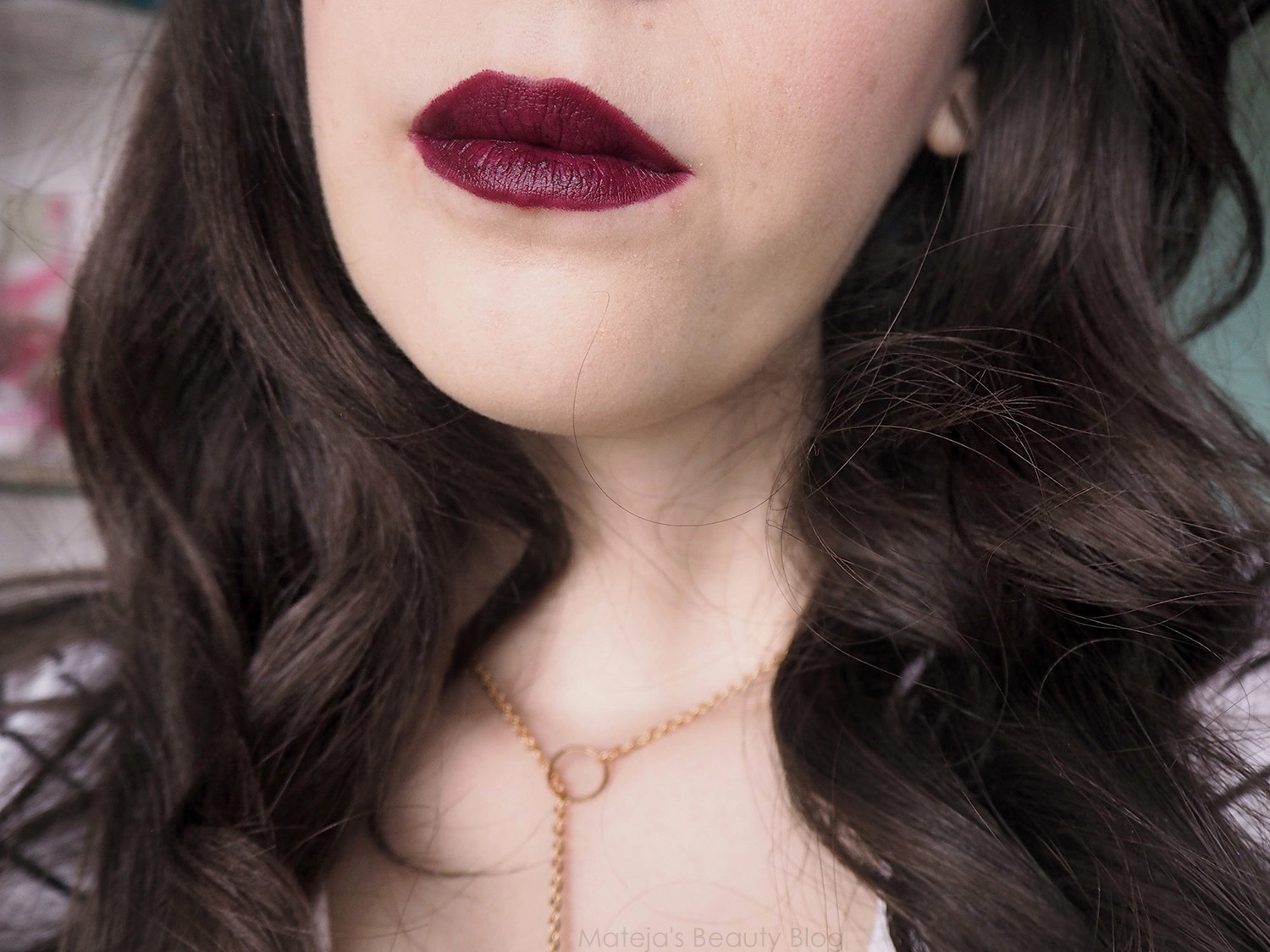 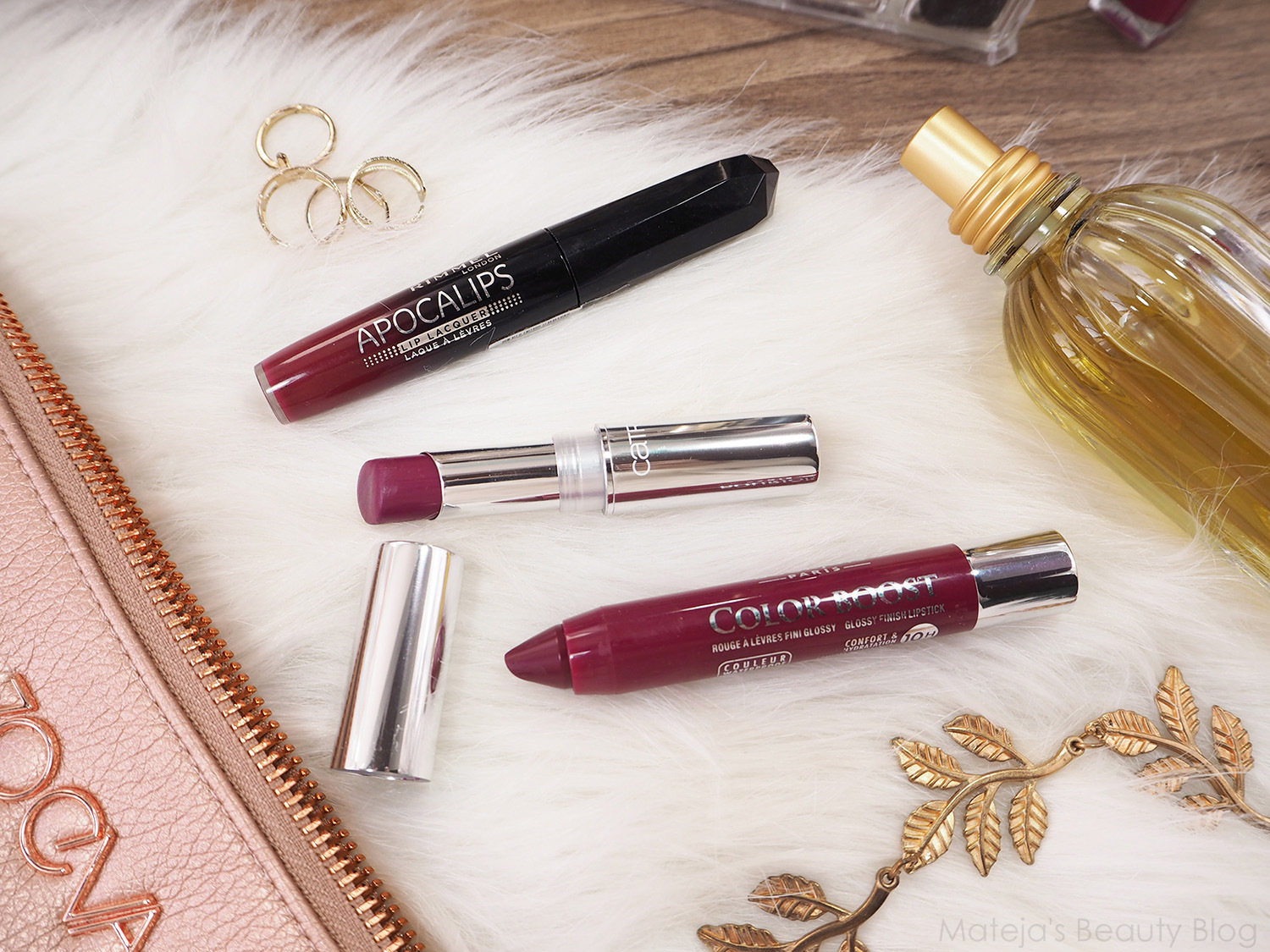 RIMMEL Apocalips Lip Lacquer
Eclipse
Eclipse was one of my earliest burgundies I got and honestly I still kind of regret it, but only because it’s very glossy and when it comes to dark shades I like to keep things matte. It’s not the burgundy I expected, as it’s muted brownish type of red with some purple-rose tones, but it’s completely opaque on the lips and it even lasts well. These have a strong very strange scent. It costs about 7.5 €, but you won’t find it on the stands in Slovenia .
CATRICE Supreme Fusion Lipcolour + Care
070 Remarry Berry
If you want something that works great as a stain or an almost fully opaque colour, this is it. It’s dark berry shade with a medium-full pay-off and a creamy-glossy finish, but it’s surprisingly not a messy formula and it’s great for dry lips. It costs 5.29 €. 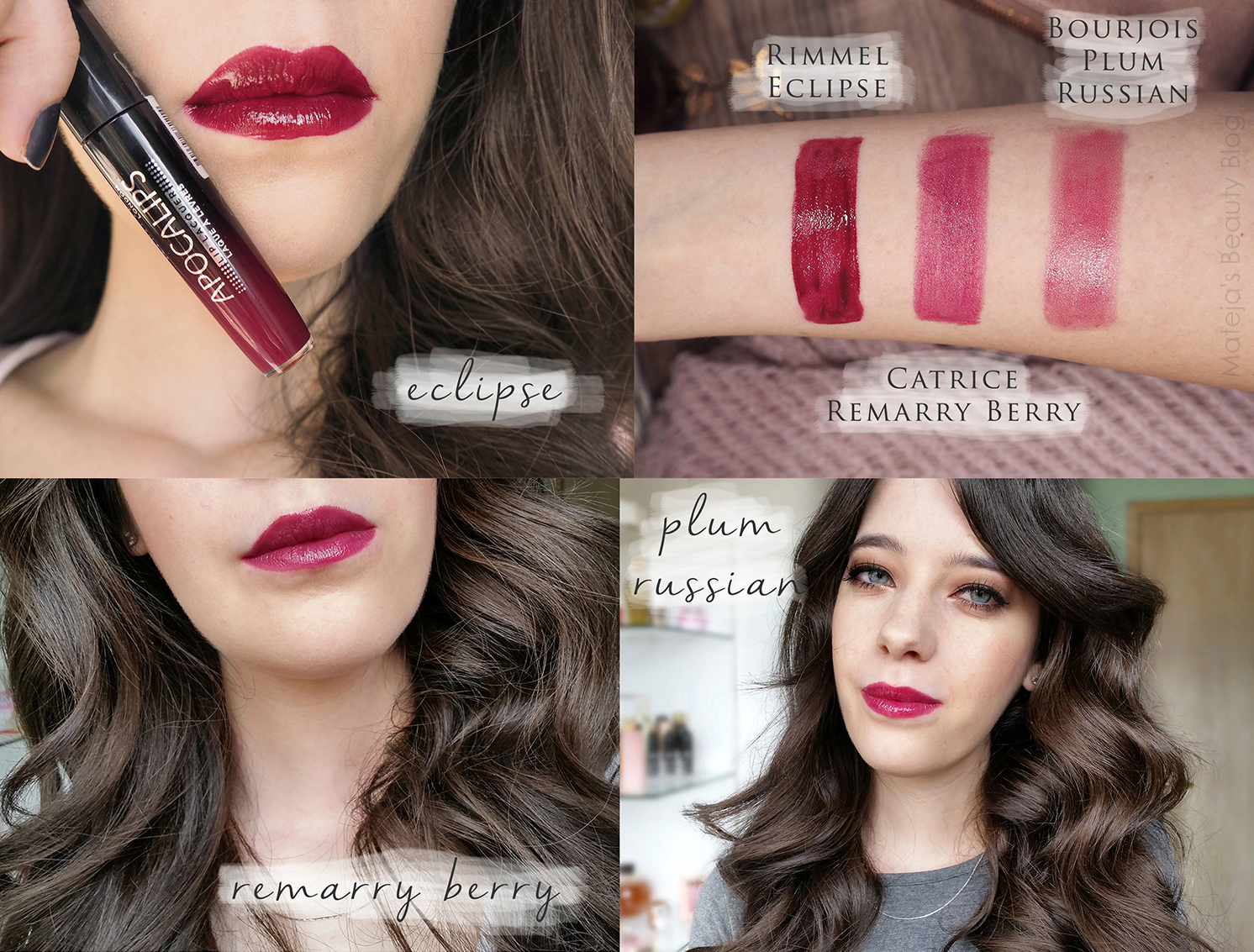 BOURJOIS ColorBoost Lip Crayon
Plum Russian
Plum Russian is very similar to Remarry Berry in tone, but more red and it’s sheerer, unless you apply a lot of coats, like on my picture. It’s a very comfortable formula to wear, as it’s actually a bit moisturising and the pen design makes it easy to apply. It costs 8 €.
BERRIES 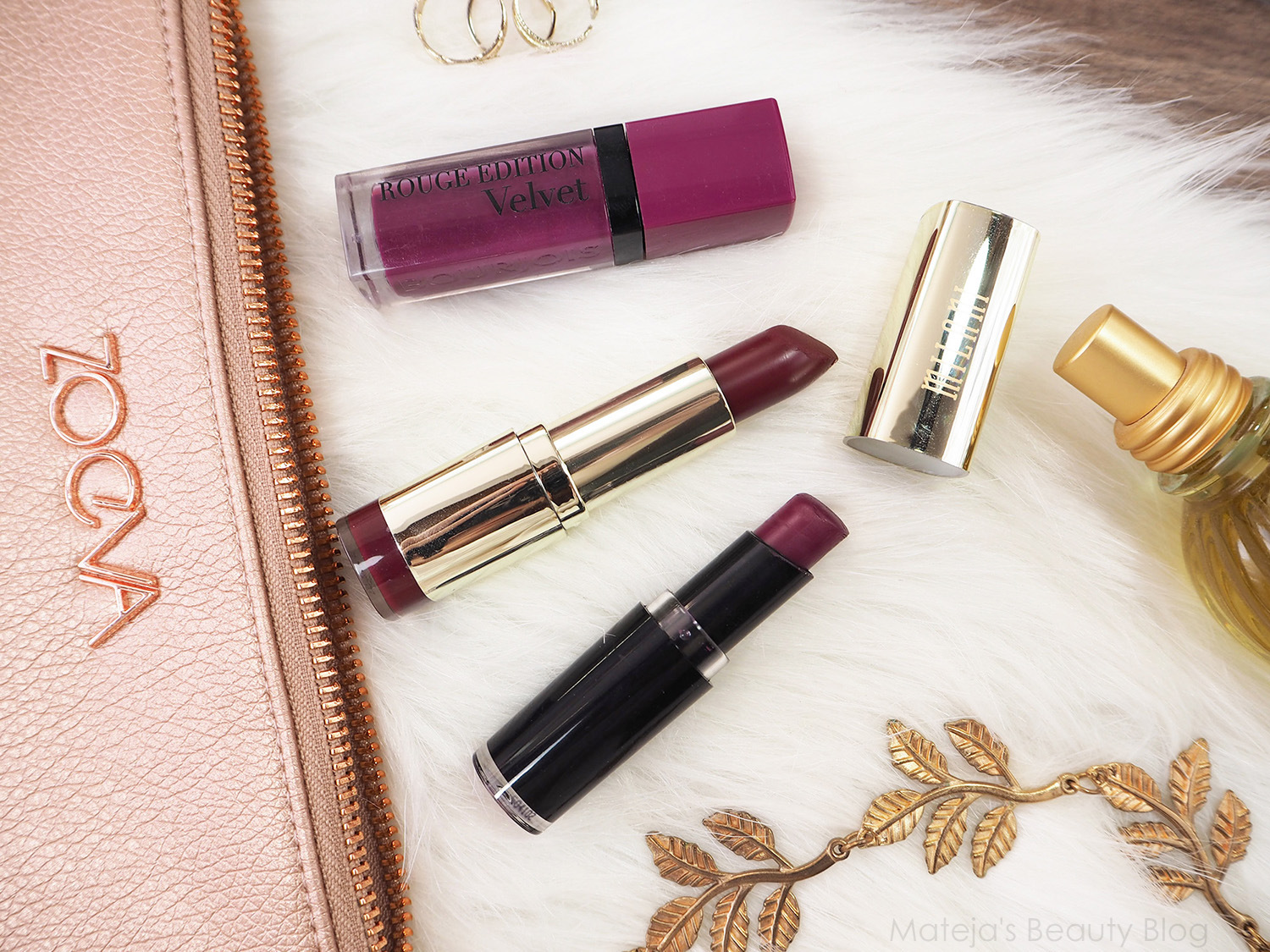 BOURJOIS Rouge Edition Velvet lipstick
14 Plum Plum Girl
Velvets are still probably one of the most comfortable ways of wearing a properly matte formula and staying power is great as well. Plum Plum Girl is one of the shades that is unfortunately not available in Slovene drugstores, but you can get it online. It’s a deep magenta-purple shade that is like a mix between Mac’s D for Danger and Rebel. It costs 12 €. 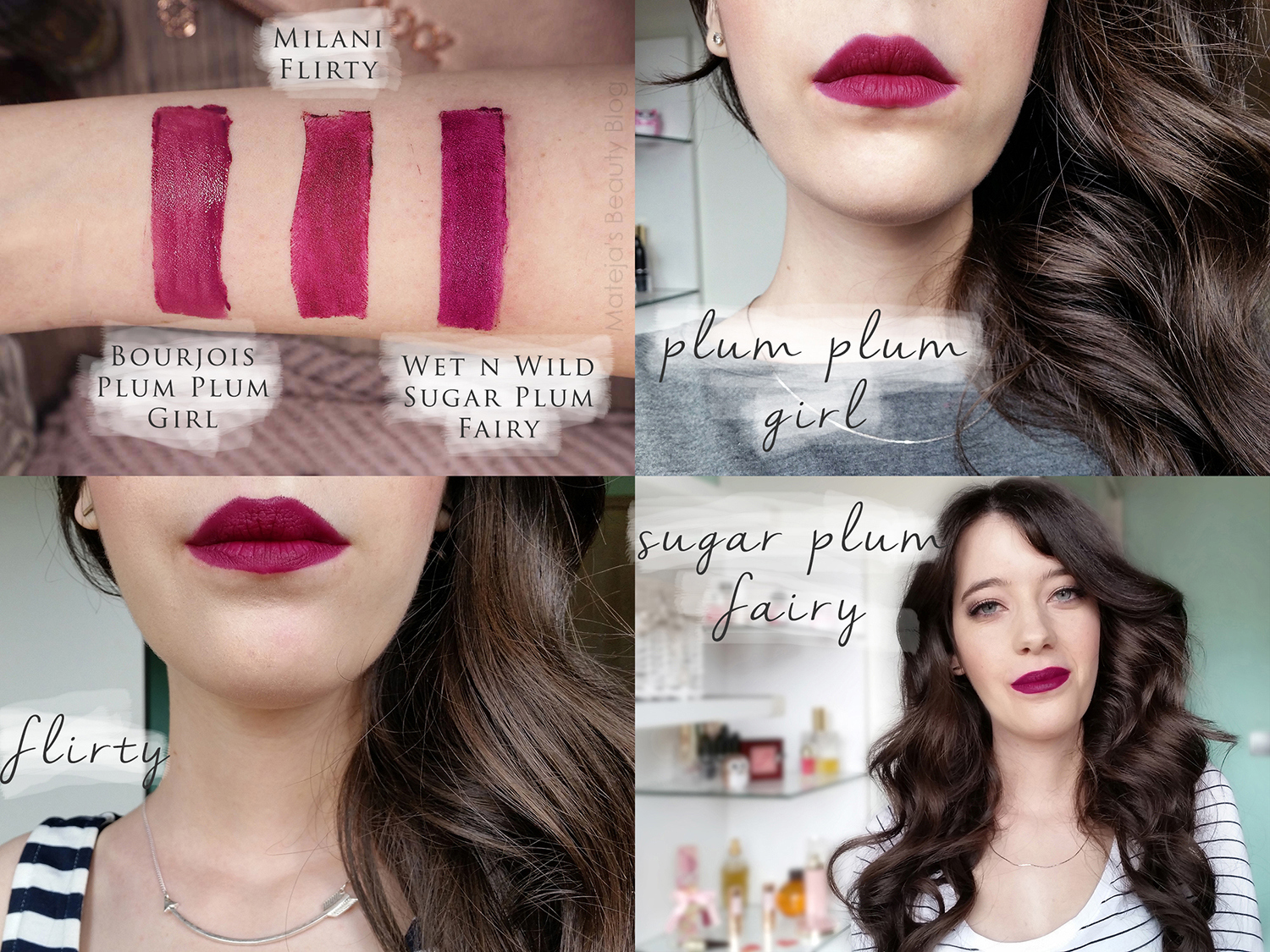 MILANI Color Statement Moisture Matte Lipstick
Flirty
These are my favourite matte classic lipsticks. It’s a unique formula and something I’d describe as silicone-creamy, so it’s very smooth on the lips almost like a primer with a lovely matte finish that doesn’t look chalky. The shade looks really dark in the tube, but on the lips it a deeper pink-purple shade, which more red than leaning to violet. It costs 6 €.
WET N WILD Megalast Lipstick
Sugar Plum Fairy
This shade looks a lot different on me than on most swatches I’ve seen online, but those were mostly on darker ladies than me (so basically anyone over NC15). On me it’s a purple shade, but the darker the skin tone, the more pink it looks. The formula is a type that can be love-it-or-hate-it because it’s very thick and can be drying. It costs 3 € and it’s very similar to Mac’s Rebel. 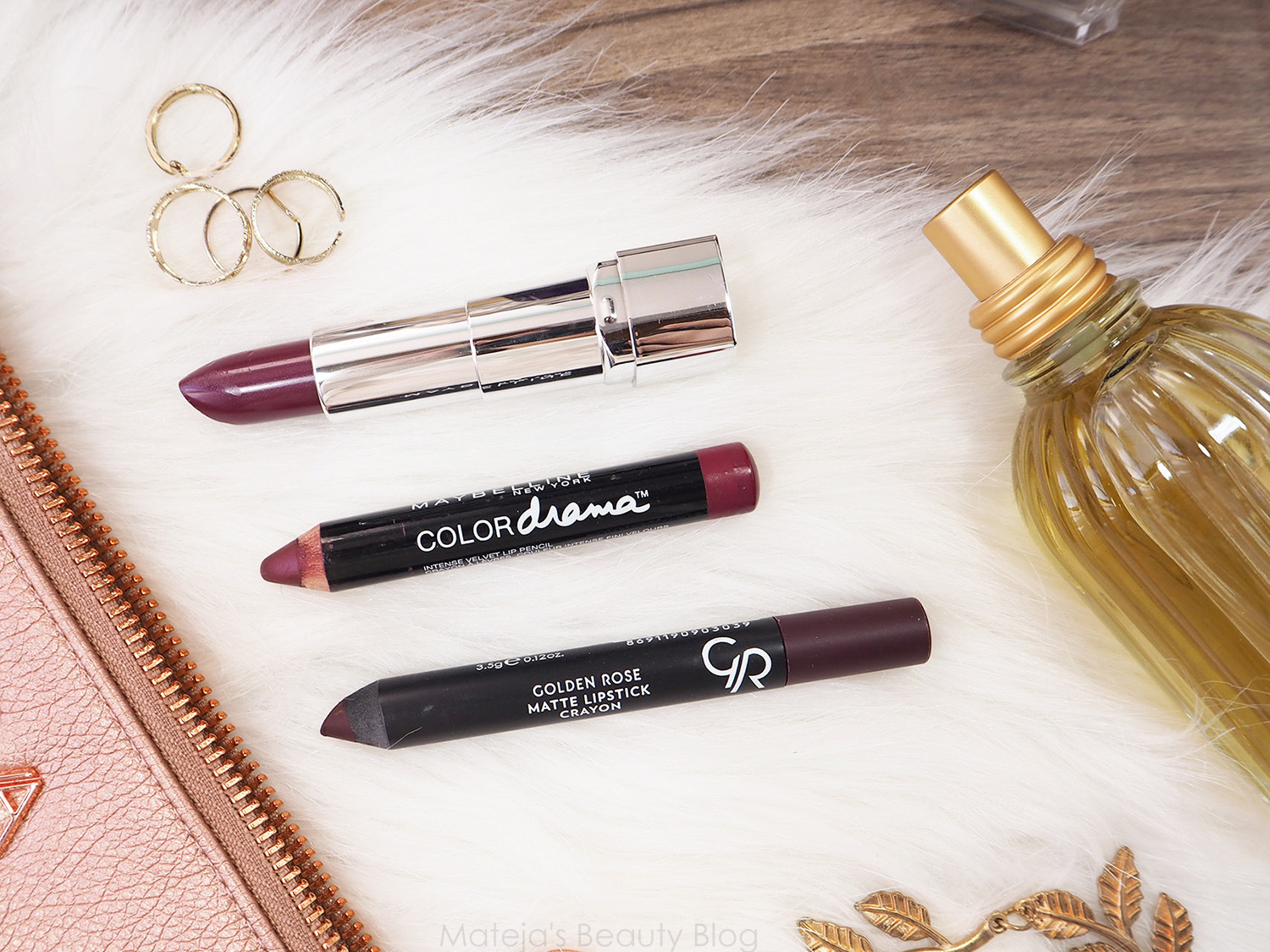 RIMMEL Moisture Renew Lipstick
330 Sloane’s Plum
Even though this is a typical shiny lipstick, it’s super pigmented and it’s also very light on the lips, moisturising and comfortable to wear. As the name says it’s a muted plum shade or a deep burgundy with strong violet tones. If you need something that feels like a lip balm, this is it. It costs €8.31.
MAYBELLINE Color Drama Lipstick
Berry Much
This is quite a dirty type of burgundy shade and it’s more purple, which is why I was never truly happy with it. The formula is lovely, it glides with ease and it feels like an actual creamy lipstick, plus it smells nicely fruity too. It costs 3.55 € 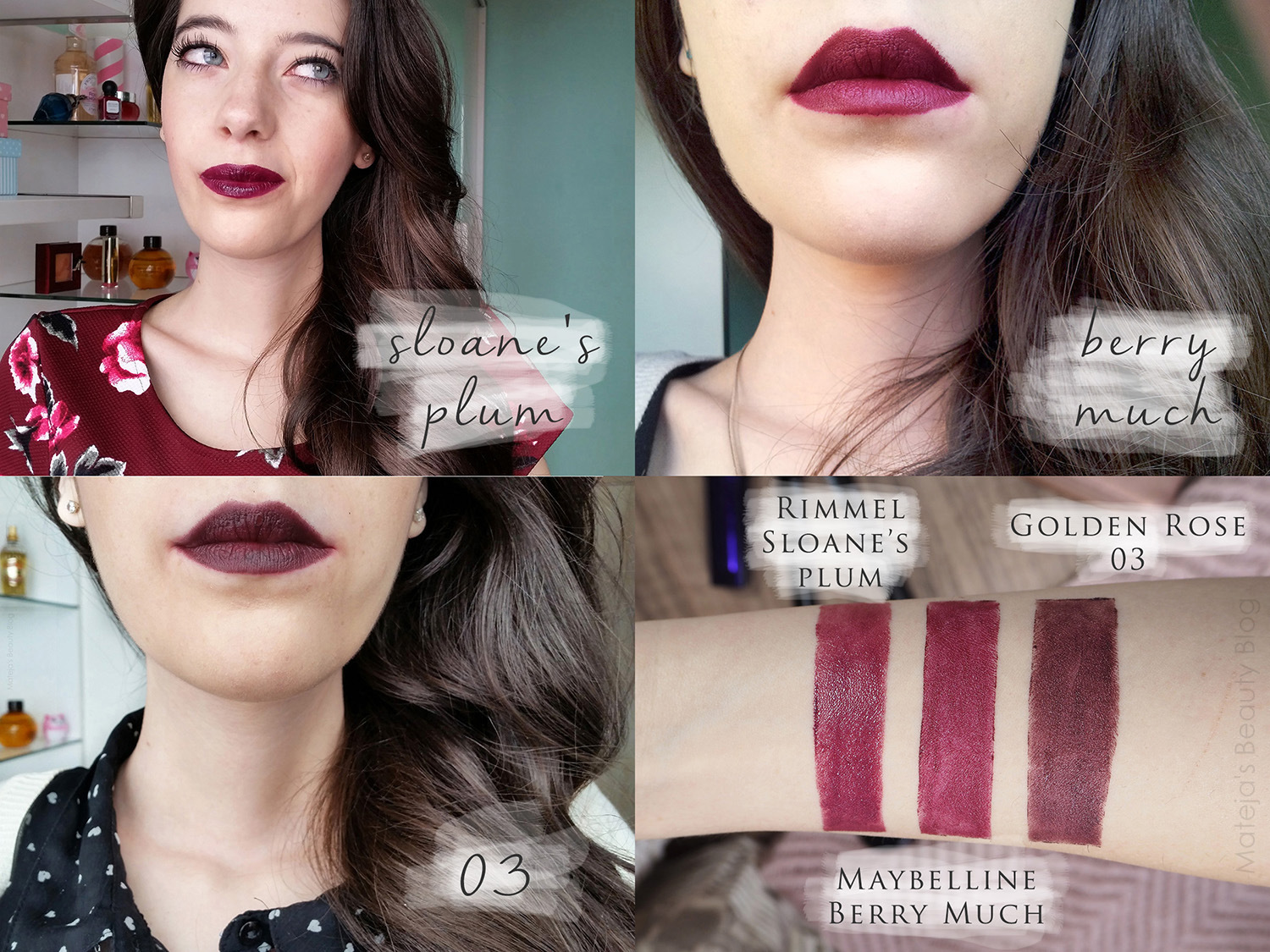 GOLDEN ROSE Matte Lipstick Crayon
03
Unlike the gorgeous 02 that I mentioned above, this one is not my favourite, but if you want a deep shade that is a muted purple-brown, this is it. It’s again very affordable and it just glides on the lips.
LIP LINERS 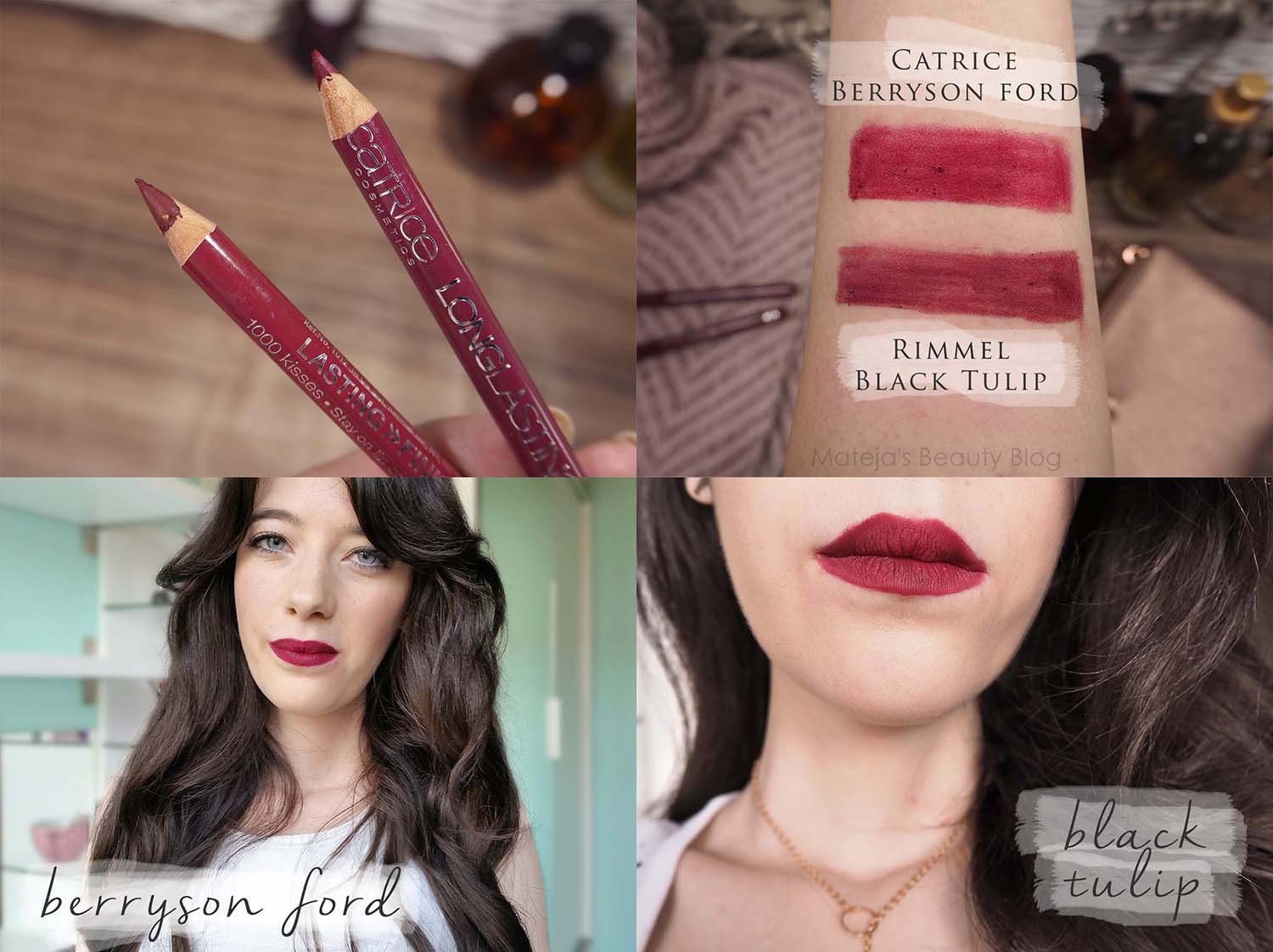 CATRICE Longlasting Lip Pencil
030 Berryson Ford
Neither of these lipliners are very dark, but this cool deep red shade is good for most of these lip colours, especially with Laetitia. You can easily wear it on its own and it has a great matte finish, but there is a chance it’ll feel dry on the lips. It costs 2.29 €.
RIMMEL Lasting Finish 1000 Kisses Lipliner Pencil
Black Tulip
This is definitely the most brown choice on the list, as it’s a muted type of burgundy. I got this to match Rimmel’s 107, but they are words apart. The formula is similar to Catrice’s, so if you have dry lips, use it just for lining. It costs €3.83. 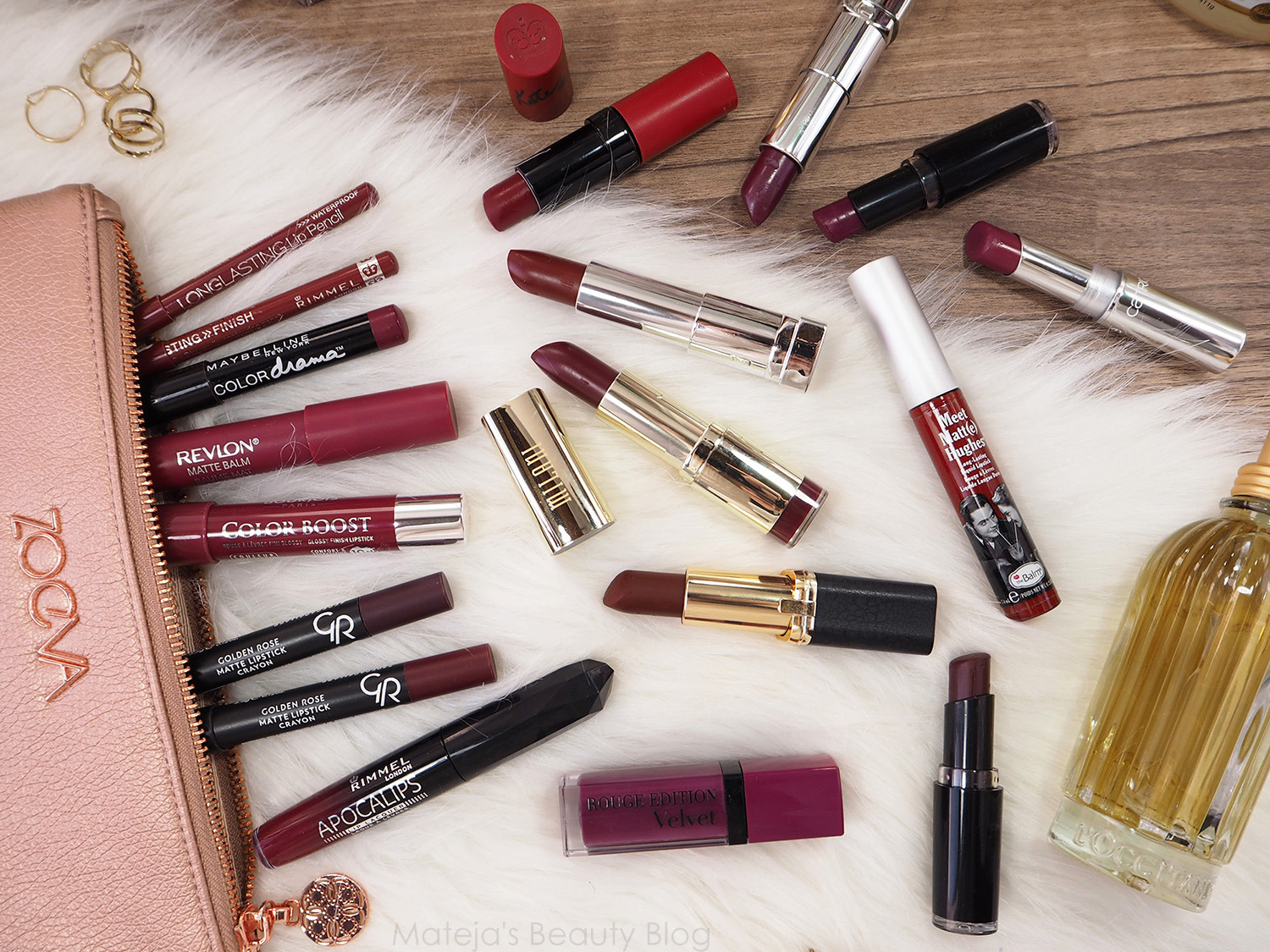 You know I have more. Mac’s Diva (warm burgundy, closest to Divine Wine and Golden Rose 02) and Rebel (purple, closest to WnW Sugar Plum Fairy except more violet), but only in sample form, Bourjois Rouge Edition Velvet in Grand Cru which died on me (formula is useless now when it’s old) and it’s one of the most true red in the selection, closest shades are Divine Wine (a shade darker) and theBalm’s Adoring (darker, cooler). Out of the shades I don’t own, one of the cheapest ways to try the burgundy trend is Essence’s Longlasting lipliner in 11 be a game-changer and also Essence released a ton of such shades this year, all permanent, so it’s much easier to get a proper burgundy now than it was five years ago when we had to order online.
I could easily live only with L’Oreal’s Laetitia, theBalm’s Adoring and Milani’s Flirty. These are my favourites.
Have a great day!