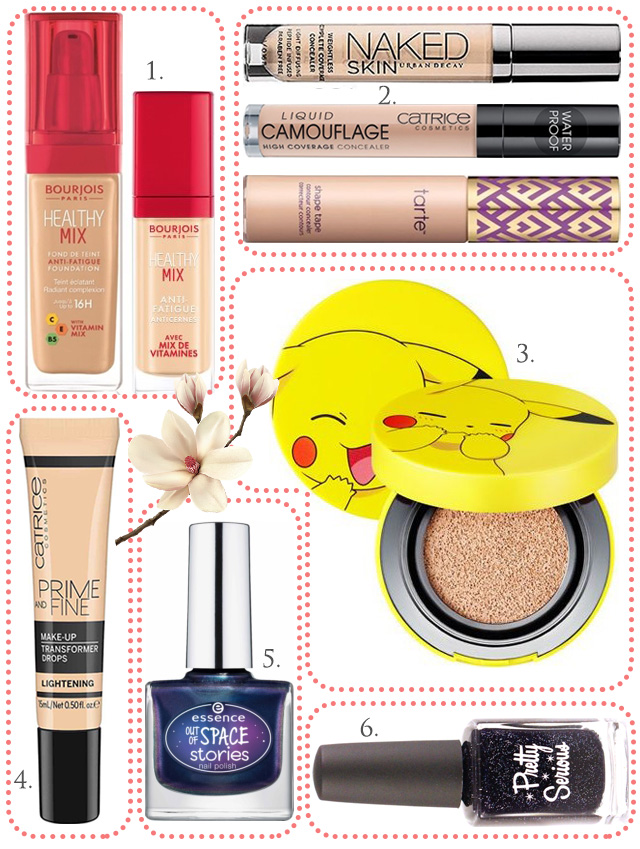 1.  BOURJOIS Healthy Mix Foundation (reformulated)
50 Rose Ivory
Healthy Mix has been revamped again and though that normally wouldn’t really interest me, since I much prefer the Serum version, this time by some miracle they actually added a lighter shade 50 and if it’s indeed lighter than 51 (I have yet to see swatches), I need it.
They also repackaged the concealer, which I like, but disliked the original tube packaging. However, I actually like Radiance Reveal so much, I’ll probably skip this one, unless it’s now full coverage.
€12.79
,
2. CONCEALER:
URBAN DECAY Naked Skin Weightless Concealer (light neutral), CATRICE Liquid Camouflage Concealer (005) or TARTE Shape Tape Concealer (fair)
My full coverage concealers are on their last legs and it’s just such a “joy” to use them both with broken wands (stupid packaging) scrapping the last bits out, so I really need a new one. These three intrigue me the most, though I like what I currently have (Nars and Collection), but I’d like something less matte for now because I realised I use them mostly in the inner corner of the eyes. It’s probably going to be Catrice’s when I finally find it in stock somewhere because it’s easiest to get.
UD, €22.40; Catrice 3.79€ , Tarte 24$
3. TONYMOLY Pikachu Mini Cover Cushion Pokemon Edition
01
I actually already ordered this, but it’s being held up because of shipping problems due to weather, so I really wish this arrives safely (I’m scared it’ll be out of stock because no one set it aside or something). I did get it because it’s Pokemon (I don’t care if you judge me), but also because I’m hoping shade 01 is very pale, which I desperately need. I’ve never tried a cushion foundation before, so that will be new to me.
$9.95
4. CATRICE Prime & Fine Makeup Transforming Drops
Lightening
Most of my foundation are rubbish and those that are actually good (Milani Conceal + Perfect) are too dark, so I really need some sort of a lightening product and this will be the easiest to get (I’d love TBS’s drops, but I can’t get them). I hope the texture isn’t too odd, so it doesn’t mess up my foundations. Based on swatches I’ve seen it’s tinted yellow and I’m not sure I like that. I need to see it in person.
3.49 €
5. ESSENCE Out of Space Stories Nail Polish
05
I have a thing for anything with a galaxy/space effect, so naturally this shade caught my eye. I haven’t seen any swatches yet, but Essence promises this line contains holographic, changing and metallic finishes. I have to see it first and then decide if I want it.
1.99 €
6. PRETTY SERIOUS Naileontology Collection
Eye of Copernicus
I blame my lemming for this solely on Metka’s gorgeous swatches. I’ve wanted Essie Starry, Starry Night, but missed it since it wasn’t sold here and I didn’t want to pay for shipping on Boots, but Metka say this one is even prettier so I need it. The only thing is that it’s expensive with shipping, so again I’m reluctant to pay so much for a nail polish.
10.36 € 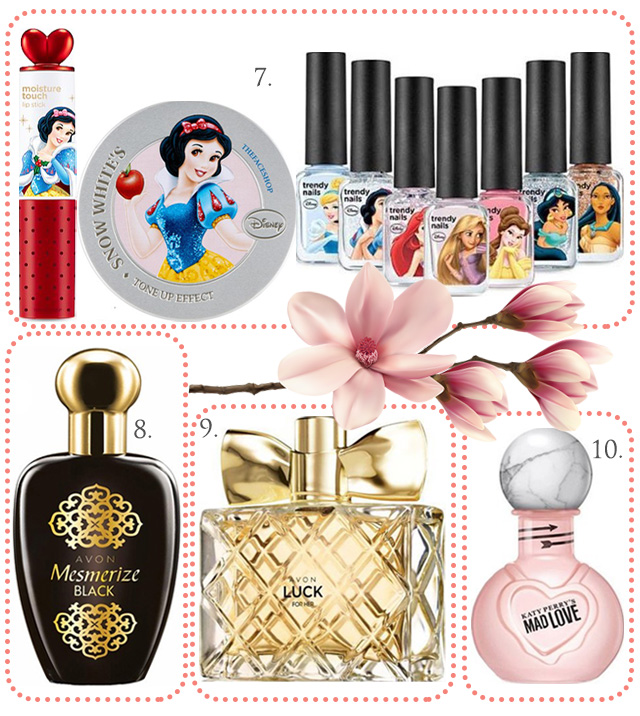 7. THE FACE SHOP Disney
Snow White
Yeah, I have a thing for Snow White too (I hope for obvious reasons), so this collection, which actually includes other princesses, caught my eye, but I haven’t taken the plunge yet, apart from a sheet mask (bellow). The cushion is a peach colour corrector and it supposedly brightens the skin tone (I’m scared it’s too peachy for me), but I love the packaging, while the lipstick is a classic red and the nail polish has flakes. I have a feeling I’ll miss it, but it’s not at the top of the wishlist.
8. AVON Mesmerize Black
This I blame on Petra who gave me samples of it. It’s such a wonderful scent and I just fell in love with it. It’s basically pure sandalwood, so a warm and cosy fragrance, but without the overused vanilla or amber. It’s really affordable on Salma, which makes me even happier.
8.90 €
9. AVON Luck for Her
I love the bottle of this one, it’s so classy. I had a sample of this and it’s a scent most will find boring, but I like these type of fruity florals. I smell sweet pineapple (notes mention berries and citrus) and a gentle white flower scent, so it’s basically a Fructis shampoo type of scent. Notes.
13.90 €
10. KATY PERRY Mad Love
I spray this one every time I’m in DM. It smells so good, but it’s a very teenage fruity sweet scent, yet it has no vanilla. I swear I smell pineapples from the start, though notes mention strawberry and coconut. I currently have no happy, cocktail like fragrances for summer, so either a Victoria’s Secret spray or this are on the list. Notes.
23.80 € 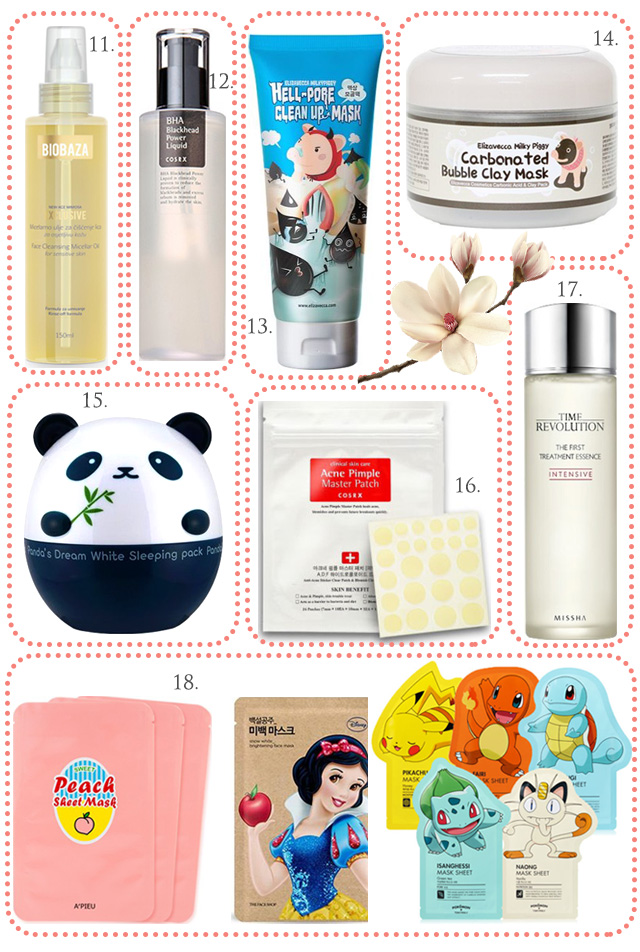 11. BIOBAZA Exclusive Micellar Oil
I have a sample of this that I’ve been using every day for three or so weeks and it’s by far the best oil cleanser I’ve tried. It’s very liquid, but with water it creates such a luxurious, thick emulsion, exactly like L’Occitane’s Almond Shower Oil. It isn’t causing me any problems and it removes makeup well (ok, only a bit of mascara is left because I can’t reach it). I really like this.
12.94 €
12. COSRX BHA Blackhead Power Liquid
I’ve been unhappy with the uneven skin texture around my nose and on my chin for a really long time, but that 5% glycolic cream I got, just isn’t working like I hoped, so maybe BHAs will be better. I hear this is great for blackheads and nothing works on mine, so I hope this is good.
16.80$
13. ELIZAVECCA Milky Piggy Hell Pore Clean Up Mask
Another blackhead treatment, well pore clearing treatment. It dries solid into a sort of a peel off mask which I hope works better than strips that usually fail on me, also because I can never fit them properly and I end up with air pockets on the sides.
$13.79
14. ELIZAVECCA Milky Piggy Carbonated Bubble Clay Mask
I read so many positive reviews about this that it’s hard to ignore. It’s a mask that bubbles after application (I once had cleanser from Skin 79 that bubbled) and it apparently clears out the pores.
$7.99
15. TONY MOLY Panda’s Dream White Sleeping Pack
I ordered this as well already and it’s also being held up, just like the Pokemon Cushion, so I hope it arrives safely. I spotted this on Makeup & More Blog where Zlatana praised it and I’ve read further positive reviews. It’s a moisturising treatment that you leave on overnight, so it’s something like Balea’s Power Maske. Plus the packaging is adorable.
US $8.96
16. COSRX Acne Pimple Master Patch
I read this is the best spot treatment and I just wish I knew this before because I was searching for something last year and ended up buying Afrodita’s version, which does very little. I had patches before from Balea and they were also some of the most effective ones, but I have even more faith in Korean skin care.
$4.25
17. MISSHA Time Revolution The First Treatment Essence
Another product I’ve heard a ton of praises about. Essence’s are to me a strange step in the skin care routine, but I hear this is somewhat like the popular SKII Essence (plus the Time Revolution serum from Missha is supposedly a dupe Estee Lauder’s ANR), but it’s again not the most affordable product, so it’s going to be on hold for a while, though I really should start investing more in my skin.
$24.53
18. SHEET MASKS
A’PIEU Peach & Yogurt Sheet Mask, THE FACE SHOP Snow White Brightening Face Mask, TONY MOLY Pokemon Sheet Mask
I kind of want to force myself to use more masks because this winter it was just crazy how much my skin dried up (I was sick with a fever for the first time in years, if not decades and it wreaked havoc) and almost nothing helped, so I need to start injecting more moisture into my skin and sheet masks are a really good boost. I know Innisfree’s and Etude House’s are very popular, but I really like the idea of the peach one from A’Pieu and the Pokemon ones are so cute, while I already ordered the Snow White one. Any recommendations? 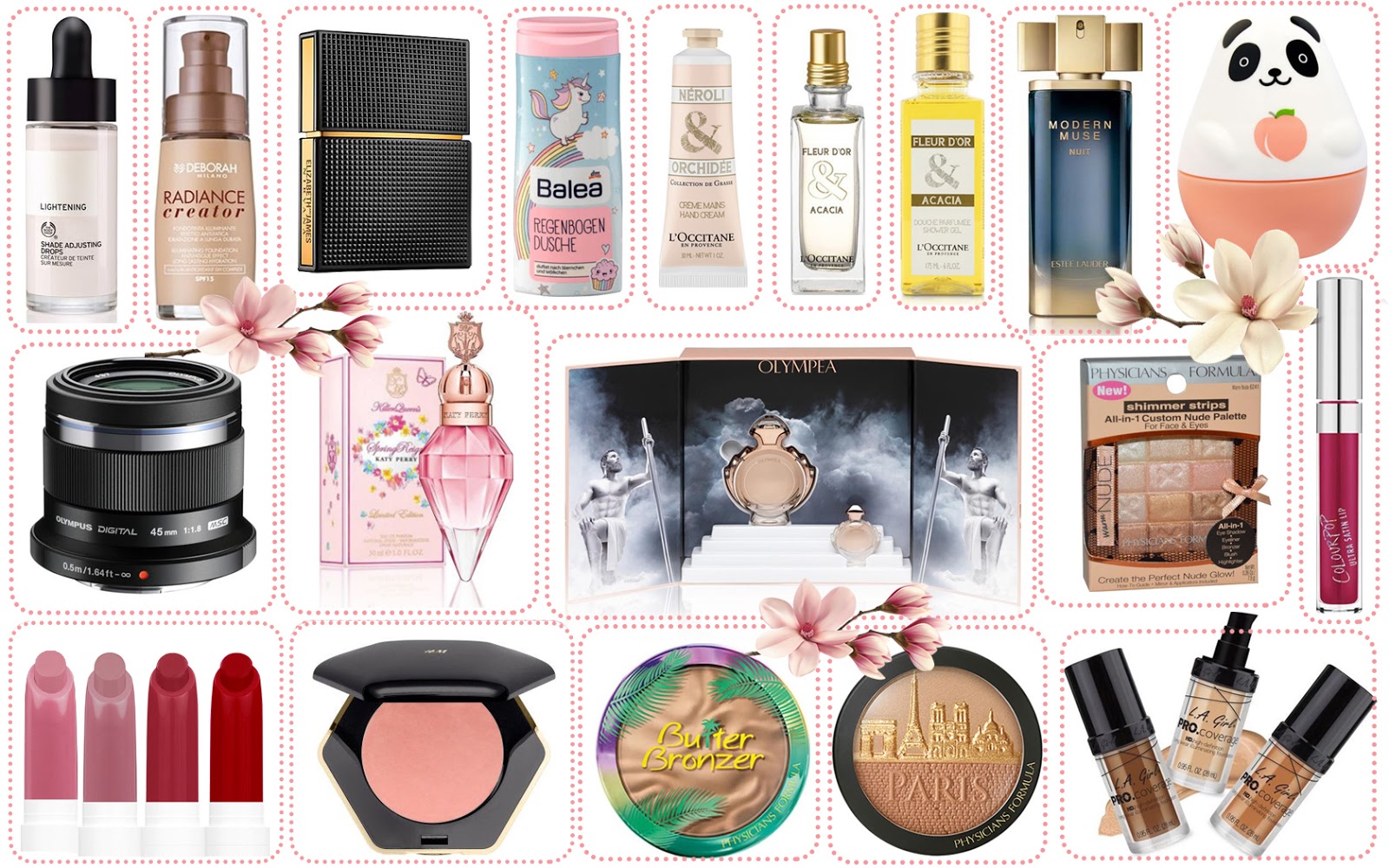 The Body Shop Shade Adjusting Drops Lightening / Deborah Radiance Creator Foundation 00 / Elizabeth  and James Nirvana Black / Balea Regenbogen Shower Gel / L’Occitane Néroli & Orchidée Hand Cream / L’Occitane Fleur d’Or & Acacia fragrance and shower gel / Estee Lauder Modern Muse Nuit / Etude House Missing U Hand Cream //
Olympus M. Zuiko Digital ED 45mm f1.8 / Katy Perry Spring Reign / Paco Rabanne Olympea Set / Physicians Formula Shimmer Strips / Colourpop Ultra Satin in Lyin’ King //
Colourpop Lippie Stick in Contempo, Lumiere, Mirror Mirror and Trust Me / H&M blush in Rosy Brown / Physicians Formula Butter Bronzer and City Glow bronzer / L.A. Girl Pro Coverage foundation white and fair.
I won’t go into details here, don’t worry. It’s just a wishlist I made in December, but never posted it and it was more meant for me because I like making these. I actually already got that Balea Unicorn shower gel and I can tell you it smells of the most boring car freshener vanilla. I also got L’Occitane Néroli & Orchidée hand cream as a gift and I just love it, it smells amazing and the texture is great because it sinks in under a minute. I ordered the Etude House Panda Peach hand cream, but I’m still waiting for it to arrive. I’m debating whether to get the 45 mm lens for Olympus, but it’s just so expensive, even the used ones.
Anything caught your eye? What’s on your wishlist? Have a great day!