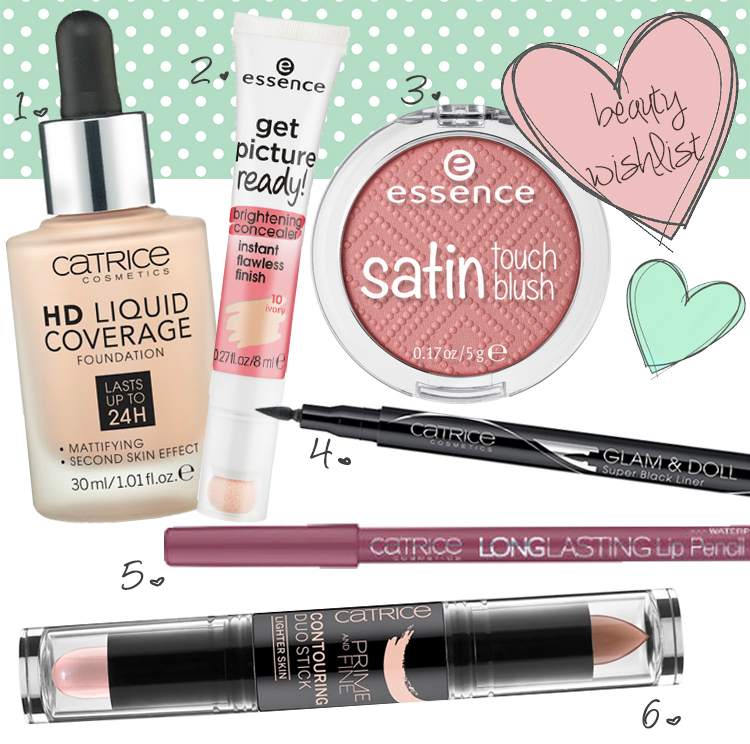 1. CATRICE HD Liquid Coverage Foundation
010 Light Beige
I’ve actually already went exploring the Catrice stands which are already filled with new products, so I’ve swatched this foundation and the lightest shade looks ok enough (under shop lights), at least for summer. The coverage looked very decent too, I’d at least a medium and unlike other Catrice foundations it’s more liquid. I’m tempted to give it a go and I’d like to sneak a sample first, but the testers are ridiculously small.
Review in German here.
About 7 €
2. ESSENCE get picture ready! brightening concealer
10 ivory
Essence products will be available at the end of August, so I haven’t had a chance to see them in person, but as a massive fan of Maybelline’s the Eraser, this caught my eye immediately. The Eraser is so easy to use because of the sponge, so I hope this one is like it as well, since we don’t have Maybelline’s here, though I saw that the applicator isn’t quite the same, as it has a big hole in the middle (Eraser doesn’t). I’ve seen some swatches, but they aren’t much use if the reviewers don’t compare them to other products. They look light enough, but we’ll see.
The primer also caught my attention, since I hear it’s actually quite good and the lightest shade of the compact foundation is also said to be pale, but I need to see these things in person first.
Swatches here (in German).
About 3 €.
3. ESSENCE satin touch blush
20 satin love
I haven’t seen swatches of this yet, but the PR pictures portray it as a similar shade to my favourites (Milani’s Romantic Rose, Catrice Nuts’ About you,..), so I’m interested in it. I’m not the biggest fan of Essence blushes, but it might surprise me.
2.49 €
4. CATRICE Glam & Doll Super Black Liner
I’m a sucker for liquid eyeliners and this one looked like it has a very precise nib when I checked it out, so it might be interesting to try. I haven’t heard much about the formula, though.
Swatch here.
2.99 €
5. CATRICE  Longlasting Lip Pencil
180 All-time Mauvie Star
This one looked like a nice mauve shade in the shop, similar to Essence’s Satin Mauve, which I don’t really like, but I hope this shade has less purple in it. Not sure if  I’ll really get it, but it’s a nice looking shade.
Swatch here.
2.29 €
6. CATRICE Prime And Fine Contouring Duo Stick
01 Lighter Skin
I swatched this in the shop and was so pleasantly surprised with the shade of the contour side. It’s actually taupe and a good shade of taupe. The highlighter didn’t look that special, just a simple shiny champagne shade, but I like cream highlighters, so it might be nice too. I’ll definitely get this.
Swatch here, but I think it’s a bit cooler in real life.
4.69 € 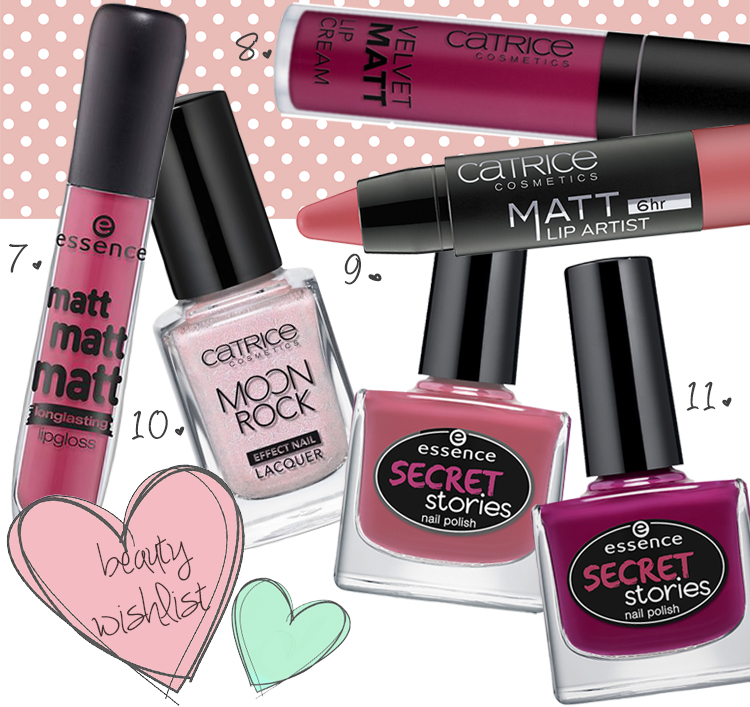 7. ESSENCE mat mat mat longlasting lipgloss
To be fair, since I heard these aren’t actually matte, I’ve lost my enthusiasm about these. Still, I’ll check out the shades in shop and see what they’re like. I liked the original Matte lip creams Essence had (though I’ve found a ton of better ones since) and I strongly disliked the second version (XXL one), I hear the new ones are actually the same as the second version, but we’ll see. The shade range is quite boring and the only shade I’m interested is 03 girl of today.
Found you swatches here (review in German).
2.29 €
8. CATRICE Velvet Matt Lip Cream
These are again allegedly not really matte, but I hear they are at least similar to the original Essence matte formula, but I again have to say that my enthusiasm about these isn’t all that high since I tested a couple on my hand. Shades are again more on the boring side and the only one that I might be interested in is 030 Hazel-Rose Royce. We have these here already, but no testers of all shades yet (I guess they forgot a few. Yay!).
Swatches.
3.79 €
9.  CATRICE Matt 6hr Lip Artist
020 Best Rosebuddies Forever
These on the other hand excited me far more when I tried them in the shop than any new lip products. The shade range is beautiful, I like most of the shades and the formula is nicely creamy, but it does have that creamy-matte finish. I’m tempted to try one, I’m just not sure I’ll end up wearing it much since I love liquid lipsticks so much.
Swatches.
4.99 €
10. CATRICE Moon Rock Effect Nail polish
01 Silky Way
I didn’t notice these much on the press releases, but I loved the look of them in person. All have these interesting effects, mostly with some shimmer, but they’re not full of heavy glitter, they just look like that. I like most of the shades, but Silky Way looks most interesting to me because it’s quite an unusual shade for glitters. The only reason why I’m not so sure if I should buy these is because I dread the removal.
Swatches.
3.29 €
11. ESSENCE secret stories nail polish
01 can you keep my secret & 04 we all have secrets
These instantly caught my eye, though they look like they belong to a collection and are a bit out of place in this update. Two shades are attracted me: the muted pink 01 and the classic Mateja colour 04, which is a pink-purple shade.
Swatches here and here.
1.79 €
By the way, I also checked CATRICE Prime And Fine Multitalent Fixing Spray (4,49 €) and I removed it from my wishlist because I find that the mist isn’t fine enough. But I might change my mind if I read a good review about it.
Anything on your wishlist? Have a great day!